Religious Violence in Indonesia
Shattered Faith in a Peaceful Coexistence

In Indonesia, attacks by the extremist IDF against religious minorities are occurring with greater frequency. But despite religious freedoms enshrined in the constitution, authorities are responding with ambivalence and President Yudhoyono is reacting hesitantly to the latest violence. Anett Keller reports from Jakarta

​​ The latest violent attack on representatives of a religious minority in Indonesia has left the nation in shock. Shortly after a church service on Sunday, 12 September, a leading representative of the Batak Christian Protestant Church (HKBP), Hasian Lumbantoruan Sihombing, was stabbed in the city of Bekasi to the east of Jakarta. Sihombing had to be treated at the intensive care unit.

Pastor Luspida Simanjuntak, who tried to rush to his aid, was attacked with sticks by the assailants and sustained minor injuries. The police, who apparently did not manage to protect the victims at the attack site, have meanwhile detained 10 suspects, among them Murhali Barda, the leader of the radical Islamic Defender Front (FPI) in Bekasi.

These are the latest in a series of worrying attacks on religious minorities that is currently undermining the faith that many Indonesians have in their traditional and constitutionally pluralist homeland.

Between January and July of this year alone, the Setara Institute for Democracy and Peace recorded 28 attacks by primarily radical Muslim groups on Christians – as opposed to 17 in the year 2008 and 18 in 2009. Most of these attacks took place in Jakarta and several cities in West Java.

In Bekasi, the FPI is trying to bring about the introduction of Sharia law, and threatens to persecute Christians until what it terms the "Christianisation" comes to an end. Occasionally utilising violent means, the FPI and other hardline groups have repeatedly barred members of the HKBP from accessing a church that has been sealed off by authorities in a dispute over building permission.

The fact that the FPI's radical Islamists conduct themselves in the manner of a substitute police force is nothing new in and around Jakarta, and it is not the first time that their backs are covered by politics and the justice system. 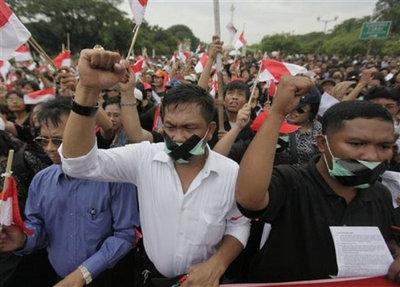 Indonesian Christians demonstrate in Jakarta against the increasing incidence of religious violence, most of which occurs in West Java

​​ In mid-August, the FPI launched a hunt for Erwin Armada, the former chief editor of the Indonesian edition of Playboy, a publication that has since been shelved – a story they knew would receive extensive media coverage. Armada had previously been sentenced to two years in prison by the Supreme Court, which found him guilty of public indecency, despite the fact that the Indonesian Playboy did not contain a single nude photograph, and despite the fact that there are numerous Indonesian magazines on the market that are considerably more revealing.

Commenting on the FPI's hounding of journalists, a state prosecutor in Jakarta was quoted in local media as saying: "It's our aim to act quickly. If our friends from the FPI want to help us do this, we're grateful."

Threats against Christians and Ahmadis

The Governor of Jakarta Fauzi Bowo hit the headlines in early August with a similar take on "administrative cooperation", when he called on the FPI to help provide the security that Muslims required for the fulfilment of their religious obligations. Many viewed this is giving the FPI carte blanche to continue their usual raids on cafés and night clubs.

And then, in the middle of the fasting month, Indonesia's Minister of Religious Affairs Suryadharma Ali, chairman of Indonesia's second-largest Islamic party the PPP, made a public call to ban the Ahmadiyya, an Islamic movement repeatedly singled out for persecution. The minister justified his proposal by saying that banning the sect "would protect its members from attacks and would help it to find its way into mainstream Islam". In the eyes of the well-known columnist Julia Suryakusuma, this was tantamount to giving the FPI "the licence to kill."

In Bekasi, after members of the HKBP were yet again attacked by a violent mob, mayor Mochtar Muhammad suggested to the church that services could be held in an alternative building for the time being. "We would make a building available to the church as a provisional measure, while its new place of worship is under construction. We will guarantee their security," says Muhammad.

But church representatives say they have little faith in such pledges, as another HKBP community in Bekasi accepted exactly the same proposal from city authorities – and is still being threatened by hardliners.

Discrimination in the building of places of worship

Following a joint decree issued in 2006 by the Interior Ministry and the Ministry of Religious Affairs, building permits for places of worship have to be recommended by provincial religious authorities as well as by a local inter-religious forum, before the city administration can authorise them. 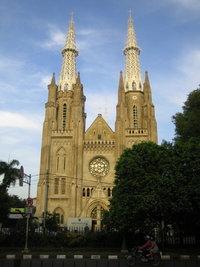 It is not only Christians experiencing religious persecution in Indonesia; members of the Ahmadiyya community are also threatened and hounded by extremists

​​ Critics of the decree say it contravenes religious freedom as it is enshrined in the constitution, and are issuing renewed calls to have it revised to avoid a majority dictatorship. For Ismail Hasani, a researcher at the Setara Institute, the clauses of the decree are "not practicable and highly discriminative of minority religions".

According to Yuna Farhan, General Secretary of the Indonesian Forum for Budget Transparency (Fitra), part of the problem is that the government always waits for something to happen before it reacts. As Farhan told the Jakarta Globe newspaper, too much of the religious affairs' ministry budget is being spent on post-conflict programmes, and too little on prevention. Farhan says it is ironic that although it receives the fourth largest governmental budget, the ministry is not able to prevent religious conflict.

Criticism of President Susilo Bambang Yudhoyono, who remained silent for months over the attacks, is also growing more vociferous. On 13 September, in an online petition "For the safeguarding of the practice of religion according to one's respective faith" 29 initial signatories – celebrities of varying religious backgrounds – reminded the Indonesian President of the fact that the Indonesian constitution guarantees the right to free religious practice.

The petition calls on Yudhoyono to "take serious steps" to implement the official guarantee of religious freedom that he chose to underline during his election campaign and in his most recent address to the nation. The document was signed by a further 12,000 people in the first five days.

The petition says the president himself must lead "as a primary, and sensitive protagonist" an inter-faith dialogue within the country itself, before he addresses religious questions on an international level – a reference to his latest statement: in a letter to US President Barack Obama, Yudhoyono called on him to stop the Koran burning planned for 11 September by the pastor Terry Jones.

Yudhoyono has in the meantime responded to growing public pressure. He publicly called the latest act of violence against the HKBP a "sensitive and serious problem" and made it plain: "There is no place here for violence, for no one. Especially when it concerns relations between the religions."

He could have heightened the public impact of this stance by visiting the injured church leaders in hospital, but he chose not to do this. 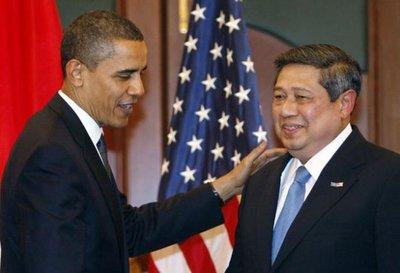 Presidential swap between the US and Indonesia? The Indonesian President has come in for some heavy media criticism for his cautious stance

​​ Above all in comparison with US President Barack Obama and his actions in the row over plans to construct a mosque close to Ground Zero – a story that has been followed with great interest by Indonesian media – President Yudhoyono, who is so hesitant to make any decisive statements in his own country, cuts a very poor figure.

So poor in fact that Endy Bayuni, editor-in-chief of the daily Jakarta Post, recently proposed introducing a solution from the world of soccer, and simply swapping Obama for Yudhoyono. Bayuni wisecracked that from a practical point of view this would be quite straightforward. After all, having attended school in Jakarta for several years, Obama is already familiar with the country, and Yudhoyono once described the United States as his second home.

Hizb ut-Tahrir in Indonesia
The Caliphate as an Extension of Democracy?
The extremist organisation Hizb ut-Tahrir rejects both democracy and the existence of the nation state. A conference, held recently in Jakarta, showed that representatives of moderate Muslim organisations were reluctant to take clear positions on the issue. By Bettina David

Inter-Faith Studies in Indonesia
Patient Bridge-Builders
The Indonesian Consortium for Religious Studies brings together students from a Muslim, Christian and secular university and promotes dialogue with members of other faiths and non-believers. Anett Keller reports from Yogyakarta

END_OF_DOCUMENT_TOKEN_TO_BE_REPLACED
Social media
and networks
Subscribe to our
newsletter