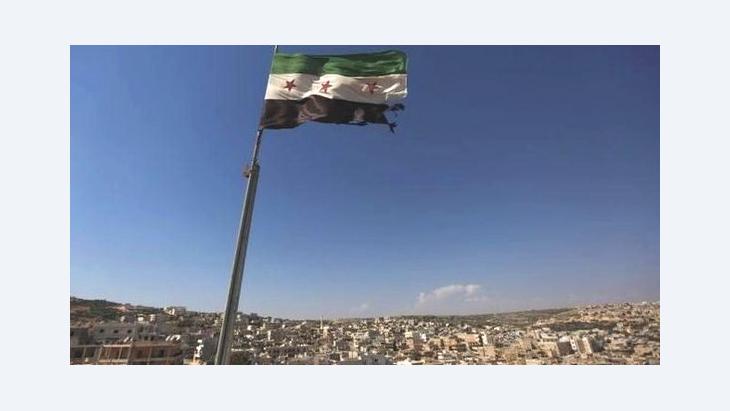 Report from the Battle Zone of Aleppo

Too Much Trust in God

﻿For weeks, the rebels and the Syrian army have been fighting for control of Aleppo, the strategically important trade capital in the north of Syria. Suffering most under the violence in the embattled city is the civilian population. Peter Steinbach reports from Aleppo

﻿Quiet reigns in the Salaheddine quarter, if only for a few hours. Here and there, sporadic shots can be heard. Some of the residents use the opportunity to search for belongings in the rubble of their destroyed homes. Drones and combat aircraft circle overhead, but for once do not launch an attack.

The silence lying over the city of Aleppo, the focus of heated battles for the last three weeks, is unusual. The rebels use the breather to bring new fighters into position and to replenish their dwindling stores of ammunition.

The goal of the Free Syrian Army (FSA) is to win back lost territory. The regime troops of President Bashar Assad have pushed the rebels to the outskirts of Salaheddine. "Strangely, they didn't advance any further though", says Ahmed, an activist in the opposition. "Instead, they positioned snipers in buildings and on rooftops. They can therefore survey and control the area." 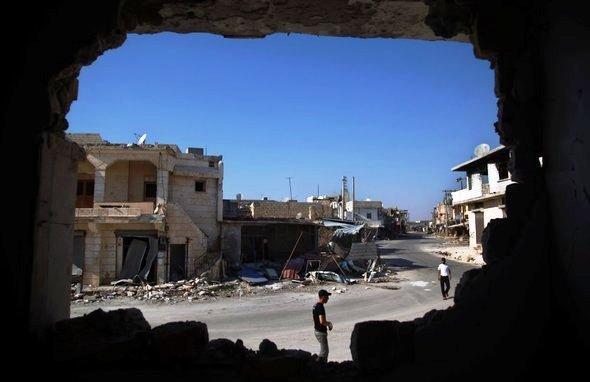 The battle zone expands: Government troops have intensified their attacks on the rebels in Aleppo. Syrian human rights observers report that they have launched assaults on several city districts and are receiving constant reinforcements in preparation for an even bigger attack

​​The district in the south-western part of Syria's business metropolis has great strategic as well as symbolic importance. When the FSA occupied parts of Aleppo on 20 July, the various rebel militias came together in Salaheddine. They founded the "Union of Unity" and concentrated most of their fighters there.

It's no wonder, then, that the Syrian army has pinpointed this neighbourhood for its offensive. For them, it is the lynchpin for taking back the industrial city of Aleppo from the hands of the "terrorists and foreign fighters".

Constantly in the line of fire

At first only a menacing buzz is heard, and a swirling brown dot is seen approaching in the sky. Then comes a deep roar as the plane tilts its nose downward and swoops past at low altitude. A few seconds later the Russian-made Sukhoi ground attack aircraft fires a round out of its 23 mm cannons and ascends into the sky again. The ammunition, which explodes on impact, rips off the facade of a shop and destroys the living quarters on the first floor.

"The bombing attacks by the Syrian air force are the hardest part for us", says Abu Ali, a rebel commander who fought with his battalion in Salaheddine for days on end. The 25-year-old is now recovering in Azaz, approximately 45 kilometres from Aleppo.

Azaz is one of towns along Syria's border with Turkey that is now in the hands of the insurgents. Abu Ali has an injured leg, caused by a fragment from an armour-piercing shell. But that's the least reason why he is now at home. Although he can only walk with the help of crutches, he plans to soon return to the front to lead his battalion with a handheld radio.

Certain of victory – with or without weapons

In his home town of Azaz, the young commander is a hero who is joyously welcomed and kissed by all. One notices how much the 25-year-old identifies with and enjoys this role. "We don't need more fighters", Abu Ali asserts, "we need more weapons to win the war. Anti-tank weapons, to take apart the T-82, but above all anti-aircraft artillery to ward off the planes and helicopters." Then the rebels would without doubt win the war, he says. 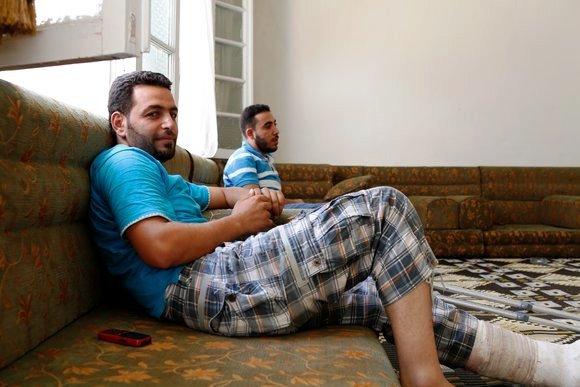 Revered as a hero in his hometown of Azaz: Despite his war injuries, rebel commander Abu Ali is still active, giving his battalion orders by radio

​​For most of the inhabitants of Azaz and other towns and villages in rebel territory, it goes without saying that the insurgents will prevail in the end. With or without new weapons. "We can only win," shouts a woman who has lost her three sons as martyrs to the civil war. "We have Islam on our side and the regime has no religion." For her, that means losing is impossible.

In this arch-conservative region, Islam plays an important role in the revolution. Their trust in God provides motivation for the fighters, and religion presents a positive counter-model to the demonic Assad regime. "I don't need a bullet-proof vest", says Diab, a young FSA man, and beats his fist against his chest several times. "Allah will repel the bullets. And when my time comes, I will go to paradise as a martyr."

As he says this, Diab spreads both hands and raises them to the sky. One might say that the rebels trust in God a bit too much when they go to the front as if they were invulnerable. Like Abulabed for example, who drove a taxi before he joined the revolution. He plants himself in the middle of the road and points a finger up at the sky, shouting: "No problem!" But a ground attack aircraft is circling above his head, the rebel headquarters of Aleppo in its sights.

It can descend and start firing at any moment. This time, everything goes well. Abulabed smiles: "God is on our side." The next day, however, Allah deserts him. Abulabed is shot dead.

On the Turkish side of the border, there are rumours that heavy modern artillery has arrived. "It is only a matter of time before they are used in Syria", assures Abu Zaid, an opposition activist in Antakya.

The ancient Roman city once known as Antioch is an FSA base. From here, the supply of ammunition and fighters to Aleppo is organised, the wounded are treated in secret hospitals, and fighters take holidays from the war. Turkey gives the FSA license to do as it pleases, and the country's intelligence service even helps smuggle weapons across the border.

A command centre has been set up in Adana – in cooperation with Saudi Arabia and Qatar. The two Gulf States are the main sponsors of the insurgents, supporting them both financially and with arms deliveries. Not all of the money and weapons end up in the hands of the FSA, however. 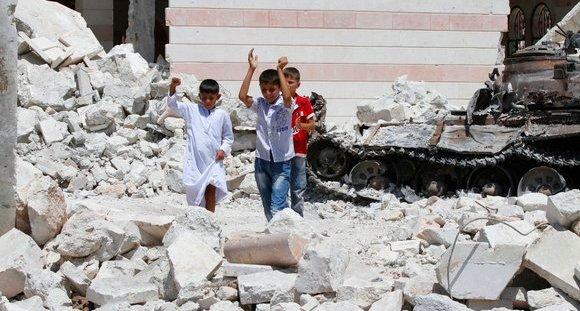 ​​"The Saudis prefer to give their money to the Muslim Brotherhood", says a rebel who wishes to remain unnamed because he is entrusted with the task of acquiring weapons and funding. "And the Muslim Brothers are not participating at all in the fight against Assad." They have sleeper battalions, he says, which they will only call into action once the revolution is over. "Then they will fight against us, the FSA."

The region around Antakya is the destination of thousands of new refugees from Aleppo. In the first two weeks after the rebel occupation, hardly anyone left the city. Now that the regime forces have stepped up their offensive, however, people throughout the city are packing to go. Families try to load all their belongings onto the platforms of small trucks. Lamps, furniture, carpets, crockery, mattresses and even the gas canisters from the kitchen cooker.

Those who have no wheels available drag heavy bags around with them. The father staggering under the weight of his load, the mother holding a baby in her arms and grasping her child's hand. Looking for a bus taxi that will take them away from here as quickly as possible.

In the wake of the war

Since the beginning of the 17-month civil war, the residents of Aleppo had largely been able to lead a normal life. There were only a few small street protests. The industrial city was regarded as a bastion of the regime in Damascus.

But the peaceful interlude came to an abrupt end when the FSA invaded the town. Food became scarce and went up to five times the former price. People now have to queue up for hours for a loaf of bread, power outages are frequent, and petrol is only available on the black market, at exorbitant prices. Many people are angry at the FSA and the war they brought to Aleppo. "Of course I want freedom, but not in this way", explains an older shop owner. He is one of the few whose shop is still open these days.

The brief respite in Aleppo is suddenly over. Salaheddine sees more heavy combat. The Syrian army shells the neighbouring district of Saif al-Dawla with heavy artillery, along with the Bustan al-Qasr and Al-Masharaqa neighbourhoods to the west.

"The army is trying with all the means at its disposal to drive us out of this part of Aleppo", says Abu Ali, the wounded commander from Azaz. He evidently won't be staying home for long. Soon he will be standing in Salaheddine again on his crutches and giving instructions his battalion over the radio.

As a consequence of the coronavirus pandemic, the Osnabruck Morgenland Festival took place via YouTube for the first time – transporting us to new cultural regions through music. ... END_OF_DOCUMENT_TOKEN_TO_BE_REPLACED

Twelve million Syrians are dependent on humanitarian aid, a sombre figure that conceals much suffering and high costs, of which Europe bears 80%. With an aid shortfall looming, ... END_OF_DOCUMENT_TOKEN_TO_BE_REPLACED

In the age of corona, Ankara's regional power strategy is twofold: on the one hand, Turkey is engaged in a charm offensive to revamp its political image, which has suffered lately ... END_OF_DOCUMENT_TOKEN_TO_BE_REPLACED

From Syrian war crimes to U.S. hypocrisy in the Julian Assange case, the global "erosion of human rights standards" is of critical concern, UN Special Rapporteur on Torture Nils ... END_OF_DOCUMENT_TOKEN_TO_BE_REPLACED

A heated debate is raging in the Islamic world about whether the religious and political spheres in Islam are one and the same. Before this matter can be settled, the terms " ... END_OF_DOCUMENT_TOKEN_TO_BE_REPLACED

END_OF_DOCUMENT_TOKEN_TO_BE_REPLACED
Social media
and networks
Subscribe to our
newsletter