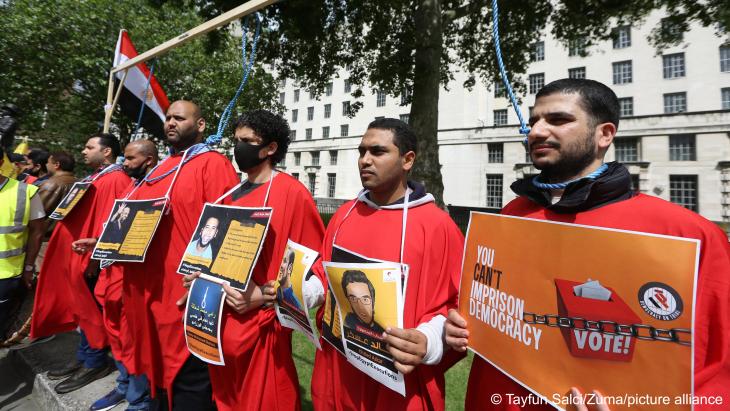 Since President Abdul Fattah al-Sisi seized power in Egypt in 2013, he has ruled the country with an iron fist. Civil society, opposition and free press struggle to survive. Tens of thousands of political prisoners, including at least 24 media professionals, are behind bars. Sofian Philip Naceur reports

Abdul Fattah al-Sisi, a former top general, likes to showcase his country as an anchor of stability and a regional power of political and military relevance. He also points to a booming economy offering great prospects for multi-national corporations. This is the picture he once more tried to paint when visiting Brussels for the African Union-EU summit in February 2022.

However, Egypt’s dictator encountered considerable headwind in the EU capital. Human rights groups seized the opportunity to protest against his regime’s civil rights abuses. Moreover, their fierce criticism was echoed by members of the European parliament and even government officials.

In early February, 175 members of various European parliaments appealed to the UN Human Rights Council. They asked it to step up pressure on Egypt’s regime to stop systematically violating fundamental rights. Annalena Baerbock, Germany’s foreign minister, later announced Germany would make future arms exports to Egypt dependent on the human rights situation. Human rights organisations called on the EU Commission not to roll out the red carpet for Sisi in Brussels, demanding instead that Egypt’s human rights crisis should be put on the agenda.

The non-governmental Committee to Protect Journalists (CPJ) used President Sisi’s visit to Brussels to appeal to the EU Commission to stop business as usual with Egypt. "Sisi has systematically attacked the press, imprisoned journalists and silenced critical voices", the CPJ stated. 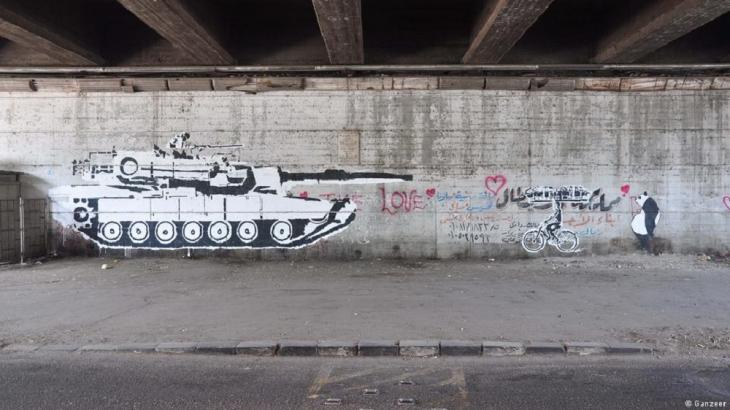 Worse than under Mubarak – Sisi's "draconian legislative arsenal": the Anti-Terrorism Law prevents journalists from disseminating anything but official information about terrorist attacks. Violators face legal action and risk hefty prison sentences. The Cybercrime Law compels telecommunication companies to store user data for 180 days, while the Media Law regulates the licensing of press organs. It also paved the way for the establishment of the Supreme Council for Media Regulation, a body that allows the regime to manipulate Egypt’s media landscape at will

These are indeed testing times for Egyptian media and journalists who dare to criticise their government. In 2021, the country ranked 166th out of 180 nations in the World Press Freedom Index, which is compiled annually by the international NGO Reporters Without Borders (RSF). According to RSF, 22 journalists and two citizen reporters are currently behind bars in Egypt. This makes the country "one of the world’s biggest jailers of journalists". The number of imprisoned media professionals is higher in only three countries: Saudi Arabia, China and Myanmar.

Journalists and media professionals are arrested, tried and sentenced for government-critical reporting. Compounding the problem, many become victims of arbitrary processes based on vaguely formulated laws and accusations. At the end of 2021, reporters Hisham Fouad and Hossam Moanis were sentenced to four years in prison by a Cairo court for "spreading false news in Egypt and abroad". When Fouad was arrested in Cairo in 2019, he was initially accused of "economic conspiracy" and even "terrorism". Egyptian law enforcement often uses terrorism charges to silence critical voices.

According to RSF, Egypt now has a "draconian legislative arsenal" that limits media freedom in the country. The 2015 Anti-Terrorism Law is an example. It prevents journalists from disseminating anything but official information about terrorist attacks. Violators face legal action under the Anti-Terrorism Law and risk hefty prison sentences.

In 2018, the government enacted two more pieces of legislation that hugely restrict free speech and press freedom. The Cybercrime Law compels telecommunication companies to store user data for 180 days, while the Media Law regulates the licensing of press organs and paved the way for the establishment of the Supreme Council for Media Regulation, a body wholly controlled by the executive. It allows the regime to manipulate Egypt’s media landscape at will. Significantly, the Council is based in the Maspero television building in downtown Cairo, where the state broadcasting company also has its headquarters.

Bringing the media into line

With these and other laws, the regime has created an environment in which Egypt’s media are legally compelled to toe the government line. This system is remarkably effective. Even under Hosni Mubarak, the long-term dictator who was overthrown in 2011, public reporting was never subject to the degree of state control that is exercised today. 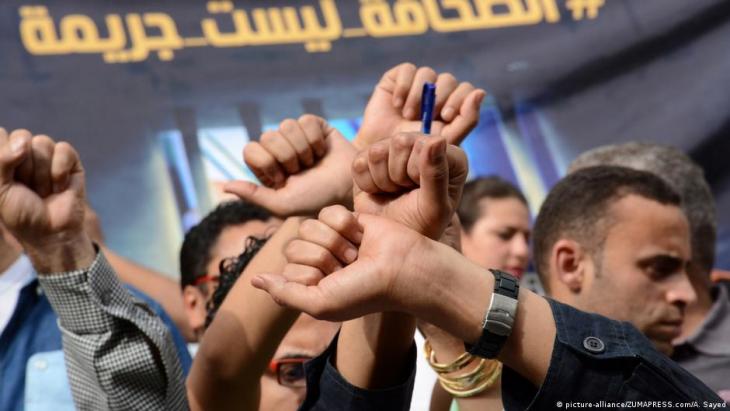 Online surveillance: in 2017, Egyptian authorities began blocking Internet content critical of the government. Since then, domestic access to at least 500 websites has been blocked, including prominent news and NGO websites. What's more, government-critical content on the Internet is not simply blocked. The security apparatus documents related items and uses them for criminal prosecutions. In recent years, countless people have been arrested and taken to court for criticising the regime or expressing unwelcome opinions on social media

It was risky to criticise the government in the Mubarak years, but private media companies had far more leeway – as long as their reporting was largely in the regime’s interest. Sisi, by contrast, relies on direct control of the press. He has systematically extended state influence even in private media companies.

Businessmen and politicians have been forced to sell their stakes in TV networks and newspapers. Some had to withdraw from media business entirely. Companies associated with the foreign intelligence agency GIS (General Intelligence Service) took over their shares. In 2016, steel tycoon Ahmed Abou Hashima – a businessman close to the regime – started buying up newspapers and television networks for his holding company called the Egyptian Media Group (EMG). Shortly afterwards, Abou Hashima’s shares in EMG were transferred to Eagle Capital, an investment firm which belongs to the GIS. This was revealed by Mada Masr, an independent Egyptian news platform in 2017.

EMG owns the popular TV networks ONTV and CBS, six newspapers, two movie and television production companie s, as well as seven marketing and advertising agencies. In addition to the state broadcaster, Sisi’s regime thus controls important components of private-sector media. It uses its media power to disseminate pro-government narratives and propaganda. The acquisition of television-production companies, in particular, was central to Sisi’s efforts to breathe new life into Egypt’s run-down film industry. His aim was to harness it for political purposes. ONTV and other broadcasters now release one glossy TV production after another, flooding screens and social media with pro-government propaganda.

As the state thus dominates the conventional media sector, the Internet is now the only space where free speech is still possible. Yet even this space is shrinking. In 2017, Egyptian authorities began blocking Internet content critical of the government. Since then, domestic access to at least 500 websites has been blocked, including prominent news and NGO websites.

What's more, government-critical content on the Internet is not simply blocked. The security apparatus documents related items and uses them for criminal prosecutions. In recent years, countless people have been arrested and taken to court for criticising the regime or expressing unwelcome opinions on social media.

Sofian Philip Naceur works as a project manager for the Rosa Luxemburg Foundation in Tunis and as a freelance journalist.

Tourists have been returning to Tunisia, Egypt and Morocco. But, given the global uncertainty caused by the Ukraine war, will the comeback be enough to save a struggling sector, ... END_OF_DOCUMENT_TOKEN_TO_BE_REPLACED

In this essay, renowned Lebanese journalist and writer Hazem Saghieh asks whether the Arab Levant, which stretches from Iraq in the East to Egypt in the West, will remain an ... END_OF_DOCUMENT_TOKEN_TO_BE_REPLACED

By 2050, the Middle East and North Africa could be dealing with many more elderly people suffering from dementia. A lack of facilities, specialists and local knowledge means the ... END_OF_DOCUMENT_TOKEN_TO_BE_REPLACED

With his fist bump greeting for a man he previously called a pariah, US President Biden has paved the way for Saudi Crown Prince Mohammed bin Salman's return to the international ... END_OF_DOCUMENT_TOKEN_TO_BE_REPLACED

Foresight is needed to turn the tide of German policy. Being independent of Russia must not lead to dependence on authoritarian regimes in the Middle East. By Kristin Helberg END_OF_DOCUMENT_TOKEN_TO_BE_REPLACED
Author:
Sofian Philip Naceur
Date:
Mail:
Send via mail

END_OF_DOCUMENT_TOKEN_TO_BE_REPLACED
Social media
and networks
Subscribe to our
newsletter