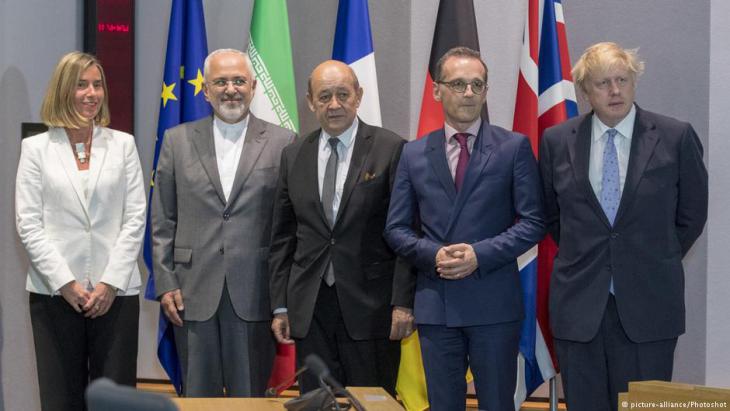 Rescuing the nuclear deal with Iran
Europe should negotiate without the U.S.

After Donald Trumpʹs breach of the nuclear agreement with Iran, Germany, France and Great Britain should negotiate a comprehensive security framework with Iran based on the existing agreement, says Volker Perthes

The decision by U.S. president Donald Trump to break the nuclear agreement (JCPOA) with Iran is an outright challenge to the international community of states and particularly to Americaʹs European partners.

For perspective, the present split is not just another disagreement between transatlantic allies, as the dispute over the 2003 Iraq invasion was, for example. At that time, U.S. policy also created harsh divisions on the European side, not least between the United Kingdom on one side, Germany and France on the other. This time, the UK, France and Germany, have maintained a common approach in confronting what they see as the major blunder of the Trump presidency so far.

Nor is this confrontation just a dispute about policies. Instead, Donald Trump has made a statement on his attitude to international law per se. He has broken an agreement that has been negotiated together with the E-3, the EU foreign policy chief, Russia and China. And he has done so after rejecting the E-3ʹs offers to find a bridging position. Trump has thus opened a rift between the U.S. and its European allies that it is unlikely to close again as long as he is in office.

Not a perfect agreement, but a major diplomatic success

The EU and especially the E-3, are now facing a trilemma: first, the Europeans have to take the lead to preserve the JCPOA, as the Iran deal is formally known. In this, they will have little help from either the U.S. or Iran. Iranʹs political elite is divided over the virtues of the agreement. Those who wholeheartedly defend it, i.e. President Rouhani and his team, have been weakened by the U.S. withdrawal.

Nonetheless, the E-3 should persist. They never claimed that the JCPOA is a perfect agreement, only that it has been successful at its state objective: to limit and reduce Iranʹs nuclear activities. The second part of the trilemma is that France, Germany and Britain cannot simply change course and co-ordinate further moves with the other international parties to the agreement, i.e. Russia and China. 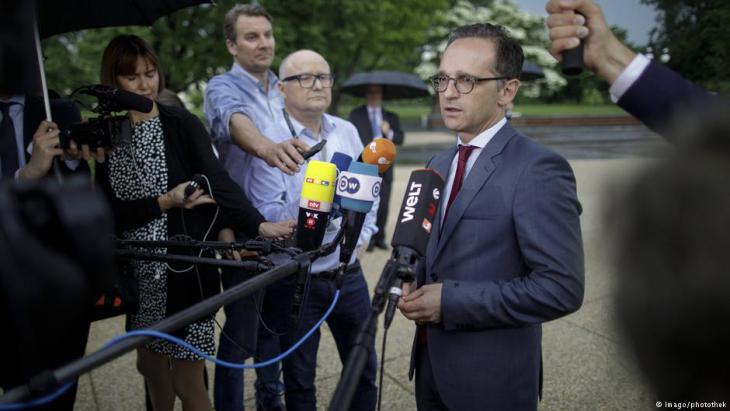 Maas reaffirms EU position on the JCPOA: during his most recent visit to Washington, German Foreign Minister Heiko Maas voiced his strong support for the preservation of the nuclear agreement with Iran. As expected, however, his appeals made little headway with John Bolton, his counterpart at the White House

This would likely only increase mistrust, paranoia and fury vis-a-vis the Europeans on the side of the U.S. president and some of his major aides. The third problem, in a devious irony, is that Washington is now not only undermining the agreement (by re-imposing sanctions on Iran and on European companies) but also holding Europe responsible for maintaining the main achievements of the agreement, notably the aforesaid limitations on Iranʹs nuclear programme and continued IAEA inspections.

Re-negotiations would be absurd

So, what can and should the Europeans do?

The E-3 should certainly not wait for the United States and its self-declared master of deal-making. Any suggestion that the JCPOA itself could be re-negotiated is absurd. The JCPOA is essentially an arms-control agreement and as such a compromise: Good enough for both sides for the time being, but far from perfect for either side.

Re-negotiating it would require the common will of all parties. But Russia and China arenʹt interested; and Iran would lose face if it suddenly appeared to accept under pressure what it consistently has declared unacceptable. So it wonʹt happen. Easier to imagine is a new round of talks that could eventually lead to a comprehensive security agreement with Iran. Such an agreement would not replace, but build upon, the JCPOA. It would have to come into effect by 2025 at the latest. That is when the first sunset clauses expire in the current JCPOA – the limitations on the quality and quantity of enrichment. This new deal will have to go further: It needs to include longer-term arrangements for the nuclear aspects dealt with in the JCPOA, but also to address arms control in the region more broadly, especially the production of ballistic missiles and their transfer to non-state actors such as Hezbollah. 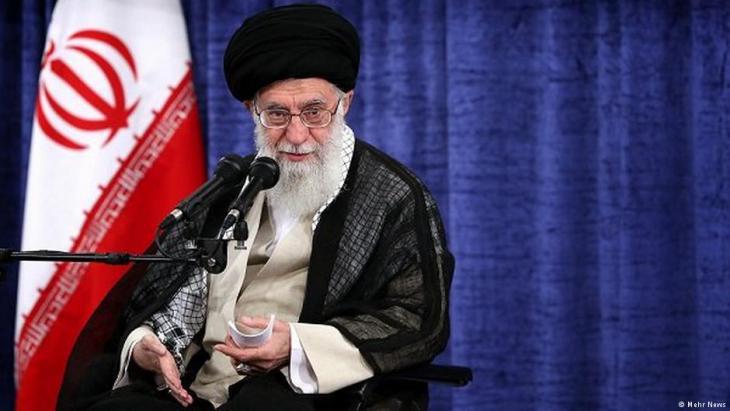 Khameneiʹs conditions for remaining in the nuclear agreement: Europe needs to guarantee that Iran will continue to be able to sell its oil. Should the U.S. cap Iranian oil exports, it will be up to the Europeans to buy the oil. The Supreme Leader of Iran also expects "smooth transactions" with European banks in future

Will Tehran be open to such negotiations? I donʹt know, but I think it might be. And it will most likely be prepared to at least explore options for such a broader deal. In the past it was Iran which repeatedly wanted to widen the subject of the "nuclear" negotiations to include other regional issues, while Washington and the Europeans wanted to limit the talks to the nuclear dimensions (such as the enrichment of uranium and the use of heavy-water reactors).

A way out of the impasse

Talks about regional security and arms control could thus provide a way out of the current impasse. It goes without saying that such negotiations will never be about a Western agenda alone: once you discuss regional issues with Iran, you will have to accept that Iran would also bring its interests to the table. And once regional subjects are discussed with Iran, the Arab neighbours in the Persian Gulf will legitimately insist on being involved. This is a diplomatic challenge, but none that is insurmountable.

Eventually, the United States will have to become part of such talks and any agreement that results. Given Washingtonʹs current absence from the diplomatic scene, Germany, France and the United Kingdom should revert to their approach between 2003 and 2006, by leading the diplomatic push until the U.S. is ready to join. This will certainly only be after Trumpʹs presidency. The good news is that the limitations on Iranʹs nuclear programme under the JCPOA will not have expired before that.

Volker Perthes has been Director of the Stiftung Wissenschaft und Politik (SWP) in Berlin since 2005. His research areas include Germany's foreign and security policy challenges and the upheavals in the Middle East. He is on the staff of the UN Special Representative for Syria, Staffan de Mistura. Perthesʹ most recent book, "The End of the Middle East as we know it", is published by Suhrkamp.

As the Western world emerges from a holiday season made less festive by COVID-19, millions of children in Afghanistan are starting 2022 facing the prospect of famine, illness, and ... END_OF_DOCUMENT_TOKEN_TO_BE_REPLACED

At a time when even some rich democracies are electing con men as their political leaders, the success of Indonesian President Joko Widodo deserves wider acclaim and appreciation ... END_OF_DOCUMENT_TOKEN_TO_BE_REPLACED

With authoritarianism once more gaining ground in the Middle East and North Africa, the European Council on Foreign Relations explores how European diplomats can be more effective ... END_OF_DOCUMENT_TOKEN_TO_BE_REPLACED

China to the east, Russia to the north, Afghanistan to the south: in this geopolitical environment, Kyrgyzstan, which has been independent since 1991, is attempting to make ... END_OF_DOCUMENT_TOKEN_TO_BE_REPLACED

The Taliban’s victory over the United States in Afghanistan will not only greatly embolden their fellow jihadists, but also shake up the region’s geopolitics. An Afghanistan- ... END_OF_DOCUMENT_TOKEN_TO_BE_REPLACED

The world must take action now to prevent a deep and lasting humanitarian crisis in Afghanistan. But what, if anything, can be done? The one billion dollars pledged by ... END_OF_DOCUMENT_TOKEN_TO_BE_REPLACED
Author:
Volker Perthes
Date:
Mail:
Send via mail

END_OF_DOCUMENT_TOKEN_TO_BE_REPLACED
Social media
and networks
Subscribe to our
newsletter