The Intifada versus the Mullahs

The public attention being paid to the Iranian government's efforts to build a nuclear program have obscured the violent displacement of hundreds of thousands of Arabic Iranians in the Khuzestan province. By Joseph Croitoru 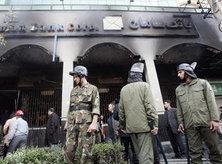 A sign of the Ahwazi's militant resistance against the central government in Tehran? The bombing of a bank in the city center of Ahwaz

​​Until a few years ago, the Arabic population made up the majority of the largely ethnically homogeneous southwestern Iran – especially in the southern part of the oil-rich province of Khuzestan. There are a total of around 4.5 million Iranians of Arabic heritage, which represents just over 5 percent of the Iranian population of 69 million.

Other ethnic minorities in Iran such as the Azeris, Baluchis, Kurds or Turkmens are also subject to discrimination, cultural repression and forced relocations, but the Arab population seems to have been hit the hardest so far.

Since 1999, and particularly in the last few years, more than a million citizens of Arab descent have been forced to relocate from the province of Khuzestan and its capital Ahwaz to various other provinces.

The resettlement of this population is apparently part of a comprehensive plan aimed at the Iranization of this ethnic group and the re-Iranization of the main region in which they previously lived.

The measures undertaken by the government have not only been aimed at breaking up the regional demographic concentration of the minority. They appear to be aimed at systematically replacing the Arabs relocated to other areas with Iranians of Persian descent because greater loyalty is anticipated from the latter.

Considerable effort is being expended presumably because the Khuzestan province, where more than 80 percent of Iran's oil is found, is strategically vital to the national economy.

Arabic human rights activists from the region – those of Arabic heritage generally call themselves "Ahwazis" – say that around one and a half million new settlers, the majority of them Iranian-Persian, have arrived in place of those forced to relocate.

The repressive measures against the Ahwazis in this context were recently described by leading human rights advocate Karim Abdian in a popular Arab-language internet portal based in London named "Elaph," which is known for its critical commentary and sensational revelations.

According to Abdian, the situation of Arabs from Khuzestan is dire. More than 130 activists from the region have been executed during the past year and several thousand have been arrested – among them are families with pregnant women and children. Their property has regularly been confiscated.

Arabs are thus being deprived of their economic base and their homes, and as a result many feel forced to flee. But beyond the material discrimination that has brought unemployment and poverty, the minority is also suffering culturally.

Their language has been prohibited in public in Khuzestan, where many Arabs grow up bilingually, as well as in the regions where they have been resettled. Teaching Arabic has also been prohibited.

Many ethnic Arab children who do not have command of Persian are thus doing poorly in school and often leave before graduating. Only around 30 percent enter high schools that will prepare them for college.

The past year has seen vehement protests against the situation. In addition to peaceful demonstrations, which have been quelled by the police, the newly formed Ahwazi National Liberation Movement has also begun engaging in terrorist activities to attract attention to their cause. The object of their attacks is often the oil refineries, which represent a central pillar of the Iranian economy and thus also the Ayatollah's regime.

The movement's activists, who are currently divided among several different political groups, are trying to call international attention to the issue through internet sites. At the moment they are also defending themselves against accusations by the Iranian state that Ahwazi terrorists are being trained by the British in Jordan.

The Iranian government claims that Saudi Arabia also supports the Ahwazi separatists, an accusation the state is using to propagate the impression of a Sunni-Shiite religious war. In this context Tehran has referred to "Wahhabites" agitating against the state.

In one of the relevant websites posted by ethnic Arabs in Iran under the title "Arabistan," the emergence of a national-religious ethics can be witnessed. Activists who have died for the Ahwazi resistance are being honored as "martyrs of the Intifada against Iran."

Biblical heirs to that region

This seems to represent a parallel to the struggle of the Palestinians, who have claimed to be the descendents of the Canaanites – the natives of Palestine – in opposition to the Israeli occupation's self-understanding as the Biblical heirs to that region.

The cover image of "Eilam" showing an activist with his face covered with a scarf and his fingers raised in a sign of victory recalls the icons of the Palestinian resistance. Here, too, the Intifada is referred to as "blessed."

The use of such imagery would appear to indicate that the Ahwazis are hoping to garner sympathy also beyond the Arabic world.

Citizenship Rights in Iran
One Step Forward, Many More to Take
It was reported late in September 2006 that for the first time in Iranian history an unprecedented law had been passed in the parliament to "offer" Iranian citizenship to children born to Iranian mothers and non-Iranian fathers. Golbarg Bashi reports

END_OF_DOCUMENT_TOKEN_TO_BE_REPLACED
Social media
and networks
Subscribe to our
newsletter