Skip to main content
Restoration of the Old Quarter in Herat

A Race against Time

Germany is providing financial support for the restoration of the Old Quarter in the Afghan city of Herat. The aim is to help the Afghans retrieve some of their lost identity and to create new jobs by funding the conservation of their culture. Britta Petersen reports from Herat

Since the year 2005, comprehensive conservation work has been going on at the Abdullah Ansari shrine in Herat, a building that dates from the Timurid era

​​ The old water-seller with the white beard and the black kohl around his eyes is back sitting where he has always sat, namely at the entrance to the shrine.

"Malang", which roughly translates as Sufi or Islamic mystic, is the term used for people like him in Afghanistan. However, many suspect that these Malangs are nothing more than beggars who shroud themselves in an aura of holiness to live at the expense of others.

The water he sells comes from a well nearby, which is said to have been filled from the holy well of Zamzam in Mecca.

The Malangs, who have traditionally lived at the shrine of the Sufi poet Abdullah Ansari (1006–1088) in Herat, have not had an easy time in recent years. Since the Agha Khan Trust for Culture (AKTC) began restoring the historic site in 2005, they have been forced to move to make way for the builders on a number of occasions.

At the crossroads of different cultures and peoples: for a long time, Herat was home to Persians, Pashtuns, Uzbeks, Turkmens, Balochs and Hazaras

​​ "We had to throw out a lot of people," explains Arash Boostani, the Iranian architect who headed the project until 2008. Now, however, they are back at "Gazurgah", the shrine complex that houses not only the grave of the mystic (one of the most important examples of Timurid architecture in the region), but also other important monuments. The monument, now restored to its former glory, was officially opened again on 7 October 2009.

The restoration of the Gazurgah complex is one of a number of conservation measures in the western Afghan city of Herat that has been funded by the German Foreign Office since 2005.

The aim is to help the Afghans retrieve some of their lost identity by funding the preservation of their culture and to create jobs by rebuilding their cultural landmarks. Since 2002 alone, the German government has provided € 5.3 million for this purpose.

In 2008, work on Bagh-e Babur, an 11-hectare garden facility on the outskirts of Kabul, where the first Mughal emperor Babur lies buried, was completed.

"Were it not for the money from Germany, we wouldn't be able to do any work here," says Jolyon Leslie, CEO of AKTC in Herat. Although the AKTC signed a contract with the Afghan interim government on the restoration of a series of important historical buildings in 2002, it relies on external donations for funding.

In many cases, the work being done is a race against time. Jolyon Leslie, an architect from South Africa, who has been working in Afghanistan in a number of different capacities for over 20 years and speaks fluent Persian, strides along the walls of the citadel of Heart, Qala Ikhtyaruddin, yet another monument Germany is trying to conserve with its funding.

"Do you see that concrete monstrosity over there?" he asks, pointing over the rooftops of the largely intact Old Quarter of Herat. Here and there, modern two-storey houses rise up out of the sea of clay buildings. 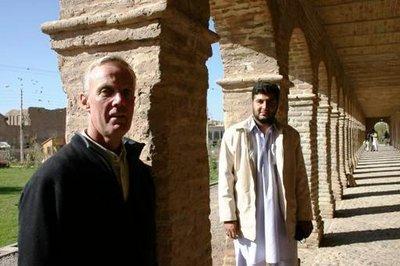 "People are building all over the place, and this is why more historic buildings have been destroyed here in recent years than was the case during the war." - Jolyon Leslie and Ramin Jami of the Aga Khan Trust for Culture

​​ "They've just finished building that," he says angrily. "Even though there is a ban on erecting concrete buildings in the Old Quarter!" Officially, only traditional construction materials such as clay and wood are permitted in this part of town. However, as is the case in many other places around the world, those who have contacts and money can flout Afghanistan's building regulations.

This makes it increasingly difficult to conserve the historic Old Quarter, where the AKTC is restoring historic mosques, private homes, bazaars, and a number of cisterns of architectural importance.

"Unfortunately, Herat is an affluent city," says Leslie. Trade with Iran is lively and brings the city's businessmen good profits. "People are building all over the place, and this is why more historic buildings have been destroyed here in recent years than was the case during the war."

This is an experience shared by the German Archaeological Institute (DAI), which has been active in the city since 2004. In addition to its own excavations, the DAI is helping to set up a National Museum in the citadel, which the AKTC would like to turn into a centre of culture.

A collection of historic finds that was put together shortly after the war by Ismail Khan, the then ruler of the city, comprising mostly ceramic objects was seriously damaged during haulage into the citadel. "Inappropriate transportation," sighs Ute Franke, who is managing the project for the DAI, but is now working at the Museum of Islamic Art in Berlin. Valuable pieces were also stolen.

The rooms in the citadel reserved for the museum are currently locked and bolted because the team of German archaeologists is away and will only return to Herat in the spring of 2010. The restoration workshop with its six workstations, where German experts are training Afghan employees, is finished, but abandoned for the time being. 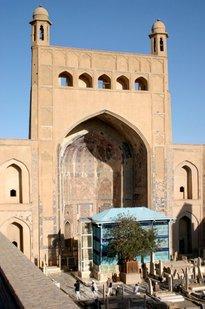 The Ansari shrine houses the tomb of the Sufi mystic and saint Khwajah Abdullah Ansari. The religious building dates from the year 1425

​​ In 2004, the DAI began archaeological research in the region around Herat and proved that the region was settled in prehistoric times. At the citadel – which is said to have been built by Alexander the Great some time around 300 BC, but is in all likelihood older than that – Timurid gates with two towers were unearthed in the northern part of the fortifications.

"Above all, we found ceramic and metal objects from the pre-Timurid era there, primarily from the tenth and eleventh centuries," says Franke. "This makes sense because most monuments in Herat date from the Timurid era."

The finds and the ancient objects found in the region will go on exhibit in the three rooms of the new National Museum in 2010.

Until then, according to Jolyon Leslie, there is the question of how Herat, a city of 600,000 inhabitants, intends to use and manage all of the wonderfully restored historic facilities.

There are plans to turn a cistern into a municipal museum. According to Ute Franke, the DAI would like to help manage the Historical Museum in the citadel. "However, so far there are no archaeologists in Herat," she says.

The AKTC also set up a music school in an old city hall. Unfortunately, however, the school cannot keep itself financially afloat. It is virtually impossible to earn a living playing traditional Afghan instruments like the Rubab in Afghanistan today.

Moreover, ever since the Mujahidin and the Taliban denounced music as 'un-Islamic', respect for the musicians has dwindled. The days in which artists like Ustad Sarahang (1924–1983) – the great interpreter of the poetry of Bedel, whose oil portrait hangs in the school – enjoyed cult status are over.

"We even have to pay our students' travel costs," says Hafeez Hakimi, head of the school, with sadness in his voice. Nevertheless, he is happy that classical music has at least found a new refuge and home.

Other concepts of use are urgently needed for the city's other buildings. Thank goodness for the mosques and tomb monuments! Here, at least, no foreign assistance is needed; for centuries the faithful have been coming here to pray and reflect.

Every Thursday evening, the real Sufis – who do not live off the alms of the faithful – come to the tomb of Abdullah Ansari. These are business people, farmers, and civil servants, who come together to celebrate dhikr, the unity of God and humankind in ritual prayer.

Britta Petersen has been working as a journalist and writer about South Asia for the last eight years. Since 2006 she has been based in New Delhi as a correspondent for the leading German business daily "Financial Times Deutschland".

Afghanistan's Bactrian Gold
An Ancient Heritage of Diversity
A current exhibition in Amsterdam is showing visitors a very different, unfamiliar image of Afghanistan. The 250 archaeological objects on display shine a light on the former glory of Afghanistan's ancient ruling dynasties. Nasim Saber reports

Cairo's Darb Al-Ahmar District
Preserving a Historical Heritage
Cairo's Darb Al-Ahmar district contains some of the finest extant examples of Islamic medieval architecture. Regional, national and international resources are being mobilised to halt the crumbling decay and restore the area to pristine splendour. Nelly Youssef took a walk to see how things are coming along

Interview with Claus-Peter Haase
Archaeology as a Political Issue
Few countries have such a comprehensive knowledge of archaeological treasures from the Islamic world as Germany. Ariana Mirza asked Claus-Peter Haase, director of the Museum of Islamic Art in Berlin, about the opportunities and difficulties involved in working with colleagues from Iran, Iraq, or Syria

END_OF_DOCUMENT_TOKEN_TO_BE_REPLACED
Social media
and networks
Subscribe to our
newsletter 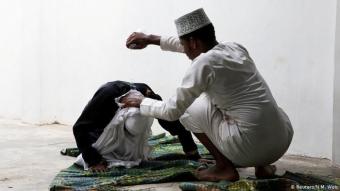