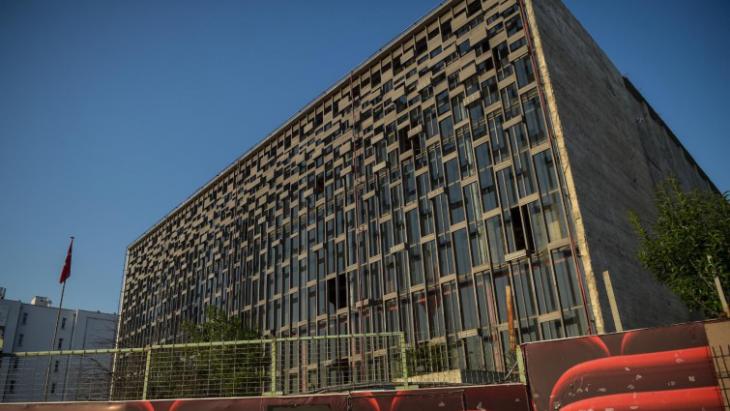 Once the symbol of modern Turkey, now it stands in ruins. The Ataturk Cultural Centre has been abandoned for a decade since its closure in 2008. Amid furious debate about its future, many are unhappy with current plans for the site. By Ceyda Nurtsch

In Istanbul's Taksim Square, in the heart of the metropolis on the Bosporus, a dark concrete skeleton rises ominously, iron bars hanging from its unkempt facade. Glossy posters advertise a glorious future: this 52,000 square metre space will soon host one of the most modern cultural centres in the world containing an opera house, concert halls, cinema and exhibition spaces. The new Ataturk Cultural Centre (AKM) will boast architectural prowess, acoustic superiority, and is set to become a magnet for world-class international stars. That's the plan, anyway.

As the dilapidated AKM awaits its glorious future, its glamorous past is fast fading away, however. Once one of the most modern buildings in Turkey, it was the fourth-largest cultural centre in the world when it opened in 1969.

Formerly a symbol of the modern secular republic

With Verdi and plays by Arthur Miller on the bill, it expressed the lofty western cultural aspirations of the "Kemalist" elites who forwarded the ideology of the secular founders of the Republic of Turkey.

But since the closure in 2008 of the large concrete structure with its prominent glass front, opinions have been bitterly divided about how this great symbol of modern secular Turkey should be reconstructed. Atilla Koc, then Minister of Culture and Tourism of the ruling AKP party, moved to demolish the former opera house. Civic initiatives and architects meanwhile fought to preserve it as an architectural icon. They saw a potential demolition by the governing AKP party, which has increasingly restricted artistic freedom in Turkey, as synonymous with the demise of a once secular nation.

During the Gezi protests in the summer of 2013, demonstrators made the AKM a symbol of resistance to AKP rule. They hung illuminated banners on the facade reading, "We will not bow" and "Tayyip, be quiet" – a reference to reactionary president Recep Tayyip Erdogan – and also occupied the rooftop. 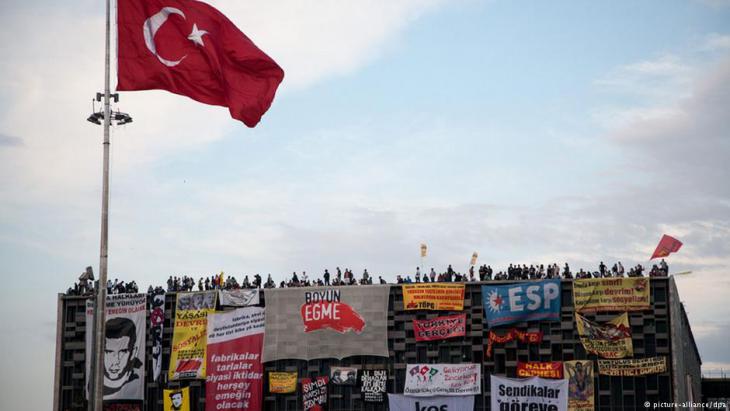 A platform for protest during the Gezi Park demonstrations: protesters turned the AKM into a symbol of resistance to AKP rule. They hung illuminated banners on the facade reading, "We will not bow" and "Tayyip, be quiet" – a reference to reactionary president Recep Tayyip Erdogan – and also occupied the rooftop

In the years that followed, discussions continued as to the fate of the building. Meanwhile, the cracked windows and the crumbling facade of what was once the pride of modern Turkish society became, for some, symbolic of the deterioration of the country.

New AKM: a "recomposition" of the old

Yet when architect Murat Tabanlioglu was commissioned to undertake the massive restoration and expansion of the AKM, it was seen as a victory for those who supported the preservation of the Kemal heritage, since the architect's father, Hayati Tabanlioglu, designed the existing building. When Tabanlioglu presented his vision for the space, it was announced that the core of the former opera house would be preserved and the prominent glass facade reconstructed.

Other characteristic elements will also be brought back to life, including the free-floating aluminium staircase typical of the 1960s which gives the foyer its character.

"We will continue in my father's spirit" said the architect of his "recomposition" of the AKM. However, not everyone finds this pledge convincing. Indignation spread when it was announced that a large red-glass sphere would decorate the entrance.

To many, this element was reminiscent of the cupola of a mosque and is symbolic of how the AKP has increasingly imposed its Islamic religious views on a Turkish nation that was established as a secular state. But Tabanlioglu disagrees with this interpretation: "First of all, red is the colour that I personally associate with opera," he said. "The spherical shape symbolises the semi-circular arrangement of the seats in a concert hall that generates the best acoustics." Tabanlioglu was first and foremost inspired by the "total theatre" concept of Bauhaus architect, Walter Gropius.

After being left to decay for 10 years, a revamped version of Istanbul's Cultural Centre is to reopen in 2020. Many opposed the demolition of the building symbolising Ataturk's modernist vision of Turkey. By Ceyda Nurtsch 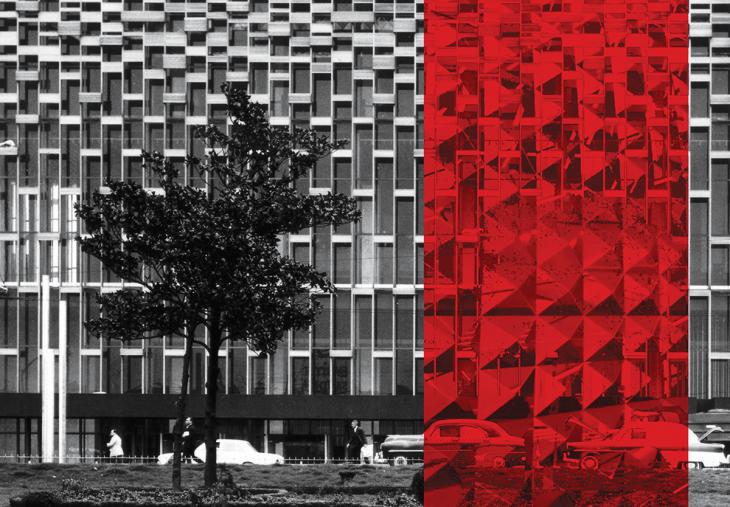 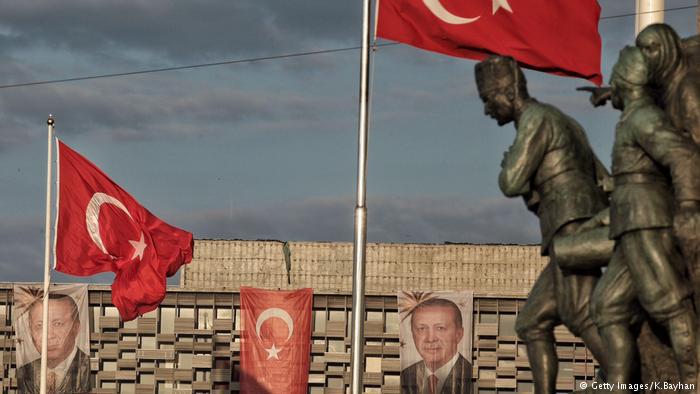 Renewing pride: located right on Istanbul's Taksim Square, a central transportation hub and popular tourist spot on the European side of the Bosporus, the Ataturk Cultural Centre (AKM) used to be the pride of the Turkish Republic. It had been left to decay since 2008, but will finally get a makeover 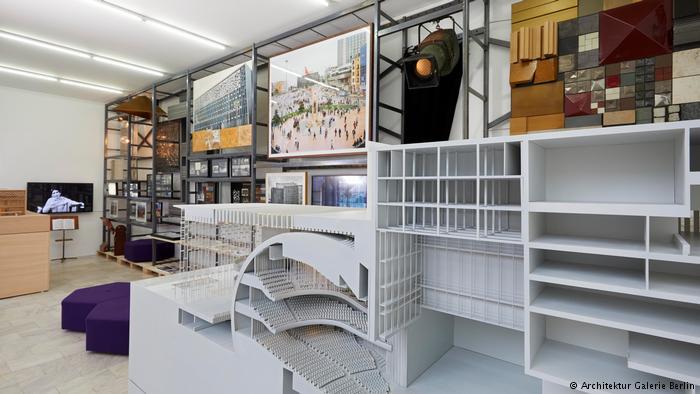 A world-class venue: at the Architektur Galerie Berlin, architect Murat Tabanlioglu presented his model of the new AKM. A revived cultural icon for Istanbul, the venue's architecture and acoustics aim to attract world-class artists 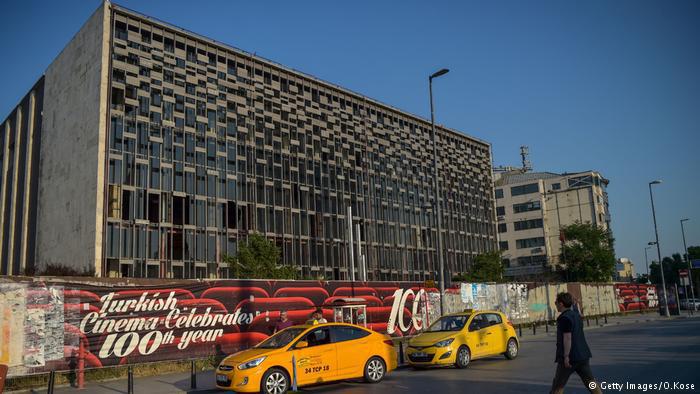 From father to son: the original AKM was designed by Murat Tabanioglu's father, Hayati Tabanlioglu. It opened in 1969 with a performance of Verdi's Aida. At the time, it was the fourth-largest opera house in the world. It had to close for renovations after a fire in 1970 and reopened in 1978 before it was shuttered in 2008 and essentially became derelict 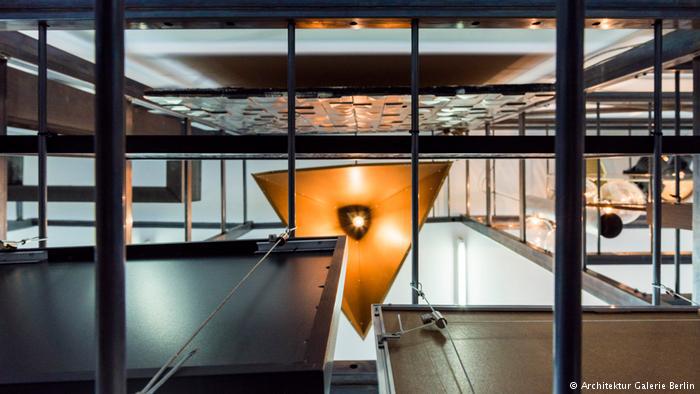 A retro touch: the new AKM will integrate into its architectural concept some of the features of its predecessor such as the lamps, tiles, or an aluminium staircase typical of the 1960s. Tabanlioglu however aims to bring the space into the 21st century 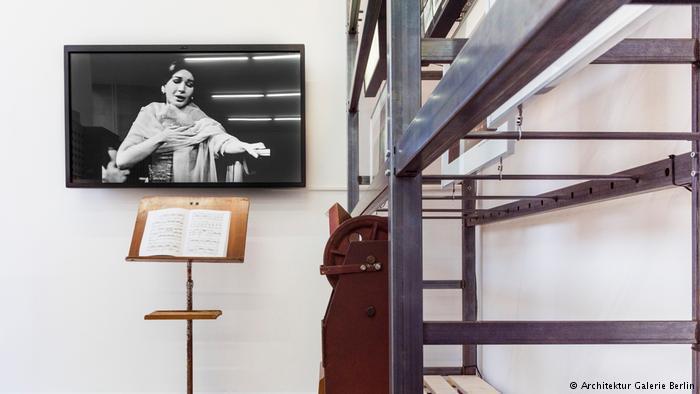 A home for the State Opera: the former AKM housed the Turkish State Opera and Ballet as well as the Istanbul State Symphony Orchestra before it closed its doors in 2008. These high art institutions will return to become the new main hosts of the venue, explained Tabanglioglu 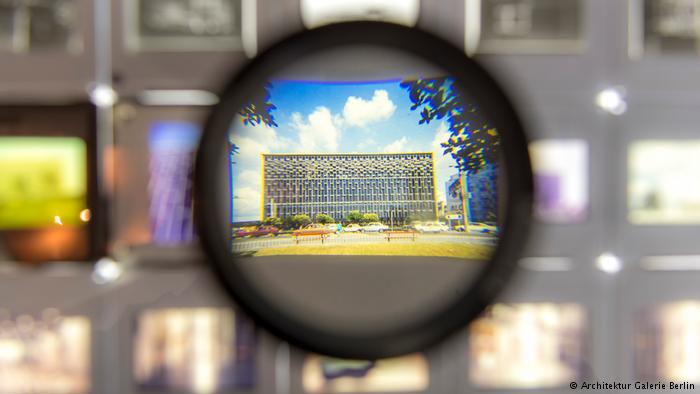 A symbol of the Republic: the aesthetically controversial AKM, often compared to a concrete block, was once one of the most modern buildings in the Turkish Republic and symbolised the country's western orientation. Citizens' initiatives and the Chamber of Architects therefore criticised its demolition. Tabanlioglu's design will allow it to be restored instead 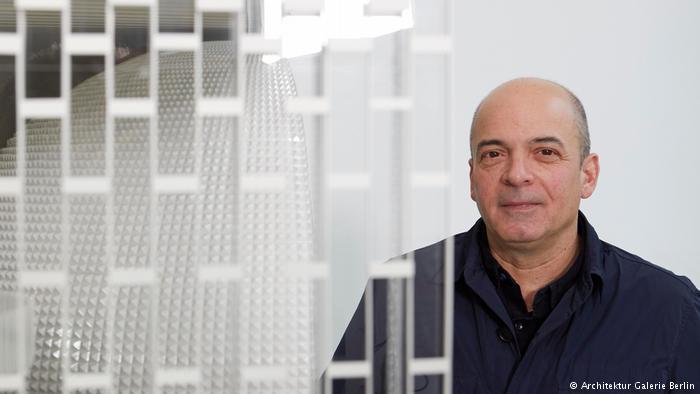 Great expectations: "It should become one of the best opera houses in the world," says Murat Tabanlioglu. His architectural signed impressive designs in the past, such as the Istanbul Museum of Modern Art and the Dakar Congress Centre

As the Turkish government continues to censor and even ban artistic institutions, some wonder what will happen to the Istanbul State Theatre, Ballet and the Symphony Orchestra, which have been without a home since 2008. Tabanlioglu is reassuring: "They will all return to become the hosts of the Cultural Centre, which is very important."

Breathing new life into the arts or merely a sterile flagship project?

The architect's firm is responsible for other landmark buildings including the Istanbul Modern Art Museum, and the Dakar Congress Centre. This project promises to be similarly ambitious. "My goal is to make the house one of the best cultural centres in the world," Tabanlioglu  explained. The Turkish capital was the 2010 European Capital of Culture, despite not having an opera house, and politicians want Istanbul's new cultural centre to help maintain the country's strong international cultural presence.

But scepticism remains about a centre that is likely to open its doors in two years – although President Erdogan is promising the first quarter of 2019. As part of Istanbul's so-called "Urban Renewal Project," many historic buildings and neighbourhoods were demolished and replaced by soulless shopping malls.

Both through its architecture and programming, the new AKM will have to prove that it is not a sterile and functionalistic flagship project, but rather a cosmopolitan cultural centre that revives its old ethos and breathes new life into the arts.

The Kurdish YPG militia did the heavy lifting in the fight against the "Islamic State", yet many foreign YPG adherents, including Germans, have come home to find themselves under ... END_OF_DOCUMENT_TOKEN_TO_BE_REPLACED

At least 150 theatre professionals were recently fired without reason in Turkey, just days before they were expecting to receive permanent contracts. Creatives accuse the ... END_OF_DOCUMENT_TOKEN_TO_BE_REPLACED

Political analyst Taqadum al-Khatib argues that Egypt can, in co-ordination with its European partners, develop a common vision to solve the complex conflict in Libya. For this to ... END_OF_DOCUMENT_TOKEN_TO_BE_REPLACED

Turkey's President Erdogan wants to create a second Bosphorus. The cost to the economy and environment would be enormous – and that's why Istanbul's mayor is attempting to stop ... END_OF_DOCUMENT_TOKEN_TO_BE_REPLACED

Libya is in turmoil and no political solution is in sight. The EU's inability to take concerted action in the country, meanwhile, is being exploited by third parties, such as ... END_OF_DOCUMENT_TOKEN_TO_BE_REPLACED
Author:
Ceyda Nurtsch
Date:
Mail:
Send via mail