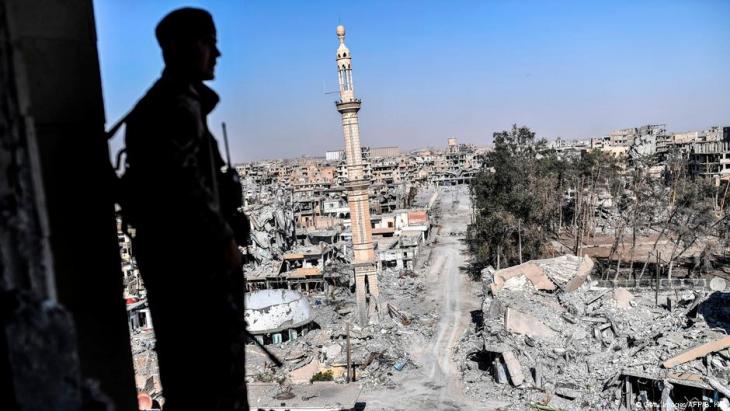 How should Germany deal with IS returnees from Syria? Can Berlin deny them the right to return? And would expatriation even be possible? By Nermin Ismail

German citizens who once joined the terrorist group "Islamic State" are currently being held in prisoner-of-war camps. Approximately 3000 former IS fighters and their families are imprisoned in Syria and Iraq; some 120 of them are German citizens.

France to bring them back

Each European state is reacting differently: the British government wants to refuse to allow an IS follower to return to Great Britain by simply withdrawing her citizenship. Denmark has ruled out a repatriation of the fighters. They are "the most dangerous people in the world", said the foreign policy spokesman for the Danish liberals.

Austria's Chancellor has expressed himself more cautiously: according to Sebastian Kurz "the protection of the Austrian population" has priority. Belgium called for a "European solution". Only France announced in January that it would take back 130 fighters with French passports. 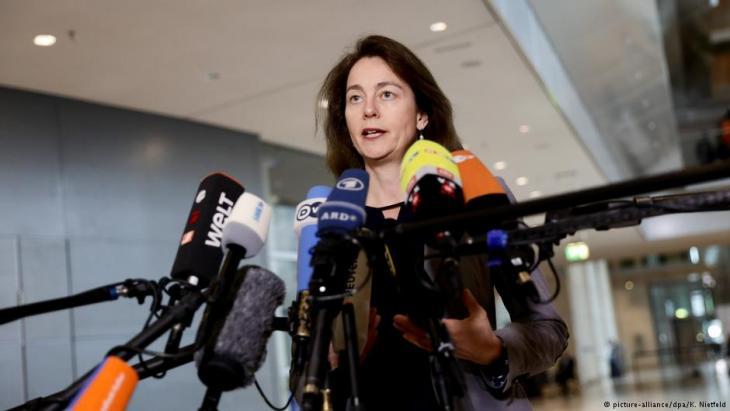 "Consistent" monitoring of IS returnees: Germany Federal Justice Minister Katarina Barley wants to prevent IS fighters from being able to move freely in Germany after their return. "Arrest warrants have already been issued for several individuals," says Barley. According to the Ministry of the Interior, some 1,050 people have left Germany for war zones in Syria and Iraq to join jihadist militias since 2013. Approximately one third of them have already returned to Germany and a further 200 people are thought to have lost their lives

How will Germany deal with this question? Does the Federal Republic have to let the Germans return home from northern Syria or can it refuse?

The current legal situation offers three options for expatriation: revocation, loss and withdrawal of citizenship. In Germany, however, Article 16 of the Basic Law prohibits the revocation of citizenship. In order to prevent political abuse, no citizen may be expatriated by revocation. This passage was also included in reaction to the mass expatriation of Jews by the National Socialists during the Third Reich.

The second option is the loss of citizenship. This happens when a person assumes a foreign nationality or voluntarily joins the armed forces of another state. However, this only applies to regular armies, not to militias of non-state actors and that includes IS.

International law expert Matthias Hartwig: "in principle, every state has an obligation to take back goods. This is recognised under international law. The German side has also demanded this from North African states such as Tunisia, Morocco and Algeria. If Germans are stuck in northern Syria, Germany must take them back"

The third case is the withdrawal of citizenship. This can occur if a person has given false information when applying for naturalisation. If this can be proven, the act of naturalisation may be rescinded.

As a rule, therefore, IS returnees cannot be expatriated. However, there is debate as to whether "a person who has remained silent about his or her proximity to radical groups during naturalisation can have his or her naturalisation revoked," says Matthias Hartwig, lawyer and lecturer at the Max Planck Institute for Foreign and Public Law.

After all, a person who pursues goals that are strongly incompatible with the German legal system would not be naturalised in the first place.

In practice, however, it is extremely difficult to prove whether a naturalised IS fighter became radicalised before or after obtaining his German passport.

"Basically, every state has a duty to take back its citizens. This is recognised under international law. The German government has also demanded this of North African states such as Tunisia, Morocco and Algeria. The Federal Republic has been at pains to point out to these countries that they are obliged to accept their citizens. If Germans are stuck in northern Syria, then Germany must take them back," Hartwig said.

According to the current legal situation, rejecting repatriation is not a realistic option. Any new legislation intended to apply to dual nationals who join terrorist groups abroad would only be applicable to future cases.

German citizens are generally registered. Proving that they are German citizens is therefore not much of a problem. "But German officials would have to travel to Syria and carry out identity checks." Should an individual be suspected of involvement in acts of war, the burden of proof lies with the German Federal Republic.

In principle, it is well nigh impossible to keep these ex-combatants out of Germany by constitutional means. Returnees holding dual nationality who are tried and sentenced in Germany could theoretically be expelled once their sentence has been served. "But a lot of time will have passed by then," points out Matthias Hartwig. "It would remain to be seen whether the state would still be interested in deporting them."

Looking outwards with the knowledge from within: a conversation with the Iraqi writer Sinan Antoon on the future of his homeland. Interview by Lena Bopp END_OF_DOCUMENT_TOKEN_TO_BE_REPLACED

Political analyst Taqadum al-Khatib argues that Egypt can, in co-ordination with its European partners, develop a common vision to solve the complex conflict in Libya. For this to ... END_OF_DOCUMENT_TOKEN_TO_BE_REPLACED

At the suggestion of his Arab students, Israeli psychologist Ofer Grosbard created the project "Quranet", which uses texts from the Koran to solve educational problems in schools ... END_OF_DOCUMENT_TOKEN_TO_BE_REPLACED

Libyans have mixed feelings about the EU. On the one hand, they admire what Europeans have achieved, but on the other, they feel let down. Moutaz and Walid Ali report from Tripoli END_OF_DOCUMENT_TOKEN_TO_BE_REPLACED

Turkey's President Erdogan wants to create a second Bosphorus. The cost to the economy and environment would be enormous – and that's why Istanbul's mayor is attempting to stop ... END_OF_DOCUMENT_TOKEN_TO_BE_REPLACED

Libya is in turmoil and no political solution is in sight. The EU's inability to take concerted action in the country, meanwhile, is being exploited by third parties, such as ... END_OF_DOCUMENT_TOKEN_TO_BE_REPLACED
Author:
Nermin Ismail
Date:
Mail:
Send via mail