Sadr's greatest strength is his popular appeal. It sets him apart from other Iraqi leaders.

His father, Grand Ayatollah Mohammed Sadiq al-Sadr, led dissent among Iraq’s oppressed Shia majority against Sunni dictator Saddam Hussein and was killed by the regime in 1999. Muqtada al-Sadr, 47, draws on his father's martyred status and his own reputation as a cleric who never fled Iraq. Other prominent figures in post-Saddam governments returned from exile in Iran and the West after the U.S.-led invasion.

In 2003, Sadr and his Mehdi Army, a thousands-strong militia formed as a volunteer force against American invaders, defied the U.S. occupation.

Baghdad's sprawling Sadr City district is a Sadrist bastion of three million people. Among them is Jaafar Mohammed, a 37-year-old fighter. He told Reuters he fought against the Americans in the early 2000s. "I sold my daughter's gold earrings so I could afford a gun." He later participated, unarmed, in protests that toppled an Iran-backed government in 2019.

In a mosque in the southern city of Basra, graduates in search of work waited in March to speak to Sadr's religious aide Aaraji. The cleric explained to Reuters that he helps graduates find jobs by talking to politicians, to people in the Sadrist Movement or even to Sadr.

Two of the graduates told Reuters they tried for years through connections with other political parties to get jobs in the energy sector. "The Sadrist Movement were the only people who helped," said 25-year-old Shihab al-Din Nouri. "I got a steady job through them three months ago working in the Basra Oil Company. I'll vote for them in the next election." 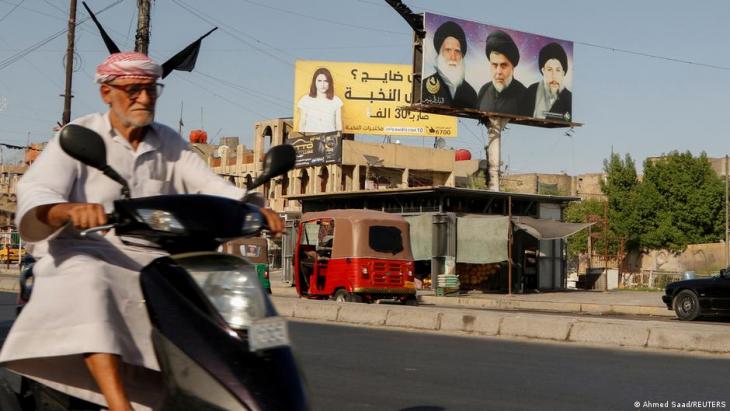 Man of the people: Muqtada al-Sadr's father, Grand Ayatollah Mohammed Sadiq al-Sadr, led dissent among Iraq’s oppressed Shia majority against Sunni dictator Saddam Hussein and was killed by the regime in 1999. Al-Sadr, 47, draws on his father's martyred status and his own reputation as a cleric who never fled Iraq. In 2003, he and the Mehdi Army, a thousands-strong militia formed as a volunteer force against American invaders, defied the U.S. occupation. Eighteen years later, Baghdad's sprawling Sadr City district is a Sadrist bastion of three million people

Starting in the mid-2000s, Sadr generally stood apart from Iraqi governments that were supported by either America or Iran.

In 2007 he pulled his Sadrist Movement out of the government over its refusal to set a timetable for a U.S. troop withdrawal. In 2008, Prime Minister Nouri al-Maliki led a crackdown on Sadr’s Mehdi Army that killed several hundred fighters. And in 2014, Sadr announced he was quitting politics. Aides say he feared his reputation would be hurt by association with a ruling class that is perceived by almost all Iraqis to be corrupt.

To be sure, the Sadrist Movement continued to hold key posts in some ministries, notably the health ministry, and it continued to field candidates in elections. But it ceased to be a major force in the government of Iraq.

Sadr's attitude began to change in the summer of 2018 at a meeting with several of his most senior political representatives at his home in Najaf, according to two senior Sadrist officials familiar with the episode. The Sadrists had just won their strongest ever election result and controlled the biggest parliamentary bloc. Sadr listened to those who wanted to take top state administrative posts. "They lobbied Sayyed Muqtada for his blessing" to install Sadrists in top jobs, said one of the officials.

Sadr gave cautious assent. "If you're able to correct the mistakes made by previous governments and save the country from chaos, then proceed," the official quoted him as saying. "If you fail it will be on your heads." Sadr declined to be interviewed for this article.

Twenty years after 9/11, the world is faced with the dual challenge of Islamophobia and anti-Westernism. Ahmet Kuru argues that Muslims in the West, well versed in both Western ... END_OF_DOCUMENT_TOKEN_TO_BE_REPLACED

Two decades after the attacks of 11 September 2001, the West faces the shattered debris of its failure – not only in Afghanistan, but also in Iraq, Syria, Libya and Yemen. What ... END_OF_DOCUMENT_TOKEN_TO_BE_REPLACED

Twenty years after 9/11, the United States is recalibrating its war policy. However, its assertions that the era of endless wars is over are a myth, writes Maha Hilal END_OF_DOCUMENT_TOKEN_TO_BE_REPLACED

The coronavirus pandemic has turned lives upside down all over the world. In the Middle Ages, however, people lived with epidemics all the time. The best and most famous ... END_OF_DOCUMENT_TOKEN_TO_BE_REPLACED

While agreeing last week to a withdrawal of US combat troops from Iraq, neither Iraqi nor US leaders can admit publicly how much they need each other. By Cathrin Schaer END_OF_DOCUMENT_TOKEN_TO_BE_REPLACED

Reading Hassan Blasim's God 99 is an immersive experience of grief and exaltation, anger and disgust, writes Marcia Lynx Qualey. We join the Iraqi narrator as he sits around in ... END_OF_DOCUMENT_TOKEN_TO_BE_REPLACED
Author:
John Davison & Ahmed Rasheed
Date:
Mail:
Send via mail

END_OF_DOCUMENT_TOKEN_TO_BE_REPLACED
Social media
and networks
Subscribe to our
newsletter