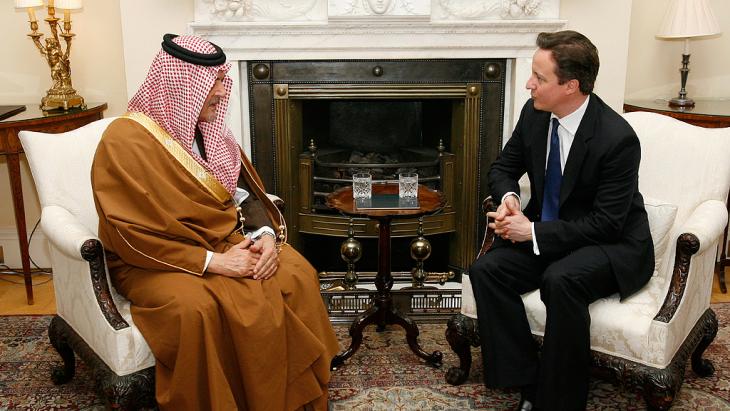 Review of the Muslim Brotherhood in the UK

Has Cameron buckled to pressure from Middle East allies?

During his announcement last week that he had ordered a review of the Muslim Brotherhood in the UK, British Prime Minister David Cameron made several references to violent extremism. Over the past two decades, Britain has introduced a whole raft of anti-terror laws that can be used in cases of violent extremism, so why is it necessary at this point in time to conduct a review into the Muslim Brotherhood? By Susannah Tarbush

Last week, British Prime Minister David Cameron announced that he had ordered a review of the Muslim Brotherhood. This review is to be led by the British ambassador to Saudi Arabia. The news has deeply divided opinion in Britain and beyond. Questions abound as to the real motivation for the review, its timing and its purpose.

Eyebrows have been raised over the appointment of the ambassador to Saudi Arabia Sir John Jenkins to lead the review. The other members of the review team are the head of the Secret Intelligence Service MI6 Sir John Sawers and National Security Adviser Sir Kim Darroch.

In the House of Lords on 8 April, former ambassador to Saudi Arabia and former head of the Diplomatic Service, Lord Wright of Richmond, asked whether Sir John Jenkins's appointment as review leader puts him in "an extremely invidious position" in that the government to which he is accredited, Saudi Arabia, "takes every step possible to discredit and destroy the Muslim Brotherhood." He added that were he still ambassador to Saudi Arabia, "I would myself find it extremely difficult if anyone were to ask me to head this review."

Lord Taylor insisted that Sir John had been appointed "because he is one of our most senior diplomats and has extensive knowledge of the Arab world" and not because he is ambassador to Saudi Arabia.

Speaking through its London press office, the Muslim Brotherhood has said that it intends to engage openly with the British government's review and will assist the inquiry "into the organisation's philosophy and values, its policies and its track record both in and out of government." However, it went on to say that "It is hard to see how Sir John Jenkins will be able to conduct an independent internal review of the Muslim Brotherhood and carry his brief as ambassador to a non-democratic regime that is openly in political opposition to the Muslim Brotherhood."

In outlining the review, Cameron told a press conference on 1 April: "We want to challenge the extremist narrative that some extreme Islamist organisations have put out." He said that it is important that the British government understands "what the Muslim Brotherhood is, what it stands for, what its beliefs are in terms of the path of extremism and violent extremism, what its connections are with other groups, what its presence is here in the UK." 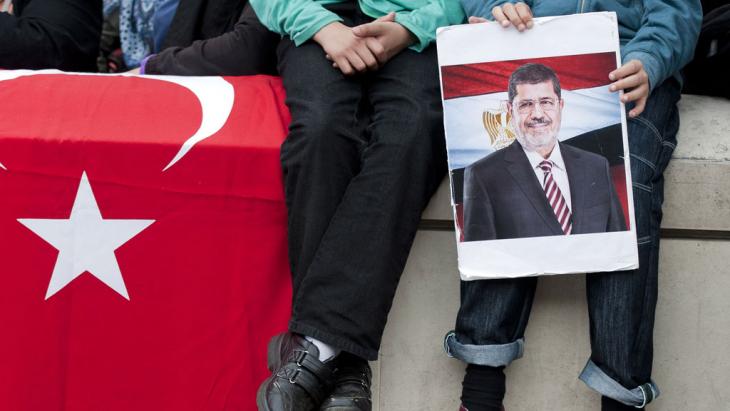 In launching the review, Cameron has been accused of kowtowing to pressure from Saudi Arabia, Egypt and the UAE, all of which have recently outlawed the Muslim Brotherhood as a terrorist organisation.

Egypt's ambassador to the UK Ashraf El-Kholy told the BBC's security correspondent Frank Gardner that Britain "has to see what is the situation of the Muslim Brotherhood in the UK, how they have been financed, how they have been communicating, if there is any kind of meeting or gathering against a third country. This is so important to us and I think the British prime minister and government don't want to find that Britain is used as a base station against another country in the region, either Egypt or someone else."

Again speaking through its London press office, the Muslim Brotherhood has said that it "will challenge, through the British Courts, any improper attempt to restrict its activity" and has engaged a top human rights lawyer as its adviser. It has also called on the British government to consider "the very many well documented and serious human rights abuses being conducted by the military regime in Egypt."

Some observers see it as significant that Cameron's announcement came after BAE, a major British company, concluded an agreement on the sale of 72 Eurofighter Typhoon jets to Saudi Arabia in February. The undisclosed value of the deal was an increase from the original £4.5 billion contract signed in 2007.

Dr Christopher Davidson, reader in Middle East Politics at the School of Government and International Affairs, Durham University, told Qantara.de that the UK government "has tied much political capital to its 'Gulf Initiative', which aims to boost trade, including weapons sales to the Gulf monarchies. Cameron seems to have buckled under pressure on this occasion and is now sending out all the wrong signals to the rest of the Arab and Muslim world."

Davidson says that the timing of Cameron's announcement of the review "strikes me as suspicious", coming in the run-up to Field Marshall Abdul Fattah al-Sisi's "likely 'election' as Egypt's president, an event closely supported and bankrolled by the governments of Saudi Arabia and the UAE. These two monarchies have invested much political capital in ensuring that the brotherhood as an organisation is destroyed, not just in Egypt, but also on the Arabian Peninsula."

Says Davidson: "Seen as a powerful alternative means of combining Islam and government, the brotherhood is essentially an existential threat to these monarchs, who portray themselves as the best, most stable and most 'western friendly' forms of government in Muslim-majority countries. The reality, of course, is very different, as these monarchs have seized hundreds of peaceful political Islamists in their own countries, while backing an Egyptian government that massacred large numbers of Muslim Brotherhood supporters last summer and has recently issued death sentences to more than 500 brotherhood supporters." 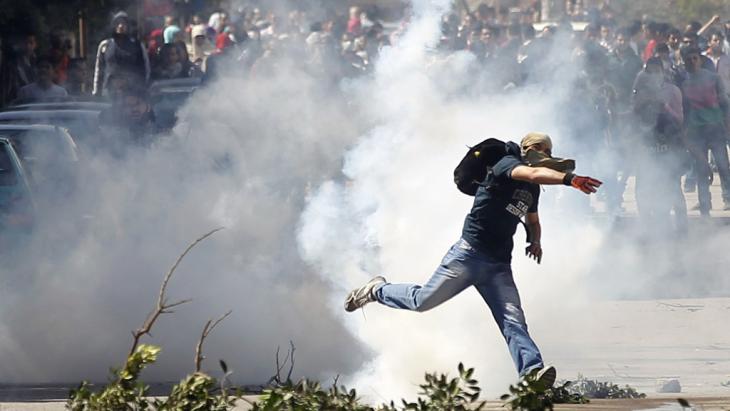 Speaking at a news conference on 1 April, David Cameron said: "As a government we are obviously opposed to violent extremism [...] we are also a government that is opposed to extremism. We want to encourage people away from a path of extremism and we want to challenge the extremist narrative that some Islamist organisations have put out." Pictured here: a supporter of the Muslim Brotherhood throws back a tear gas canister launched by riot police during clashes in Cairo in late March 2014

The BBC's Frank Gardner says the British government has been "getting a real ear-bashing for quite some time now from the UAE", which sees the Muslim Brotherhood as a "very subversive movement that is spreading its tentacles across the Middle East and which they see as an existential threat to their rule." Gardner says that the UAE has been telling Britain "if you want to carry on doing business with us, with all these lucrative contracts, then you've really got to clear these people up, you've got to sort this out. We're not going to have you providing a safe haven for our enemies."

Just a week before Cameron announced the review, a new Advisory Group on Freedom of Religion or Belief, chaired by Senior Minister of State Baroness Warsi, held its first meeting at the Foreign Office. The Advisory Group's 14 members include Professor Tariq Ramadan, whose grandfather Hassan al-Banna founded the Muslim Brotherhood in 1928. "David Cameron's religious adviser is descended from founders of the 'terrorist' Muslim Brotherhood" screamed a headline in the "Daily Mail".

Ibrahim Mounir, described as the Muslim Brotherhood's most senior leader in the UK, warned in an interview with "The Times" newspaper on 5 April that a British ban on the Muslim Brotherhood would increase the risk of terror attacks. Mounir's remarks caused an outcry, with some accusing him of threatening Britain with terrorism. However, he was simply saying what many observers see as a danger of a possible ban. For example, the previous Labour government repeatedly considered banning the Islamist organisation, Hizb ut-Tahrir. However, it abandoned this plan after being advised by police that this might encourage the group to go underground where it could become more dangerous.

It remains to be seen what the outcome of the review is and how the UK government decides to act on it.

"The people aren’t ready for democracy" has been the constitutional basis for Arab tyranny, its favourite slogan and its sacred narrative for more than a century. Yet, asks Khaled ... END_OF_DOCUMENT_TOKEN_TO_BE_REPLACED

A new global database shows a significant gap in reported COVID-related deaths, suggesting the actual worldwide death toll is short by at least 1 million. That's due in part to ... END_OF_DOCUMENT_TOKEN_TO_BE_REPLACED

Two decades after the attacks of 11 September 2001, the West faces the shattered debris of its failure – not only in Afghanistan, but also in Iraq, Syria, Libya and Yemen. What ... END_OF_DOCUMENT_TOKEN_TO_BE_REPLACED

The coronavirus pandemic has turned lives upside down all over the world. In the Middle Ages, however, people lived with epidemics all the time. The best and most famous ... END_OF_DOCUMENT_TOKEN_TO_BE_REPLACED

In Ancient Egypt, the pharaohs had "solar boats" built to take them into the afterlife. One of these boats was discovered in 1954. It has now been moved to the Grand Egyptian ... END_OF_DOCUMENT_TOKEN_TO_BE_REPLACED

Attracting little attention from the world at large, Egypt's military regime has been mercilessly going after dissidents. Now, the first executions of prominent members of the ... END_OF_DOCUMENT_TOKEN_TO_BE_REPLACED
Author:
Susannah Tarbush
Date:
Mail:
Send via mail

END_OF_DOCUMENT_TOKEN_TO_BE_REPLACED
Social media
and networks
Subscribe to our
newsletter