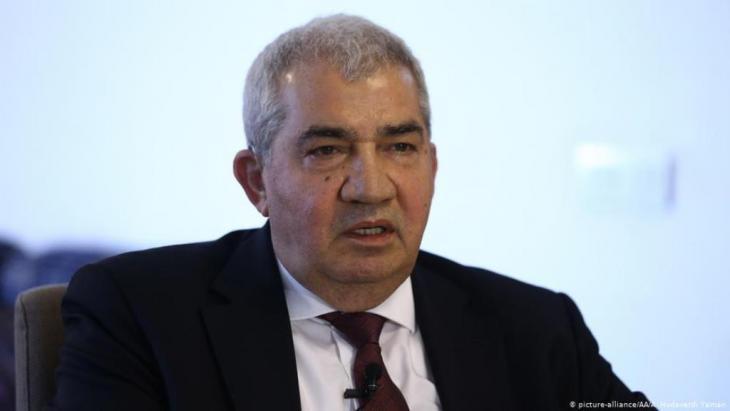 In the first case of its kind anywhere in the world, a German court is probing Syria's state torture system. Giving testimony at the trial is one of Syria's most widely respected opposition figures, Riad Seif, who helped the accused, Anwar R., get a visa for Germany. By Matthias von Hein

The austere Chamber 128 of the Higher Regional Court in Koblenz is located just a stone's throw from the idyllic promenade along the bank of the River Rhine. Since April, it has been the setting for an unprecedented trial investigating the horrors of Syria's torture chambers – and the role played by the main defendant, Anwar R., in Assad's system of oppression and persecution. The charges include crimes against humanity, 58 counts of murder, and at least 4,000 cases of torture.

The sheer scale of the trial is overwhelming. Many witnesses, survivors of torture and dehumanisation of the worst kind, have already delivered their testimony. In order to protect their identities, former members of the Syrian intelligence services have kept their faces hidden behind masks as they faced questioning on what they know about the notorious al-Khatib prison in Damascus. Investigators from Germany's Federal Criminal Police Office (BKA) and officials from the Foreign Ministry in Berlin have also faced questioning.

On day 26 of the trial earlier this week, expectations ran high as one of the figureheads of the Syrian opposition finally stepped into the witness box: Riad Seif.

From businessman to figurehead

Syrian filmmaker Feras Fayyad had travelled from Berlin to Koblenz in order to see and to hear in person what this crucial witness had to say. "After all, Riad Seif and the Syrian regime share a long history," says Fayyad. At the beginning of June, the 35-year-old had himself become one of the first victims of the abuse that took place at al-Khatib to give testimony. "What Seif can tell us is important if we are to understand the context of the conflict and the non-violent resistance," adds Fayyad.

The 73-year-old Riad Seif was once both a model businessman in Syria and, for many years, a political dissident. But there is something else that makes his biography so unusual: Riad Seif played a central role in making it possible for Anwar R., a former colonel in Syria's dissident repression machinery and ex-head of al-Khatib, to enter Germany in 2014 on a visa issued by the German embassy in Amman. 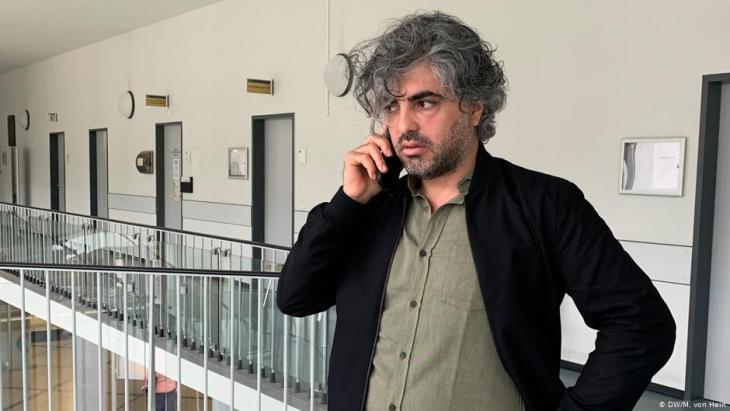 Syrian filmmaker Feras Fayyad (pictured here) travelled from Berlin to Koblenz to hear in person what Riad Seif had to say. Fayyad (35) was himself one of the first victims of the abuse at the notorious al-Khatib prison in Damascus to give testimony. "What Seif can tell us is important if we are to understand the context of the conflict and the non-violent resistance," he said

The astonishing transformation of Anwar R.

There can be no doubt that Anwar R. went through an astonishing transformation after making his way, together with his family, to Jordan in 2012. In exile, the man who is today 57, joined the opposition, establishing close contact to Ahmad al-Jarba, then President of the Syrian National Coalition. Then, in 2014, he was even part of al-Jarba's Delegation to the UN Peace Conference in Geneva.

An official from the Berlin Foreign Ministry had already confirmed this role in the opposition on day four of the trial. Speaking at the end of April, she had also testified that she had discovered from relevant files that somebody from within the ranks of the Syrian opposition had helped to secure R.'s arrival in Germany. That person was none other than Riad Seif.

Seif's interrogation took place via video link. The 73-year-old is seriously ill, making it impossible for him to travel to Koblenz. He is seen sitting in front of a camera in a Berliner District Court. Blue jacket, white shirt, short grey hair. At his side: his interpreter and his lawyer.

The presiding judge, Anne Kerber, begins by asking Riad Seif for details of his past. And he appears happy to answer, describing the modest circumstances of his childhood, which did not, however, prevent him from becoming his country's leading textiles manufacturer in the 1970s. He also talks about how, in the 1990s, he then cooperated with the German sports goods manufacturer Adidas. He also tells of how he set up a unique social partnership with his workforce, the kind of thing that had never been seen before in Syria. He goes on to describe how, until this time, he had been focused on his work and nothing else and how, despite the fact that he never even read a newspaper, he was almost accidentally voted in as a member of the Syrian parliament in 1994 and how he was involved in his first brushes with power.

Seif reports how, after the death of Syrian strongman Hafiz al-Assad in the summer of 2000, he used his office in the Syrian capital to join with others in launching what became known as the "Damascus Spring". In his house, Seif founded the "National Dialogue Forum".

Every Wednesday, hundreds of people met there to discuss political change and how to achieve it. There were lectures and discussions. Initially, after his father's death, Syria's new leader Bashar al-Assad did not repress the new mood. But then, according to Seif's interpreter: "he panicked". 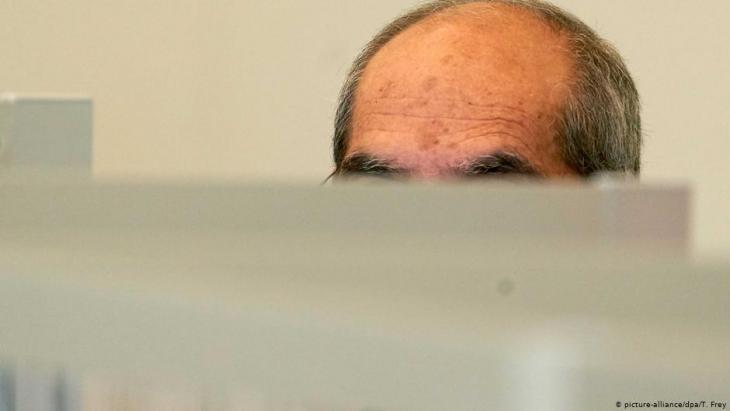 Since April, a court in Koblenz has been the scene of an unprecedented trial investigating the horrors of Syria's torture chambers – and the role played by the main defendant, Anwar R. (pictured here), in Assad's system of oppression and persecution. Anwar R., a former colonel in Syria's dissident repression machinery and ex-head of al-Khatib, came to Germany in 2014 on a visa issued by the German embassy in Amman

For his part, Seif ignored all warnings and set up a new political party. The result was not surprising: in September 2001, he was arrested. And he was still in prison in 2003 when he was awarded the Weimar Peace Prize. It was not until January 2006 that the dissident was released. His business, in the meantime, was in ruins.

But if anything, the time he spent in prison only seems to have made him more determined than ever before to challenge the regime. A dispatch from the US embassy in Damascus published by Wikileaks shows that Seif met with American diplomats just days after his release. It seems to show how Seif was again to set up a new party and outlined how the United States might support the process of political change in Syria.

Seif talks about repeated arrests and warnings against meetings with either diplomats or journalists and further arrests. From the spring of 2011, he takes part in demonstrations. He describes how he was attacked by groups of thugs. For example, in the fall of 2011: "They wanted to kill me. They beat me with iron bars."

As a result of those beatings, Seif's right hand sometimes trembles. His voice, though, is firm. It is only when he is asked about his flight from Syria, that this man, thus far so unbending, breaks into tears. The hearing is briefly interrupted.

Seif knows very well: it was on 13 June 2012 that he left his homeland. During the previous night, his house had come under gunfire. His journey initially took him to Cairo and from there on to Berlin.

In August of that year, Seif met with the then-German Foreign Minister Guido Westerwelle. "I especially respected Riad Seif's commitment and self-sacrifice in pushing for a democratic, civil and just Syria," the foreign minister said of Seif, who quickly became one of the most prominent figures in the Syrian opposition in exile.

In the same year, Seif first heard about Anwar R.. The contact between the two came via an old friend of his son from intelligence circles. He had reported hearing about how a former intelligence service colonel had ended up stranded in Jordan and fearing for his life.

Riad Seif wanted to help. He passed on to the foreign minister in Berlin all documents related to R. The understanding was that the Syrian opposition was always interested in defectors. Moreover, it was expected that R. would provide especially valuable information. But, as Riad Seif freely admits, Anwar R. never came up with the goods.

Seif has a hunch about why Anwar R. turned his back on the Assad regime: R.'s home town is Hula, the site of the first large-scale massacre in the Syrian Civil War. In May 2012, over 100 people were massacred there. Seif guesses that Anwar R.'s family could have put him under pressure to stop collaborating with the regime.

A trial that leaves nobody unmoved

The Syrians present in the Koblenz courtroom are sceptical about Anwar R.'s reinvention as an opposition supporter. In general, they point out, defectors tend to openly break with the regime – on camera. They hand in their identity cards, badges, and other insignia of their office and their power. And they clearly explain why they are turning their backs on the regime. Exiled Syrians were keen to point out that there was no such video from Anwar R.

Trial observers were clearly deeply impressed by Riad Seif's contribution as a witness. Despite his poor health, he faced up to questioning that lasting more than four hours. When it was all over, Riad Seif looked exhausted. This is a trial that leaves nobody unmoved.

Editor's note: DW follows the German press code, which stresses the importance of protecting the privacy of suspected criminals or victims and urges us to refrain from revealing full names in such cases.

Business in the Moroccan city of Tangiers is booming due to its location at the nexus of global trade routes. But many locals are failing to reap the benefits. What they crave ... END_OF_DOCUMENT_TOKEN_TO_BE_REPLACED

Morocco and the European Union are at cross purposes when it comes to the Western Sahara. And, as Germany does not support Moroccan claims to the territory, a major conflict has ... END_OF_DOCUMENT_TOKEN_TO_BE_REPLACED

Jewish voices are much more diverse than the public often sees. Jewish men and women who oppose the injustice of Israeli occupation in the West Bank deserve our respect and ... END_OF_DOCUMENT_TOKEN_TO_BE_REPLACED

They’ve already got the Louvre; they’ll soon have a Guggenheim Museum as well – and now the Emirates have added literature to their quest for cultural supremacy in the Arab world ... END_OF_DOCUMENT_TOKEN_TO_BE_REPLACED

The Germans have a fragmented perception of the conflict between Israel and the Palestinians, and their discourse is dominated by certain catchphrases. All the while, there is a ... END_OF_DOCUMENT_TOKEN_TO_BE_REPLACED

An unusual organisation brings Jews and Muslims together to fight hate and promote dialogue. In the small central German city of Marburg they have been jointly calling for an end ... END_OF_DOCUMENT_TOKEN_TO_BE_REPLACED
Author:
Matthias von Hein
Date:
Mail:
Send via mail

END_OF_DOCUMENT_TOKEN_TO_BE_REPLACED
Social media
and networks
Subscribe to our
newsletter