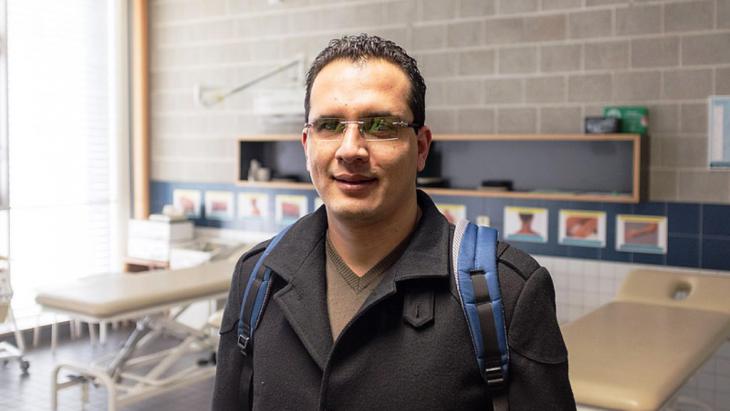 Rights for the disabled in Tunisia

Intuition plays an important role in the life of Yassine Rihani. The 34-year-old Tunisian lost his eyesight in 2006 and has been working as a physiotherapist ever since. As a human rights activist, he also has a feel for the pressure points in society and works to promote the rights of people with disabilities. By Wolfgang Kuhnle

In his work at the Charles-Nicolle University Hospital in Tunis, Yassine is concerned with more than just the health and well-being of his patients. In his spare time he is also actively involved in promoting the rights of people with disabilities. As former president of the Regional Blind Union in Tunis he was an important voice in the struggle for recognition and equal rights for blind and visually impaired people. After many years as president of the association, Yassine now devotes his attention to the inclusion of visually impaired people in the country's National Library.

At the end of 2016, Yassine applied for a place on Germanyʹs Institute for Foreign Cultural Relations (ifa) CrossCulture Programme in order to find out more about new physiotherapy methods and techniques, as well as to learn more about dealing with people with disabilities. He hoped that this would also provide fresh impetus for his work as a human rights activist.

Yassine spent his time in Germany at a physiotherapy training college in Nuremberg. It forms part of the city’s Education Centre for the Blind and Visually Impaired and enables young people to complete a three-year vocational training course that allows them to work in practices, clinics or as independent physiotherapists.

"Many blind people have a very strong sense of touch," explains Gertraud Luce-Wunderle, doctor and teacher at the college. This is why it is often a good idea for them to train to be physiotherapists. "Yassine was no exception. I was very impressed by the way he applied his hands to the patients' bodies."

It’s normal to be different

"Inclusion is not a one-way street," explains Karin Gatschenberger-Bahler while crossing the campus at the Education Centre. This concept has particular resonance for the deputy head, as the principle of inclusion has now become an important aspect of all educational institutions. The physiotherapy training centre not only welcomes visually impaired and blind people, but also sighted students looking to embark on a training course. 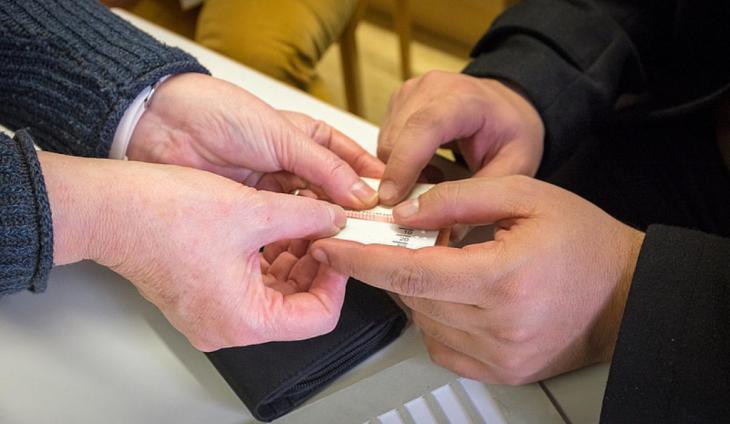 In the rehabilitation area of the Education Centre for the Blind and Visually Impaired, blind and highly visually impaired students are given individual support. For example, they learn to determine the value of banknotes using simple tools (photo). Simple yet precise: different-sized banknotes are folded and inserted into a gauge and information about their value is transmitted by Braille

According to Gatschenberger-Bahler, this creates a learning atmosphere in which equality and respect are not just empty phrases, but an integral part of day-to-day work. "We are proud of the fact that we are able to integrate all our vocational students into the labour market," says the deputy head, because a permanent job is vital for active participation in society.

In Nuremberg, Yassine picked up lots of new ideas and gained a renewed sense of optimism for his voluntary work in Tunisia. Fortunately he can now put this enthusiasm to good use, as the situation in his home country is currently much more positive. In today’s post-revolutionary Tunisia it is possible to do things that were unthinkable seven years ago. "The old regime wasn’t particularly interested in discussing the rights of people with disabilities. Human rights were generally not much of priority, no matter who you were", recalls Yassine, with reference to the autocratically governed Tunisia under the rule of Ben Ali.

A revolutionary milestone: Article 48 of the constitution

Seven years after the regime’s overthrow in 2010/2011, many observers see Tunisia as a beacon of the "Arab spring" in the Middle East and North Africa. In other countries, the desire for change, human rights and co-determination has often resulted in bitter disappointment, but Tunisia has had a new constitution – considered to be one of the most progressive in the Arab world – since 27 January 2014.

Yassine is particularly pleased about Article 48 of the new constitution, as he fought for it for many years in his capacity as a human rights activist. For the first time in Tunisia's history, it now says: "The state protects people with disabilities from all forms of discrimination. Every disabled citizen is entitled to services that ensure his or her full integration into society. The state shall take all necessary measures to achieve this". A milestone, as Yassine calls it, which was only made possible by the constant pressure put on parliament by activists. 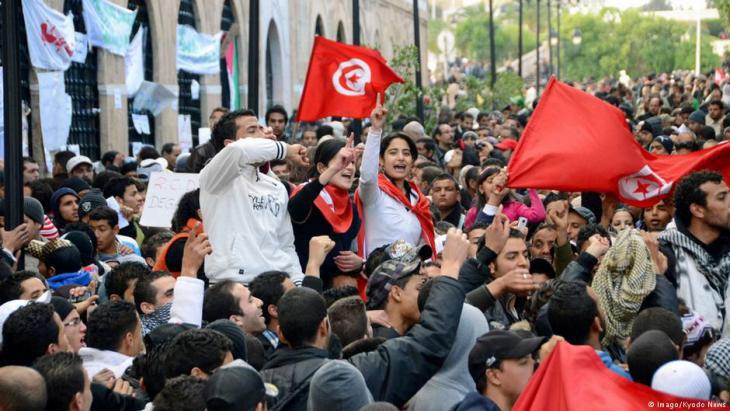 Birthplace of the Arab Spring and a model of democratic transition: the people of Tunisia threw off the yoke of dictatorship all on their own, which automatically cast the country in something of a pioneering role. This image was reinforced on 10 February 2014, when Tunisia adopted a new progressive constitution

This persistence has certainly paid off. The visibility of various collectively organised initiatives aimed at promoting an active implementation of Article 48 is gradually starting to change society’s perceptions. This is particularly evident in the right to freedom of assembly, which is increasingly being taken up by people with disabilities.

In October 2017, dozens of deaf and mute people demonstrated in Tunis to remind the government of its commitment to the right to work and education. At the same time, Yassine wants to stress the importance of the politically independent work of civil society actors in the country. The mistrust of state intervention since the overthrow of 2011 appears too deeply rooted.

Looking to the future

Yassine knows exactly what still needs to be done once his visit to Nuremberg has been completed: "We have a lot of plans for Tunisia. There is still a long way to go before we can talk of real inclusion. We must continue it with great courage and perseverance." For example, there is still a great deal to do with regard to local transport and schools in order to enable or simplify access for people with disabilities. Albert Einstein's words give him strength: "Life is like riding a bicycle. To keep your balance, you must keep moving."

Gatschenberger-Bahler and Luce-Wunderle from the physiotherapy training centre in Nuremberg took a very positive view of the three months that Yassine spent with them: "He was a real asset to the college. Of course there were language barriers, but we were still able to learn a great deal from each other. Yassineʹs particular approach to pain therapy, the ʹpainkillerʹ method, was new to us," says Luce-Wunderle.

They are both very focussed on the future, stressing that the road to inclusion is never-ending. But the main thing is that the road is being trodden – in both Germany and Tunisia.

Germany’s electorate includes some 7.4 million citizens with international roots, while many more millions of residents from abroad aren’t allowed to vote. Both groups are often ... END_OF_DOCUMENT_TOKEN_TO_BE_REPLACED

No other Western poet was arguably so well-versed in the Koran or so fascinated by Islam as Germany's national hero, Goethe. In a new publication that examines all Goethe's ... END_OF_DOCUMENT_TOKEN_TO_BE_REPLACED

Migrants are often maligned as being responsible for Europe's problems. Yet their integration is in Europe's interest. Michael Thaidigsmann believes that a long-term vision is ... END_OF_DOCUMENT_TOKEN_TO_BE_REPLACED

How could the Afghan government and its institutions collapse so quickly? That things were going wrong in Afghanistan had been obvious for a long time, yet the West preferred to ... END_OF_DOCUMENT_TOKEN_TO_BE_REPLACED

Shida Bazyar's new novel is the literary surprise of the year. It tackles the pressing issues of our time, and yet it is timeless. This is a story of friendship, marginalisation ... END_OF_DOCUMENT_TOKEN_TO_BE_REPLACED

The swift fall of Kabul recalls the ignominious fall of Saigon in 1975. Beyond the local consequences – widespread reprisals, harsh repression of women and girls, and massive ... END_OF_DOCUMENT_TOKEN_TO_BE_REPLACED

Comments for this article: Inching towards inclusion

I am tunisian, and sincerely, i know of no better friend to Tunisia than the german Government and the German people.
Sincere thank you to the people of Germany, we will make a better and safer world for all.

END_OF_DOCUMENT_TOKEN_TO_BE_REPLACED
Social media
and networks
Subscribe to our
newsletter