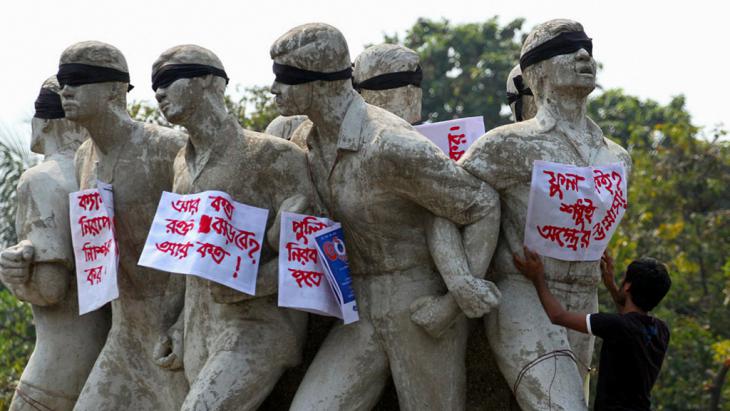 The recent murder of prominent Bangladeshi-born blogger Avijit Roy has once again shone a spotlight on the state of freedom of speech in the country. Experts believe that fundamentalists are gaining ground as the country spirals deeper into a political crisis. By Roma Rajpal Weiß

The vicious murder of Avijit Roy, a US blogger of Bangladeshi origin, by unknown assailants in the country's capital, Dhaka, on 26 February 2015 was a huge shock for secularists and a severe blow to their battle for freedom of speech in this South Asian country. The slain author invited the wrath of religious fundamentalists, who accused him of insulting Islam. An atheist, Roy was the founder of the blog Mukto-Mona (Free Thinkers), which advocated free speech and was critical of religious dogmatism.

Tension between Islamist groups and bloggers peaked in February 2013 during the Shahbag movement, when bloggers and activists organised protests demanding capital punishment for those accused of committing war crimes during Bangladesh's war of Independence from Pakistan in 1971. It led to counter-protests by Jamaat-e-Islami, the country's largest Islamist party, also known for being pro-Pakistan and opposed to the foundation of a secular Bangladesh.

Jamaat-e-Islami had gathered hundreds of thousands of supporters to demand a blasphemy law, similar to the one in Pakistan, which was rejected by the government on the grounds that existing laws sufficed to punish anyone who attempted to insult religion. 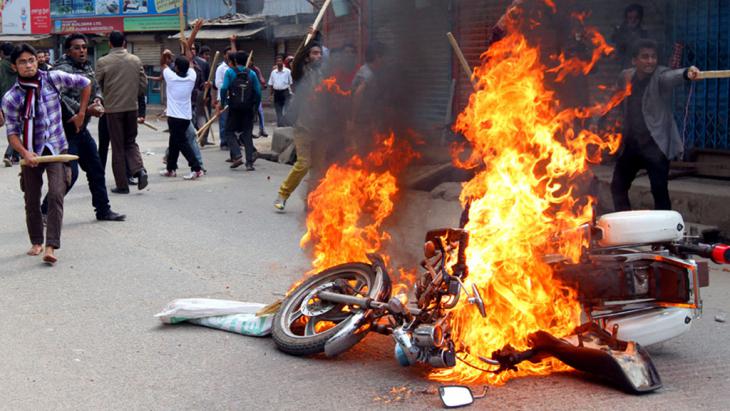 Ongoing violence: opposition activists torch vehicles during protests in Dhaka on 5 January 2015 as violence broke out across Bangladesh and two opposition activists were shot dead in clashes between supporters of the government and the opposition on the first anniversary of controversial elections

In the wake of the 2013 protests, bloggers and intellectuals in favour of the capital punishment for those accused of war crimes came under scrutiny and some, like the outspoken blogger Ahmed Rajib Haider, became victims of targeted attacks by Islamist groups. Haider was hacked to death on 15 February 2013 in an attack similar to the one that took the life of blogger Avijit Roy two years later.

Haider's death sparked an international outcry, and bloggers demanded the separation of state and religion and the banning of Islamic political parties like Jamaat-e-Islami. In an effort to appease the country's Muslim majority and to quell the unrest in the country, the ruling Awami League (AL) party clamped down on "atheist" bloggers supporting the ban on Jamaat. Over a dozen websites and blogs were blocked, and many bloggers were detained.

Blogger Asif Mohiuddin was lucky to survive a brutal attack by Islamists, but was arrested for "blasphemous" posts. He was released after three months but still faces charges and continues to receive death threats from radicals. He told Qantara.de that Roy's killing is another attack that reflects the poor state of freedom of speech in the country. "It is very difficult to voice one's critical opinion or views in Bangladesh because the fundamentalists have a lot of support in the country." 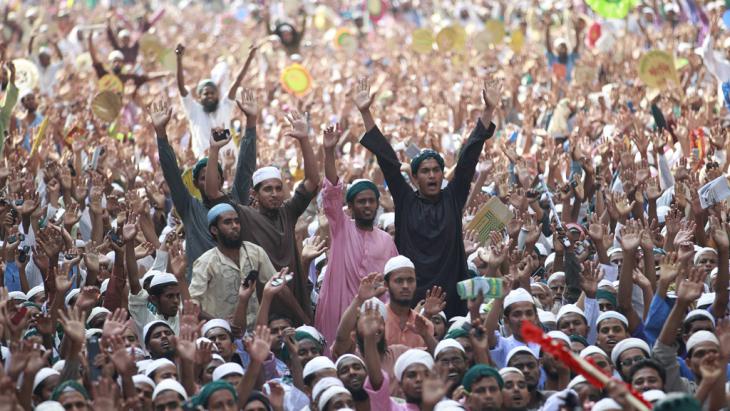 Activists of the political organisation Islami Andolan Bangladesh take part in a grand rally in Dhaka on 29 March 2013 to demand, among other things, the introduction of a blasphemy law

Mohiuddin is critical of the government and believes that it has been turning a blind eye to the growing arc of religious radicalism in the country. "Fundamentalists manage to gather a lot of support from madrassas where young people who do not have access to good education are easily brainwashed and instigated to commit violence."

Mohiuddin says that each time the country goes through a political crisis, the Islamists try to move centre stage. "The Islamists once again want to exploit the crisis to push themselves into the limelight so they can have a space in the political arena."

Imtiaz Ahmed, professor of International Relations at the Dhaka University, believes that the on-going political crisis is another reason why the fundamentalists are gaining ground in the country. "The current political crisis and violence has somehow contributed to Roy's murder. The country's two main political parties are at loggerheads and while they are busy blaming each other, the hardliners didn't come under scrutiny."

He adds, "It was quite a shock that Avijit got killed, but what was even more shocking was that he was attacked in a public place where there were a lot of security officials, and despite that, the attackers could flee." 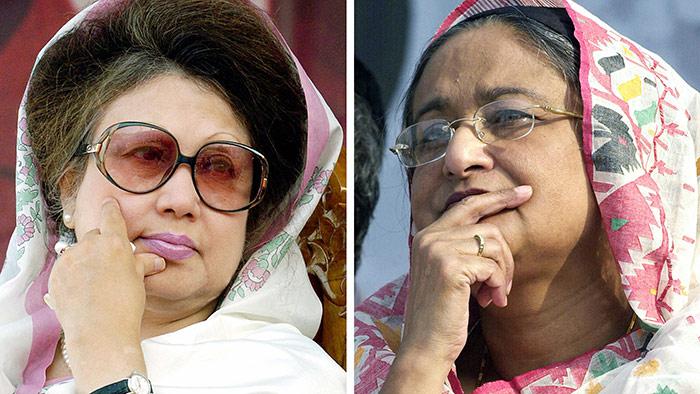 Khaleda Zia (left) is head of the opposition in Bangladesh; her rival, Sheikh Hasina (right), is the country's prime minister. Their respective parties and supporters have been at loggerheads since controversial elections in January 2014 were boycotted by the opposition. According to Roma Rajpal Weiss, "experts believe that the bitter political rivalry between the two women is the main reason why Bangladesh is a hyperpolarised society"

Bangladesh has been plagued by violence since the controversial 2014 general elections, when the country's largest opposition party, the Bangladesh Nationalist Party (BNP) under its leader Khaleda Zia, boycotted the elections.

The violence took a turn for worse earlier this year when Zia was confined to her office by Prime Minister Sheikh Hasina. Zia had called for a nationwide protest on 5 January to mark Hasina's first anniversary in office. Hundreds have been injured and at least 80 have been killed in the clashes between the rival parties' supporters. Experts believe that the bitter political rivalry between the two women is the main reason why Bangladesh is a hyperpolarised society.

Ahmed told Qantara.de that the worsening crisis has reached a point of no return. "Polarisation has been there for quite some time, but this time, it has hardened to an extent that it is hindering the daily life of general masses, and the state of affairs is very depressing."

He insists that there is an urgent need to resolve the political deadlock because it has left open a wide space that could be filled by fundamentalism. "Both parties have to work together to create a much bigger democratic space, and we need to invest in an intellectual discourse on tolerant Islam through investment in institutions and Islamic scholarship. Only if these measures are taken up collectively and simultaneously do we have a chance of resolving the crisis."

Home
Print
Newsletter
More on this topic
On Raif Badawi, Charlie Hebdo and non-violent Islamism: "We are all in this together, like it or not"Taliban attacks on schools in Pakistan: "We will never forget what happened"Rohingya Muslims in Myanmar: The spectre of ethnic violence reappearsThe Muslim Rohingya in Myanmar: In the shadow of an icon
Related Topics
Democracy and civil society, Freedom of the press, Human rights, Islam in Southeast Asia, Islamism | Political Islam
All Topics

Many marriages to British Asian men are accompanied by false promises of improved finances. Later when the men abandon their wives to return to the UK, some brides' families find ... END_OF_DOCUMENT_TOKEN_TO_BE_REPLACED

Global heating is driving domestic migration in Bangladesh, which sits just above sea level. With a population of 160 million, it is the most densely populated nation in the world ... END_OF_DOCUMENT_TOKEN_TO_BE_REPLACED

As Qatar prepares to host the 2022 FIFA World Cup, the country has come under fire for its treatment of migrant workers, with some nations calling for a boycott of the contest. ... END_OF_DOCUMENT_TOKEN_TO_BE_REPLACED

Urban transport concepts in the global South, often promoted by organisations such as the World Bank, aim to encourage motorised private transport – at the expense of non- ... END_OF_DOCUMENT_TOKEN_TO_BE_REPLACED

Tents, mud and cold: refugees contend with miserable conditions in Bosnia & Herzegovina. With the European Union demanding that Bosnia accommodate the asylum-seekers, its ... END_OF_DOCUMENT_TOKEN_TO_BE_REPLACED

Authorities in Bangladesh started sending a first group of more than 1,500 Rohingya refugees to the isolated island of Bhasan Char, despite calls by human rights groups for a halt ... END_OF_DOCUMENT_TOKEN_TO_BE_REPLACED
Author:
Roma Rajpal Weiß
Date:
Mail:
Send via mail

END_OF_DOCUMENT_TOKEN_TO_BE_REPLACED
Social media
and networks
Subscribe to our
newsletter