"The Halal Trend Is Unstoppable"

The ritual slaughter of animals for religious reasons is basically permitted in Germany, although management of the practice is complicated and controversial. But the enormous potential of and demand for 'halal' foodstuffs here in Germany is leading to an increase in production. Daniela Schröder has researched the issue 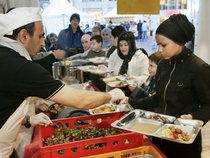 Industry watchers say that no other food market segment is growing as fast as halal; so now German businesses are gradually realizing that there is money to be made in this segment

​​Gehlenberg is a sleepy village in the south of Oldenburg-Land in the state of Schleswig-Holstein. It has just over 1,600 residents, there's a community center, church and war memorial, the local pub is called "Paraplü", the restaurant "Hüttenbernd". There are several crucifixes along the roadsides and a tiny chapel, the region is staunchly Catholic. But for three days a week in a factory hall on the outskirts of the village, it's the Prophet Mohammed who lays down the rules.

This is where the family business Meemken produces a wide variety of sausages according to Islamic specifications. The company delivers almost 100 tons of Koran-approved salami, sausage and boloney every week to grocery stores in Germany and abroad.

The appeal of a new market

For years now, international food giants such as Nestlé or Unilever have had a range of halal products on the market. "Halal" in Arabic and "helal" in Turkish means "that which is permitted" or "that which is allowed". The term is applied to the Muslim way of life as a whole, a lifestyle in which the correct diet plays a major role.

Now German businesses are also gradually realizing that there is good money to be made from the religiously informed buying habits of Muslims. And in economically uncertain times like these, the idea of tapping into a new market is an appealing one. 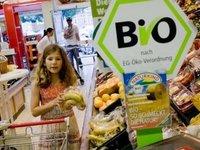 Advertising halal products in Germany is still taboo for many German companies: retailers worry that non-Muslim customers will be scared off by shelves stocked with halal goods

​​This new market in Germany is much larger than previously thought. According to a recent study, between 3.8 and 4.3 million Muslims live in the Federal Republic. And because they have on average more children, Muslim consumers are seen as one of the most interesting markets with great future potential. The World Halal Forum in Malaysia says that already, 'halal food' represents some 17 percent of the global food market.

Industry watchers say the potential is a long way off being exhausted, and that no other food market segment is growing as fast as halal. They say that in 2004, global revenue from halal products totaled 587 billion US dollars, and that in 2010, this figure will have risen to 641 billion dollars. The experts predict a turnover in the coming year of 67 billion dollars for Europe's halal market.

Countries with larger Muslim populations have already made provisions for their particular consumer requirements. In France, supermarkets run by the Casino chain offer meat and sausage products manufactured according to halal standards, in England such products are available at Tesco and Sainsbury's. French delis stock halal goose liver pate, the British drugstore chain Boots sells halal baby food and encouraged by the success of its halal fast food in London, McDonalds plans to serve halal chicken in other locations in Europe in the near future. 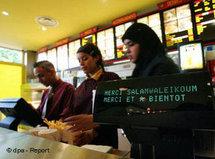 ​​In German supermarkets however, the range of halal products on offer is meager. Many traders are especially reluctant to stock products that have been made from animals slaughtered according to halal methods, due to fears that animal rights activists will make trouble.

In January 2002, Germany's constitutional court struck down the country's former ban on ritual slaughter, after this ban was appealed by a Turkish butcher. It ruled that Muslim butchers were allowed to slaughter livestock with a cut to the throat and without anesthesia, if their faith demanded it.

Most Muslims regard an anesthetized animal as already dead, meaning to eat it would contravene the Koran's ban on carrion. In a bid to side-step the problem, many German halal producers buy their meat abroad.

What is 'halal' in contemporary Europe?

The subject of ritual slaughter is even controversial within Islamic circles. "You have to appreciate in what era the Prophet's rules were written, and you can't just blindly follow traditional standards," says Yusuf Çalkara from the European Halal Certification Institute in Hamburg. Other certifying bodies are more categorical in their assessment.

In Germany, many traders are reluctant to stock products that have been made from animals slaughtered according to halal methods, due to fears that animal rights activists will make trouble

​​"Industrially manufactured meat is never halal," says Mahmoud Tatari of Halal Control in Rüsselsheim. According to Islamic standards, he says, animals must not suffer any stress or agony, and mass production cannot meet these requirements.

The various certification authorities also have differing views on the requirement that the name of Allah should be called out by the butcher as each animal is being slaughtered. Some are happy if that call is emitted by a tape recording, although the play button must be pressed by a Muslim. Until now, Germany's devout Muslims have been unable to agree on a uniform halal standard, due to these differing interpretations of the Koranic rules.

Because Germany's Muslims are affiliated to a range of different organizations, there is no overall monitoring entity carrying out a general certification procedure. The number of halal certifiers controlling raw materials, production, standards of hygiene and suppliers is also large and unstructured.

Sausage manufacturer Meemken has just passed its halal audit with flying colors. The company's 60 halal products already account for half of its entire output. Up to now, the business has been supplying retailers in other European countries, but now its order books also include German branches of the supermarket discounter Netto. The trigger for this was when Turkish wholesalers approached the Gehlenberg concern with a request for halal goods.

For freedom of religion: in January 2002, Germany's constitutional court struck down the country's former ban on ritual slaughter

​​The machines are still painstakingly cleaned to remove any traces of pork on halal production days. The production processes will be separated when the company installs new machinery, something it plans to do soon. "We are definitely going to expand this area of our business," says managing director Rolf Meemken. "We are seeing disproportionately strong growth in the halal sector."

Poultry concern Wiesenhof has had its products certified as halal for years now. But it's up to the wholesalers and supermarkets themselves whether or not to label the goods as halal.

"German companies are too cautious," says Levent Akgül of ethic marketing agency Akkar Media in Hanover. "They are not familiar with the other culture, and cannot assess the risks involved." According to Akgül, German retailers worry that non-Muslim customers will be scared off by shelves stocked with halal goods. This is why advertising halal products in Germany is still taboo for many German companies, he says.

But that looks set to change. "The halal trend is unstoppable," says Peter Groethues, head of the food industry sector at Cologne's trade exhibition company, due to host more than 800 halal food producers at the ANUGA trade show later in October. Most of the exhibitors are foreign companies that have been exporting to Germany for years. 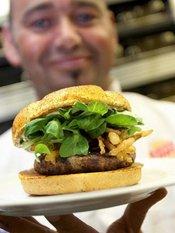 ​​The products they sell are still mostly restricted to Muslim corner shops across Germany. But the Federal Association of German Food Retailers says "halal is set to become an increasingly significant pillar of business." This is no surprise when you learn that the annual purchasing power of Germany's Turkish community is an estimated 25 billion euros. There is good money to be made here, with Nestlé's halal products already generating greater revenue than its organic lines.

After all, this is about more than just meat and sausage. Halal is a term that can be applied to all foodstuffs, from cheese without animal enzymes to cookies, condiments and coffee, as long as manufacturers clean their machines with alcohol-free detergents. Haribo recently introduced a sweet made with beef instead of pork gelatin, and these days you can also find apple juice that has not been filtered with pork gelatin.

"But the halal market is far from saturated," says Derya Altay from the German Federation of Turkish Wholesalers and Retailers. "Where German consumers can choose from a large variety of products, the Muslim consumer has just two or three."

For industry as a whole, thinking outside of the box could well pay off. Cosmetics made without animal ingredients and animal testing are just as important to Muslims as fashion, hotels and financial products that adhere to the teachings of the Koran. Public health is also still an undiscovered market.

Mahmoud Tatari has just certified the first two hospitals in Germany. As well as halal food, they offer patients treatment by doctors and nurses of the relevant sex and a chauffeur service to the nearest mosque.

The halal market is huge, and the boom it is currently experiencing is not just a global economic trend. The growing significance of Muslim consumers also represents a shift in self-perception. Adherence to Islam is about more than religion and politics, a Muslim lifestyle is also about making consumer choices.

"Muslims would rather spend their money on halal products than attaining political goals," says Zahed Amanullah, European head of the consumer portal zabihah.com. In other words: Islamic identity can also be defined via the shopping cart.

Islamic Dietary Laws in Practice
Halal for All
It's not easy to eat a purely halal diet. Muslim consumers in Germany have to be well informed and sometimes accept compromises. There are now halal seals of approval and a telephone hotline to help them. But it is still almost impossible to avoid traces of pork in food products. By Ute Hempelmann

Beurger King Muslim
In Clichy-sous-Bois it's "Bacon Halal" instead of "Le Big Mac"
Parisian Muslims can now enjoy halal meals in an atmosphere that mimics US fast-food joints after BKM, or Beurger King Muslim, opened its doors. Gertrud Sterzl reports

Alcohol Consumption in Islamic Countries
The Devil's Brew in Great Demand
Alcohol and Islam are generally considered to be mutually exclusive, but people do drink in the Muslim world. Alfred Hackensberger says that, even though most Muslims consider alcohol to be something negative, there's another tradition dating from a more tolerant period

END_OF_DOCUMENT_TOKEN_TO_BE_REPLACED
Social media
and networks
Subscribe to our
newsletter