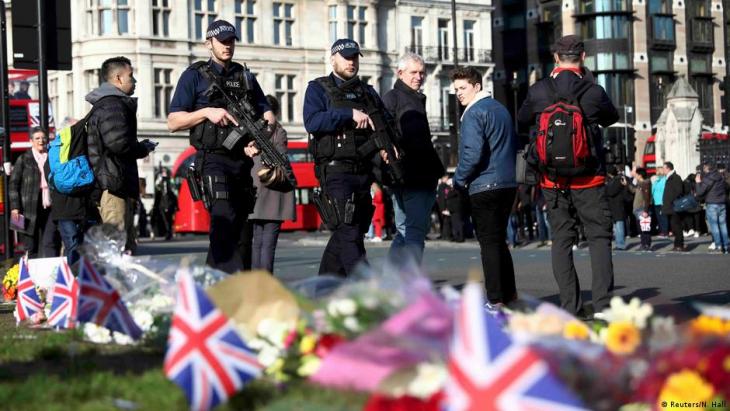 "The Suspect" by criminology lecturer Rizwaan Sabir is the harrowing account of the author's own experiences at the hands of the UK's counterintelligence agencies. At the same time, the book is a carefully researched analysis of how the Muslim community was targeted by those supposedly working to protect society. Richard Marcus read the book

Rizwaan Sabir was working on his PhD when he came to the attention of the security services in 2007. He had downloaded an essay entitled The Al Qaeda Training Manual to use as background material for his studies on political extremism. Though the title may sound suspicious, Sabir had downloaded it from the public website of the US State Department and it was also freely available through his university's library system.

Naturally, all the security services saw was that someone with a Muslim surname had downloaded a publication featuring the words "Al Qaeda". Worse still, the person in question had even shared the file with someone else with a Muslim-sounding surname. Sabir had in fact sent the material in question, as well as other source data, to his academic advisor.

Rather than engaging in any basic research into the material and its availability, the police, Special Branch and everyone else, simply rounded up Sabir and his mentor. Even when they did investigate the material in question, they asked someone who was more likely to give them the answers they wanted: that the document could be of no use to Sabir in his studies. 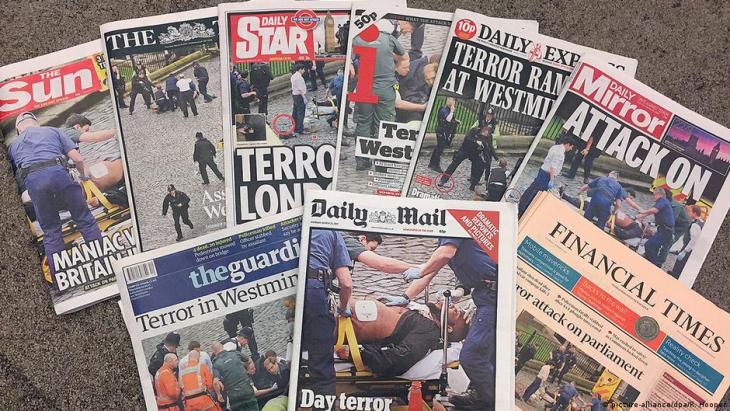 On 22 March 2017, Khalid Masood, a 52-year-old Briton drove a car into pedestrians on the pavement in Westminster, injuring four of them fatally. He then crashed the car and fatally stabbed an unarmed police officer (pictured here: images of the aftermath of the Westminster attack on the front pages of a selection of British newspapers). In the wake of this attack and the London bombings of 7 July 2005, Britain was shocked that the majority of the perpetrators had been "home-grown terrorists". As a result, British counterterrorism services and policing focused increasingly on the Muslim community

Even following Sabir's exoneration and having been compensated financially by the police for wrongful arrest and imprisonment, he remained on security service watch lists. He was continually being pulled over in airports, at UK customs checks and while driving. A couple of years of this treatment understandably took a severe mental and psychological toll.

Years after the incident took place and long after the regular harassment had stopped, the symptoms of his mental illness would reappear. He suffered PTSD (post-traumatic stress disorder) to such an extent that even preparing to teach one of his classes on counterterrorism was enough to trigger feelings of paranoia.

While it might sound a little far-fetched to think that someone attending your lecture may be taking notes for the security services, it is important to realise to what degree the Muslim community in the UK, and other countries, have been put under surveillance. In something they call "preventative measures", the security services enlist the aid of everyone from social workers to teachers to inform them of anyone who has the potential to become a terrorist. 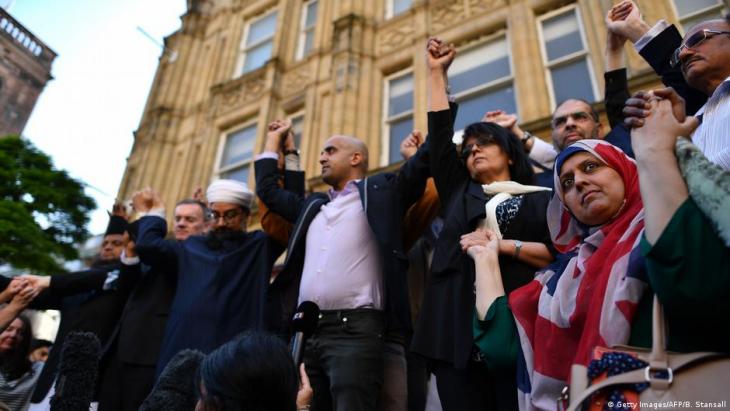 People attend a multi-faith vigil outside the Town Hall in Albert Square, Manchester, after the terrorist attack on the Manchester Arena on 22 May 2017. A little over six months earlier, the US-based NGO Open Society Justice Initiative published a report that concluded that the UK's main counter-radicalisation programme, Prevent, was "badly flawed, potentially counterproductive and risks trampling on the basic rights of young Muslims"

The philosophies behind the approach

If your teacher or counsellor, or anybody for that matter, thinks something you are reading or the people you are seeing might lead you down the path to becoming a terrorist, that information will be passed along to the relevant authorities, who will then place you under observation – and if you're really unlucky, you might even by picked up and questioned.

While the first part of the book details Sabir's treatment at the hands of the security services, he also spends a great deal of time breaking down the system and the philosophies behind their approach to the Muslim community in the wake of 9/11. He shows how the British services used a mixture of colonial tactics for dealing with "native" populations who wouldn't kowtow to the Empire, as well as out and out racial profiling.

He also details some of the more draconian laws put in place. Section 7 of the Terror Act allows the Security Services – and this includes everyone from airport security to MI5 – to stop and question you about who and what you are. Failure to comply under Section 7 can result in being arrested for obstructing an investigation into terrorism.

Standing up to the system 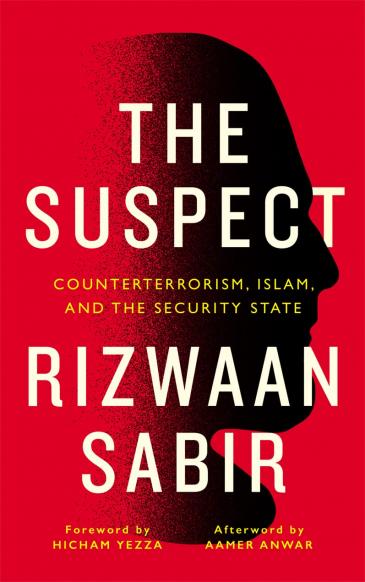 According to Richard Marcus, Rizwaan Sabir's "The Suspect" "is a heart-wrenching and eye-opening examination of the overreach continually practiced by security services around the world. It is a must-read for anyone who cares about civil liberties"

If you were Muslim, it seems, you were guilty until proven innocent. If you were dark-skinned with a supposedly Muslim sounding name, you'd better be able to account for your movements and reading habits for the last ten years. For a system supposedly designed to prevent terror attacks, it actually seems to have been designed to cement the atmosphere of hate that fosters the radicalisation of people.

However, Sabir also suggests a way people can stand up to the system. When compliance is obligatory – see Section 7 – you can still make it clear that you don't consent to the process. It's a subtle difference, but by complying with interrogations without giving your consent helps to show you've been coerced into answering questions. This takes the moral high ground away from the security forces – refuting the notion they're doing this for "the good of the state" and are a benign presence.

We've heard about some of the incidences of Muslim people being picked up and arrested without any evidence until they are finally released. However, no book has managed to capture the experience quite like The Suspect. Sabir's bravery in recounting the mental anguish his treatment at the hands of the UK's security services caused, and is still causing him today, is astounding.

His personal story is the perfect example of the damage inflicted on a community that was marginalised to begin with. This type of treatment only intensifies a community's distrust of those in power and increases their sense of isolation.

That he is also able to provide a detailed analysis of the racist and neo-colonial philosophies that underpin the methods employed by the so-called anti-terrorist units around the world makes this book even more compelling. The Suspect does a fine job of not only detailing the draconian methods employed by the security services, but the author's first-hand experience of being trapped in their crosshairs.

Sabir has created a fascinating book recounting his harrowing experiences at the hands of the security services in the United Kingdom. However, he also used his experiences as a springboard to take us deep into the way those forces work. This is a heart-wrenching and eye-opening examination of the overreach continually practiced by security services around the world. It is a must-read for anyone who cares about civil liberties.

It is possible to write about the Holocaust and the crimes of colonial powers without downplaying anything. In her latest book, Charlotte Wiedemann focuses on the numerous blind ... END_OF_DOCUMENT_TOKEN_TO_BE_REPLACED

The highly controversial Indian blockbuster "The Kashmir Files“, on the exodus of Kashmiri Hindus in the 1990s, is characterised by unilateral representations, negative ... END_OF_DOCUMENT_TOKEN_TO_BE_REPLACED

"Finding Home", the second album by Syrian-born, UK-based musician Maya Youssef, works through feelings of loss and destruction until its music reaches a place beyond war and ... END_OF_DOCUMENT_TOKEN_TO_BE_REPLACED

Written by the controversial Kuwaiti Shia preacher, Yasser Habib, the film's plot pursues two threads: one from the Islamic past, the other from the present. The narratives meet ... END_OF_DOCUMENT_TOKEN_TO_BE_REPLACED

END_OF_DOCUMENT_TOKEN_TO_BE_REPLACED
Social media
and networks
Subscribe to our
newsletter