Back to the Dark Ages: Open Season on Prisoners

In his book "Guantanamo Speaking", Roger Willemsen lets former inmates in the American prison camp have their say – creating a comprehensive document of an era stained by the perfidy of humiliation and torture. By Martin Gerner

In his book "Guantanamo Speaking", Roger Willemsen lets former inmates in the American prison camp have their say – creating a comprehensive document of an era stained by the perfidy of degrading interrogation techniques, humiliation and torture. By Martin Gerner 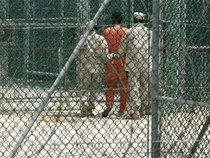 What is taking place in Guantanamo represents the greatest possible erosion of the concepts of freedom and the constitutional state, says Roger Willemsen

​​In the latest report issued by the US State Department on the status of worldwide human rights, all 196 UN member states are neatly listed. The list has just one flaw: the United States is missing.

One might well get the impression from this list that America feels, now more than ever – to loosely quote George Orwell – more equal than the rest of the world. The Bush administration justifies the omission of the USA on the list of human rights violations by pointing out the fully functional American press and a parliament that just passed a law against torture.

No admission to Guantanamo

These same US media enterprises, however, and not only them, are still not allowed access to Guantanamo to report on the situation there. So there is no way to monitor whether the prohibition against torture is actually being observed. The very fact that the law had to be passed in the first place amounts to an acknowledgement that torture took place – including at Guantanamo.

In the meantime, however, the question is no longer 'if,' but rather 'how.' Is torture even being carried out systematically? Roger Willemsen thinks so. The German TV host conducted interviews with five former Guantanamo inmates: two Russians, two Arabs and an Afghan.

The Americans were unable to prove any connection with the attacks of 9/11 for any of them. The detainees talk of being in solitary confinement and of the interrogation methods used on them, of desecration of the Koran and suicide attempts, and of their life prior to imprisonment.

The fact that their statements remain remarkably sober and objective makes the abundance of personal detail even more oppressive. "All they did was perform experiments on us," relates a Jordanian.

All sorts of horrific scenarios come to mind here, especially before the background of German history. Another interview subject adds, remembering being catheterized: "Well, they weren't really experiments. It was more like they were practicing."

This remark doesn't exactly serve to ease our anxiety. Nevertheless, at the latest when one comes to this passage, it is clear that the book is not suited for systematically substantiating suspicions of a "camp system" at Guantanamo. Neither does this seem to be the author's intention. Willemsen's interviews instead represent an effort to give the victims of anonymous imprisonment back their dignity.

Apparently obeying the motto "The more enemies, the greater the honor," Willemsen undertakes in his foreword a sweeping attack on the media, above all on German journalism. The Germans have never bothered to delve into what's really going on, he claims, accepting everything at face value and renouncing their liberal code of professional ethics.

The author presents himself, by contrast, as a latecomer arriving on the scene to disclose the whole truth. But the reality is of course not that black-and-white.

It is true that those reporting on the "war on terror" have often demonstrated a pattern of misplaced loyalty to politics and its decision-makers. In this light, Guantanamo seems to be a continuation of the war using corrupt means.

But Willemsen's claim that "political rhetoric has at no time been in keeping with the severity of the scandal" would be much more convincing had he himself sounded the alarm at an earlier date.

What the former detainees report to him of their experiences is quite detailed and new. As his critics point out, however, similar testimonies by other ex-inmates were published long before in several sources, including the documents of the Red Cross and the FBI.

Willemsen sees himself confronted with the accusation that he has written the right book at the wrong time. The fact is that, just two years ago, these kinds of interview were much more dangerous to conduct, both for the interview and the subjects.

It is true that all Guantanamo inmates signed an agreement (non-binding because under duress) that they would maintain silence as to what they had seen and experienced during imprisonment.

Now that some of the victims have decided to sue, however, such as German citizen Khaled El-Masri, released from a secret US prison in Afghanistan, and the proceedings are being covered by the media, the media environment has changed significantly for other ex-prisoners.

Palpable in Willemsen's interviews is that peculiar brand of American hubris that is fed by a Hannibal Lecter-like paranoia combined with a coldly calculated distortion of prevailing law. If Willemsen should prove to be correct with his prognosis, then we are experiencing the dawn of a century in which the medieval treatment of prisoners as fair game is once again the order of the day.

Guantanamo is the business of every politically acting person – in other words, all of us.

Precisely because what is taking place there amounts to the greatest possible undermining of the concepts of freedom and the constitutional state, one has to ask why, in Germany and elsewhere, demonstrations have not long been launched demanding the closing of the prison.

And also – as in Willemsen's foreword to the interviews – to what an extent an American president and his accomplices should be allowed to act as if they were above the law.

Guantanamo Bay
British Prisoners Released, Criticism Remains
Five British prisoners held at the U.S. prison camp on Guantanamo Bay have arrived in the U.K. But their return won't heal the rift between Europe and the U.S. on the controversial camp.

German Institute for Human Rights
Study Sees Human Rights Violated in Terror Fight
A new study commissioned in Berlin and released on Wednesday concluded that the fight against international terrorism should offer no justification whatsoever for the infringement of basic human rights. By Hardy Graupner

Germany
Bremen Guantanamo Inmate's Fate Unclear
Murat Kurnaz, a Turkish national and the only prisoner from Germany at the US military base in Guantanamo Bay, has been held there since early 2002. He now may have lost his right of residence in Germany. By Anja von Cysewski