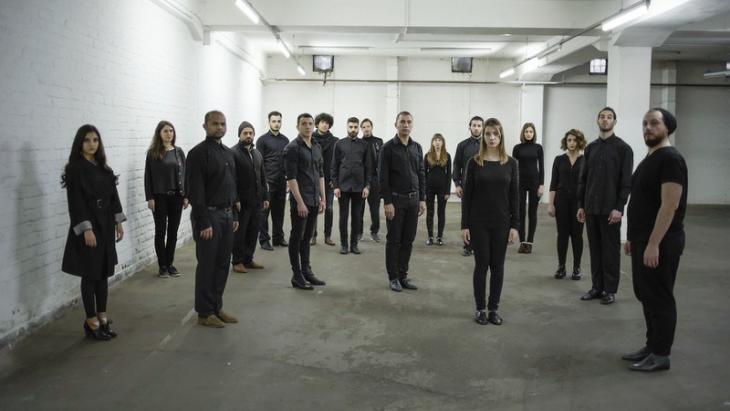 The art and theatre collective ″Ruhrorter″ in Mulheim, under the direction of Adem Kostereli, has already been working with refugees for five years. Their current project, ″Ich hielt in meinen Armen das Unmogliche″ (I held the impossible in my arms), explores themes of memory, loss and the limits of what words can express. By Sonja Galler

Refugee stories are currently being told in many German theatres. Most of them take a documentary approach and have the honourable intention of focusing their audiences’ attentions on the biographies of their marginalised subjects as well as on the individual voices behind those stories: ″They want to do something to counter the xenophobia. But does this itself not amount to a violation?″ asks writer Lena Gorelik in an article in the Zeit newspaper (available here in German).

Gorelik is clearly uncomfortable with the kind of work that features refugees telling their own authentic stories in which they are expected to appeal directly to the audience’s sympathy. The sort of work that presents the people on the stage only as refugees, purely as victims.

This feeling of unease about the theatre of self-presentation is shared by the art and theatre collective ″Ruhrorter″, which is based in the city of Mulheim in the Ruhr region of Germany. The collective, which has been working with refugees for five years now, has actively chosen to replace the documentary approach with theatrical abstraction, with de-individualised characters.

The stories presented are not the unique records of individual performers but rather of characters who, while they may have their origins in the real world, are no longer identifiable with the lives of any of the people involved, explains dramaturge Alexander Weinstock, of the Ruhrorter approach.

Exploring longing and loss with Goethe

It is not only audience expectations of intimate insights into the refugees lives that are deliberately overturned, the amateur actors, too, first have to learn how to achieve the formal distance required. The appropriate forms of presentation and expression demanded by the ″Ruhrorter″ approach are the result of many months of collective rehearsals by the group.

Starting point for the new work is Johann Wolfgang von Goethe’s collection of novellas ″The Conversations of German Emigrants″ (1795) a work that tells the story of a German noble family forced to flee their home after the invasion of French revolutionary troops. Other fragments of Goethe’s writings, songs and poems have also been incorporated into ″I held the impossible in my arms″.

The result is a multilingual elegy that combines French, Arabic and German voices encapsulating themes such as longing for a loved one (″a delicious yesterday″), loss and the transfiguring power of memory.

The limitations of language in the expression of suffering and joy are constantly present. The linguistic space created is a fragile one: neither the way to the microphone, nor the act of speaking is straightforward for the characters. It is often hesitant, painful, may even fail completely.

The way in which letters, recordings, singing and speaking voices mingle also serves to underline the aesthetic distance that is achieved from supposed personal experience. An interpretation that sees war and forced migration as altering not only our social interaction but also our spoken expression is only one of the many possible readings of this performance.

Dialogue is strikingly rare however, the characters relating to one another for only the briefest of moments. A community of sorrow in which the individual, despite the presence of others, remains isolated within the space. In the case of the Ruhrorter shows, this space is not the classic black box, but it is always an urban space with its own history. In the case of the current performance, for example, the old asylum-seekers' accommodation in the Ruhrorterstrasse or the Mulheim ″Feierabendhaus″, a residential complex for former miners.

This shift to the public space should be seen in the context of the aspiration to create a ″publicly visible and perceptible corrective to the stereotypical, stigmatising categorisation and exclusion of refugees and asylum seekers″ (Ruhrorter website).

Even if those behind the Ruhrorter project set great store on not using their art for social work purposes, their contextualising project remains both socially and politically committed. In addition to the location-specific theatrical productions and installations, process-related anthropological research and lectures are fundamentally important aspects of their work.

Home
Print
Newsletter
More on this topic
Refugee performers and their projects: No more tales of woeTheatre and the refugees: Getting the ball rolling"Queens of Syria" film and theatre project: ″I shall leave as my city turns to dust″
Related Topics
Migration, Migration in Germany, Performing arts, Refugees, Theatre in the Arab world
All Topics

Elke Muller is fighting for her daughter Anna, who fell in love with a young Afghan and converted to Islam. The mother spoke to Esther Felden about feeling alienated and her fear ... END_OF_DOCUMENT_TOKEN_TO_BE_REPLACED

As historian Wiiliam Dalrymple writes in his essay, scholars are only now beginning to realise the extent to which the Mughal emperors adopted what most would assume to be ... END_OF_DOCUMENT_TOKEN_TO_BE_REPLACED

There's not much to see yet, but it's clear that Cologne will be home to a new museum dedicated to migration. The government will provide funding to see the Central Museum of ... END_OF_DOCUMENT_TOKEN_TO_BE_REPLACED

Unable to travel to Munich to attend the presentation ceremony for his Geschwister-Scholl Prize, writer Ahmet Altan penned a message against hatred and nationalism from his prison ... END_OF_DOCUMENT_TOKEN_TO_BE_REPLACED
Author:
Sonja Galler
Date:
Mail:
Send via mail