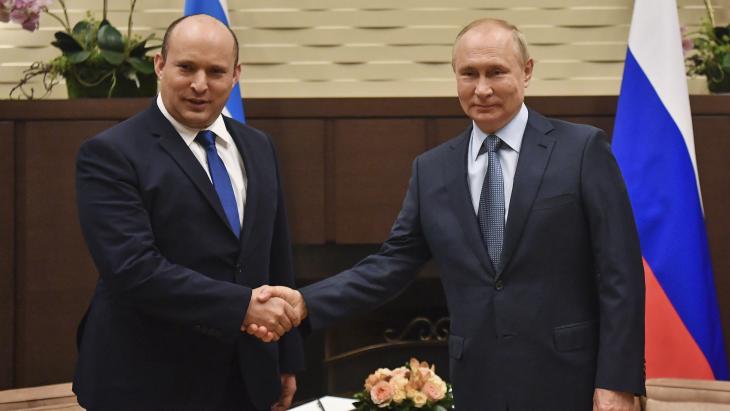 Russia and Israel are pursuing a common interest in Syria: they both want to combat Iranian expansionism. By Markus Bickel

The meeting between Russian President Vladimir Putin and Israeli Prime Minister Naftali Bennett in Sochi was warm and cordial. "I can tell you on behalf of the citizens of Israel that we consider you a true friend of the Jewish people," said Bennett when the two met for the first time in the Black Sea resort in late October. For his part, Putin described Russian–Israeli relations as "unique" and stressed that "our entire dialogue and all our relations are based on a very profound bond between our countries and peoples."

Four months after the new Israeli government took office, Bennett's visit was an opportunity to prove that the good relationship between the two countries is still very much alive despite the fact that Benjamin Netanyahu is no longer head of government in Jerusalem.

Putin and Bennett also made it clear that the good relationship also bears fruit in difficult times – not least as far as Syria is concerned, where Israel wants to stop Iranian militias getting any stronger, while Russia has stood staunchly shoulder to shoulder with President Bashar al-Assad since its intervention in the war in 2015. Putin noted that despite certain problems relating to the situation in Syria, "there are also points of contact and opportunities for cooperation, especially where matters related to fighting terrorism are involved."

The new Israeli foreign minister, Jair Lapid, and his Russian counterpart Sergey Lavrov had already set a similar tome when they met in September. "We are against Syria turning into an arena of confrontation between third countries," said Lavrov in Moscow at the time. "In this regard, we do not want the Syrian territory to be used against Israel, against anyone else."

Hundreds of attacks on pro-Iranian positions in Syria

In order to ensure that the Israeli Air Force and Russian troops don't get in each other's way in Syria, the two countries put a so-called 'deconfliction mechanism' in place some time ago. As part of this mechanism, officers on both sides meet regularly and there is a direct line between the command headquarters of the Israeli military leadership and the Russian army. In 2018, Russian–Israeli relations were really put to the test when a Russian fighter jet was shot down. Syrian forces were responding to an Israeli air attack and mistook a Russian reconnaissance plane for Israeli jets. All 15 crew members in the Russian plane lost their lives. 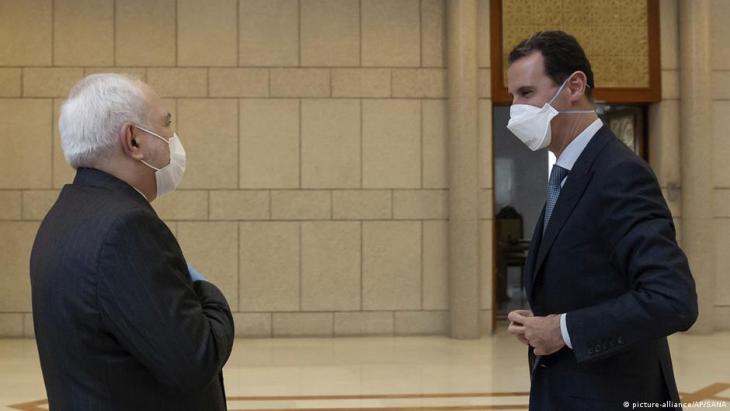 Keeping their distance, but only when it comes to COVID-19: Syria's President Bashar al Assad with close ally Javad Zarif, Iranian Foreign Minister under President Rouhani until June 2021. It is in the common interest of Israel and Russia to limit Iranian influence in Syria, writes Markus Bickel in his analysis. At their meeting in Sochi, Russia's President Putin and Israel's new Prime Minister Naftali Bennett reaffirmed their cooperation. For Israel, Iranian influence in Syria is particularly threatening, but at the same time Assad is seen as a guarantor against the strengthening of Islamist militias on Israel's northern border

These recent high-level meetings show that all this is in the past. So too is the bilateral tension that was fuelled in the summer by statements made by Russian Rear Admiral Vadim Kulit, deputy head of the Russian Centre for Reconciliation of the Opposing Parties in Syria. Speaking in July, Kulit claimed that the Syrian Army had – with the help of a Russian surface-to-air missiles – shot down more than ten Israeli missiles near Aleppo and Homs. This fed speculation that Russia was no longer willing to tolerate Israel's proxy war against Iran in Syria.

Since the war began in Syria ten years ago, Israel has flown hundreds of missions, targeting the positions of pro-Iranian militias. The transportation of arms to the Lebanese Hezbollah, which is bankrolled by and politically dependent on Iran, is also a regular target for the Israeli Air Force. In October and November alone, there were seven attacks on command centres and convoys near Homs and Tartus close to the Russian air base Hmeimim.

The Syrian Army rarely succeeds in hitting Israeli missiles with its old Russian SA-17 and SA-22 surface-to-air missiles. In early September, for example, a defence missile landed close to Tel Aviv; the Israeli F16 fighter jets, which had previously fired dozens of rockets around Damascus, returned to base unharmed.

Kulit's statement that Russian BUK 2ME medium-range defence missiles were used in July is being interpreted as Moscow using the changing of the guard in both Washington and Jerusalem to test the relationship between Bennett and U.S. President Joe Biden. After the meeting between Bennett and Putin, one thing is clear: neither Moscow nor Jerusalem is interested in changing the existing rules of play in Syria.

Putin wants good relations with Israel - even after Netanyahu

This means that Russia will – as it has done since the start of its military intervention in 2015 – support Syrian leader Bashar al-Assad in his attempt to regain complete sovereignty over his territory, side by side with Iran, which helped crush opposition militias by sending in its Revolutionary Guards and Hezbollah. It also means that Israel can continue to attack arms convoys destined for Hezbollah and the positions of pro-Iranian militias without criticism from Russia.

As it is, the relationship between Assad's two allies, Iran and Russia, is not all plain sailing – especially in the border region near Jordan and Israel, where the uprising against the Assad dictatorship began in 2011. Although a ceasefire agreement brokered by Moscow in September provides for the return of Syrian government troops to the city of Daraa al-Balad and the integration of opposition militias into the regular armed forces, the Damascus regime's hope that pro-Iranian groups would follow has been knocked on the head.

Still in the region, which was held by anti-Assad units until heavy fighting broke out in the summer, is the Eighth Brigade, a sub-division of the Fifth Corps that was established by Russia and is made up of opposition militias who agreed to the ceasefire. Assad supporters have repeatedly called the brigade a "band of thieves".

The fact that Lavrov specifically differentiated, during his meeting with Lapid, between "legitimate interests, such as Israel's security interests" and "illegitimate interests" is clear evidence that Putin's government is keen on maintaining good relations with Jerusalem even now that Netanyahu is no longer in office. Further evidence of this is the visit of King Abdullah II to Moscow last August, where the situation in Daraa al-Balad, which is close to the Jordanian border, was discussed at length. Directly after taking office, Bennett travelled to Amman to meet Abdullah II, a sign of rapprochement after Netanyahu had neglected relations with Jordan.

For this reason, Bennett's meeting with Putin could result in a further increase in Russia's influence in the Middle East. In recent years, Putin has strengthened his links to Saudi Arabia, the United Arab Emirates and Egypt – all traditional allies of the United States. The three states are at the forefront of the counter-revolutionary Arab alliance, to which Israel also feels affiliated since it established diplomatic ties with the Emirates and Bahrain a year ago.

This alliance could be the basis of a regional security structure, which might – in view of the USA's creeping withdrawal from the region – one day have to get by without American military might. Jordan and the Emirates' recent rapprochement with Assad show that this would, in the medium term, lead to Syria's return to the Arab League. This would certainly be in the interest of Israel, which while trying to curb Iran's influence in Syria, has always seen Assad as a guarantee against the growing strength of Islamist militias on its northern border.

Markus Bickel is a Middle East expert and head of the Rosa Luxemburg Foundation's Israel office in Tel Aviv.

In her latest exhibition in Japan, Farzaneh Khademian depicts figures who seem detached from their surroundings. In interview with Qantara.de, the Iranian photographer and painter ... END_OF_DOCUMENT_TOKEN_TO_BE_REPLACED

The catastrophic human rights situation in Bahrain is being largely ignored by the rest of the world. Despite all the damning evidence, which includes a Human Rights Watch report ... END_OF_DOCUMENT_TOKEN_TO_BE_REPLACED

Talks to salvage the 2015 Iranian nuclear deal have entered their eighth round in Vienna. Even if a deal is struck and some of the sanctions are lifted, the state of the Iranian ... END_OF_DOCUMENT_TOKEN_TO_BE_REPLACED

Every year in December, the team at Qantara.de takes a look back at the articles that proved most popular with our readers. This year is no different. Here is a run-down of the ... END_OF_DOCUMENT_TOKEN_TO_BE_REPLACED

Four musicians – two Iranian, two Indian – have created an album of music inspired by the poetry of Rumi. Like the poet's works, the album advocates tolerance, inclusivity and ... END_OF_DOCUMENT_TOKEN_TO_BE_REPLACED

END_OF_DOCUMENT_TOKEN_TO_BE_REPLACED
Social media
and networks
Subscribe to our
newsletter