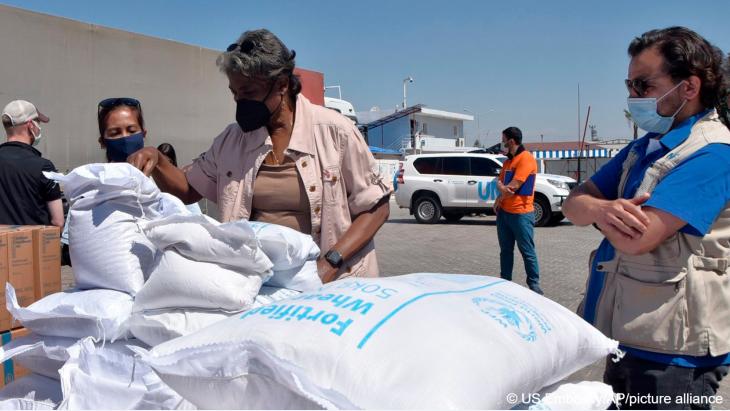 The Security Council headed toward approval of a U.N. resolution on Tuesday to extend humanitarian aid deliveries to 4.1 million people in Syria's rebel-held northwest, after Russia won its demand for only a six-month mandate.

Ireland and Norway, which had sponsored a resolution calling for a yearlong extension that was vetoed Friday by Russia, circulated a new draft on Monday that provides for a six-month extension of deliveries through the Bab al-Hawa crossing until 10 January 2023. As Russia demanded, a further six-month extension after that would require a new Security Council resolution.

Brazil's U.N. Mission, which holds the council presidency this month, scheduled a vote for Tuesday morning. The draft resolution is almost identical to the Russian draft resolution that failed to get council support last Friday.

At the heart of the apparent backdown by supporters of a year-long extension is Russia's adamant refusal to consider any timetable beyond six months, and the fact that the Security Council's last mandate, for a year, ended on Sunday, stranding U.N. cross-border deliveries.

The three other veto-wielding permanent council members – the United States, Britain and France – voted against it and 10 countries abstained. The vetoes were not needed, however, because the resolution failed to get the minimum nine "yes" votes required for approval.

U.S. ambassador Linda Thomas-Greenfield warned after Friday's votes that "I have long said this is a life-and-death issue" and "people will die because of this vote". Thomas-Greenfield, who visited Bab al-Hawa in June, said aid workers told her that a six-month renewal would be "a disaster" for their supply lines. They told her it "would mean lifesaving assistance would shut off in the dead of winter when needs are at their highest, which would be a nightmare scenario for a region where millions of people are still displaced".

But Russia's deputy ambassador Dmitry Polyansky told reporters there was "99% agreement" on a resolution and said Russia wouldn't support a nine-month extension, suggested as a compromise by Brazil and the United Arab Emirates.

Unless council members decide to go with the Russian six-month proposal, Polyansky said, he saw no possibility for an agreement. Asked whether that meant that Russia would veto any proposed resolution that didn't follow its draft with a six-month timeline, he replied: "Obviously."

That left the rest of the council with no alternative but a six-month extension if they want to see the continuation of cross-border deliveries that Secretary-General Antonio Guterres and more than 30 non-governmental organizations also consider crucial.

One addition to the new draft calls for Secretary-General Antonio Guterres to provide a report on humanitarian needs in Syria by 10 December to assess the impact of a possible border closing in January if the resolution isn't renewed.

The draft also calls for Guterres to brief the council monthly and issue reports at least every 60 days on the progress of cross-line deliveries, humanitarian assistance delivered from Turkey, and "early recovery project in Syria that Russia has pushed for.

Northwest Idlib is the last rebel-held bastion in Syria and a region where an al-Qaida-linked militant group, Hayat Tahrir al-Sham, is the strongest. The U.N. said recently that the first 10 years of the Syrian conflict, which started in 2011, killed more than 300,000 civilians, the highest official estimate of civilian casualties.

Russia, a close ally of Syria's government, has repeatedly called for stepped up humanitarian aid deliveries to the northwest from within Syria, across conflict lines. This would give Syrian President Bashar Assad's government more control.

In early July 2020, China and Russia vetoed a U.N. resolution that would have maintained two border crossing points from Turkey for humanitarian aid to Idlib. Days later, the council authorised the delivery of aid through just one of those crossings, Bab al-Hawa. In a compromise with Russia, that one-year mandate was extended on 9 July 2021, for six months, with an additional six months subject to a "substantive report" from U.N. Secretary-General Antonio Guterres. This was effectively a year-long mandate because a second resolution wasn't needed.

Before last week's vote, U.N. spokesman Stephane Dujarric called cross-border aid critical for men, women and children in the northwest and stressed the importance of long-term planning, including costs, in supporting a year-long extension.    (AP)

More on this topic
Syria and Ukraine: Humanitarian aid is Russia's political footballSyrians and the Ukraine war: "We share a similar suffering"Russia's interventions in Ukraine and Syria: What drives Putin is evident from Syria
Home
Print
Newsletter
MoreAll Topics

END_OF_DOCUMENT_TOKEN_TO_BE_REPLACED
Social media
and networks
Subscribe to our
newsletter