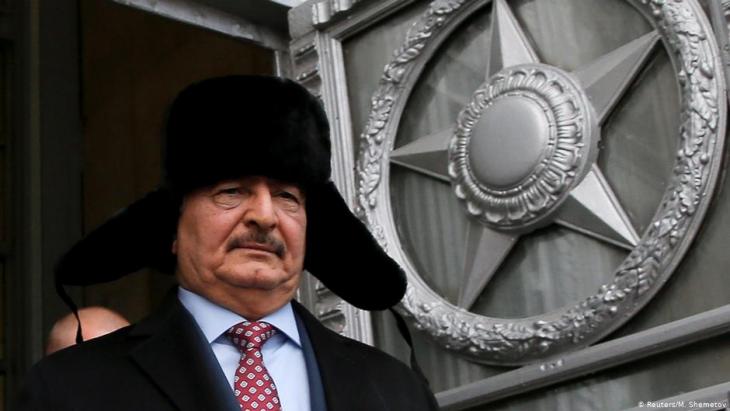 Backing Haftar to the hilt?

The rumours that Libyan General Khalifa Haftar has Kremlin support are as consistent as his advance on the country's capital. In Syria, Russia has flexed its military muscles – but it isn't yet showing its cards on Libya. By Emily Sherwin

As the conflict in Libya heats up, the words out of Moscow have remained cool and rational. During a recent visit to Egypt, Foreign Minister Sergei Lavrov said that Russia's "task is to help the Libyan people overcome their current differences of opinion and come up with a stable agreement" to reconcile the sides. And at the beginning of last week Kremlin spokesman Dmitry Peskov said that Russia will use every possible opportunity to call on all sides to avoid causing bloodshed and "deaths in the civilian population."

Since early April, the forces of military strongman Khalifa Haftar (above) have been pushing towards the Libyan capital, Tripoli. That is where the internationally recognised government of Prime Minister Fayez Sarraj is based, which has accused Haftar of attempting a coup. Haftar heads the self-titled Libyan National Army, which is backed by a rival government in the east of the country.

Russia seems to be trying to avoid taking a clear side in the escalating conflict. "It's a very delicate diplomatic situation for Russia," says Viacheslav Matuzov, a long-term diplomat now working as an independent Middle East expert. Various Russian allies support different parties in the conflict: Turkey and Algeria, for example, support the UN-backed Tripoli government, while Egypt and Saudi Arabia back General Haftar.

Going beyond the Libyan conflict, both Algeria and Egypt are top buyers of Russian weapons. And Turkey is an important partner for Russia internationally, both in the conflict in Syria and with the increasing rifts between Turkey and NATO, an alliance which Russia sees as a threat. On top of all that, Russia needs to keep Saudi Arabia onside as a fellow oil giant. 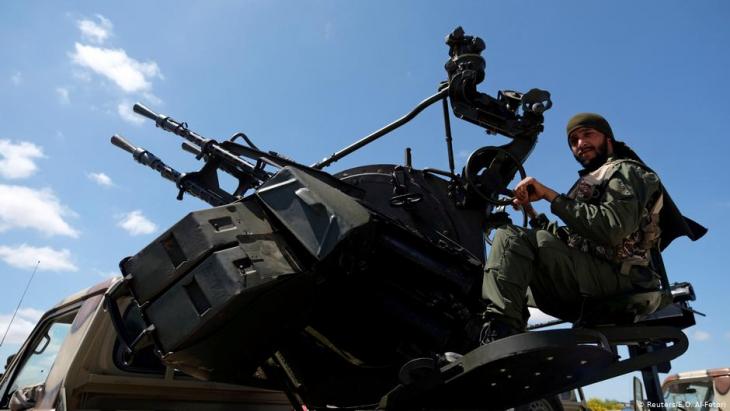 Money talks: Khalifa Haftar is in charge of nearly all of Libya′s oil-producing regions. "That means he has the money – which means he is important for Moscow," comments independent Russian military analyst Pavel Felgenhauer. He argues that despite the UN arms embargo on Libya, Moscow could be angling to sell Haftar weapons – or even already be selling them

Matuzov argues that the main reason Russia is nevertheless involved in this diplomatic muddle is Moscow's fear that the chaos in Libya could allow the resurgence of Islamic State, which would be a serious security concern for Moscow.

Independent Russian military analyst Pavel Felgenhauer agrees that Libya is a diplomatic "conundrum" for Moscow. "Russia will be treading very cautiously in the conflict," he says. It "will not declare its allegiance openly." But while Matuzov insists Russia is as neutral as its official statements are, Felgenhauer argues, "it's obvious that Moscow is supporting Haftar" behind closed doors – something that the Kremlin has denied.

In fact, both General Haftar and Prime Minister Sarraj have visited Moscow, but Haftar seems to have the edge in the Kremlin. He has visited three times since 2016 and was even taken aboard Russia's flagship aircraft carrier Admiral Kuznetsov in 2017, reportedly for a video conference with Russia′s Defence Minister Sergei Shoigu.

Saturday's historically low election turnout was a reflection of Algerians' ongoing frustration with the political status quo. Faced with mounting state repression, however, the ... END_OF_DOCUMENT_TOKEN_TO_BE_REPLACED

Algerian scholar Said Djabelkhir rejects the charge of "offending Islam". In interview with Ismail Assam, he maintains that he has been wilfully misconstrued. At the same time, he ... END_OF_DOCUMENT_TOKEN_TO_BE_REPLACED

Morocco and the European Union are at cross purposes when it comes to the Western Sahara. And, as Germany does not support Moroccan claims to the territory, a major conflict has ... END_OF_DOCUMENT_TOKEN_TO_BE_REPLACED

Recep Tayyip Erdogan, disappointed by the European Union’s reluctance to integrate Turkey into its ranks, has re-directed his country’s diplomacy toward the Maghreb and Africa to ... END_OF_DOCUMENT_TOKEN_TO_BE_REPLACED

Using a graphic novel to address a contentious issue like the Algerian war of independence may seem an odd choice, but new release "Algeriennes", translated into English by Ivanka ... END_OF_DOCUMENT_TOKEN_TO_BE_REPLACED

Since February 2019, millions of Algerians have been demonstrating against the government. They first took to the streets to demand more democracy and protest the renewed ... END_OF_DOCUMENT_TOKEN_TO_BE_REPLACED
Author:
Emily Sherwin
Date:
Mail:
Send via mail

END_OF_DOCUMENT_TOKEN_TO_BE_REPLACED
Social media
and networks
Subscribe to our
newsletter