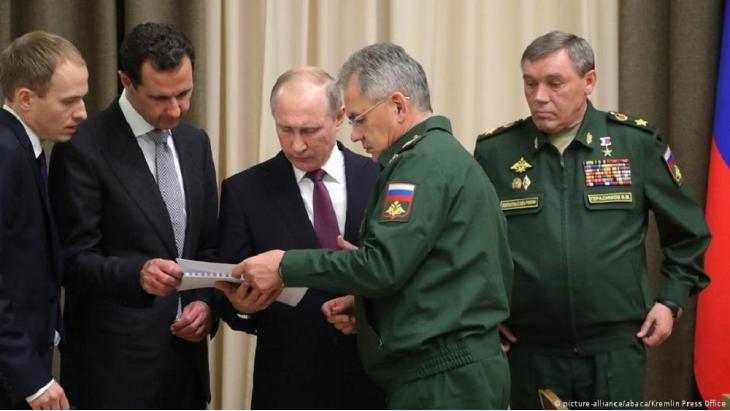 Anyone wishing to know how far Putin will go in Ukraine should look to Syria. There, the Kremlin has been successfully asserting its own interests for years – with military ruthlessness, diplomatic pressure, brazen propaganda and tactical agility. Commentary by Kristin Helberg

Vladimir Putin has done it – Russian troops are attacking Ukraine. For the people of Syria, Russian soldiers and fighter jets have been part of everyday life for years, used by Moscow to keep President Bashar al-Assad in power. Putin's methods in Syria shed light on his foreign policy actions and geostrategic self-image. Four characteristics of the Kremlin leader are axiomatic.

The Russian president aspires to communicate with the powerbrokers of this world on equal terms. He runs an empire and is looking to be treated accordingly. That is exactly what he has achieved in Syria – with diplomatic weight, military strength and propaganda.

As a permanent member of the World Security Council, Moscow has held its protective hand over Assad for eleven years; between 2011 and 2020, Russia blocked 16 UN resolutions on Syria. This means that crimes under international law committed by the Syrian regime cannot be referred to the International Criminal Court in The Hague. UN aid, which is worth billions and is financed to 80 percent by the USA and Europe, is misused by the Syrian regime to maintain power. This is because aid has to be distributed in agreement with Damascus and therefore does not reach the neediest Syrians, but those who are particularly loyal instead.

Only the extremist-controlled province of Idlib, a refuge for millions of Assad opponents, still receives direct humanitarian aid from abroad. The UN Security Council has to renew this cross-border access every six months, at which point the West begs Putin to be allowed to provide humanitarian aid. In terms of diplomatic status, Syria has served the Kremlin leader well.

If resolutions cannot be prevented, Russia waters down their content. The best example of this is Resolution 2254 from December 2015 – the UN document that all actors in the Syria conflict still refer to today. The resolution was the result of intensive talks between Moscow and Washington in October 2015, the only serious diplomatic initiative to resolve the conflict with the International Syria Contact Group to date. Both countries were already militarily engaged in Syria at the time – the U.S. from September 2014 to combat the so-called Islamic State (IS), Russia from September 2015 to bail out Assad, who had lost control over large swathes of the country. Foreign Minister Sergei Lavrov and his then counterpart John Kerry considered each other equals – only one and a half years after President Barack Obama demoted Russia to "regional power" in March 2014.

Resolution 2254 called for an end to attacks on civilians, unimpeded humanitarian access and the release of those arbitrarily detained. For months, Lavrov and Kerry attempted to de-escalate the situation – without success. After all, Resolution 2254 included a loophole, at Moscow's instigation, namely that of the "anti-terror fight". The text explicitly allowed the continuation of attacks on terrorist groups such as the IS and the Nusra Front and groups allied with them. This was the carte blanche the Assad regime needed to continue sealing off all opposition regions, bombing them and thus continuing its war against civilians.

Russia not only became the decisive partner in this campaign, but also the game-changer of the war. From the summer of 2015 onwards, Putin sent troops and military equipment at Assad's request – hoping that by getting involved in Syria he would also end his international isolation triggered a year earlier by the annexation of Crimea. Damascus granted Moscow free and unlimited use of the Hmeimin airport southeast of Latakia, which Putin has since expanded into a Russian airbase where nuclear-capable bombers can land. 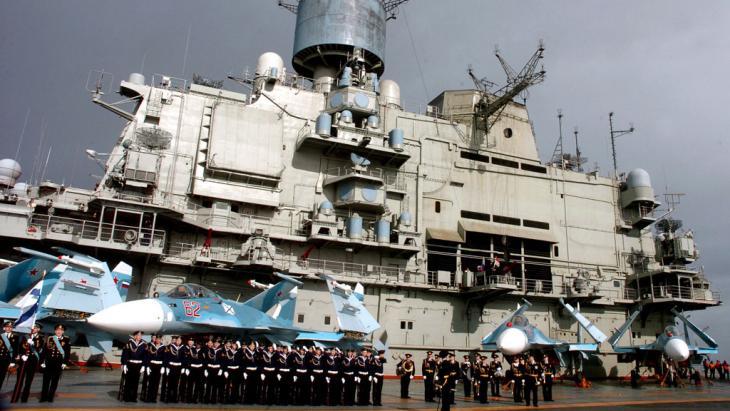 Military hub Tartus: Moscow has maintained a base in the Syrian port city since 1977 – the last one in a distant foreign country to remain following the collapse of the Soviet Union. After the Russian military intervention in 2015, Damascus granted Moscow free and unlimited use of the Hmeimin airport southeast of Latakia, which Putin has expanded into a Russian airbase where nuclear-capable bombers can now land

The supply of personnel and weapons also runs via the Russian naval base in Tartus, which Moscow has maintained since 1977. As Russia's only access to the Mediterranean, it is of great strategic importance, serving Putin's goal of preventing NATO naval domination in the region. Most recently, Russian warships launched from Tartus in the direction of Ukraine, indicating that Moscow is already using the base to counter NATO expansion.

Russia's entry into the war alongside Assad turned the tide in 2015. Because Putin intervened at Damascus' invitation, his intervention in Syria – unlike the current war of aggression against Ukraine – is not illegal under international law. Indeed, his disregard for international law has been evidenced far more by the way he engages militarily. The Russian air force bombs residential areas in Syria without regard for civilians. Its targeted attacks on hospitals, schools and markets, as well as the use of incendiary bombs, cluster munitions and vacuum bombs in civilian areas, have been documented many times and do not bode well for the people of Ukraine. The non-governmental organisation Airwars, which documents the airstrikes of all warring parties in Syria, estimates that more than 23,000 civilians have been killed by Russia, while Moscow claims that not a single civilian has been harmed.

This glaring contradiction makes Putin's third instrument all the more important – disseminating disinformation. He is not beyond using grotesque propaganda to discredit his opponents and justify his own actions.

The fact that he accuses Ukraine of "abuses and genocide" comes as no surprise to Syria watchers. Since 2016, for example, the Kremlin has been agitating against the Syrian civil defence organisation White Helmets – winner of the Alternative Nobel Prize – which documents its rescue missions with the help of handheld and helmet cameras. Russia considers the NGO a threat – after all, its videos regularly show the civilian victims of Russian missile strikes.

1/4 The Russian army has been training & testing its military arsenal for 7 years against Syrian civilians, hospitals, infrastructure, schools, roads & agricultural lands & against the command centers & positions of Syrian opposition fighters.

Russia's attempts to blame Assad's crimes on others as so-called "false flag" actions are also brazen. Especially when it comes to the use of chemical weapons, this has worked frighteningly well. Even when investigators from the United Nations and the Organisation for the Prohibition of Chemical Weapons (OPCW) concluded, as in the case of the sarin attack on Khan Sheikhoun in April 2017, that Damascus was responsible for the poison gas attack, other versions of the attack persist, because Russia has dismissed the investigations as frivolous and continues to make abstruse claims to this day. Putin has perfected the media strategy of spreading numerous narratives and contradictions about a certain event until the truth ultimately appears to be just one of several possible versions.

2. Putin is a tactician, not a strategist

Although it may seem so in retrospect, the Russian leader did not have a long-term strategy for Syria in 2011. The decision to keep Bashar al-Assad in power followed NATO's muscle-flexing in the region, especially in Libya. In March 2011, Moscow's abstention at the UN Security Council enabled NATO intervention in Libya, which bombed Muammar al-Gaddafi's regime out of existence a short time later, even though – according to the UN mandate – it was only supposed to protect civilians. This was not to be repeated in Syria under any circumstances, Putin decided. After all, once the region fell almost entirely under American influence over the course of the 2000s, Assad was Moscow's last ally in the Middle East.

Putin's plan for Damascus has thus been limited to preventing Western-backed regime change. The man in the Kremlin has become Assad's most powerful patron saint, indispensable for all parties involved and ultimately pulling the strings. Putin does not follow a rigid plan, but rather reacts to current events – the more dynamic they are, the better for Putin. As an impulsive autocrat he can use every crisis to his advantage, whereas Western politicians have to take public opinion into account, involve their parliaments and co-ordinate any action.

In September 2013, for example, Putin pulled off his greatest tactical coup. Following the poison gas attacks on the suburbs of Damascus on 21 August with more than 1,400 dead, U.S. President Obama was forced into action. One year earlier, the American president had called the use of chemical weapons a red line, now he was desperate to avoid a military strike, fearing the U.S. could be dragged into another war. Putin helped him out of his predicament. He committed the Syrian regime to the destruction of its chemical weapons stockpile by the OPCW, thus providing Obama with a welcome excuse not to attack. Instead of being punished for the gassing of hundreds of civilians, Assad became a partner, the OPCW inspectors received the Nobel Peace Prize shortly afterwards – and Putin appeared as the one to trust in a crisis.

Whenever an opportunity for action presents itself to Putin because other, primarily Western, actors leave a gap, he seizes it. Consequently, when it comes to managing a conflict with Putin, it is essential not to hesitate, but to proceed in a consistent and predictable manner.

Despite what heads of state may claim, the Russian attack on Ukraine is not a wake-up call for a self-confident Europe that defends its values. The war is accelerating the decline ... END_OF_DOCUMENT_TOKEN_TO_BE_REPLACED

At the EU's outer borders, the right of migrants to a fair asylum procedure continues to be systematically disregarded. Take Greece, for example: in the worst case scenario, those ... END_OF_DOCUMENT_TOKEN_TO_BE_REPLACED

Madrid's about-face on the Western Sahara conflict has enraged Algeria. Trade relations have been frozen unilaterally and a cut in gas supplies to Europe could be in the pipeline ... END_OF_DOCUMENT_TOKEN_TO_BE_REPLACED

Mourad al-Marouai was just nine when a landmine killed him on a beach in war-torn Yemen, a tragedy that will haunt his family forever. After a swim, the little boy "suddenly ... END_OF_DOCUMENT_TOKEN_TO_BE_REPLACED

A ceasefire has been in effect in Libya for the past year and a half. Yet after Russia's attack on Ukraine, another proxy war looms in Africa's most oil-rich country. Mirco ... END_OF_DOCUMENT_TOKEN_TO_BE_REPLACED

The Ukraine war has seen energy prices spike with oil producers in the Middle East making more money than ever. But will it put the brakes on long-planned reforms to diversify oil ... END_OF_DOCUMENT_TOKEN_TO_BE_REPLACED
Author:
Kristin Helberg
Date:
Mail:
Send via mail

END_OF_DOCUMENT_TOKEN_TO_BE_REPLACED
Social media
and networks
Subscribe to our
newsletter