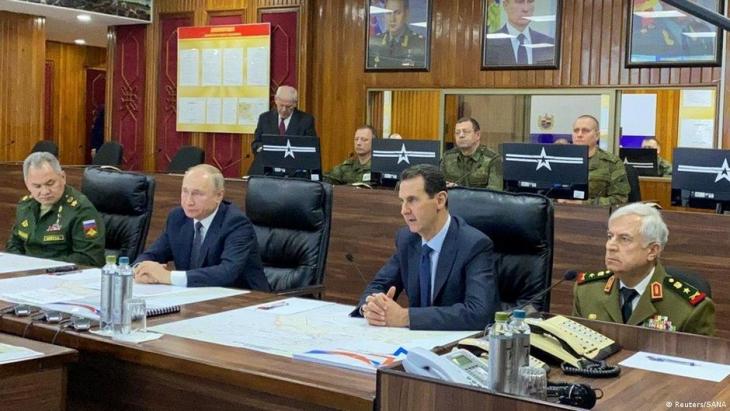 Russia's invasion of Ukraine
What impact on the Arab world?

Russia's invasion of Ukraine has strengthened the position of a number of Arab countries; after all, the West is likely to need urgent access to their oil and gas. Nevertheless, the rentier states remain uneasy at the prospect. By Christoph Ehrhardt

When Russian warships entered the Syrian port of Tartus at the beginning of the month, it was described in Moscow as part of a manoeuvre. Shortly afterwards, the flotilla, which is capable of landing operations, continued its journey into the Black Sea and joined the Russian deployment around Ukraine. It was one of many incidents to highlight the links between these two Russian theatres of massive power projection. For the longest time, the "Syria Express" mostly travelled in the other direction.

That's the name given to supplies shipped from the Black Sea port of Sebastopol in Crimea to Syria, where Russia intervened on the side of ruler Bashar al-Assad in September 2015.

Assad is said to have once told his Russian patrons that he would not run away like Ukrainian President Viktor Yanukovych, who was toppled in the 2014 revolution. Thanks to Russian military assistance, fleeing is no longer necessary. And the Syrian ruler does not have to fear being left without Russian protection should Vladimir Putin start a war in Ukraine.

For the Russian president, his military presence in Syria, which is after all a neighbouring country of NATO member Turkey, and the war in Ukraine are both part of Putin's larger struggle against the West. 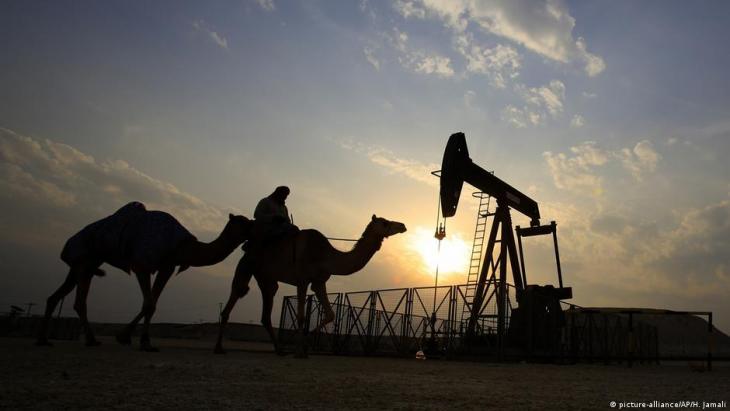 Unease in the Gulf: oil and gas producers like Saudi Arabia are benefitting from the situation in Ukraine because the West hopes they will step in and supply more if necessary. But Riyadh has long put out feelers to Moscow to pursue its security interests more independently of Washington. The greater U.S.-Russian tensions, however, the more difficult such a tightrope walk between Moscow and Washington becomes for the kingdom

In addition to the naval base at Tartus, Russia also maintains an airbase in Syria. The number of troops there, however, has always been limited, so that there should be no threat of forces being overstretched should the Russian ruler actually risk a new military adventure. Putin, who himself has praised the "invaluable experience" gained by the Russian military in Syria, has benefitted primarily from the dithering of his opponents over Syria. James F. Jeffrey, former American special envoy for Syria, warned in an opinion piece that Washington should be careful that Russia does not at some point follow its cynical and brutal, but demonstrably successful, "Syria rules" in other countries when it sees its interests threatened.

Russia has nothing to fear from the U.S. in Syria

Recently, it did not look as if the price for Putin in Syria would increase as a result of the Ukraine crisis. While the UN envoys from Washington and Moscow were engaged in a bitter exchange of blows on Ukraine in the UN Security Council at the end of January, according to a report by Internet portal Foreign Policy, a joint proposal was made by both to reduce the number of meetings on Syrian chemical weapons, i.e. to reduce the pressure on Assad.

Washington is actually keen to invest less diplomatic energy than before in Middle Eastern trouble spots. But it needs the oil and natural gas of the Arab Gulf states in the Ukraine crisis. They should help avert an energy crisis now that war has broken out. When the Emir of Qatar, Tamim bin Hamad Al-Thani, was hosted by the White House at the end of January, President Joe Biden announced in his presence that he would designate Qatar as an important non-NATO ally. What Biden did not mention in his tribute was the American desire for the emirate to step into the breach should natural gas supplies from Russia to Europe fail following Russia's invasion of Ukraine.

But in Doha – as in other Gulf capitals – the prospect of strengthening its own position is also accompanied by unease. This upgrade in diplomatic status may be a welcome change to the leadership in Doha, which sees itself surrounded by powerful rivals in the Gulf and therefore tries to make itself indispensable to powerful partners. Nevertheless, it has made clear that it will not be able to avert possible supply bottlenecks altogether. Foreign Minister Muhammad bin Abdulrahman Al-Thani has also said that Qatar will not be party to "any conflict or political polarisation". 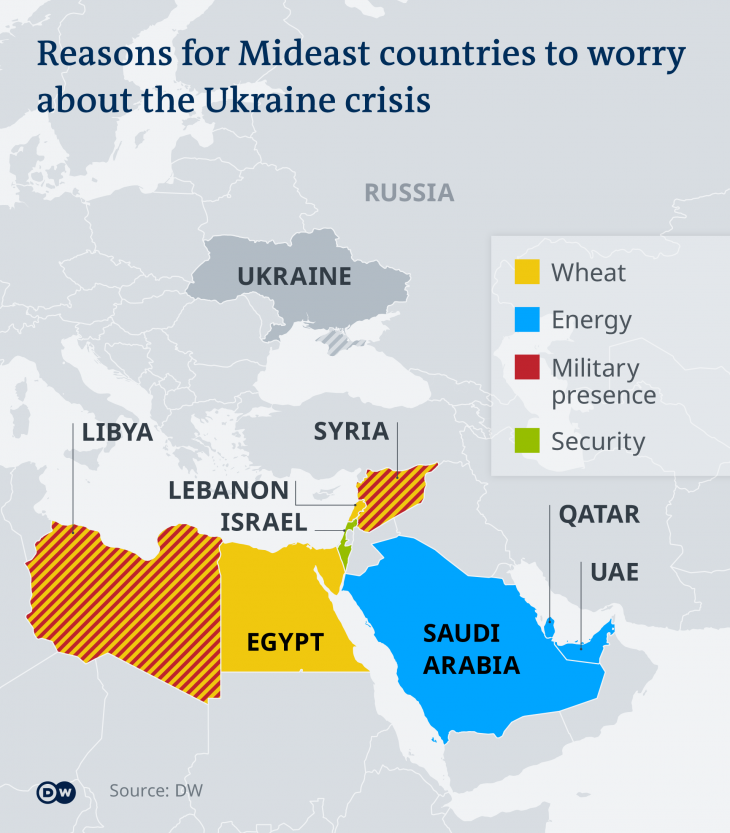 While the oil- and gas-exporting states are benefitting, Christoph Ehrhardt fears tangible repercussions at the dinner tables in other countries in the region, which could threaten social stability. Egypt, Lebanon or Yemen will not only have to cope with rising energy prices, but also with rising bread prices, because they import large quantities of Ukrainian wheat. In Lebanon, this covered about 40 percent of domestic consumption in 2020, according to the Food and Agriculture Organisation of the United Nations. Since then, the economic crisis has worsened drastically; more and more Lebanese are having difficulty finding enough food

Saudi Arabia faces similar trade-offs. With the onset of hostilities, Saudi oil has assumed major importance, thus strengthening the kingdom's market power (also with regard to Russian competition). It has also given Crown Prince Mohammed bin Salman, who is still struggling with the consequences of the brutal murder of his critic Jammal Khashoggi and would like to be rid of his persona non grata status, an effective lever. But Riyadh has long put out feelers to Moscow to pursue its security interests more independently of Washington. In August last year, Saudi Arabia and Russia signed an agreement to develop military co-operation. The greater U.S.-Russian tensions, however, the more difficult such a tightrope walk between Moscow and Washington will become.

The conflict in Ukraine will be felt at dinner tables throughout the region and could well threaten social stability. Egypt, Lebanon or Yemen will not only have to cope with rising energy prices, but also with rising bread prices, because they import large quantities of Ukrainian wheat. In Lebanon, this covered about 40 percent of domestic consumption in 2020, according to the Food and Agriculture Organisation of the United Nations. Since then, the economic crisis has worsened drastically; more and more Lebanese are having difficulty finding enough food. Bread is the most affordable staple; flour is subsidised from the central bank's threateningly dwindling reserves. And the population is already at its wits' end.

Since President Abdul Fattah al-Sisi seized power in Egypt in 2013, he has ruled the country with an iron fist. Civil society, opposition and free press struggle to survive. Tens ... END_OF_DOCUMENT_TOKEN_TO_BE_REPLACED

The lack of grain supplies from Ukraine is forcing Egypt to act. Now even the Toshka project is being revived to grow grain in the desert. Birgit Svensson travelled to see it END_OF_DOCUMENT_TOKEN_TO_BE_REPLACED

In this unusually beautiful book of images and text, published in German and Arabic, artist Marianne Manda presents her own unique take on the megacity of Cairo. In over fifty ... END_OF_DOCUMENT_TOKEN_TO_BE_REPLACED

A stage, lights, a mesmerised audience: it looks like an Egyptian folkloric concert, but Umm Sameh is singing to heal the sick by driving out the demons that possess them END_OF_DOCUMENT_TOKEN_TO_BE_REPLACED
Author:
Christoph Ehrhardt
Date:
Mail:
Send via mail

END_OF_DOCUMENT_TOKEN_TO_BE_REPLACED
Social media
and networks
Subscribe to our
newsletter