Three-time Lebanese Prime Minister Saad Hariri was renamed to the post on Thursday to create a reform-orientated cabinet that can lift the country out of its worst economic crisis in decades.

Hariri, 50, made his comeback to take on the difficult task almost a year after stepping down under pressure from an unprecedented protest movement demanding a complete overhaul of Lebanon's political system.

The country is under huge international pressure to form a crisis cabinet of independents to address a plummeting economy made worse by the coronavirus pandemic and the devastating blast at the Beirut port on 4 August.

Immediately after President Michel Aoun named him, the returning premier vowed to form a cabinet of experts, in line with conditions set by French President Emmanuel Macron to help rescue the corruption-ridden country from crisis.

Hariri said he would "form a cabinet of non politically aligned experts with the mission of economic, financial and administrative reforms contained in the French initiative roadmap".

"I will work on forming a government quickly because time is running out," he said, calling it the country's "only and last chance".

Cabinet formation is often a drawn-out process in Lebanon, where a complex governing system seeks to maintain a precarious balance between its various political and religious communities.

Hariri himself took eight months to hammer out his last cabinet after 2018 parliamentary elections.

His nomination was backed by a majority of 65 lawmakers, while 53 abstained from naming anyone during consultations with the president. 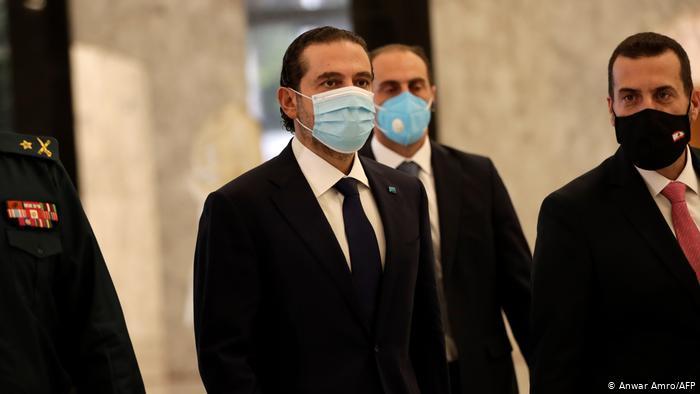 The parliamentary bloc of the powerful Shia Muslim movement Hezbollah did not give the president a name of a preferred candidate, its representative said, but its main ally the Amal Movement supports Hariri's nomination.

The consultations come after Beirut's massive port blast killed more than 200 people and devastated swathes of the capital in the country's worst peacetime disaster.

The authorities said the explosion occurred after a fire broke out in a warehouse storing hundreds of tonnes of ammonium nitrate.

A probe into the cause of one of the largest non-nuclear blasts ever has resulted in the arrest of 25 people, including top port and customs officials.

But the group Human Rights Watch said on Thursday that the probe had failed to yield any credible results more than two months later, and reiterated its calls for "independent, international investigation".

"Political interference coupled with long-standing failings of the judicial system have made a credible and impartial domestic investigation seemingly impossible," the rights group said.

Lebanon has rejected an international investigation into the blast, but its probe is being aided by foreign experts, including from the FBI and France.

Outrage over the disaster blamed on official ineptitude led to the resignation of the government of prime minister Hassan Diab, who was replaced by a relatively unknown diplomat, Mustapha Adib.

But Adib faced resistance from some of the main parties and threw in the towel less than a month later, leaving Lebanon rudderless to face soaring poverty and the aftermath of the disaster.

Aoun warned on Wednesday that Lebanon's third prime minister in a year would have to spearhead reforms and battle corruption.

He also accused unnamed officials of blocking reforms long demanded by international donors, including power-sector reform and a forensic audit of the central bank.

"If Lebanon does not carry out the reforms it needs, it's the country itself that risks breaking up," he said. (AFP)

More on this topic
Emigrating from Lebanon: Traumatised Beirutis ready to "leave for good" One month after the Beirut port explosion: "We sweep trauma under the carpet and carry on"Overcoming fear and mistrust: Processing Lebanon's long legacy of collective trauma
Home
Print
Newsletter
MoreAll Topics

END_OF_DOCUMENT_TOKEN_TO_BE_REPLACED
Social media
and networks
Subscribe to our
newsletter