Figures from the latest official report of the domestic security service for the state of North Rhine-Westphalia point to the growing role of women in the Salafist scene: only 12 percent of the 3,000 supporters of the Salafist scene in NRW are female. But with 28 percent, the number of women who left Germany to join the self-proclaimed Caliphate was more than double that.

Mohammed has seen that returnees need a lot of help in all areas of life. One example she cites is that of dealing with bureaucracy when birth certificates or identity papers for children born in the "Islamic State" are missing.

"Then, of course, the officials say: 'Sorry, without those papers we can do nothing at all.' That causes a lot of frustration," Mohammed says. "On the other hand, it makes some of the women face the bitter truth and realise: 'Okay, this might be part of the price I have to pay for my decision to join the Caliphate.' Those are the people who reflect and are open to talk about their actions." 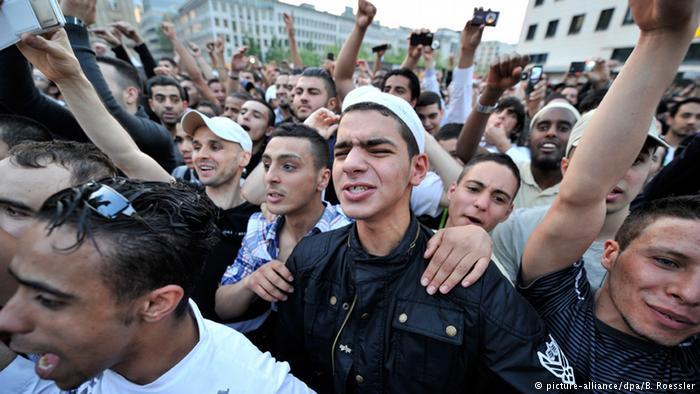 Extreme celebrity: before Salafists moved most of their efforts online, their preachers were celebrated like rock stars at public rallies, like here in Frankfurt in 2011

In counselling, Mohammed experiences a broad spectrum of feelings among her clients: "there is despair, hatred of everything and everyone, moments of remorse. But during the consultation process, we also reflect on achievements they reach after their return, no matter how small. That makes my heart rejoice." Returnees who completely shut themselves off very often are victims of violence, including sexualised violence, Mohammed explains.

Saloua Mohammed is convinced that no matter in which state of mind the women come back to Germany, they should be closely supervised and guided. Being left alone with feelings of powerlessness and disappointment, without help for a new start in Germany would make these women susceptible to extremist influences again.

"It literally makes me sick, when I think about extremists intercepting and addressing those disappointed and disillusioned women at the right moment," Mohammed says. If that happens, she says, there's a threat of even greater radicalisation.

Dalia Hatuqa is an experienced journalist who has reported on the Israeli-Palestinian conflict from Ramallah, Washington DC and Amman. A writer for Time Magazine, Foreign Affairs ... END_OF_DOCUMENT_TOKEN_TO_BE_REPLACED

Since President Abdul Fattah al-Sisi seized power in Egypt in 2013, he has ruled the country with an iron fist. Civil society, opposition and free press struggle to survive. Tens ... END_OF_DOCUMENT_TOKEN_TO_BE_REPLACED

Many Turks are dissatisfied with the international status of their country. At the same time, opinion polls reveal great scepticism among the Turkish population towards the USA. ... END_OF_DOCUMENT_TOKEN_TO_BE_REPLACED

The German government is planning to legalise cannabis before the end of this legislative period. So what does Islam have to say about its consumption? Will changing the law alter ... END_OF_DOCUMENT_TOKEN_TO_BE_REPLACED

END_OF_DOCUMENT_TOKEN_TO_BE_REPLACED
Social media
and networks
Subscribe to our
newsletter