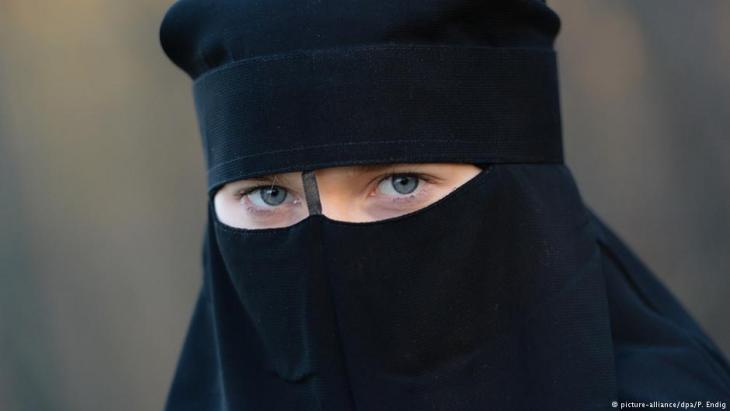 Iʹll wear a niqab if I want

Children's life choices are often difficult for parents to endure and even more difficult to understand. Especially when they embark on a path towards Islamism. An encounter with an affected mother. By Matthias von Hein and Esther Felden

It's something no mother would ever want to experience. The unexpected appearance of state security officers on your doorstep, to inform you that your daughter was planning to leave for Syria to allegedly join the terrorist militia "Islamic State."

But that is exactly what happened to Monika Muller. She recalls every detail of that particular day in 2014 when she was told about her daughter Sophia. Her shock was followed by relief: the police had been acting on false rumours the officers had seemingly picked up in a mosque. But how did Sophia and her family get to this point? Muller was willing to share her daughter's journey, but only on condition that her family's anonymity be protected.

In her early 60s, Muller is a woman who likes to laugh. Her alert face is framed by short red hair. She is a doctor in a mid-sized town in Germany's most populous state of North Rhine-Westphalia, where we met in her practice. We became aware of Muller through an aid project focussing on de-radicalisation. For two years now, she has been working with the project, trying to warn young people about the dangers of Islamist radicalisation. 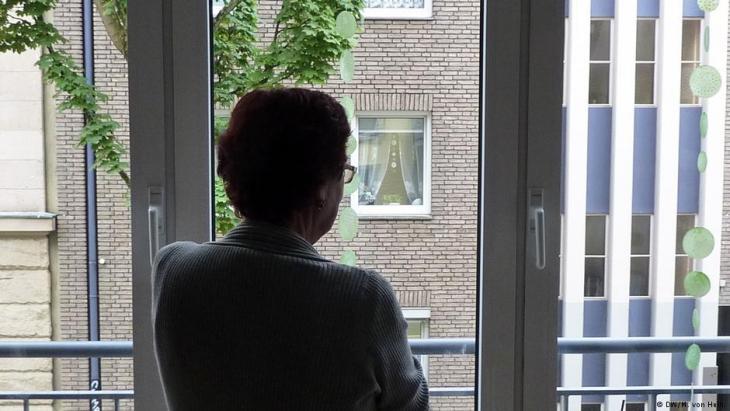 Trauma a reason for converting to Islam: Monika Muller attributes the fact that Sophia, who is now 24, converted to Islam as a teenager to an event that she describes only vaguely in conversation with us as a "traumatic experience outside the family"

During her talks, she always recalls her daughter: "Young people should be alert, so that they are not simply persuaded to do things by just anybody." She emphasises that this does not only apply to religious radicalisation: "It would be the same if the young people were right-wing extremists. Radicalisation can cause a family to break apart."

Muller's family is still intact. The mother maintains close contact with her daughter Sophia, who is now 24. They call and message each other almost every day and visit each other regularly. Sometimes they go out together – for example to the Christmas market. But that wasn't always the case. There were times of complete silence – sometimes for months, when the family's fabric disintegrated under intense pressure.

Through trauma to Islam

Monika Muller attributes Sophia's conversion to Islam as a young teenager to a great extent to an event that she prefers to describe only as a "traumatic experience outside the family." It profoundly changed Sophia, who was 12 years old at the time. Afterwards, her mother explains, she developed a strong desire for protection, a desire which ran through Sophia's life "like a red thread."

She turned to therapy, but then took a step that her mother found incomprehensible. "She convinced herself that she had to convert to Islam, because this religion could protect her better than the religion she grew up with," she remembers. Sophia had been baptised a Catholic and later she was also active as an altar girl in church services.

At the age of 16 the girl began attending the local mosque, secretly at first. Sophia surrounded herself almost exclusively with girls who "had an Islamic or culturally Moroccan, very patriarchal, background," her mother remembers.

When the daughter decided to don the headscarf at the age of 17, the peace in the family became disturbed: "Sophia has two siblings. There were always discussions. Always quarrels. We were insulted as infidels. Sophia always carried the Koran around with her. Or books like 'The Muslim woman, the Muslim marriage'." 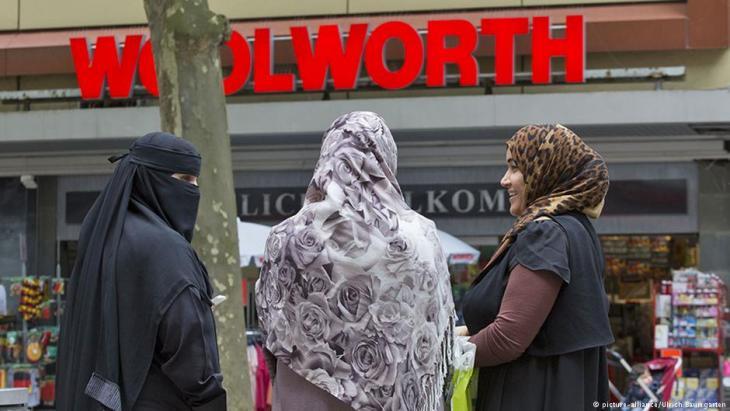 When she was 17, Sophia decided to wear the headscarf, but later that was no longer enough for her. Since then she wears niqab, like the woman on the left in the picture

First marriage as a teenager

Then, one day, Sophie disappeared. Unknown to her parents, she married a Turkish man. But the marriage didn't last very long. "The man wasn't devout enough for her and she came back to us. That's when we first thought: now it's over. Sheʹs seen sense. But that wasn't the case."

Instead, Sophia trawled Muslim marriage forums on the Internet, searching for an orthodox, strictly religious husband. Soon, the situation at home escalated yet again. Sophia's father took away her phone. She then dropped out of her vocational training programme shortly before she was set to graduate. Sophia left her parental home for the second time. "A few weeks later we learned that she was living in Munster [location changed during editing] and that she had married again. At that time she was already fully veiled, wearing the niqab", Monika Muller recalls.

Since then, Sophia has had two children and is pregnant with a third. Her mother feels that her daughter is leading a life based on an extremely regressive gender model where "the woman stays at home, looks after the children and makes sure that there is food on the table for her husband when he comes home".

Nevertheless, Muller tries to maintain "as normal a relationship with my son-in-law, who comes from Albania, as possible." Muller describes him as a fundamentalist who has travelled to Syria twice. She says he drove aid convoys there for "Medizin mit Herz" (Medicine with Heart), an organisation NRW's domestic intelligence agency, the Office for the Protection of the Constitution, classifies as an extremist Salafist group. Her son-in-law has since distanced himself from the organisation, reveals Monika Muller.

Monika Muller is aware that some fundamentalist families isolate their children, forbidding them to sing or watch television. But in the case of her daughter Sophia, the doctor is relieved that motherhood seems to have softened her extremely religious attitudes. At first, Sophia refused to send her children to kindergarten. But now, says Muller, she has realised the importance of "children growing up with others and experiencing a less limited view of the world."

The kindergarten has also helped her daughter to make new acquaintances: "Sophia doesn't have such a large circle of friends," says Monika Muller. "She's not from Munster. Her friends are mostly her husband's friends and family. My son-in-law has two brothers with children." 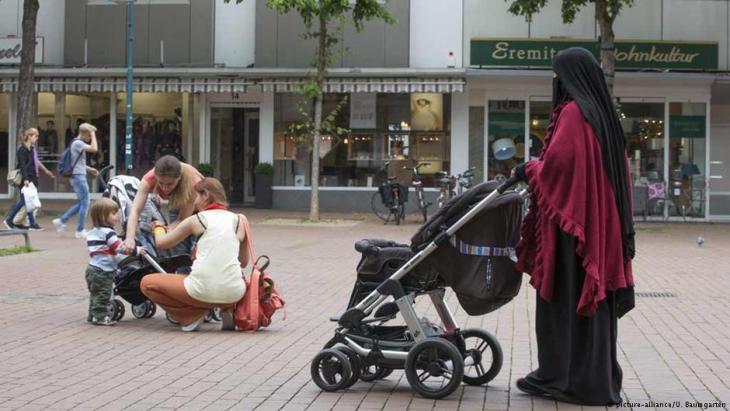 Just like this woman, Sophia pushes her pram through the city, fully veiled – and experiences hostility again and again

Spat at and bullied

The doctor is also encouraged by the fact that her daughter now takes off her niqab for her paternal family's reunions and weddings. At the same time, Muller gets angry when she talks about her daughter's experience of wearing her full-face veil in public.

"Sophia has often been spat at and jostled. Someone even stood up in front of her and said: 'Someone like you should be shot!' I have been standing next to her on the street and seen how people have insulted her." That's why Muller can understand why Sophia sometimes says: "It's not easy living in Germany."

In the past, her daughter would often talk about moving to an Arab country, to learn Arabic and study the Koran. But with time her daughter seems to have changed her mind, which she also puts down to her grandchildren: "My daughter has noticed that it is important for her children to receive a good education. And that is not so easy in Arab countries, especially not for a woman."

Monika Muller is no longer afraid that state security might suddenly appear on her doorstep, warning her that her daughter might pack up and leave for Syria. But German authorities are likely, she adds, to further monitor her son-in-law. Last year, Sophia and her family came back to find their flat had been searched while they were out.

Nine victims of the right-wing extremist murderer of Hanau had a migration background. The motive for the crime is clear and unambiguous: racism. Sheila Mysorekar from the "Neue ... END_OF_DOCUMENT_TOKEN_TO_BE_REPLACED

The template of the mentally disturbed gunman doesn't fit. Seeing himself as a spearhead, heralding a new rise to power, the murderer of Hanau placed himself squarely in the Nazi ... END_OF_DOCUMENT_TOKEN_TO_BE_REPLACED

A newly leaked document confirms how China is imprisoning Muslim minority Uighurs based solely on their religion. Naomi Conrad met with a whistle-blower and visited relatives of ... END_OF_DOCUMENT_TOKEN_TO_BE_REPLACED

Education is the key to the future. Muzoon Almellehan has known this since she was 14 years old. But she lives in a Jordanian refugee camp. And since then she has been fighting ... END_OF_DOCUMENT_TOKEN_TO_BE_REPLACED

Michael Frey has written a fascinating book about the contemporary political thinker Nassif Nassar. Since 1967, Nassar has devoted his life’s work to the question of a fair social ... END_OF_DOCUMENT_TOKEN_TO_BE_REPLACED

The Kurdish YPG militia did the heavy lifting in the fight against the "Islamic State", yet many foreign YPG adherents, including Germans, have come home to find themselves under ... END_OF_DOCUMENT_TOKEN_TO_BE_REPLACED
Author:
Matthias von Hein / Esther Felden
Date:
Mail:
Send via mail

END_OF_DOCUMENT_TOKEN_TO_BE_REPLACED
Social media
and networks
Subscribe to our
newsletter