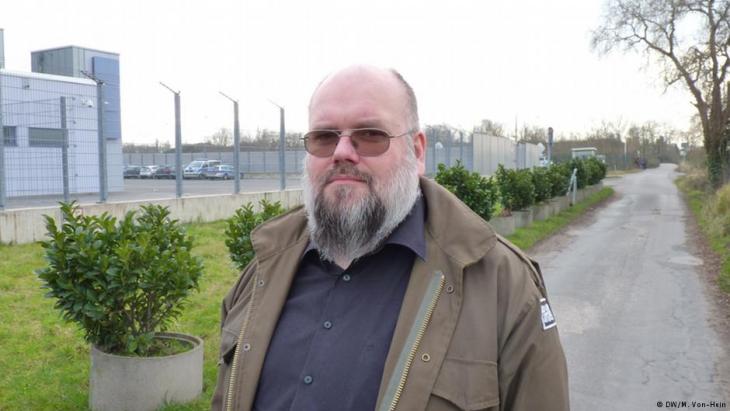 Bernhard Falk is no stranger to prisons. A convicted left-wing terrorist, he spent 12 years behind bars. Now he looks out for imprisoned Islamists. Germany's domestic intelligence agency considers him a danger to society. By Matthias von Hein and Esther Felden

One of the advantages of a constitutional state that ensures the rule of law is that it also applies those rights to people who deeply reject it. Even those who want to abolish the democratic system and fight by force for an Islamic state have the right to a fair trial with a lawyer of their choice. And this is exactly where Bernhard Falk's self-proclaimed line of work begins.

An imposing man with a large greying beard and balding head, he describes himself as a "first responder". Falk's places of deployment are courtrooms and prisons. He looks after Islamist prisoners and travels the country up and down: returnees from Syria who presumably fought for the self-proclaimed Islamic State (IS) or other jihadist groups; members of the German Salafist scene who are accused of having recruited for jihad or of having helped young men on their way out to the Middle Eastern war zone; Islamists who are suspected to have sent money or equipment to the IS area and radicalised people who are prosecuted for planning terror attacks in Germany. For Falk they are all "Muslim political prisoners of the Federal Republic of Germany."

Exactly 122 names are on the multi-page list which Falk presented to Deutsche Welle in a Frankfurt park. He has just attended the trial of Bilal Gumus in the adjacent District Court. Gumus is said to have helped a 16-year-old boy leave for Syria to join IS. Only a few weeks after his disappearance the schoolboy was killed.

It is no coincidence that Falk calls people like Gumus "political prisoners of the FRG (Federal Republic of Germany)." Nor is it a coincidence that in his YouTube videos he regularly describes Germany as the "heart of the imperialist beast": Bernhard Falk has a left-wing terrorist past. He committed several attacks, was convicted of attempted murder in four cases and served over 12 years in prison. He was released in 2008. 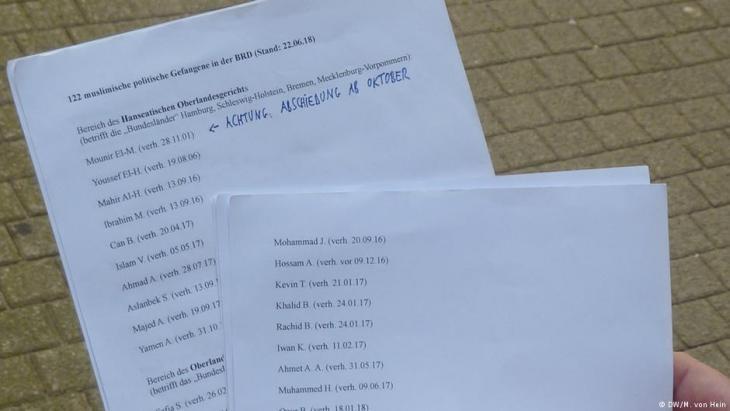 His time behind bars spurs him on, says Falk, especially the five years in pre-trial detention. "My trial at the Dusseldorf Higher Regional Court lasted 134 days. Based on this experience, I told myself that it was really time to help Muslim political prisoners who usually do not know their rights, to exercise them." Falk emphasises that his Muslim faith helped him to endure the long imprisonment.

The path to Islam did not come naturally to this German convert who grew up in the north of the country. He was raised in a Catholic family and was an altar boy for 10 years. While his brother became a Catholic priest, Falk studied elementary physics at university in Aachen.

A French artist has used photos of torture from Abu Ghraib for an oversized artwork at the Berlin Biennale. Reactions from fellow artists have been mixed, with some criticising ... END_OF_DOCUMENT_TOKEN_TO_BE_REPLACED

Since Ali Khamenei, Iran's most powerful man, has openly and unconditionally come out in support of Putin's war in Ukraine, logistical help is on its way, with an allegedly ... END_OF_DOCUMENT_TOKEN_TO_BE_REPLACED

It is possible to write about the Holocaust and the crimes of colonial powers without downplaying anything. In her latest book, Charlotte Wiedemann focuses on the numerous blind ... END_OF_DOCUMENT_TOKEN_TO_BE_REPLACED

This year Annemarie Schimmel, the great German scholar of Islamic studies, would have turned 100. Unique within the German and international academic community of her time, ... END_OF_DOCUMENT_TOKEN_TO_BE_REPLACED

The highly controversial Indian blockbuster "The Kashmir Files“, on the exodus of Kashmiri Hindus in the 1990s, is characterised by unilateral representations, negative ... END_OF_DOCUMENT_TOKEN_TO_BE_REPLACED

END_OF_DOCUMENT_TOKEN_TO_BE_REPLACED
Social media
and networks
Subscribe to our
newsletter