Through his studies he got to know an Iranian woman and, because of her, he engaged with Islam for the first time. In addition to what he called the "revolutionary potential of Islam", he was fascinated by "its logic" and its appeal to followers to use their senses. While Falk was still building bombs for the "Anti Imperialist Cells," the left-wing radical with Catholic roots became a Muslim.

"Brother" Muntasir bi-lllah, as he has called himself ever since, is extremely alert during conversation and chooses each of his words very carefully. Even if he is not a lawyer, the 51-year-old, dressed entirely in black, knows how far he can go without coming into conflict with the law. Open support for terrorist organisations such as IS or al-Qaida will not slip from his mouth. Instead, he expresses "understanding" that some people go the way of terror, a term Falk himself replaces with "militant resistance." "If people in certain countries feel the need to choose certain methods, that's their decision," he expounds and adds: "The fact that militant resistance exists all over the world is a fact – whether you like it or not"

The wife of the suspected ricin bomb-maker

Falk does not deny the fact that amongst the prisoners he looks after, some have "a criminal past from a German point of view. Prisoners are not heroes, after all." But he does not want to judge them. "I am someone who tries to show a certain solidarity regardless of what has happened in the case in question." 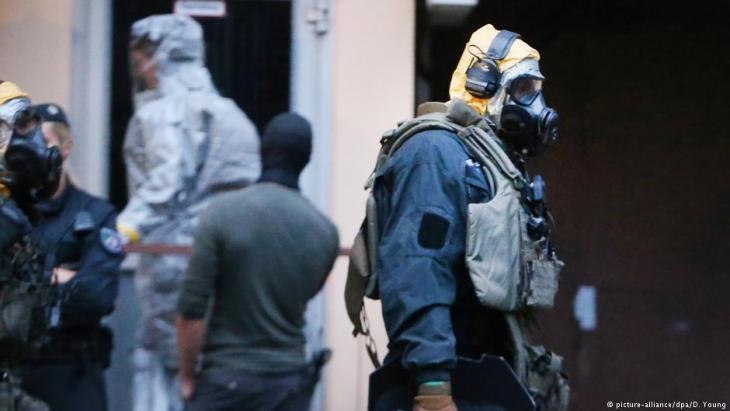 Ricin shock in June 2018: Sief Allah H. was working on a splinter bomb in Cologne containing the highly poisonous biological warfare agent Ricin. Investigators are now certain that he intended to use it to attack "infidels" – on behalf of IS. At the end of July, the Chief Federal Prosecutor arrested Sief Allah H.'s German wife Yasmin. Among other things, she is said to have helped him order the materials. H. had already procured far more than 3000 castor bean seeds. From these he produced 84.3 milligrams of castor oil. The Federal Prosecutor's Office has also accused him of deliberately producing biological weapons

That is why Falk also supports Salafist preacher Abu Walaa. The Iraqi-born man is regarded as IS' top ambassador in Germany. Walaa has been on trial in Germany since September 2017, accused of having recruited young men for IS' self-proclaimed caliphate. Falk also assists Sven Lau, one of Germany's best-known Salafists. Judges sentenced him to five-and-a-half years imprisonment in July 2017. According to the court, Lau had lured recruits for the jihadist militia "Jamwa" (Army of Expats and Supporters) in Syria.

Falk has also reached out to Yasmin H. She is the wife of the suspected Islamist terrorist Sief Allah H., who this summer became known as the "Ricin bomb-maker" of Cologne. Tunisian-born Sief Allah H. had ordered large quantities of castor bean seeds over the Internet. Additionally, he obtained chemicals with which he could have extracted highly poisonous ricin from the castor seeds. According to the police, there were also ingredients for an explosive device in his apartment.

Yasmin H. is said to have supported her husband in the preparations for the attack and she has been in custody in Gelsenkirchen since July. "When I visit the wife who has been imprisoned because of the so-called ricin case, I discuss with her whether her television set has finally arrived in her cell and whether she finally has a book to read," Falk says, describing his work.

When asked about his spiritual orientation, he points to the radical Wahhabist preacher Sulaiman al-Ulwan from Saudi Arabia, who advocates the theory of militant jihad. Al-Ulwan has justified suicide attacks against Jews and welcomed the destruction of the famous Buddha statues of Bamiyan by the Afghan Taliban. The fundamentalist preacher also praised the Taliban's late leader Mohammed Omar as "commander of the faithful".

Iranian artist Parastou Forouhar has lived in Germany since 1991. Full of rage, just like the protesters, she hasn't yet given up on the idea of justice. By Julia Hitz END_OF_DOCUMENT_TOKEN_TO_BE_REPLACED

Unflattering terms were used at a German Football Association human rights congress aimed at "intensifying the discussion" ahead of the World Cup. One speaker in particular made ... END_OF_DOCUMENT_TOKEN_TO_BE_REPLACED

Fariduddin Attar’s "The Conference of the Birds", one of the seminal works of Islamic mysticism, has recently been published in sumptuously illustrated German translation. It ... END_OF_DOCUMENT_TOKEN_TO_BE_REPLACED

Egyptian authorities have Mada Masr in their sights once again after critical reporting. But the editor of the country's last independent news source is adamant they will continue ... END_OF_DOCUMENT_TOKEN_TO_BE_REPLACED

Like Christianity, Europe's history is one of migration. Both have strong roots in the Orient and in cultures thousands of years old. Cultural historian Bernhard Braun invites us ... END_OF_DOCUMENT_TOKEN_TO_BE_REPLACED
Author:
Matthias von Hein & Esther Felden
Date:
Mail:
Send via mail

END_OF_DOCUMENT_TOKEN_TO_BE_REPLACED
Social media
and networks
Subscribe to our
newsletter