This ideological proximity to al-Qaida led to al-Ulwan spending time in Saudi prisons. Falk is also occasionally accused of being close to al-Qaida, most recently this September by Eren Recberlik. For years, the German security authorities classified Recberlik as a Salafist threat. He has since left the scene and is cooperating with the authorities.

Falk's name is regularly mentioned in the reports issued by Germany's domestic intelligence agency, the Office for the Protection of the Constitution (BfV), in the state of North Rhine-Westphalia, where he lives. The most recent report notes: "[Falk] is of the opinion that the Federal Republic of Germany is engaged in a fight against 'Islam' and stands for what he considers to be the urgently necessary 'Islamic resistance against the imperialism of the United States, the FRG and Israel.'"

The security agencies have taken note of his positive statements relating to al-Qaida groups and ascribe "Falk at least ideologically to the area of jihadist Salafism." Burkhard Freier, who heads the BfV in North Rhine-Westphalia, sees a great danger in Falk's care of prisoners. "In reality this is a care of extremists for persons who are to be kept in the extremist scene," he emphasised in interview with the Deutsche Welle. "The prisoners are to be prevented from any kind of re-socialisation."

Books in Cologne, children in Dortmund

Falk confidently counters this: "If the prisoners still have any social connections at all and can think and act socially after their imprisonment, then I have contributed to this. A collapsing or psychologically drifting prisoner can't be in the interest of the state either." On his Facebook page, Falk regularly asks others to write encouraging letters to imprisoned Islamists or to pray for them. He also appeals to donations for his work. "I depend on people from the scene, mostly relatives, to give me a donation so that I can travel to distant cities." 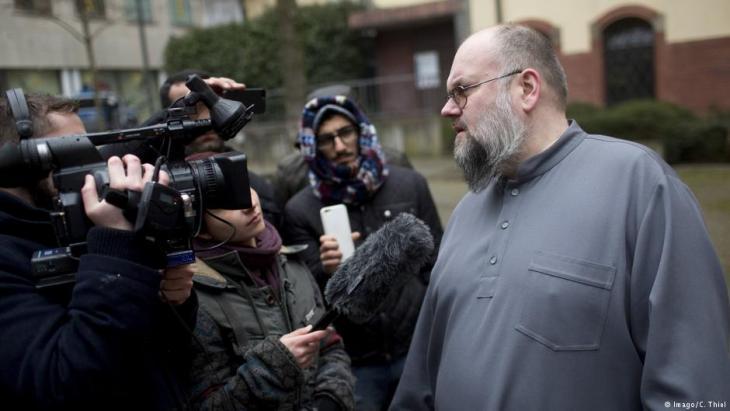 "Brother" Muntasir bi-lllah in the media spotlight: you won't hear open support for a terrorist organisation like the IS or al-Qaida coming from Bernhard Falk. But he does "understand" that some people go the way of terror – or in Falk's words, the way of "militant resistance". "If people in certain countries feel the need to choose certain methods, that's their decision," he expounds and adds: "The fact that militant resistance exists all over the world is a fact – whether you like it or not"

Falk is not in regular employment. He accuses the state police of creating bias against him among potential employers. He insists that he does not receive any state support, such as unemployment benefits or social assistance. Falk has no single apartment of his own, but he does have two wives: "You could say that my books are in Cologne. My children are in Dortmund. For space reasons alone, neither is conceivable within one apartment."

The children are also sometimes present on Falk's Facebook page, most recently when his daughter Shahida started school this summer. The fact that his daughter goes to a completely normal primary school doesn't seem to cause him any problems: "It's about teaching facts and language in a clean form. And everything that is part of a child's education," explains Falk. "A Protestant kindergarten or even a Christian school will certainly be able to do this," he says. "You can see from my example that one can also find the way to Islam as the son of a Christian head teacher."

In the eyes of the former left-wing radical, religion fits perfectly into his fight against what he still calls the "imperialism of the USA, the FRG and Israel" on his Twitter account. For Falk, Islam is "not only something purely contemplative. But it is something that affects all aspects of life including the social and political spheres." He sees it as his task "to refresh and update the political consciousness of Muslims a little bit."

Falk, however, says that he has little to do with the mainstream of Salafism which focuses on missionary work. "That is something that doesn't suit me at all." But despite differences of opinion with other leading figures of the scene, Falk's services are gladly accepted by Salafists of all currents when they are faced with arrest or house searches.

And something else is striking: Falk prays almost exclusively at home. He is no longer welcome in many mosques, which he also attributes to state pressure. "The mosques are afraid of being banned if they ignore the instructions of the state security agencies." He is a man who paints a picture of a highly gifted idealist on dangerous ground, stylising himself – and his religion – as a victim.

Iranian artist Parastou Forouhar has lived in Germany since 1991. Full of rage, just like the protesters, she hasn't yet given up on the idea of justice. By Julia Hitz END_OF_DOCUMENT_TOKEN_TO_BE_REPLACED

Unflattering terms were used at a German Football Association human rights congress aimed at "intensifying the discussion" ahead of the World Cup. One speaker in particular made ... END_OF_DOCUMENT_TOKEN_TO_BE_REPLACED

Fariduddin Attar’s "The Conference of the Birds", one of the seminal works of Islamic mysticism, has recently been published in sumptuously illustrated German translation. It ... END_OF_DOCUMENT_TOKEN_TO_BE_REPLACED

Egyptian authorities have Mada Masr in their sights once again after critical reporting. But the editor of the country's last independent news source is adamant they will continue ... END_OF_DOCUMENT_TOKEN_TO_BE_REPLACED

Like Christianity, Europe's history is one of migration. Both have strong roots in the Orient and in cultures thousands of years old. Cultural historian Bernhard Braun invites us ... END_OF_DOCUMENT_TOKEN_TO_BE_REPLACED
Author:
Matthias von Hein & Esther Felden
Date:
Mail:
Send via mail

END_OF_DOCUMENT_TOKEN_TO_BE_REPLACED
Social media
and networks
Subscribe to our
newsletter