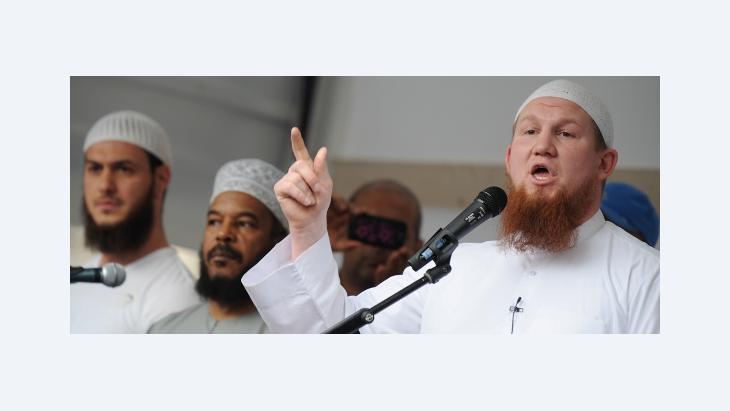 ﻿The Salafists are distributing copies of the Quran in Germany and making a big noise on the Internet about converting new followers to their cause. The country is now high up on the list of priorities for the Salafist movement, writes Josef Croitoru

Three hundred years ago, the Germans developed a custom of hailing the conversion of Muslims to the Christian faith with public church ceremonies. Today, the Salafists are doing the same thing – but the other way round: They are filming the conversion of Germans to Islam and posting the videos on the Internet as a sign of the victory of the "only true religion." That's what happened a few weeks ago in the Tauhid Mosque in the German town of Wiesbaden.

A number of Salafist preachers from Egypt and Kuwait traveled there to take part in a conference entitled, "Youth in the West: Hopes and fears."

One of the high points from the hour-long YouTube video of the occasion is the conversion of a 26-year-old "German brother," Fabian – it's unclear whether or not he belonged to any faith beforehand. Fabian was apparently moved to convert by a book he'd been given about the prophets. He took the Islamic statement of faith from none other than Muhammad al Zoghby.

The Egyptian religious scholar is one of the most influential Salafist preachers. He travels constantly around the Gulf States and other Arab countries, and he presents his own show on the conservative Saudi religious channel "Al-Khalijia". He also regularly visits the west. On his website he writes about his latest European tour, which took him to Frankfurt and to Barcelona, and he claims to have converted "numerous Christians" along the way. 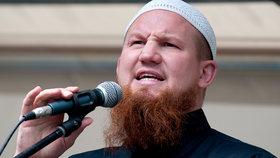 Portrayed by his followers as the Muslim "conqueror of Germany": the German Salafist Pierre Vogel

​​At the conversion ceremony in Wiesbaden, al Zoghby held a 15-minute speech. With dramatic hand gestures and exaggerated language, he spoke in Arabic of famous cases of Muslims who doubted in God but then found their way back to the "true faith". The new converts to Islam, said the charismatic preacher, should take a page from their book, especially given that they are living in a non-Muslim country, where the risk of ensnarement is much greater.

Only the belief in Allah, he says, can give them the strength to overcome the gaps between their origins and their faith. He adds that Muslims living abroad have an obligation to represent Islam in an honorable fashion, so that the religion can grow.

Al Zoghby's appearance is the latest proof that Germany is now high up on the list of priorities for the Salafist movement. Their network of local activists is also growing. The Berlin Imam Hossam El-Gabry also attended the Wiesbaden ceremony. He is often associated with the former Jihadist-filmmaker Reda Seyam, who is one of the active supporters of the Quran distribution program in Germany.

The filming of conversions to Islam is not a new phenomenon. It has become a global strategy for Islamist missionaries over the last few years – not least in response to the numerous conversions of Muslims to Christianity that are readily available to watch on the web.

In Germany, the ritual seems to have been adopted by the former boxer and Islam convert, Pierre Vogel. In Arabic, he is known as Saladin and is portrayed by his followers as the Muslim "conqueror of Germany" (fatih almanya). Where once the big names in the Egyptian Salafist movement seemed hesitant to get involved, now they are eager to appear alongside him – especially for mass conversions, preferably in public places. 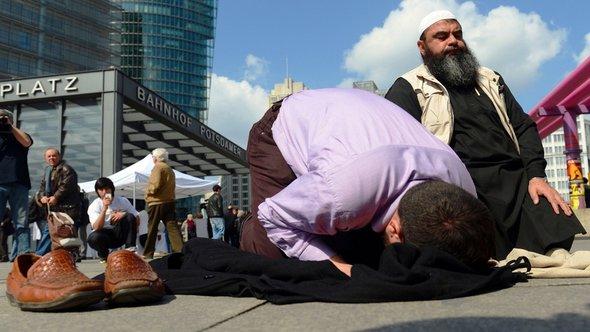 Salafists praying on Berlin's centrally-located Potsdamer Platz: The group had drawn attention by distributing copies of the Quran. On 14 June German police have launched nationwide raids targeting the ultra-conservative Islamists

​​Vogel claims to hold the record for the largest number of conversions to Islam in Germany, when he held a ceremony for 17 German converts in Frankfurt am Main last April. The day's events are now, of course, available to watch online.

It's clear that the aim is to get as much media attention as possible – and Vogel is particularly successful in this regard. Last March, for example, he was filmed giving the Islamic statement of conversion, the Schahada, on his mobile phone in a car on the way to Austria. This practice of phone-conversions has been taken up by another high-profile preacher, Ibrahim al Duwaisch. He began carrying out conversions not in a mosque, but in an Arab-German restaurant in Munich. He claimed that the missionary books handed out in the city had persuaded the converts to join Islam.

Such conversion stunts are becoming increasingly popular – even the moderate Salafist Shashaa employs such tactics. He has posted more than a dozen videos of conversions of Germans to Islam. The aim is that more should follow the path that others have already chosen.

No other Western poet was arguably so well-versed in the Koran or so fascinated by Islam as Germany's national hero, Goethe. In a new publication that examines all Goethe's ... END_OF_DOCUMENT_TOKEN_TO_BE_REPLACED

A deluge of books, movies, series and cover stories: ever since the events of 9/11, the West has seemed almost manically preoccupied with Islam. Yet this has rarely led to deeper ... END_OF_DOCUMENT_TOKEN_TO_BE_REPLACED

Twenty years after 9/11, the world is faced with the dual challenge of Islamophobia and anti-Westernism. Ahmet Kuru argues that Muslims in the West, well versed in both Western ... END_OF_DOCUMENT_TOKEN_TO_BE_REPLACED

Two decades after the attacks of 11 September 2001, the West faces the shattered debris of its failure – not only in Afghanistan, but also in Iraq, Syria, Libya and Yemen. What ... END_OF_DOCUMENT_TOKEN_TO_BE_REPLACED

Twenty years after 9/11, the United States is recalibrating its war policy. However, its assertions that the era of endless wars is over are a myth, writes Maha Hilal END_OF_DOCUMENT_TOKEN_TO_BE_REPLACED

Migrants are often maligned as being responsible for Europe's problems. Yet their integration is in Europe's interest. Michael Thaidigsmann believes that a long-term vision is ... END_OF_DOCUMENT_TOKEN_TO_BE_REPLACED

Comments for this article: Mass Conversions in Public Places

what race is islam?

END_OF_DOCUMENT_TOKEN_TO_BE_REPLACED
Social media
and networks
Subscribe to our
newsletter