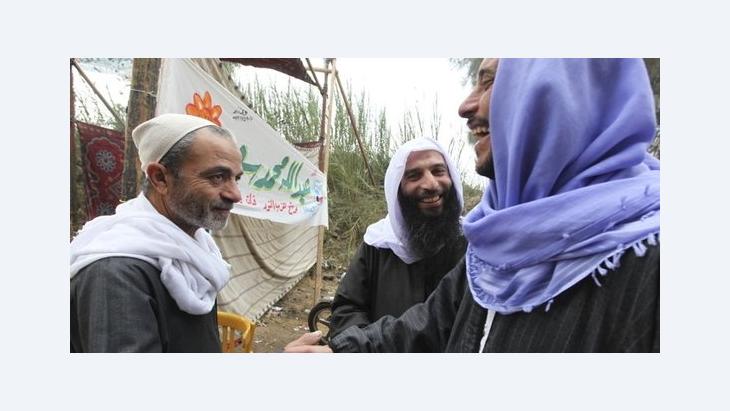 Exploiting the Weakness of the People

﻿The Salafists provided the biggest surprise of the Egyptian elections. They will constitute the second largest party in the new Egyptian parliament. The Salafists are seeking to present an outwardly moderate image, but it is their radical slogans that score points for them with the voters. Karim El-Gawhary reports from Cairo

"An antibiotic can heal many diseases and many people. It's one of the wondrous things God has given mankind." The candidate for the Salafist al-Nour Party inserts a rhetorical pause and allows his words to take effect on the audience in the working-class district of Shubra El-Kheima in the north of Cairo.

Then he leaves them in no doubt as to the panacea he wishes to prescribe for Egypt. His words resound across the square, triply amplified, preacher-style. "The Islamic community will not prosper if the word of God is not implemented as it was in the time of the Prophet and his successors. The Koran is our constitution," he cries.

Three other candidates nod in agreement and twirl their beards, the trademark of the representatives of this radical Islamist party. The scene on the podium at the rally is reminiscent of a dress rehearsal in which the protagonists are trying to re-enact the days of the Prophet. From the bushy beards to the three-quarter-length trousers and galabeyas – their white, shirt-like robes – the radical Islamist representatives aim to bring something of the bygone flair of Mecca and Medina back to contemporary Egypt. 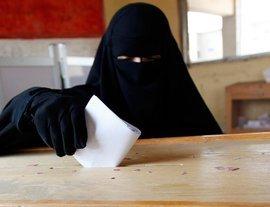 A surprisingly clear election victory for the Islamists: According to its own estimates, the Muslim Brotherhood has gained 46% of the seats in the lower house of the Egyptian parliament, while the radically-orientated al-Nour Party has 23%

​​There are a number of these medieval Oriental folklorists sitting in the audience as well. But most of them are wearing the typical dress of Egypt's poorer districts: worn-out tracksuits and, despite the cool winter evening, plastic flip-flops or, at best, shabby trainers.

It is in precisely these neighbourhoods redolent of hopelessness as well as in the rural regions that the Salafists have done particularly well in the parliamentary elections – the areas inhabited by four out of ten Egyptians who have to get by on slightly more than one euro a day. Across the country the al-Nour Party garnered between a fifth and a quarter of the votes.

"I voted for the al-Nour Party because I'm religious and because I know the candidates from the mosque. They've helped us poor people throughout all the years whenever we had problems, for example when we had to pay hospital bills."

Sameh Zakariya, a metalworker, explains why the Salafists got his vote. "The Liberals never showed their faces here," he adds. Another al-Nour voter simply drew inspiration from the party name, which translates as 'The Light'. "The al-Nour Party illuminates the country and shows us the path to God," he says.

Sameh Seif al-Yazal, a former high-ranking secret service officer who now heads the Al-Jumhuriya Centre for Strategic Studies, had expected the Salafists to do well in the parliamentary elections. But even he was surprised by just how successful they were, particularly because they have only existed as a party for less than half a year.

"They have a great deal of money, they're well organized, and they have efficient personnel," is how he describes the basic conditions for their success. "And they exploit the Egyptians' pious mentality. They said to them: 'You've already tried out every political direction and no one has done anything for you. Why not just try it once with us.'"

In addition, the Salafists have often come to people's aid with concrete assistance. They have provided them with cheap medical care, or sold them meat for less than the market price during Ramadan, the month of fasting. For weeks now Egypt has suffered from a lack of cooking gas cylinders. Long queues formed at the distribution centres. Prices shot up.

"The Salafists procured thousands of gas cylinders and sold them for a fifth of the price. The people were grateful for this help and saw them in a different light. The Salafists exploited weaknesses effectively," explains al-Yazal, pointing out that they have received massive financial support from the Gulf States. 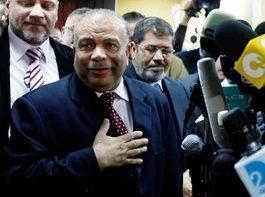 ​​According to press reports, which cite a study by the Justice Ministry, in the last two years the Salafist group Ansar al-Sunna is said to have received almost 37 million euros from the emirates of Qatar and Kuwait. The report describes it as the biggest foreign financial donation to a non-governmental organization in those two years. The Salafists assert that the money was paid out only for charitable purposes. Kuwait has also declared that it did not provide any support for political projects, only for social ones. Yet the example of the gas cylinders shows how blurred the boundaries are between politics and social welfare.

The political leadership of the al-Nour Party gives its interviews in one of the high-rise blocks with a view of the Nile in the genteel neighbourhood of Maadi. Downstairs, outside the lifts, it appears that not everyone in the building is a sympathizer. A handwritten notice affixed to the wall calls on all the occupants to please refrain from party political activities within the building. Eleven floors up, no one seems to be paying this any attention. But the talk up here is quite different from what you hear at rallies in the poorer neighbourhoods.

Up here they've gone into diplomatic soft-pedal mode to make a good impression on outsiders. "We demand an Egyptian legislation that involves the Sharia – Islamic law – and does not contradict the Koran and the Prophetic traditions," is how Bassam Zarqa, a leading member of the al-Nour Party, summarizes its programme.

He qualifies this by adding: "But if a majority in parliament sees things differently, we will defer to them. I can't force my view of things onto the majority of the country. We are not the Taliban," he says. Drinking alcohol must be put on a level with the taking of drugs. But this would only apply to Muslims, he says. And it would be best if women wore a full-face veil – although, of course, he doesn't want to force anyone to do so.

The Salafists are so concerned about their international image that one of their spokesmen, Yusri Jamad, even gave an interview to Israeli Army Radio in which he explained that his party most definitely recognized the peace agreement with Israel, and all the international contracts signed by the old regime.

But on its own television broadcasters and on the home front the Salafists strike a different note. There Abdel Monem al-Shahat, a high-ranking party member, demands that women and men should be segregated when bathing on the beaches, and hotels should be forbidden from serving alcohol, as decreed by Sharia law. And ancient Egyptian Pharaonic statues should be covered up, because they originate from a degenerate culture. Another party spokesman, Nader Bakar, would like to abolish beach tourism altogether, because it leads to "immoral vices".

The Salafists also betray their view of women on their election posters. In place of a photo of their only female candidate, the posters show the party logo, or a white blob. Women should not use pictures of themselves to promote themselves in public.

Emad Eddin Abdel Ghafour, the leader of the al-Nour Party, who is also giving an audience in the Maadi office on the eleventh floor, does not wish to comment on this. It was the women's own decision not to appear on the election posters, he says; and as far as the other things are concerned, these are not the party line but private statements by individual party members. He prefers to speak generally about the relationship between religion and state. 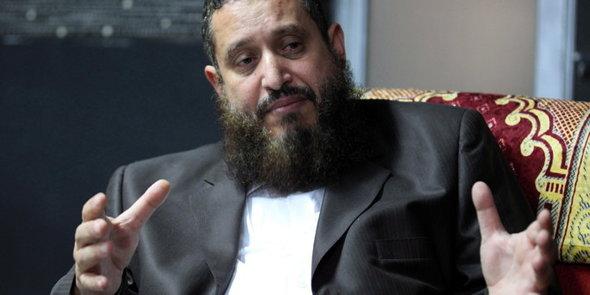 "A state without religion - you can't have that with us. The al-Nour Party went into politics to serve religion." – Emad Eddin Abdel Ghafour, leader of Egypt's Islamist al-Nour Party

​​"A state that is separated from religion is not acceptable. Some say they want a modern, institutional and democratic state: I have no problem with any of that. But a state without religion – you can't have that with us," he states clearly. When asked how he would deal with it if a parliamentary majority were to take a democratic decision that was, in his opinion, un-Islamic, he responds by saying that every democracy needs a system of reference and in Egypt that system is an Islamic one.

Together with the moderate Islamic Muslim Brotherhood and their Freedom and Justice Party, which has won around half the parliamentary seats, the Salafists would be, at least in numerical terms, part of an ideologically Islamist majority. Together the two groups could get any law with a conservative-religious bias through parliament.

"Relations between the Salafists and the Muslim Brotherhood are very bad indeed. There are many differences between them. Because of that, I do not believe that there will be a grand Islamic coalition between the two in the new parliament," explains the strategy expert al-Yazal. The leader of the Salafist party has also already effectively ruled out any such alliance. "I believe that the Muslim Brotherhood will exclude us from possible participation in government and that we will remain in opposition," prophesies Abdel Ghafour.

The Freedom and Justice Party and al-Nour could nonetheless work together on specific issues. As their competitors, the Salafists can at least put pressure on the Muslim Brothers. And one thing is for sure: the Salafists will make themselves noticed in society. In Tunisia, where they are considerably weaker than in Egypt, they have, for example, started a campaign in the universities for single-sex teaching and for the right of female students to wear the full veil.

The Salafists have been propagandizing in Egypt for some time now. Whether it be the 10% of Egyptian Christians, the women who were catapulted into the midst of political events last year, or simply liberal and open-minded Egyptians, the thought of the men in beards constituting a strong political block in parliament – even if only in opposition – is, for many people, a frightening one.

Home
Print
Newsletter
More on this topic
The Role of Religion in Egyptian Society: ''Dictatorship is out in Egypt''Mansoura Ez Eldin on Women's Rights in Egypt: Between Hammer and Anvil
Related Topics
Democracy and civil society, Islam and democracy, Koran | Quran, Muslim Brotherhood, Wahhabism, Salafis | Salafism, Sharia
All Topics

General Abdel Fattah Al-Burhan has declared a state of emergency in Sudan and dissolved the Sovereign Council, which was made up of military personnel and civilians. What will now ... END_OF_DOCUMENT_TOKEN_TO_BE_REPLACED

Sex education – taboo in the Middle East. Or is it? Thanks to social media, millions these days are daring to ask everything about "it". Jennifer Holleis has the details END_OF_DOCUMENT_TOKEN_TO_BE_REPLACED

While Bashar al-Assad is still shunned by the West, which blames him for a decade of brutal war in Syria, a shift is under way in the Middle East, where Arab allies of the United ... END_OF_DOCUMENT_TOKEN_TO_BE_REPLACED

Berlin's annual Human Rights Film Festival closed at the weekend. One entry to the festival was the documentary "Captains of Zaatari". Its Egyptian director Ali El Arabi focuses ... END_OF_DOCUMENT_TOKEN_TO_BE_REPLACED

International relations are shifting across the Middle East as regional powers adapt to America's retrenchment and China's growing influence. Although the region could become the ... END_OF_DOCUMENT_TOKEN_TO_BE_REPLACED
Author:
Karim El-Gawhary
Date:
Mail:
Send via mail

END_OF_DOCUMENT_TOKEN_TO_BE_REPLACED
Social media
and networks
Subscribe to our
newsletter