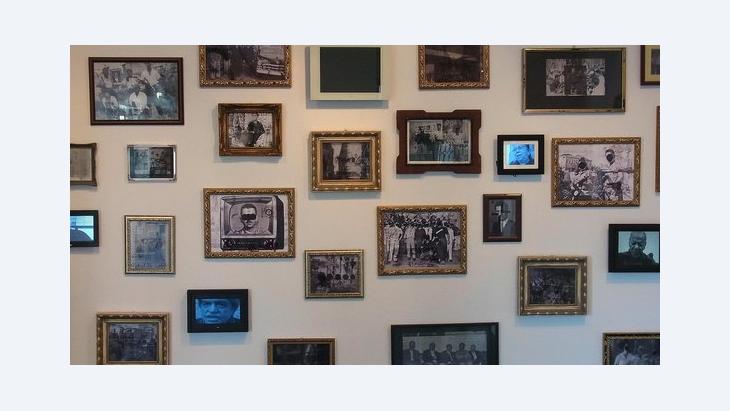 Salah Saouli: The Days of the Blue Bat

A Piece of the Collective Memory Mosaic

﻿The work of German-Lebanese artist Salah Saouli repeatedly draws on strands of recent Lebanese history and examines how these are perceived in the individual and collective consciousness. By Charlotte Bank

The art historian Stefan Rasche has compared the working method of artist Salah Saouli with that of an archaeologist who "obsessively collects photographs, texts and other documents" to then "integrate them as fragmented materials into his multimedia objects and installations which themselves often strain against the limits of legibility".

Saouli's latest project, "The Days of the Blue Bat", currently on show at the Agial Gallery in Beirut, is an exploration of the events of the 1958 Lebanon Crisis and how these have entered the collective memory.

Photos, newspaper clippings, videos and sound recordings are assembled in a large-format installation and a series of montages. Details reveal themselves to the observer only upon close examination, but if the observer accepts the invitation to do this, he will be rewarded by a multi-faceted portrayal of this era.

A mirror on reality

In 1958, Lebanon was plunged into a six-month crisis that exposed tensions within society that would later lead to the outbreak of the 1975 civil war. During the 1958 crisis rival political groupings took up arms; months of political unrest ensued. 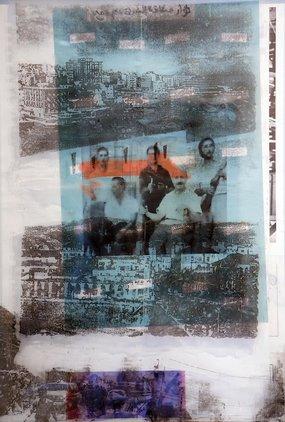 Processing a conflict-ridden past: With his project "The Days of the Blue Bat", Saouli aims to compile an excerpt of shared memory that enables each and every viewer to form his own impression of the historical events of 1958

​​The crisis resonated both regionally and internationally and climaxed with a US intervention that involved the deployment of 14,000 marines to the Beirut coastline.

The artist's own interest in this period was triggered while clearing his parents' house ahead of a planned demolition. It was then that he stumbled upon his father's personal archive, which contained numerous newspapers from 1958.

"What shocked me when I read these articles was how similar they are to reports on today's situation. If you just remove the specific details, the clips could just as easily be current news reports," says Saouli.

Like many members of his generation who experienced the civil war at a young age, the artist only had a vague impression of his nation's conflict-ridden past. So he began looking for other witnesses and evidence to fill in the gaps, resulting in a mosaic of visual and verbal witness statements that grew as time went on.

Salah Saouli derived the name for his project from that of the US intervention "Operation Blue Bat". The name could quite easily serve as a movie title, and it is the artist's intention to make such an allusion. Most of the images from the time of the conflict show young men posing with their weapons. Although their poses appear to emulate those of cinematic action heroes, the young men appear awkward when handling the weapons.

The result is a highly unique iconography of self-representation that testifies to the significance of visual representation in times of armed conflict. The images are intended to make it clear that the armed battle is a game, and the heroes are young and strong. 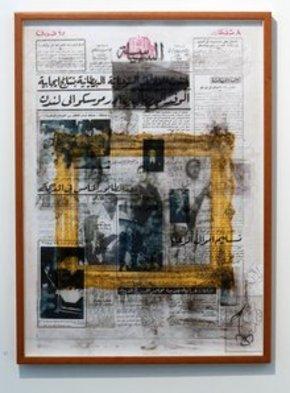 With their superimposition of street shots, portraits, newspaper clippings and areas of colour, the pictures are at times reminiscent of the Dada montages of Raoul Hausmann or Erwin Blumenfeld. And just like these, Saouli's pictures do not yield a uniform image of a reality however it might be defined, but rather they only highlight fragments, writes Bank

​​But this desire to express masculinity and power is jeopardized by the protagonists' lack of persuasiveness. In fact, the overall message is very nearly quite the opposite, appearing almost artificial and disconcerting, even ridiculous.

Although the project refers to concrete, historical events, it should not be understood as a documentation or chronicle of a certain era. "For me this is not about presenting or documenting a particular reading of history. I'm much more concerned with allowing the witnesses and protagonists of this period to talk about what they remember. It's about the collective memory and the verbal transmission of history," explains Saouli.

To this end, alongside the visual material, the artist interviewed and filmed a series of former activists, fighters, political commentators and indirectly involved witnesses. The artist has integrated these interviews into the installation, and the films are shown on small digital monitors set between the framed, small-format picture montages.

The installation feels rather like a private gallery of recollections. The images are mounted in a variety of frames, many of them garish gold, and hung without any decipherable structure – a further nod to the popular-historical character of this project. The pictures are hung just as they would have been originally displayed in private households.

But if the observer takes a closer look, it becomes clear that the work is digging much deeper than the superficially familiar appearance of the installation may suggest. The individual objects have been altered; sometimes faces have been covered and details taken out of context.

An excerpt of shared memory

Saouli is not trying to show how the events of 1958 might be presented in a private context, neither is it his aim to list the groups involved in the conflict. It is much more a case of the artist striving to compile an excerpt of shared memory that enables each and every viewer to form his own impression of this crisis-torn year.

With their superimposition of street shots, portraits, newspaper clippings and areas of colour, the pictures are at times reminiscent of the early 20th century Dada montages of Raoul Hausmann or Erwin Blumenfeld. And just like these, Saouli's pictures do not yield a uniform image of a reality however it might be defined, but rather they only highlight fragments – fragments of a reality that can be unsettling, but which are also ensnared in their own absurdity.

The covered faces could be those of any observer, their individual identity is not important. What is important however is the danger emanating from any kind of violent and military euphoria. Salah Saouli's work does not apportion any blame, but it does issue a warning against creating icons from violence and its glorification. A warning that has not lost its relevance since the events of both 1958 and 1975.

Home
Print
Newsletter
More on this topic
Photography Project ''Missing'': Lebanon's Shadows of the PastContemporary Art in Lebanon: Between Dreams and ViolenceContemparabia 2010 in Beirut: Looking the Ghosts of the Past in the Face
Related Topics
Islamic art
All Topics

Insults directed against Egyptian President Abdul Fattah al-Sisi have been particularly prominent among the hundreds of chants by Arab protestors in Algeria, Sudan, Iraq and ... END_OF_DOCUMENT_TOKEN_TO_BE_REPLACED

Michael Frey has written a fascinating book about the contemporary political thinker Nassif Nassar. Since 1967, Nassar has devoted his life’s work to the question of a fair social ... END_OF_DOCUMENT_TOKEN_TO_BE_REPLACED

Today's in-fighting over the composition of the country's next cabinet is part of a larger battle for a new political settlement. The financial crisis poses a mortal danger to the ... END_OF_DOCUMENT_TOKEN_TO_BE_REPLACED

The upheavals of the past year in the MENA region are arguably as momentous as those of the Arab Spring in 2011. Yet perhaps the biggest difference is that our interest seems to ... END_OF_DOCUMENT_TOKEN_TO_BE_REPLACED

Beirut usually sparkles and dazzles at Christmas time. This year, marked by major protests, however, everything has been turned on its head: there is a distinct lack of Christmas ... END_OF_DOCUMENT_TOKEN_TO_BE_REPLACED

In the heart of Beirut's manicured downtown, something is stirring in a bullet-pocked concrete shell of a building known as "the Egg": the visually unappealing Egg has advanced to ... END_OF_DOCUMENT_TOKEN_TO_BE_REPLACED
Author:
Charlotte Bank
Date:
Mail:
Send via mail

END_OF_DOCUMENT_TOKEN_TO_BE_REPLACED
Social media
and networks
Subscribe to our
newsletter