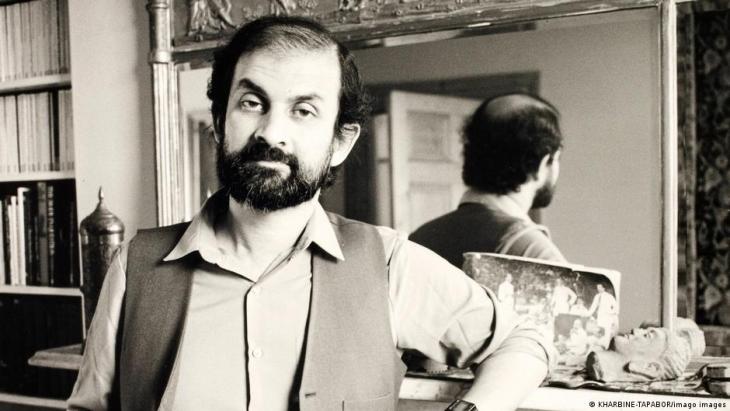 Following the recent brutal attack on Salman Rushdie, famous writers have been reading passages from his works. Torsten Landsberg takes a look at the struggle in 1988 to publish "The Satanic Verses" in German

When Salman Rushdie's fourth novel, "The Satanic Verses", appeared in its English-language first edition on 26 September 1988, the writer could not yet have imagined that this book would fundamentally change his life.

Now, nearly 34 years later, numerous festivals and literary associations have invited people to solidarity readings – not to mark this year's anniversary, but because of the assassination attempt against Rushdie decades after Iranian leader Ayatollah Khomeini issued a fatwa calling for the author's murder in February 1989.

"The Satanic Verses" was first published in Britain, then in the United States, Italy and France. Muslims quickly protested against the novel and its author. South Africa, India and Pakistan stopped the import of the book; people ended up dying during demonstrations. In London, where Rushdie was living at the time, there were also violent protests, arson attacks and threats against bookstores selling the novel.

Rushdie's story is about two Indian actors who survive a plane crash. One becomes an archangel; the other resembles the devil. The title of the novel refers to two verses that are said to have been whispered to the Prophet Muhammad by Satan and therefore erased from the Koran.

In fact, Rushdie's novel is not a critique of Islam, but a narrative about postcolonialism and migration. Rushdie later said that he never wanted to insult Islam. He could have done that in five minutes instead of working on a book for five years, he said.

Almost half a year after the novel's publication, Khomeini issued a fatwa, or Islamic legal opinion, calling on all Muslims to kill the British-Indian writer for alleged blasphemy. Rushdie immediately went into hiding, living in secrecy and under personal protection for nine years. 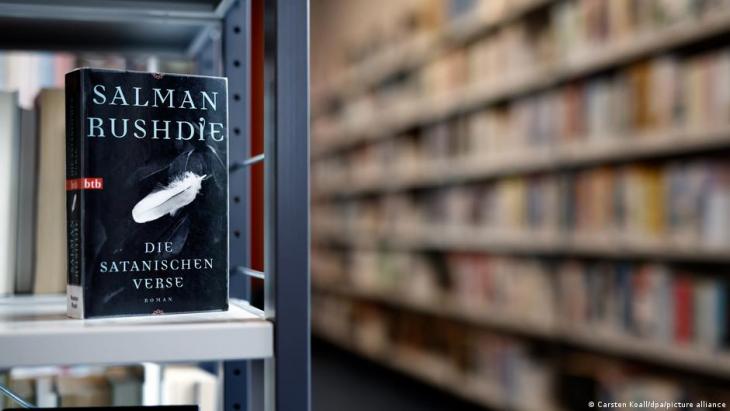 When Salman Rushdie's fourth novel, "The Satanic Verses", was published in the English-language first edition on 26 September 1988, the writer could not yet have imagined that this book would fundamentally change his life. Now, 34 years later, numerous festivals and literary associations are inviting people to solidarity readings – not because of the anniversary, but because of an assassination attempt that hardly anyone expected, more than 30 years after the fatwa was announced by Iranian revolutionary leader Ayatollah Khomeini on 14 February 1989.

Khomeini directed the call to murder not only against Rushdie, but against everyone involved in the publication of the novel. A quarter of a year earlier, Reinhold Neven DuMont, then head of publishing at Kiepenheuer & Witsch, had acquired the book rights for the German-language market. He later describes it as his biggest mistake not to have read the complete manuscript in advance – not because of the impending danger itself, but because he had thus not seen it coming.

"The fatwa led to paralysis in the publishing house," said Helge Malchow, editor at the time and later publishing director. Some of the staff wanted to drop publication, if with a heavy heart, because of the life-threatening situation. "Others wanted to defend artistic freedom and publish the book," he recalled.

The translator who had already been commissioned halted the project and Kiepenheuer & Witsch refrained from the planned publication for the time being. Public criticism of the dithering attitude was gathering steam, but Malchow cautioned that "it was the first Islamist threat of this kind, and it caught us completely unawares".

Arno Widmann, co-founder of Germany's left-wing taz daily, said that he saw things differently. "I thought it was a crime not to publish the book," he said.  German writer Hans Magnus Enzensberger turned to Widmann's friend Frank Berberich, publisher of the culture magazine Lettre International. Enzensberger suggested Berberich print excerpts from Rushdie's book there. But the idea was dropped because of the magazine's quarterly publication cycle.

Berberich suggested printing excerpts in taz. Widmann severely criticised the German publishing industry in several articles at the time. He said Germany was hiding while other countries were standing up for freedom of expression, and that these publishers were not intimidated by the protests. So, when taz went ahead and printed the excerpts, as expected "we received too little attention", Widmann said. 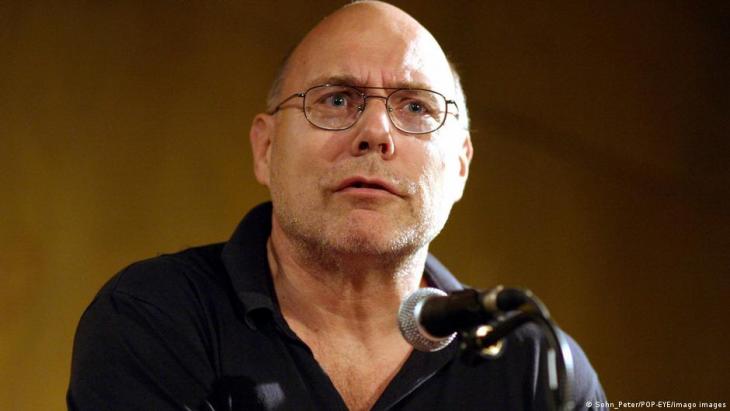 Arno Widmann, then head of culture at the left-wing daily "taz", wanted to publish "Die satanischen Verse" in a concerted effort together with other media. Only the FAZ was initially willing to join in, but in view of the ideological rifts between the two media, FAZ feuilleton head Frank Schirrmacher was unable to push through the decision to print it in-house. Widmann sharply criticised the publishing industry at the time. Germany was hiding, he said, while other countries were standing up for freedom of expression – publishing houses there were not intimidated by the protests

Despite the clamorous criticism of the publishing decision, concerns turned out to be well-founded. In July 1991, the Italian translator Ettore Capriolo survived a knife attack in Milan with serious injuries. A few days later, Hitoshi Igarashi, a Japanese translator and Islamic scholar, was stabbed to death by one or more unknown persons in front of his office at the University of Tsukuba.

After the Turkish writer Aziz Nesin announced that he would publish excerpts from Rushdie's book, Islamists carried out an arson attack on a culture festival in 1993 because Nesin was scheduled to be there. Nesin managed to escape, but 37 people died. That same year in Oslo the book's Norwegian publisher, William Nygaard, was shot three times, an attack he survived.

Decades later, on 12 August 2022, Rushdie himself survived an assassination attempt, though was seriously injured. He was on artificial respiration for a time and will suffer permanent damage.

After years in hiding and under police protection, Rushdie has described living in New York freely and without concern for his life.

Back in 1989, about 100 publishing houses, writers' associations, editors and authors got together to found a new publishing house that would publish "The Satanic Verses" in German. The idea was that no publishing house should be the sole target of possible retaliatory attacks. Kiepenheuer & Witsch was responsible for printing and distribution.

Publishing house for just one book

The Article 19 publishing house, whose name refers to the freedom of expression in the Universal Declaration of Human Rights, served the sole purpose of publishing Rushdie's novel. The collective donated the profits of the sales to the PEN writers' association for the benefit of persecuted authors. 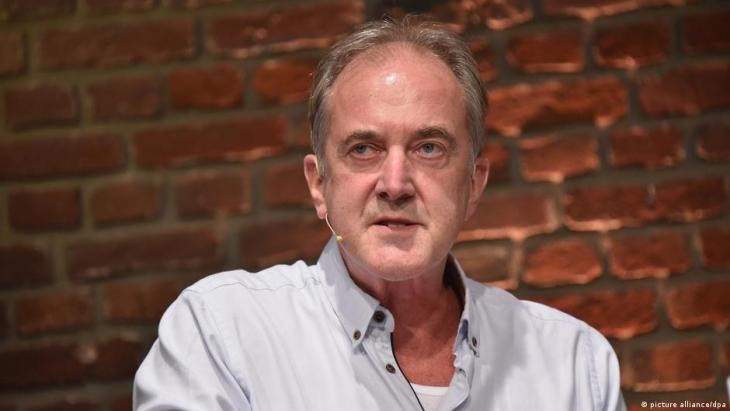 "Thank God, that chalice passed me by," says Bernhard Robben, who has translated some of Rushdie's later works. Asked if "The Satanic Verses" would still be published today, he says: "I'm pretty sure it wouldn't be published"

Rushdie was not happy about the collective solution; he would have preferred his publisher to take an unequivocal stance. "He was downright outraged," Helge Malchow remembered, adding the writer felt the decision was like backing off from the threat. On 17 October 1989, "The Satanic Verses" hit the German-language market. To this day, the person who translated the novel has not been publicly identified.

Bernhard Robben, who later translated several of Rushdie's works into German, said that, as much as he would have liked to translate the book, he struggled with the idea of living "in fear of death". The translator had met Rushdie earlier through a mutual friend, the British writer Ian McEwan. Robben was living in Oxford at the time and he and Rushdie met and got along well. But then Rushdie had to go into hiding.

After the fatwa was announced, Robben finally agreed to translate "The Satanic Verses". He recalls friends were aghast. He told them: "I can't not do it." It was unthinkable to him that this book would not be published in German and that the attack on freedom of expression would succeed.

In the end, the publishing collective decided to have several translators work simultaneously so as not to delay publication. In his 2012 memoir, "Joseph Anton" – his alias under police protection – Rushdie speculates that "The Satanic Verses" would not find a publisher today because the risk of attacks is greater today than back then. Bernhard Robben, who co-translated "Joseph Anton", is indeed "pretty sure it wouldn't be published today."

Antoine Leiris lost his wife in the Islamist terrorist attack on the Bataclan club in Paris. German director Kilian Riedhof has made a film of his book "You will not have my hate ... END_OF_DOCUMENT_TOKEN_TO_BE_REPLACED

Much has changed in the European post-fascist firmament since former SS officers, veterans of the collaborationist Vichy government and other dubious figures established the ... END_OF_DOCUMENT_TOKEN_TO_BE_REPLACED

Welcome to the world of Al Qasar, where Arabic music collides head-on with punk and psychedelic to create something powerful and beautiful. "Who Are We" is a raucous, subversive ... END_OF_DOCUMENT_TOKEN_TO_BE_REPLACED

END_OF_DOCUMENT_TOKEN_TO_BE_REPLACED
Social media
and networks
Subscribe to our
newsletter