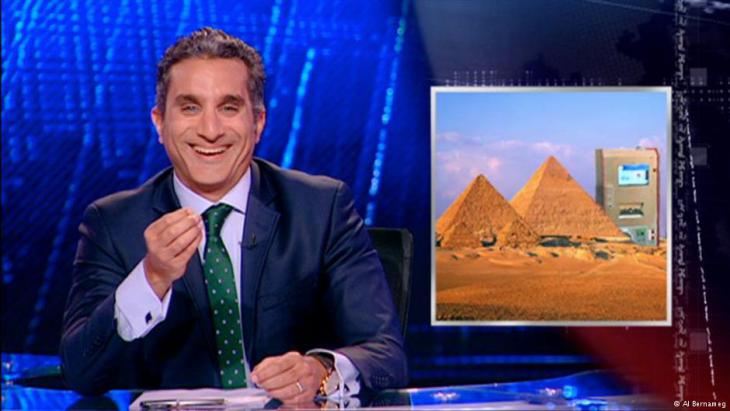 His cutting humour led to Bassem Youssef becoming a comedy star throughout the Arab world in the wake of the Arab Spring in Egypt. Yet, the spring of freedom was short-lived: by the end of 2013, his popular show was abruptly cancelled. An American documentary film portrays the legendary satirist. By Rene Wildangel

The American producer and director Sara Taksler had worked for years with Jon Stewart on the legendary "Daily Show." Its irreverent and broad-minded style served as a model for Bassem Youssef's satirical broadcast "Al Bernameg" (The Programme), which became a huge hit during the Arab Spring in Egypt and throughout the whole of the Arab world.

Following his appearance on Stewart's show in New York, Youssef was even hailed internationally as the "Egyptian Jon Stewart." At this point, Taksler began to film her documentary, which succeeds in delivering both a personal and touching portrait of Youssef. "Tickling Giants" has already been acclaimed at the indie Tribeca Film Festival in the USA. Thanks to the efforts of the Heinrich Boll Foundation in Berlin in co-operation with Cinema for Peace, the film has also been screened in Germany.

The film begins with images of Youssef from the first days of the revolution on Tahrir Square. "I had never seen such protests before. It was unbelievable," admits Youssef. Together with his friend Tarek, he decided to film a small show called B+ on his home laptop. It quickly developed into a smash hit throughout the Arab world. On the first day, the show had some 35,000 viewers; within only two months, the numbers were in their millions.

Youssef quit his job as a heart surgeon and, with his captivating charm and wit, set out to interview the protesters. Youssef was fascinated by the masses on Tahrir Square and joined their ranks. Like all Egyptians, he hoped for a new era – his programme was intended to be part of the newly-won rights to free speech and freedom of the press. He made fun of the rigid kleptocracy that constituted the army and the government, while at the same time exposing attempts by the government media to discredit the protests.

Yet, as he employed his ostensibly sharpest weapon – satire – against Mubarak, the army shot back with live ammunition. He witnessed the murder of demonstrators on Tahrir Square. From the very start, therefore, Youssef was aware of the serious nature of his satirical mission. 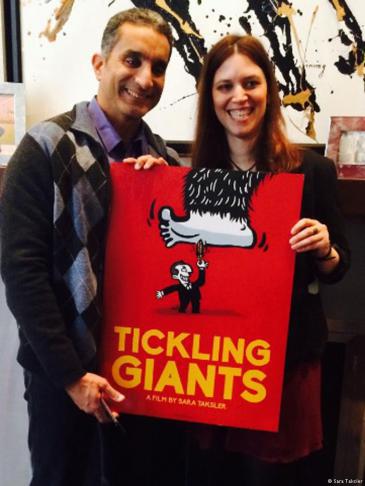 Arabic despots in the hot seat: Youssef still regards satire – a useful yardstick for gauging freedom of expression – as an effective means of countering those in positions of power. His personal situation at the time, however, was becoming increasingly precarious

The same could be said of his team that now produced a television show watched by the vast majority of all Egyptians. The young, creative Egyptian men and women from widely different backgrounds, liberal to conservative, were all intoxicated by the opportunity to finally express themselves freely. A graphic artist from his team designed the image of Youssef tickling a giant under his foot to prevent him from stamping down. Thus the name "Tickling Giants."

Fear of the giants′ return

Not all of those involved were as enthusiastic about the irreverent criticism. They were concerned that the giants could strike back, even after the much-celebrated overthrow of Mubarak. Rule under the Muslim Brotherhood was not exactly what the team producing "Al Bernameg" had hoped for. Nonetheless, the awkwardness of the newly elected President Morsi offered plenty of material to ridicule. The increasingly authoritarian tendencies of the Muslim Brotherhood, however, also narrowed the scope of the show to criticise and Youssef was summoned to court.

In June 2013, the show featured a notable guest. Jon Stuart, revered not only by Youssef, but by his whole team, made a guest appearance on "Al Bernameg" shortly before the military putsch. In an episode well-worth seeing, a masked Stuart is ushered in by two bodyguards as a "spy" – a clear allusion to the conspiracy theories advanced by the government.

In conversation, it became clear how close the two were. Stewart made no secret of his great admiration of Youssef, whose criticism of those in power he regarded as entailing far more risk than Stuart himself ever faced back in America.

Soon, however, Youssef and his show were to encounter even greater problems. After the acclaimed military coup under General Sisi and the subsequent unrest, the regime began an even more sweeping crack down against all opposition and criticism. Although al-Sisi offered similar opportunities for jokes as his predecessor, the wave of terrorist attacks in Egypt and the brutal massacre of members of the opposition Muslim Brotherhood resulting in up to 1000 people being murdered each day presented a situation that could no longer be addressed within the confines of a comedy show. Thousands of people were imprisoned, even the father of one of the show's co-workers. The activities of civil society and critical media were in essence suppressed.

Hymns of praise to the new dictator instead of derision?

Under the eyes of the security forces, increasingly aggressive protests took place in front of Youssef's studio, apparently orchestrated by the government. After the second episode of the new season, the television broadcaster buckled under the pressure: Youssef would only be allowed to continue if he refrained from criticising al-Sisi.

Agreeing to this condition would have been totally inconceivable. What was at stake here, according to Youssef, was keeping a critical eye on the government. Youssef sees satire – a useful yardstick for gauging freedom of expression – as an effective means of countering those in positions of power. Admittedly, however, his personal situation at the time was becoming increasingly precarious.

The attempt to change broadcasters failed and any form of criticism became impossible in al-Sisi's Egypt. At a final press conference in 2014, he announced that the show had been discontinued. It was a sad moment and it appeared that, for the time being, any hopes for a democratic Egypt had been thwarted. Youssef fled to the USA in order to avoid imprisonment. Even when his father died, Youssef could not return out of fears for his safety.

And so, the film's impressive story ends on a depressing note. But Youssef's journey has not yet ended. In early 2016, he began producing his comedy show "Democracy Handbook." In the trailer, Youssef says, "I made a comedy show in Egypt to help get the nation moving in the right direction. The people liked it, but the government not so much. So I came to the land of unlimited opportunity. Now I can learn from the best. After all, America is the greatest democracy on earth. Right?"

In 20 episodes, he travels across a divided country during the election campaign, in which candidate Trump stirs up hatred against Muslims and Islamophobia grows throughout the land. He observes that the USA is following the same trend as in Egypt: "People vote only on the basis of emotions, they vote according to their fears – that′s all." Egypt may have lost Bassem Youssef, but the USA arguably needs him more than ever. 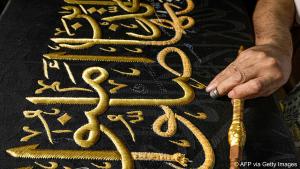 Under the steady hum of a ceiling fan, Ahmed Othman weaves golden threads through black fabric, creating Koranic verses, a century after his grandfather's work adorned the Kaaba ... END_OF_DOCUMENT_TOKEN_TO_BE_REPLACED

Algeria‘s regime is again cracking down on anti-fracking activists and the unemployed in the country‘s south. Yet EU countries remain keen to scale up their energy cooperation ... END_OF_DOCUMENT_TOKEN_TO_BE_REPLACED

The murder of a female student at Mansoura University in the Nile Delta has sparked a long overdue debate on femicide in Egypt. Karim El-Gawhary reports from Cairo END_OF_DOCUMENT_TOKEN_TO_BE_REPLACED

Syria, Egypt, Saudi Arabia and the UAE are among those countries increasingly misusing cybercrime legislation to silence dissent and curb freedom of speech. Could a new global ... END_OF_DOCUMENT_TOKEN_TO_BE_REPLACED

Egypt hopes to jump-start the action needed to face a warming world when it takes the presidency of major UN climate talks in November, but warns that countries need a "reality ... END_OF_DOCUMENT_TOKEN_TO_BE_REPLACED

A ceasefire has been in effect in Libya for the past year and a half. Yet after Russia's attack on Ukraine, another proxy war looms in Africa's most oil-rich country. Mirco ... END_OF_DOCUMENT_TOKEN_TO_BE_REPLACED
Author:
René Wildangel
Date:
Mail:
Send via mail

END_OF_DOCUMENT_TOKEN_TO_BE_REPLACED
Social media
and networks
Subscribe to our
newsletter