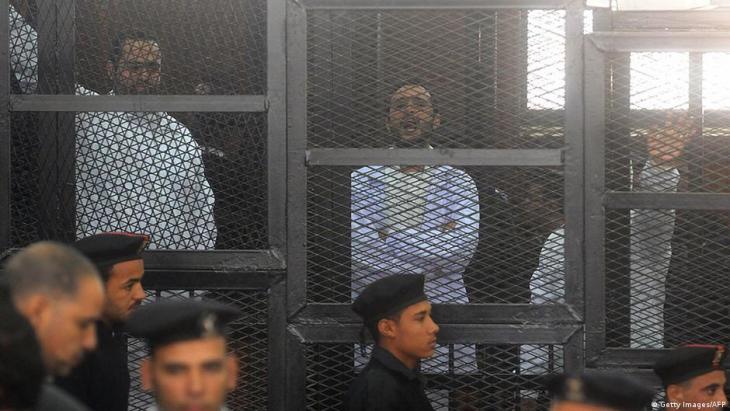 The memory of experienced injustice plays a central role in the transformation of societies towards democracy. In the Arab world, the critical study of memory is only just emerging. The Tunisian philosopher Sarhan Dhouib from the University of Hildesheim has made an important contribution with his anthology, writes Sonja Hegasy in her review

On the night of 4 February 2021, Lebanese intellectual and human rights activist Lokman Slim was murdered in his car with targeted gunshots to the head. Slim published literary testimonies of Arab experiences of violence and had helped compile a private archive of the Lebanese civil war. Like many activists who keep the memory of torture and the arbitrariness of those in power alive, he knew he was putting his life on the line to do so. These days if you suggest a contrary reading of 20th century history anywhere between Morocco and Lebanon, you are likely to find yourself being wiped off the face of the earth.

The contributions to the anthology "Erinnerungen an Unrecht" (lit. 'memories of injustice'), edited by Tunisian philosopher and lecturer at Hildesheim Sarhan Dhouib, revolve around the work and interventions of leading memory archivists of the 20th and 21st centuries in North Africa, the Middle East and Cold War Germany. The first article by Mongi Serbaji deals with the classic "portrait du colonisé précédé du portrait du colonisateur" (1957) by the Tunisian writer Albert Memmi, who died last year at the age of 100.

Serbaji's article provides the perfect segue into debates currently taking place in Germany around (post)-colonialism and guilt. Memmi emphasised in his work that it is the domination over the linguistic faculty (the mother tongue is devalued and degraded in education), akin to the domination over memory, that ultimately dehumanises the colonised. In order to govern, a cultural superstructure such as "the civilising mission" is necessary – in addition to physical violence – to justify the absurd colonial situation (a handful of foreigners without local knowledge exploit many nationals with local knowledge). 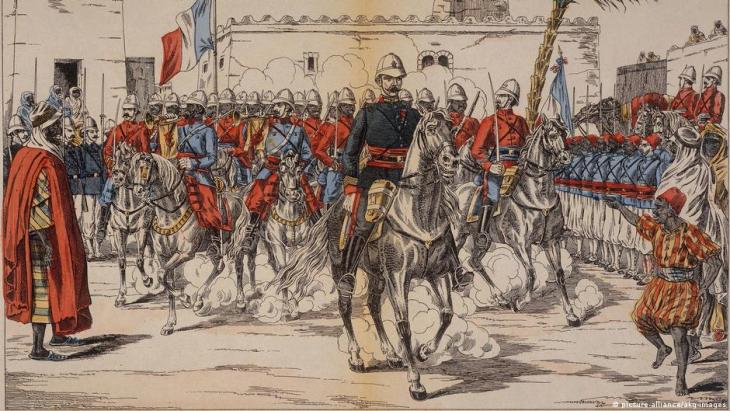 French colonial troops in 1894 in what is now the Malian desert city of Timbuktu: in addition to physical violence, a cultural superstructure such as the "civilising mission" was necessary to govern, in order to justify the absurd colonial situation (a handful of foreigners without local knowledge exploiting many nationals with local knowledge), wrote the Tunisian writer Albert Memmi, who died in 2020, in his 1957 classic "Portrait du colonisé précédé du portrait du colonisateur". It is the domination of language (the mother tongue is devalued and degraded in education) and memory that dehumanises the colonised

Memmi regards such linguistic devaluation as a cultural calamity, capable of inflicting severe damage on the identity of a people. In addition to economic-political exploitation, the cultural and knowledge-related "exile of natives from their own history" (Memmi) is a constituent in maintaining colonial rule. Colonised societies are presented as being devoid of history in order to erase the memory of their own achievements and earlier emancipatory steps.

"The language code and memory policies are policies of dehumanisation," Serbaji writes. At the same time, he criticises Memmi for not answering the obvious question of why, paradoxically, it is precisely the "civilised, democratic peoples committed to modernity" who become the usurpers. And this brings Serbaji to the current debate about the Age of Enlightenment, colonialism and fascism.

Dhouib's anthology deals with the psychological and socio-political debates relating to memory and the past, with literary strategies for remembering and forgetting, and with the significance of testimonies about torture and imprisonment in post-dictatorship phases (see the essay by Tunisian philosopher Soumaya Mestiri). What is striking is that Germanists from North Africa also have their say, as do Germans conducting research into literary testimonies from the Arab-speaking world.

Brahim Moussa, for example, analyses Uwe Johnson's Jahrestage, while cultural journalist Kenza Sefrioui delves into the correspondence of married couples Abdellatif and Jocelyne Laabi, and Christine Daure-Serfaty and Abraham Serfaty. At show trials in the 1970s, Abraham Serfaty and Abdellatif Laabi were sentenced to ten years' imprisonment and life imprisonment, respectively. In her study of their correspondence, Kenza Sefrioui for once examines both sides: from the perspective of both the detainee and the person waiting outside the prison. 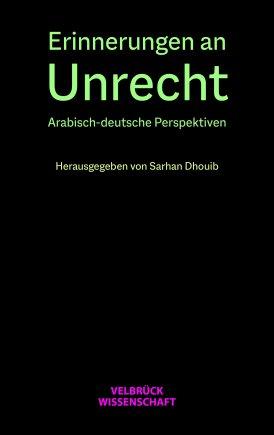 Edited by the Tunisian philosopher Sarhan Dhouib's "Erinnerungen an Unrecht. Arabisch-deutsche Perspektiven" – literally 'Memories of injustice. Arab-German Perspectives' – is the result of three years of interdisciplinary collaboration between German and North African scholars. Memory, especially in societies that want to free themselves from decades of autocratic rule, is central. All the more so when these societies were previously forced to experience the "domination of memory" as a central feature of the European colonisers' abuse of power

What strategies for survival did all four find? How did they cope with their everyday lives? And what have their individual memoirs meant to the public debate on justice and injustice in the years since? The anthology also poses questions like these in other contexts. Martina Schiebel, for example, writes about political imprisonment during the Cold War in East and West Germany.

One of the most exciting developments to come out of the Arab Spring is doubtless the questioning of the grand historical narratives favoured by dictatorships. Moez Maataoui, for example, looks at the phraseology in Tunisia during Ben Ali's rule.

Since 2011, the hollow catchphrases have been broken open, whether through material in private collections, online archives that escape the control of the nation state, independent research inside and outside universities, historical novels or works of art dealing with the fictionality of the past.

After all, the people know that the history the state taught them is fictitious. They know their next-door neighbour did not simply vanish into thin air because he grew tired of his wife.

Testimonies of captivity and resistance have been appearing in the Arab world for 100 years. Who wrote poetry against the French and English in their own country? Who are the people who opposed the gun salvoes from helicopters? Why is the systematic disappearance of political opponents so rarely associated with the Arab world even today? The authors assembled by Sarhan Dhouib close this knowledge gap.

Their volume brings together testimonies of political imprisonment in Egypt, Syria, Tunisia, Morocco, as well as in East and West Germany, thus belying the isolated nature of such experiences. Political assassinations and a network of both official and secret prisons are still part of governance in the Middle East and North Africa. It is a system that intimidates entire populations, as no one can be sure of being spared: neither the graffiti-spraying teenagers in Syria nor an internationally respected star journalist in Morocco.

Islamic scholar Stephan Milich and the German-Syrian sociologist Huda Zein call this system "the total prison" in their article on "Contemporary Syrian Prison Literature". At a conference during the MENA Prison Forum last year, exiled Syrian writer Yassin al-Haj Saleh concluded: "We can't even say the worst is over."

Sonja Hegasy is a researcher at the Leibniz-Zentrum Moderner Orient.

"The people aren’t ready for democracy" has been the constitutional basis for Arab tyranny, its favourite slogan and its sacred narrative for more than a century. Yet, asks Khaled ... END_OF_DOCUMENT_TOKEN_TO_BE_REPLACED

As current events continue to remind us, people all over the world are constantly being forced into exile. "Songs of Exile", created by Algerian Berber exile Abderrahmane Abdelli ... END_OF_DOCUMENT_TOKEN_TO_BE_REPLACED

A new survey by Arab Barometer adds numbers to the narrative that COVID has led to a harsher reality for women in the Middle East and North Africa. By Jennifer Holleis and Razan ... END_OF_DOCUMENT_TOKEN_TO_BE_REPLACED

Algerian scholar Said Djabelkhir rejects the charge of "offending Islam". In interview with Ismail Assam, he maintains that he has been wilfully misconstrued. At the same time, he ... END_OF_DOCUMENT_TOKEN_TO_BE_REPLACED

The Libya Conference will be held in Berlin on 23 June. Much has been achieved since the last Libya Conference in Berlin in January 2020. The ceasefire is holding, there is a ... END_OF_DOCUMENT_TOKEN_TO_BE_REPLACED
Author:
Sonja Hegasy
Date:
Mail:
Send via mail

END_OF_DOCUMENT_TOKEN_TO_BE_REPLACED
Social media
and networks
Subscribe to our
newsletter