Sari Nusseibeh: A Palestinian Looks Back
The Life of "Others"

Sari Nusseibeh's account of his life in Palestine is a story which goes well beyond the history of the Israeli-Palestinian conflict. Andreas Pflitsch says the book is a multi-faceted portrait of its times 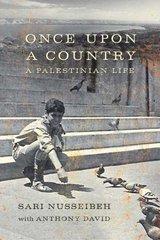 The Israeli-Palestinian conflict, seen through the eyes of someone who lived through it

​​On his return flight to the USA after Yassir Arafat's funeral in Ramallah, Sari Nusseibeh read a book that proved to be "a kind of revelation" for him – Amos Oz's autobiography "A Tale of Love and Darkness." Both men had occasionally encountered each other in the past at peace demonstrations and round table discussions.

The milieu in which Oz grew up in the early 1950s, just after the founding of Israel, was an unknown parallel world for Nusseibeh. It opened his eyes to the mutual ignorance of Israelis and Palestinians. "As there were practically no Arabs in the childhood experiences of Amos Oz, I was prompted to think about how I grew up. What did my parents know of his world?" He asks himself if it is not this "inability to imagine the lives of 'others'" that is, in the final analysis, at the "core of the Israeli-Palestinian conflict." And so he began to write.

The book presents the reader with the political memoirs of a member of one of Jerusalem's most prominent families in the person of Nusseibeh. Born in 1949, the year in which the state of Israel was founded, he was witness to the increasing decline of the influence of the old city elite.

Although his father, who had already served in various Jordanian ministerial posts, was named Governor of the Jerusalem Region by the King of Jordan in 1963 and could thereby continue in his traditional role, the Six Day War of 1967 and the Israeli occupation of the West Bank and East Jerusalem finally put an end to the era of the local establishment.

During the Six Day War, the author attended an elite school in England. In 1968, he began studies at Oxford, after which he spent time in Abu Dhabi and earned a doctorate at Harvard. By the end of the 1970s, he was at Birzeit University, which had been founded in 1972.

​​At this time, the author also began to immerse himself in political activities, first in the labor movement, and then later within the framework of peace talks – initially secret – between Israelis and Palestinians, in which he served as one of the links between the PLO leadership in exile in Tunisia and the population of the West Bank. Today, he is President of the al-Quds University in Jerusalem.

Using his own family background as the setting, Nusseibeh relates the history of Palestine, in particular that of Jerusalem, in the 20th century. His account spans the period from the First World War and the 1936 revolt, via the foundation of the state of Israel in 1948 and the Intifada, up until the present situation, in which both Hamas and the settler movement continue to propel the region into a spiral of violence.

The author intertwines political events, private affairs and the process of social transformation to create a very readable story, which, considering all the details, never comes off as academically aloof. Nusseibeh is quite free in his opinions when describing the (limited) possibilities and (missed) opportunities of Palestinian politics, but he is never ideological and is self-critical without being maudlin.

Jews and Arabs as allies

His relationship to Arafat sways between critical distance and admiring recognition, whereas his criticism of Ariel Sharon, not surprisingly, is unambiguous. Nusseibeh believes that there can only be a common solution, that Jews and Arabs are "allies," and every attempt to separate them leads along a dangerous and mistaken path that is the "product of the modern European myth of a 'pure' nation, unblemished by foreigners."

Nusseibeh's book has something in common with the autobiographies of two other politically committed Palestinian intellectuals, Edward Said's "Out of Place" and Hanan Ashrawi's "This Side of Peace: A Personal Account." A wide point of view and an interest in cultural and social developments link Nusseibeh with the first book, whereas he shares Ashrawi's love of detail in his depiction of the background to the negotiations in Madrid, Oslo, and Washington.

Nusseibeh's "Once Upon a Country: A Palestinian Life" offers a history of the Israeli-Palestinian conflict that extends far beyond a description of his own life, and, in its many-faceted portrait of the times, truly serves as a counterpart to Oz's autobiography.

Both authors equally excel in maintaining a self-critical stance and reflect upon their own entanglement in the ideologies which legitimize the positions of their two societies. The manner in which they have succeeded gives rise to optimism, despite the ongoing situation.

Sari Nusseibeh (with Anthony David), Once Upon a Country: A Palestinian Life.

Book Review Ilan Pappé: "The Ethnic Cleansing of Palestine"
Not Just Collateral Damage
The Israeli historian Ilan Pappé takes a new look at the expulsion of the Palestinians in 1948. According to Pappé, the Palestinians' exodus was not an unfortunate side-effect of the war, but an act of ethnic cleansing planned long in advance. Martina Sabra reports on the book

END_OF_DOCUMENT_TOKEN_TO_BE_REPLACED
Social media
and networks
Subscribe to our
newsletter