A satirical website by and for German Muslims! Seriously? Well, yes and no. The people behind the German satirical news website Noktara are out to make people laugh and dispel a few cliches. To find out more, Dunja Ramadan spoke to Soufian El Khayari and Derya Sami Saydjari

'Follow us or face a stoning'. 'News from tomorrow's Orient – today!' The Twitter slogan and website claim say it all: Soufian El Khayari and Derya Sami Saydjari's news website, Noktara, is all about satire. The two friends are fed up with Islamists hijacking Islam and conservative Muslims whose default setting is deadly serious.

They have no desire to whinge about right-wing populism. Nor are they prepared to simply swallow the standard cliches about Muslims. Instead, they want to 'laugh together for a better world'.

Both men are 30 years old and work together in the field of online marketing. They have a shared hobby: satire. Both subscribe to the news feed from The Postillon, a popular German satirical news website. While driving around one day, they suddenly came up with the idea of setting up their own satirical website.

The idea has now been turned into reality: Noktara has been online (website, Facebook, and Twitter) for three months. They coined the name 'Noktara' from the Arabic word 'Nokta', meaning point or punch line and 'ra', which was added to make it sound better. Both men are Muslims and grew up in Germany.

Your most recent article is entitled 'No entry into paradise without ID', which is a reference to the Berlin Islamist who was killed. The photo at the top of the article bears the caption: 'No ID, no virgins'. How do you approach the tricky issue of Islam and humour?

Soufian: Satire is the best way of dealing with serious problems. The atmosphere in German society was one of the reasons we decided to set up Noktara. Muslims in Germany are not making enough of their own media; there are more reports 'about' Muslims than 'by' Muslims.

Sami: We want to break down walls and make people laugh, even on the subject of Islam and refugees.

How is Noktara different from other satirical websites?

Soufian: We come at things from a different angle. We know the Muslim community in Germany well so we know what might make Muslims here laugh. 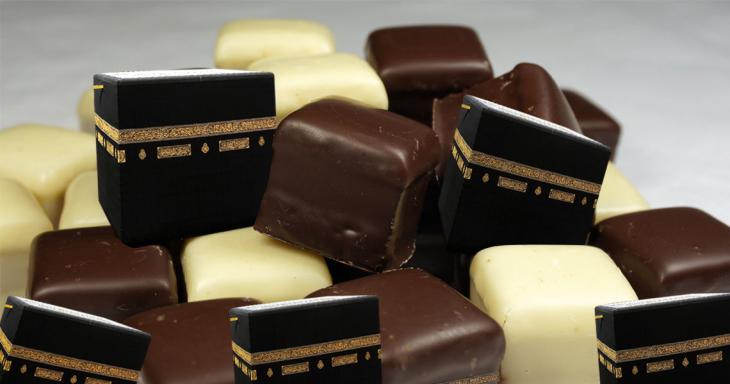 Kabaa cubes a sensation: "We want to encourage conservative Muslims to have a bit more humour" – just one of the aims of Noktara publishers Soufian El Khayari and Derya Sami Saydjari

At the same time, we play with the cliches we ourselves as Muslims face.

This year Amazon told the story of the friendship between a priest and an imam in its Christmas ad. They meet for tea and biscuits and tell each other about their health problems. After the visit, both of them want to give each other a present, which is, of course, delivered by Amazon Prime. Both come up with the same gift idea: knee pads, to help make all the kneeling in the mosque and genuflecting in church a little less painful for their aching joints.

Soufian: When we saw the Amazon Prime ad, for example, two things struck us immediately: instead of giving each other knee pads, we imagined the imam and the priest exchanging gifts of a Koran and a Bible. We called the article 'Mission 2.0'. The other thing was: where was the rabbi? After all, the more colourful the satire market, the better.

We focus on three areas: religion, politics and lifestyle. Our articles are often in direct response to current affairs. Immediately after the attack in Berlin before Christmas, people began complaining about Merkel's refugee policy. In response to that, we tweeted: 'Less speculation, more speculatius' (speculatius is a popular Christmas biscuit in Germany – Ed.).

We also posted the first Islamic advent calendar on our website. Whenever someone clicked on a door, it would open revealing something that is haram (an Arabic term meaning 'sin' or 'forbidden').

What were you trying to achieve?

Soufian: We wanted to encourage conservative Muslims to have a bit more humour. The word 'haram' is sometimes used in a very inflationary way and for so many minor day-to-day things. We wanted to do something about this.

Sami: There are some Muslims who quite simply take things too far. Some of them don't initially realise that what we are doing is pure satire; they accuse us of being unbelievers. So far, however, there haven't been all that many negative messages. We have actually been able to make some conservative Muslims laugh.

Are there any subjects that you just won't touch? 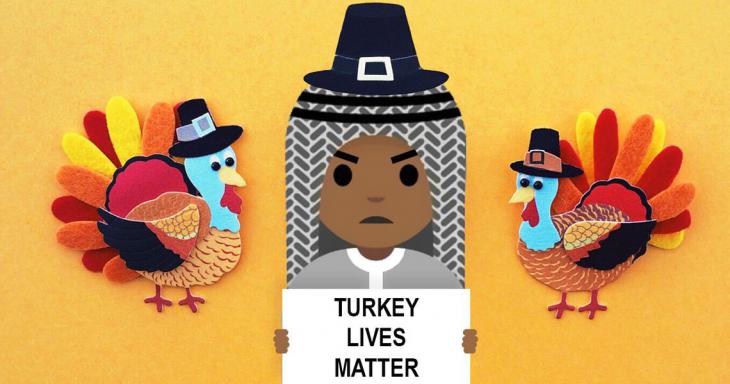 ′Thanksgiving: Muslims protest the mass slaughter of turkeys′: "We also poke fun at apparently double moral standards. I mean, no one talks about the poor turkeys who are slaughtered at Thanksgiving, do they? Yet the Islamic Feast of Sacrifice often comes in for a lot of criticism. That′s why we wrote the article," explains Soufian El Khayari

Soufian: Just because you can do everything doesn't mean that you have to. I, for example, would never say anything blasphemous.

Sami: But apart from that, we don't have any no-go areas. I think that in the case of certain topics, Muslims are more inclined to laugh when the satire comes from a Muslim perspective.

Soufian: There are certain topics that are familiar above all to Muslims and that will, consequently, make them laugh. At the same time, non-Muslims gain an insight into a world that is relatively foreign to them. For example, everyone who has ever been in a mosque is familiar with that moment when an embarrassing ring tone suddenly begins in the middle of prayers. This led us to write an article entitled: 'Scandal in mosque: faithful suspect conspiracy as prayers pass off without ringtone.'

Soufian: We have also been known to poke fun at apparently double moral standards. I mean, no one talks about the poor turkeys who are slaughtered at Thanksgiving, do they? Yet the Islamic Feast of Sacrifice often comes in for a lot of criticism. This is why we wrote an article entitled: 'Thanksgiving: Muslims protest mass turkey slaughter.'

What has been your most popular satirical article so far?

Soufian: The one about chocolate manufacturer Lindt bringing out 'domino tiles' (a popular Christmas sweet in Germany – Ed.) for Muslims was read a lot. For our photo, we changed the appearance of the 'domino tiles' a little by decorating them with a golden band and calling them Kaaba cubes instead.

Sami: Christmas is, of course, a gift for satirists, but there are other events. We are already looking forward to Ramadan, the Muslim month of fasting.

Any hints as to what you have in store for your readers?

Sami: Every year, Muslims around the world wonder when Ramadan will begin. Because the Islamic calendar is a lunar calendar, Ramadan does not begin on the same day every year. The Saudis in particular often want to go their own way. So we have prepared a few articles on what is usually a heated debate about the moon sighting.

What do you hope to achieve with Noktara?

Soufian: For me, it's important that we as a team have fun and enjoy working on the project. We want to make people laugh and dispel cliches.

Sami: We want to write about things that make all kinds of people laugh. There is a need for much more satire about the subjects refugees, Islam, and terrorism.

Home
Print
Newsletter
More on this topic
Website "Noktara - Nachrichten aus dem Morgenland, schon heute!"Fighting Islamic State with satire and black humour:Terribly funny Interview with Firas Alshater: ″Being a refugee is not my dream job″Islamic satirical magazine "Cafcaf" from Istanbul: "No, nothing has been forgiven!"
Related Topics
Cartoons, Integration in Germany, Islamic lifestyle, Media dialogue, Media in Germany, Muslims in the West, Refugees, Satire
All Topics

Business in the Moroccan city of Tangiers is booming due to its location at the nexus of global trade routes. But many locals are failing to reap the benefits. What they crave ... END_OF_DOCUMENT_TOKEN_TO_BE_REPLACED

Morocco and the European Union are at cross purposes when it comes to the Western Sahara. And, as Germany does not support Moroccan claims to the territory, a major conflict has ... END_OF_DOCUMENT_TOKEN_TO_BE_REPLACED

Jewish voices are much more diverse than the public often sees. Jewish men and women who oppose the injustice of Israeli occupation in the West Bank deserve our respect and ... END_OF_DOCUMENT_TOKEN_TO_BE_REPLACED

They’ve already got the Louvre; they’ll soon have a Guggenheim Museum as well – and now the Emirates have added literature to their quest for cultural supremacy in the Arab world ... END_OF_DOCUMENT_TOKEN_TO_BE_REPLACED

The Germans have a fragmented perception of the conflict between Israel and the Palestinians, and their discourse is dominated by certain catchphrases. All the while, there is a ... END_OF_DOCUMENT_TOKEN_TO_BE_REPLACED

An unusual organisation brings Jews and Muslims together to fight hate and promote dialogue. In the small central German city of Marburg they have been jointly calling for an end ... END_OF_DOCUMENT_TOKEN_TO_BE_REPLACED
Author:
Dunja Ramadan
Date:
Mail:
Send via mail

END_OF_DOCUMENT_TOKEN_TO_BE_REPLACED
Social media
and networks
Subscribe to our
newsletter