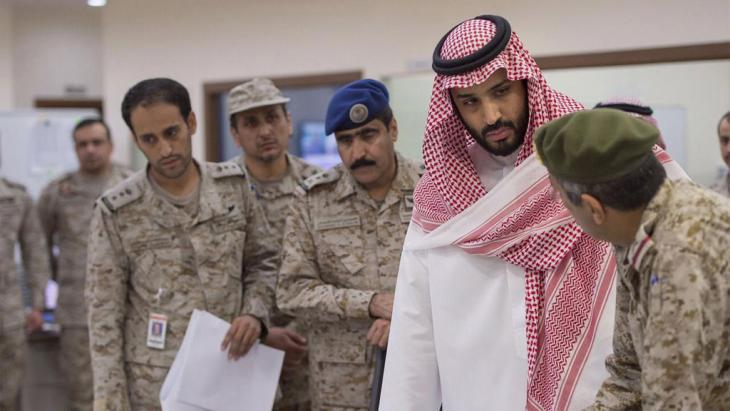 Saudi Arabia and the conflict in Yemen

Saudi Arabia bears the greatest responsibility for the triumphant advance of the Houthi militia in Yemen, says Birgit Svensson: the leading Sunni power in the Gulf simply stood by while a Shia counterbalance emerged virtually on its doorstep, thereby creating an opportunity for Tehran

Egyptian President Abdul Fattah al-Sisi proudly announced the establishment of a joint army at the Arab League summit in Sharm el-Sheikh at the end of March. The aim is to effectively counter the growing threats in the region.

What was meant here, first and foremost, is the precarious situation in Yemen. For days now, the Saudi air force has been conducting bombing raids on Houthi rebels in the capital city, Sanaa, and in the north of the country. A contingent of 150,000 ground troops is standing ready. Egypt will also enter the war, promised the former field marshal, who exchanged his uniform for a suit last June when he became president of Egypt.

Seeing as other countries in the Arab League, which comprises 22 members, would similarly like to take part in the military action, why not establish a joint Arab army? Many at the summit were reminded of the era of Gamal Abdel Nasser, who tirelessly attempted to unite all Arabs and promoted the development of Arab nationalism. Many, however, doubt that Sisi will succeed where Nasser failed. Yemen will be the litmus test. 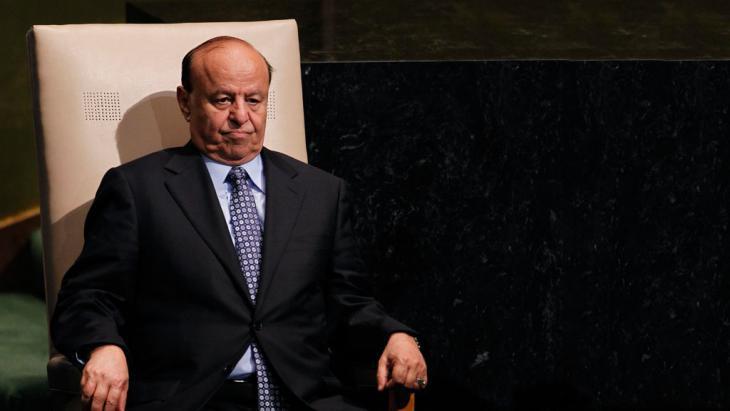 Backs to the wall: Saudi Arabia's Sunni royal family supports the exiled Yemeni President Abd-Rabbu Mansour Hadi (pictured here) and accuses Iran and Hadi's predecessor, Ali Abdullah Saleh, of supporting the Shia rebels. Hadi has referred to the rebels as "Iran's henchmen" and said that the airstrikes must continue "until the Houthi gang surrenders"

Once again, apparently, no one saw recent events coming. If one believes the international reaction to developments on the southern tip of the Arabian Peninsula, the country was suddenly overrun by rebels. First, the Houthi rebels took control of the capital Sanaa, followed by Taiz, the third largest city in the country. Now they have reached Aden. It is almost as if the followers of the rebel chief appeared out of the blue to overwhelm this mountainous country. Is Abdel Malik al-Houthi now the new caliph of Yemen? The Yemini equivalent of Abu Bakr al-Bagdadi?

Superficially, there are a number of parallels to Iraq. There, the terrorist organisation IS took advantage of the situation when the many ethnic groups in Iraq were at odds with the central government in Baghdad and former Prime Minister Nouri al-Maliki. Radical forces, in particular al-Bagdadi and his supporters, stepped in to fill the power vacuum. Their goal, which they quickly accomplished, was to establish an Islamic state.

The territories taken and since fortified can only be won back with great difficulty. The situation in Yemen is similar. As the government in Sanaa became weaker, the rebels grew in strength. There was no stopping them once the president fled to the south of the country. Abd-Rabbu Mansour Hadi has since left the country altogether – first fleeing to Saudi Arabia and then to Egypt.

But that is where the similarities with Iraq end. While the "Islamic State" combatants in Iraq are Sunnis, the Houthis belong to the Shia branch of Islam. In contrast to IS, which is made up of a number of various groups, the Houthis are an established part of Yemeni society. Their movement was established in 2004 to represent the interests of the Zaidis, a Shia religious denomination widely followed in the north of Yemen. 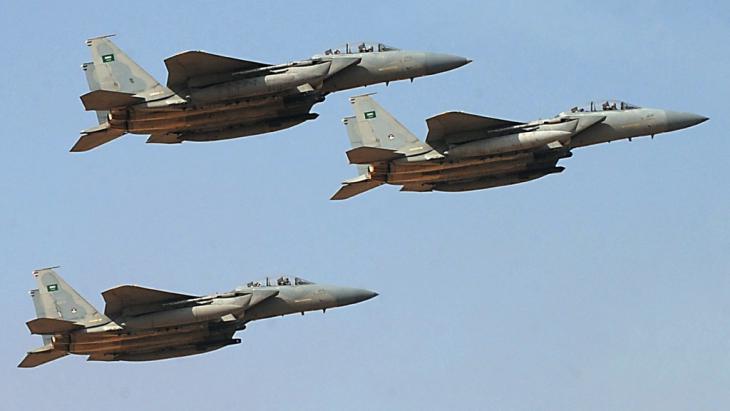 Airstrikes against Houthi rebels: the Saudi-led military coalition is continuing its airstrikes against Houthi positions. According to reports on the ground, Sanaa as well as targets east of the capital and in the west of the country have been hit. Saudi Arabia and a number of other Arab states began the offensive last Thursday. The Shia Houthi rebels gained control over Sanaa in September and have since moved further south

The Houthis began their march to victory at the start of the Arab Spring in 2011, which also saw a popular uprising against the existing regime in Yemen. They demanded more land and more power, the reintroduction of subsidies for fuel and electricity, and lower food prices for the average Yemini citizen.

Step by step, they extended their sphere of influence from the north towards the south, retreating when necessary, but always pressing forward again whenever the political situation grew more instable and the powers that be in Sanaa began bickering amongst themselves. According to Ulrich Wolf, the deputy chair of the Middle East Forum in Berlin, who lived in Yemen for many years and still has good contacts in the country, the Houthis were by now an independent force.

Developments since the start of the so-called "national dialogue", which began exactly two years ago, show just how far the situation has deteriorated and spun out of control. The Gulf Cooperation Council, under the leadership of Saudi Arabia, and representatives of the United States intended the dialogue to be a key element of the transformation process. The autocratic President Ali Abdullah Saleh was removed from power and replaced by Hadi following a referendum. The "national dialogue" was intended to bring all the political and social forces to the table to hammer out a new constitution and prepare for parliamentary elections that would truly deserve to be called elections.

"It is a good day for Yemen," said German Foreign Minister Frank-Walter Steinmeier a year later, commenting on the country's situation, which even then was viewed with suspicion by observers. "In truly difficult circumstances and after numerous setbacks, the 'national dialogue' has today been brought to a successful conclusion." But this conclusion was anything but successful. Since 2003, there have been no parliamentary elections in Yemen, and there have been no moves towards a new constitution. Although Germany became Yemen's largest donor, it has played no political role in the country. Instead, Riyadh and Washington held sway over this part of the world. 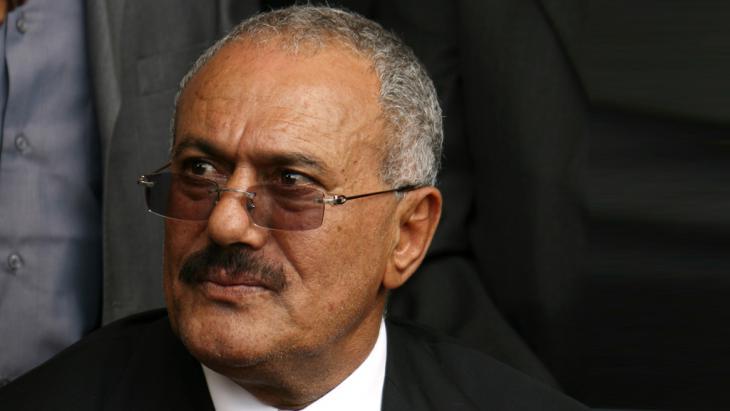 Yemen's former president returns to the political stage: the Houthi rebels have allied themselves with supporters of former President Ali Abdullah Saleh (pictured here) and have since taken over a large part of the country, including the capital Sanaa. Saleh stepped down in 2012 after a popular uprising. He refused to go into exile, however, and remained the leader of his General People's Congress party. He still retains considerable influence in the military

For the Americans, the Houthis were not the problem, but rather al-Qaida in the Arabian Peninsula (AQAP). The fight against this group was Washington's top priority. The group is regarded as the most radical wing of the terrorist organisation and it has carried out attacks worldwide. The most recent example is the massacre of the editorial staff of the French satirical magazine "Charlie Hebdo", for which the AQAP claimed responsibility.

The countless US drone attacks were always followed by reports of the killing of members of al-Qaida. But for all these attacks, they did not succeed in defeating the terrorists. On the contrary, information from Yemen indicates that for every al-Qaida terrorist killed, two new ones were recruited. Anti-American sentiment among the Yemeni population only grew with every new drone attack. The Houthis are open in their criticism of the US. Washington has since halted its drone strategy.

True responsibility for the political catastrophe in Yemen, however, lies with Saudi Arabia. The leading Sunni power in the Gulf merely stood by while a Shia counterbalance emerged virtually on its doorstep, thereby creating an opportunity for Tehran. Similarly, Riyadh looked on as former dictator Saleh, who stepped down under Saudi pressure in 2012 to make way for Hadi, proceeded to ally himself with the Houthis in the hope of returning to power.

Now, the Saudis can think of no better solution than to send 150,000 soldiers and heavy artillery to the poorest country on the peninsula in order to stop the "Shia advance", as it is officially termed. The strategy will certainly not win the hearts of the 24 million Yemenis. It is more likely that the crisis will develop into another proxy war between Iran and Saudi Arabia, as is already the case in Syria and Iraq.

Birgit Svensson
© Qantara.de 2015
Translated from the German by John Bergeron

No other Western poet was arguably so well-versed in the Koran or so fascinated by Islam as Germany's national hero, Goethe. In a new publication that examines all Goethe's ... END_OF_DOCUMENT_TOKEN_TO_BE_REPLACED

A deluge of books, movies, series and cover stories: ever since the events of 9/11, the West has seemed almost manically preoccupied with Islam. Yet this has rarely led to deeper ... END_OF_DOCUMENT_TOKEN_TO_BE_REPLACED

Two decades after the attacks of 11 September 2001, the West faces the shattered debris of its failure – not only in Afghanistan, but also in Iraq, Syria, Libya and Yemen. What ... END_OF_DOCUMENT_TOKEN_TO_BE_REPLACED

Following the Taliban's power grab, members of the Hazara minority fear they will be targeted. Those who can, escape. Others have joined the armed opposition. But for many, there ... END_OF_DOCUMENT_TOKEN_TO_BE_REPLACED

One thing the regime in Tehran has in common with the Taliban is that they both dislike the USA. But apart from that, Tehran has a number of issues with its neighbour, writes ... END_OF_DOCUMENT_TOKEN_TO_BE_REPLACED

Although the United States clearly could have done a better job of managing its departure from Afghanistan, the tragedy playing out this month has been 20 years in the making. ... END_OF_DOCUMENT_TOKEN_TO_BE_REPLACED
Author:
Birgit Svensson
Date:
Mail:
Send via mail

END_OF_DOCUMENT_TOKEN_TO_BE_REPLACED
Social media
and networks
Subscribe to our
newsletter