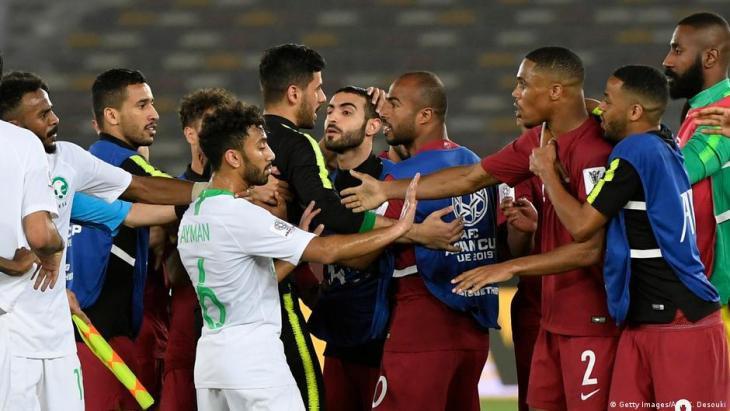 Saudi Arabia, football and the Olympics
Making the leap from off-side to big league?

The Saudi national team is set to play the German Olympic squad at the Olympics in Tokyo later this month – a chance for the outsiders to make their mark. At the same time, and keen to buff up the nation's badly tarnished image, the Kingdom is looking to pitch for glory in the multi-million dollar football business. It's a risky strategy. By Sebastian Sons

When the "green falcons" – the Saudi Arabian football team – play against the German team in the group stages of the Olympic soccer tournament on 25 July, it’ll be more than just a game for the Kingdom. The squad of "heroes", made up solely of players from the domestic Saudi Professional League, is viewed by many as a promise for the future.

This puts additional pressure on the team; bearing in mind that the Saudis haven’t played in the Olympics since 1996. On that occasion, the adventure in Atlanta ended with three defeats. So this year’s Games are an opportunity to prove to the world that the Kingdom can compete with the best – not just on the pitch, but off it too.

For a long time, football led a shadowy existence in Saudi sports policy-making. But recent years have seen a shift: for the powerful Crown Prince Muhammad bin Salman (MbS), football is not just a sport, but an instrument with which to consolidate Saudi Arabian influence on the international stage. Sport serves him as a key pillar of Saudi "nation branding". By staging events such as boxing matches between heavyweight superstars Anthony Fury and Tyson Fury or the Dakar Rally, the nation has begun to make its mark in the sports business.

For the first time ever, a Formula One race is taking place in Saudi Arabia this autumn.  It is thought that Saudi Arabia has invested more than 1.5 billion U.S. dollars in "sports-washing" events such as these. It’s an opportunity for MbS to freshen up the Kingdom’s image, which has taken a bashing in recent years for its poor human rights record, the war in Yemen and the murder of Saudi journalist Jamal Khashoggi in October 2018. MbS is himself accused of involvement in the reporter’s death.

In competition with the Emirates and Qatar

With this approach, the Crown Prince is following the example of neighbouring states Qatar and the United Arab Emirates (UAE), which anchored sport within their business models many years ago. This strategy’s greatest success story is of course the staging of the 2022 World Cup by Qatar in the coming year, as well as investment in European football club heavyweights such as Paris St. Germain (PSG) or FC Barcelona. 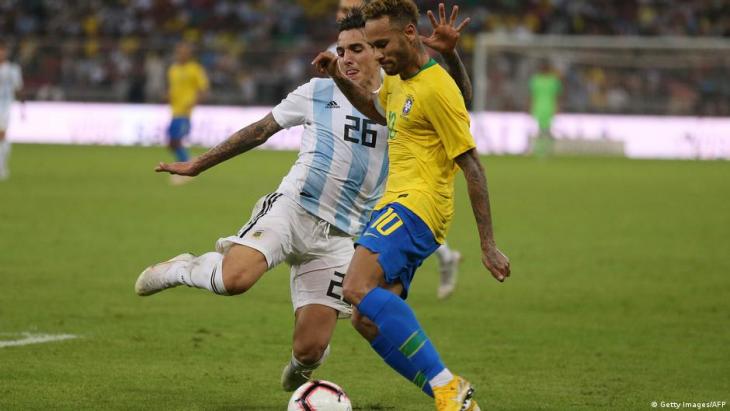 Brazilian striker Neymar (right) of Paris St. Germain (PSG) football club during a friendly match in Saudi Arabia: when PSG bought the superstar in June 2017, it was the most expensive transfer in soccer history to date. Neymar was acquired for 222 million euros – with cash from the Qatari sovereign wealth fund. For both Qatar and the United Arab Emirates, sport has been "anchored within their business model for many years," writes Sebastian Sons. Saudi Arabia wants to follow suit and sees the two Gulf heavyweights as its main competitors

In June 2017, PSG carried off the most expensive transfer in football history, buying the Brazilian superstar Neymar for 222 million euros – with cash from the Qatari sovereign wealth fund. Qatar Airways doesn’t just sponsor Bayern Munich, but also the UEFA tournament. Most recently, there were rumours that Qatar Airways could strike some sort of deal with the German Football Association (DFB), rumours that sparked a wave of public criticism in Germany and that were directly denied by Qatar.

It’s a similar picture in the UAE: the country‘s billion-dollar investments in the top English team Manchester City have made the squad from northwest England one of the richest clubs in the world. As a result, the Champions’ League semi-final between PSG and City was also described as an "emirs’ showdown".

Muhammad bin Salman also dreams of such successes: the Crown Prince needs to give Saudi Arabia a radical economic overhaul and reduce its dependence on oil. In an era of falling oil prices and the outbreak of the coronavirus pandemic, the Kingdom is struggling more than ever before to deal with a high unemployment rate and rising inflation.

Saudi strategy of "bread and circuses"

It is hoped that the unifying power of football will provide a distraction in such times of crisis, as part of the Saudi “bread and circuses” strategy. MbS aims to create a nationalistic sense of belonging and consolidate his own position as future king.

Furthermore, football has become a projection screen for regional rivalries: the Crown Prince aims to develop the long-isolated and deeply-conservative Kingdom into a new regional trading hub, thereby challenging the status of Qatar and the UAE – also and especially in the sport business. For example, the "Gulf crisis" between Saudi Arabia, the UAE, Bahrain and Egypt on the one side and Qatar on the other from 2017 to January 2021 was not just a struggle for ideological and economic hegemony on the Gulf, but also for sporting supremacy.

Saudi Arabia and the UAE envied Qatar’s hosting of the Word Cup, while with the Neymar transfer, Qatar demonstrated how it was not about to buckle under the pressure of the "blockade quartet". And when even Morocco didn’t decisively side with Saudi Arabia at the outset of the crisis, there were very real and sensational consequences: Together with other allied Arab states, Saudi Arabia withdrew its support for Morocco’s bid to stage the 2026 World Cup. Instead, Saudi Arabia voted for fellow applicants the U.S., Mexico and Canada – bids that were later accepted. 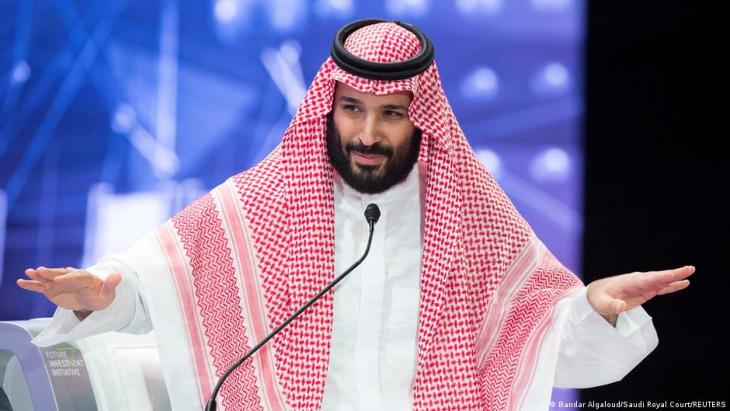 For the powerful Crown Prince Muhammad bin Salman, football is not just a sport, but an instrument with which to cement Saudi Arabian influence on the international stage. Sport serves him as a key pillar of Saudi "nation branding". The Kingdom is struggling more than ever before to deal with a high unemployment rate and rising inflation. As part of the Saudi “bread and circuses” strategy, it is hoped that the unifying power of football will provide a distraction in such times of crisis. MbS aims to create a nationalistic sense of belonging and consolidate his own position as future king

Thus far, Saudi Arabia has not succeeded in positioning itself as a dominant player on the international football stage. For example, plans by the Saudi investment fund led by the Crown Prince to take over the English club Newcastle United were rejected by the Premier League – despite the Crown Prince asking British Prime Minister Boris Johnson  to intervene. The murder of Khashoggi was one of the reasons for the refusal. Another problem was the legal dispute between Saudi Arabia and Qatar over the TV broadcasting rights of key sporting events: In 2017, Saudi Arabia began blocking signals from Qatari sports broadcaster BeIN during important soccer tournaments such as the World Cup.

A relentless power struggle ensued: Saudi Arabia founded a pirate station with the telling name beOutQ (the "Q" stood for "Qatar"), which made illegal use of material from BeIN to give Saudi viewers access to coverage of the matches despite the Qatari blockade. At the same time, animated clips defaming Qatar were aired during the half-time breaks, so that beOutQ became a propaganda instrument of Saudi anti-Qatar policy. In 2018, Qatar responded by filing a complaint with the World Trade Organisation, which condemned the actions of the Saudis.

Despite beginning an investment in the fair-to-middling Spanish club UD Almería in August 2019, the Saudi businessman and MbS confidante Turki al-Sheikh couldn’t instigate a serious attack on the big-hitting squads bankrolled by the UAE and Qatar; in fact so far under his aegis, Almería has turned out to be something of a laughing stock – with five coaches hired and fired within a year and no glittering sporting success to show for it.

But Saudi Arabia continues to pursue ambitious plans: for example, the Kingdom allegedly aims to invest 355 million euros in the top Italian club Inter Milan. But the biggest coup certainly has to be plans to host the 2030 World Cup – perhaps together with Italy. This would be a sensation, one that would bring Saudi Arabia very close to its goal to establish itself as the Arab heart of sport and outdo its regional rivals.

But this path remains rocky a one, as Qatar is also discovering: its staging of the World Cup has led to massive public criticism of the exploitation of Asian and African labour migrants; its involvement in Bayern Munich has also been heavily criticised by both fans and policymakers. Saudi Arabia will continue to be the subject of intense scrutiny – even if the Saudi team manages to beat Germany in the Olympics.

Algeria‘s regime is again cracking down on anti-fracking activists and the unemployed in the country‘s south. Yet EU countries remain keen to scale up their energy cooperation ... END_OF_DOCUMENT_TOKEN_TO_BE_REPLACED

Bachtyar Ali sends the hero of his latest novel – "Mein Onkel den der Wind mitnahm" – literally flying. Jamshid is so thin after his years as a political prisoner that a gust of ... END_OF_DOCUMENT_TOKEN_TO_BE_REPLACED

For a century, the Kurds and other minorities in Turkey have been subject to state repression. With his dissertation "The Kurdish Question in Turkey", political analyst Ismail ... END_OF_DOCUMENT_TOKEN_TO_BE_REPLACED

Anti-Semitic motifs have no place at Germany’s documenta art show or anywhere else in the world, stresses Meron Mendel, director of the Anne Frank Educational Centre in Frankfurt ... END_OF_DOCUMENT_TOKEN_TO_BE_REPLACED

A new exhibition, "Syria – Against Forgetting", at Cologne’s Rautenstrauch-Joest-Museum focuses on Syria's artistic and cultural heritage and pays tribute to the country before ... END_OF_DOCUMENT_TOKEN_TO_BE_REPLACED

Madrid's about-face on the Western Sahara conflict has enraged Algeria. Trade relations have been frozen unilaterally and a cut in gas supplies to Europe could be in the pipeline ... END_OF_DOCUMENT_TOKEN_TO_BE_REPLACED
Author:
Sebastian Sons
Date:
Mail:
Send via mail

END_OF_DOCUMENT_TOKEN_TO_BE_REPLACED
Social media
and networks
Subscribe to our
newsletter