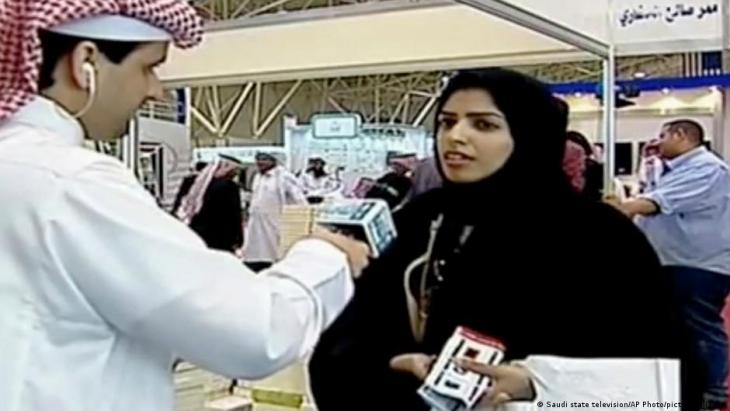 Saudi Arabia
When a tweet gets you 34 years in prison

The ruling is part of an ongoing clampdown on dissent and minorities in the kingdom. But so far, it's unlikely to have an effect on the kingdom's newly polished image as a global oil provider in times of crisis. Jennifer Holleis reports

Shortly after Saudi Arabia returned into the global fold after four years of being widely shunned following the murder of Saudi journalist and critic Jamal Khashoggi, a new verdict yet again puts the Middle Eastern kingdom in the spotlight, this time for cracking down on a female PhD student who supports human rights groups.

The PhD student, who was enrolled at the University of Leeds in the UK, was detained during a visit to her home country in December 2020. She has now been found guilty of "assisting those who seek to cause public unrest and destabilise civil and national security by following their Twitter accounts”, according to the court papers, which were obtained and translated into English by UK daily The Guardian. In a tweet, the University of Leeds expressed its "deep concern".

For the mother of two young boys, the verdict came as a shock since she had appealed a much shorter six-year sentence for "causing public unrest and destabilising civil and national security on an Internet website".

Harsh even by Saudi standards

Al-Shehab was neither particularly outspoken in her criticism, nor did she reach a wide audience. During her two years abroad, she had shared and liked social media posts that called for the release of the then-detained human rights activist Loujain al-Hathloul and had supported calls for gender equality in Saudi Arabia. And yet, according to the U.S. newspaper The Washington Post, a Saudi Twitter user called Faisal OTB informed her on Twitter that he had submitted her activity to the Saudi security authorities. 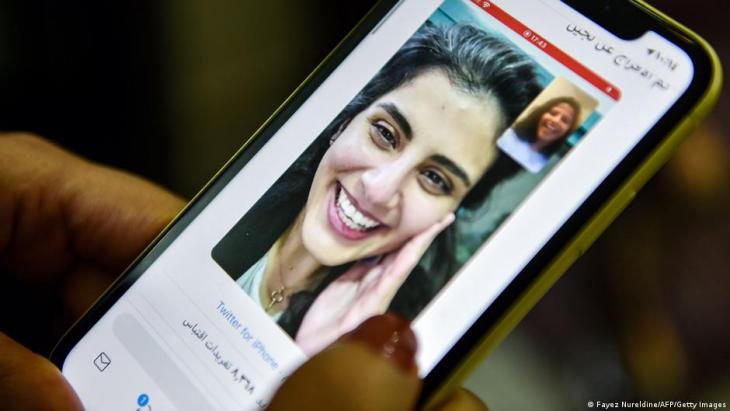 Saudi Arabian women's rights activist Loujain al-Hathloul (shown here) was imprisoned for more than a thousand days until she was released in February 2021. Saudi security forces had abducted her in the United Arab Emirates in 2018 and initially placed her under house arrest, later she was jailed. During her two years abroad, Salam al-Shehab had shared and liked social media posts that called for Loujain al-Hathloul’s release and had supported calls for gender equality in Saudi Arabia. According to The Washington Post, a Saudi Twitter user then informed Shehab on Twitter that he had reported her activity to the Saudi security authorities

"The fact that Salma al-Shehab was blackened by the Saudi state's surveillance apparatus shows that Saudi Arabia, like the UAE, is using and professionalising digital solutions to establish a surveillance regime," said Sebastian Sons, an expert with the Germany-based CARPO think tank.

Moreover, the country's latest verdict against al-Shehab, who belongs to the Saudi Shia minority, could also be a warning for Saudi Arabia's arch-enemy Iran, which is mostly Shia. "Furthermore, the Shia minority in Saudi Arabia has been the victim of discrimination and marginalisation for decades, and is often used as a political scapegoat to promote Saudi nationalism. In this context, the arrest is certainly also, but not only, a signal against the Saudi Shiites," Sons added.

While Saudi Arabia's de facto ruler, Crown Prince Mohammed bin Salman (MbS) has been spearheading the kingdom's modernising programme "Vision 2030" – which includes more rights for women, opening the country for tourism and diversifying from oil – the ambitious 36-year-old's rule is equally linked to an iron fist when it comes to critical opinions, including calls for gender quality.

"The rise to power of MBS in 2017 was accompanied by the adoption of draconian laws such as the 2017 counter-terrorism law and the establishment of the Presidency of State Security and the Public Prosecution Office," said Ramzi Kaiss, MENA Rights Group's legal and policy officer. According to the Geneva-based human rights watchdog, both of these bodies have been responsible for committing widespread violations of human rights ahead of legal trials.

Their judicial arm is the Specialised Criminal Court (SCC) in Riyadh, the one that sentenced al-Shehab this week. "However, this court is neither independent nor impartial, in light of the undue influence by the King of Saudi Arabia and MbS on the selection of the judges," Kaiss added. For him, al-Shehab's unprecedented sentence confirms the observation "that the Saudi authorities feel emboldened in using the SCC as a tool of repression to prosecute and punish any form of speech that is deemed to be critical of the authorities".

Our governments seem awfully quiet about Saudi Arabia's jailing of #Salmaalshehab and our news papers not much better. If it was Russia or Iran we'd be sanctioning by now. Saudi Arabia is just as much of a threat as Putin. https://t.co/DYJ4aKBWwI

This view is strongly echoed by Lina al-Hathloul, the sister of women's activist Loujain al-Hathloul. "This appalling sentence makes a mockery of the Saudi authorities' claims of reform for women and of the legal system," she wrote in a statement in her role as head of communications and monitoring for the London-based human rights watchdog Alqst.

The shortfall of gas after Russia's invasion of Ukraine has boosted the kingdom's self-esteem as a global fuel provider to a new level.

In turn, MBS has been travelling again, and was yet again visited by European state leaders. Also, about a month ago, even U.S. President Joe Biden travelled to Saudi Arabia to revive bilateral relations. Biden in particular had shunned MBS as a "pariah" after the murder of the Saudi critic Jamal Khashoggi in 2018.

Lama Fakih, Middle East director at Human Rights Watch, therefore had high hopes that the U.S. government would apply pressure in the case of al-Shehab. "But the administration's failure to critique the sentencing to date speaks volumes," she said.

Lina al-Hathloul, for one, is not surprised. "Saudi activists warned Western leaders that giving legitimacy to the crown prince would pave the way for more abuses, which is unfortunately what we are witnessing now," she wrote in her statement.

Meanwhile, Salma al-Shehab's lawyer has 30 days to appeal the sentence, while supporters are calling for her release on Twitter under the hashtag #freeSalmaAlShehab. According to human rights organisation The Freedom Initiative, a petition for clemency has already been filed. It is prerequisite for resuming legal proceedings.

In "Iran. Die Freiheit ist weiblich", journalist Golineh Atai describes the dogged resistance of courageous Iranian women against the Islamic Republic and the mullahs who have ... END_OF_DOCUMENT_TOKEN_TO_BE_REPLACED

Egyptian authorities have Mada Masr in their sights once again after critical reporting. But the editor of the country's last independent news source is adamant they will continue ... END_OF_DOCUMENT_TOKEN_TO_BE_REPLACED

Like Christianity, Europe's history is one of migration. Both have strong roots in the Orient and in cultures thousands of years old. Cultural historian Bernhard Braun invites us ... END_OF_DOCUMENT_TOKEN_TO_BE_REPLACED

Russia is leaving no stone unturned in its attempts to make the Islamic Republic an ally in the war against Ukraine. Fortunately for Vladimir Putin, the mullahs in Tehran are ... END_OF_DOCUMENT_TOKEN_TO_BE_REPLACED

Attitudes towards Rohingya people in Myanmar have shifted, due in part to the civil war. But this does nothing to alleviate their misery. By Rodion Ebbighausen END_OF_DOCUMENT_TOKEN_TO_BE_REPLACED

END_OF_DOCUMENT_TOKEN_TO_BE_REPLACED
Social media
and networks
Subscribe to our
newsletter