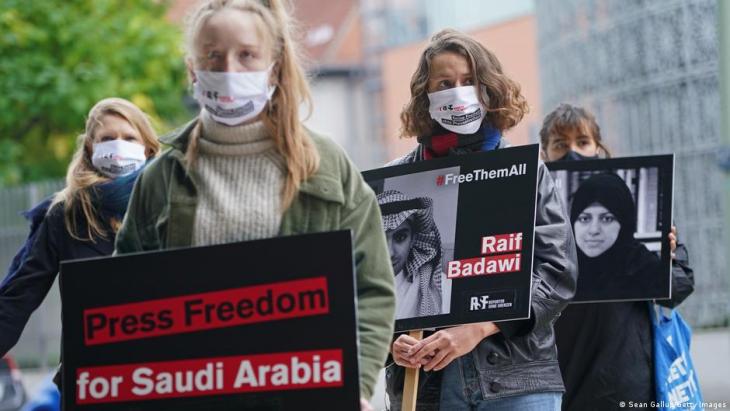 Family and activists hope that Raif Badawi will be released soon. However, the well-known blogger is not the only activist behind bars for expressing dissenting views. By Kerstin Knipp

If everything goes well, the imprisoned Saudi Arabian blogger Raif Badawi will be released next week after almost a decade in jail.

After years of campaigning for his release, human rights activists and his wife Ensaf Haider are pinning their hopes on a release by early March.

Badawi has spent almost ten years behind bars for publishing a blog called Free Saudi Liberals. He was sentenced to a decade in prison in 2014 for "insulting Islam" because he had discussed the separation of religion and state in Saudi politics on his blog.

We hope that he will receive a travel document allowing him to come to Canada as soon as he is released…hope that all the governments that have defended Raif — the European Union, Germany, Austria, the United States — will unite to supervise his release… https://t.co/Skg3fyZssM

While Badawi is among the most prominent political prisoners in Saudi Arabia, he is by no means the only imprisoned dissident. The country has long been criticised for its human rights situation.

It is unclear how many political prisoners are incarcerated in Saudi prisons. The Saudi government claims the number is zero but human rights activists speak of hundreds. Amnesty International has reported that it suspects there could be around 3,000 political prisoners in Saudi Arabia.

But Human Rights Watch says this is no indication that the situation is improving. "They [the freed activists] remained banned from travel and are serving suspended sentences, allowing the authorities to return them to prison for any perceived criminal activity," the organisation wrote in their World Report 2022.

Among those released in 2021 was women's rights activist Loujain al-Hathloul. She was part of a group that had demanded that women be allowed to drive in Saudi Arabia. 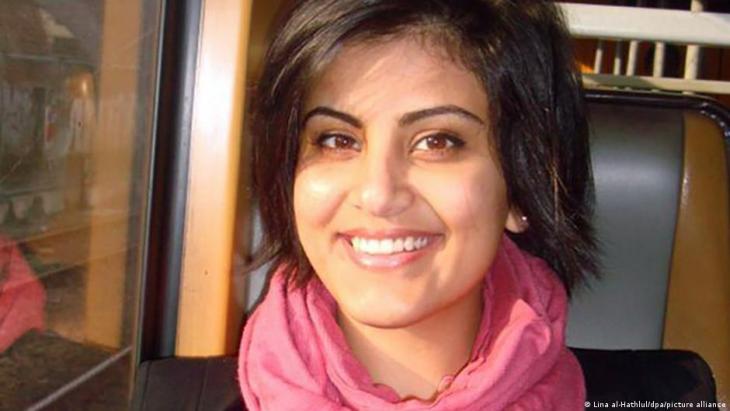 The young rebel from Al-Qassim: Loujain al-Hathloul was arrested in May 2018. She headed up the campaign to allow women to drive as well as demanding the abolition of Saudi Arabia's notorious guardianship system. It was not the first time Hathloul, from the conservative central region of Al-Qassim, had been behind bars. Saudi authorities put her in juvenile detention in late 2014 when she tried to drive into the kingdom from the UAE. Hathloul was freed 73 days later following an international campaign

Al-Hathloul was arrested in 2018, even though just three weeks after her incarceration, the ban on female drivers was lifted.  Throughout her time in prison, her family raised allegations of torture.

Even though she was released from prison in 2021, she is neither allowed to leave the country nor speak to journalists or human rights organisations. The Saudi state continues to closely monitor her activities.

In 2018, aid worker Abdulrahman al-Sadhan, who was working for the Red Crescent at the time, was arrested. It took three years for him to be sentenced and in April 2021, he was given a 20-year jail sentence. His offence was making critical comments about human rights issues on an anonymised Twitter account.

She also said al-Sadhan had been forced to sign documents that were later used as evidence against him in his trial.

Saudi human rights activist Mohammed al-Otaibi had already served a 14-year sentence when he was sentenced to an additional year in prison in December 2020, and then to another two years in March 2021. 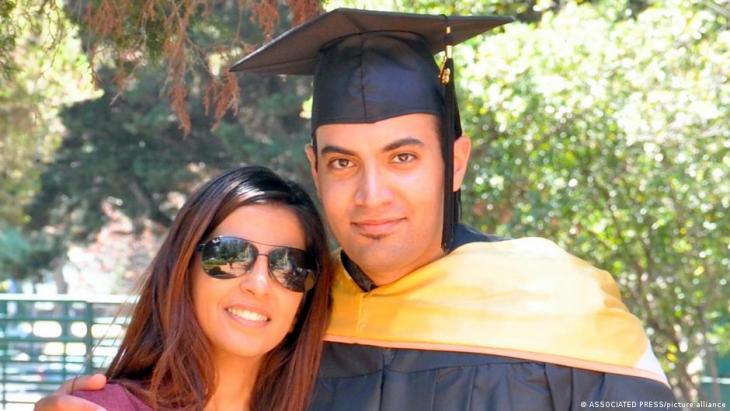 Victim of a conspiracy? Saudi humanitarian aid worker Abdulrahman al-Sadhan’s anonymous Twitter account, which was used to parody issues about the economy in Saudi Arabia, landed him in prison in the kingdom. But, as reported by news agency AP in August 2021, his story may have roots in an elaborate ploy that began in Silicon Valley and sparked a federal case against two Twitter employees accused of spying for the kingdom

Altogether he received a 17-year jail sentence because he founded the Union for Human Rights in Riyadh in 2013, together with three other activists. The group even officially applied to register with the Saudi authorities.

International authors' association PEN ranks the country as one of the three countries in which the most authors are imprisoned. The other two nations are China and Turkey.

One of those in jail in Saudi Arabia is Palestinian-born author Ashraf Fayadh, who has been behind bars since 2013.

He is accused of apostasy, unlawful relations with women as well as writing allegedly secular and blasphemous passages in his book of poetry, Instructions from Within. PEN suggests that the true reason for the arrest could be that Fayadh had filmed and posted a clip that showed members of the religious police in Saudi Arabia whipping a man.

In 2015, Fayadh was sentenced to death. In 2016, however, the sentence was commuted to eight years in prison and 800 lashes. In 2020, Saudi Arabia abolished lashing as a punishment.

Syrian writer Yassin al-Haj Saleh, a fellow at the German branch of PEN, commented that he considers everything about Fayadh's case "shameful". 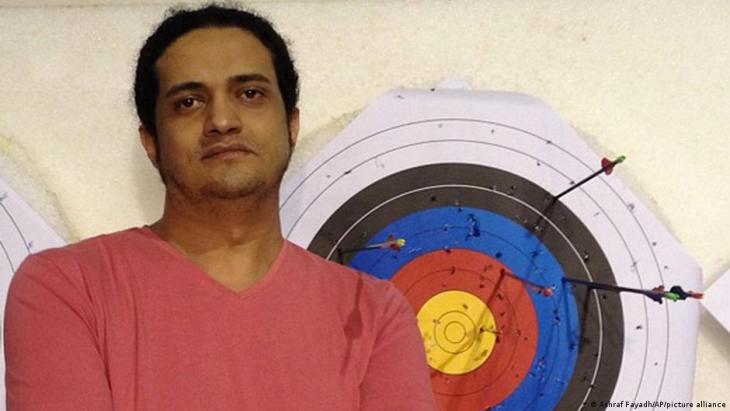 Palestinian-born author Ashraf Fayad has been in jail since 2013. He is accused of apostasy, unlawful relations with women, as well as writing allegedly secular and blasphemous passages in his book of poetry, "Instructions from Within". International authors' association PEN suggests the true reason for his arrest could be that Fayadh filmed and posted a clip showing members of the Saudi religious police whipping a man

The attack on Fayadh's poetry is particularly reprehensible, he said, as Saudi courts were contributing to the impoverishment of an entire culture by accusing the poet of blasphemy.

Political prisoners also come from out of Saudi Arabia's homosexual and LGBTQ community. Members live in constant fear of being exposed and cases against them are regularly based on alleged violations of public order, religious values or public morality.

Other frequently used charges include sodomy and encouraging or promoting homosexuality.

In 2020, a Saudi court sentenced Yemeni blogger Mohamed al-Bokari to 10 months in prison and a fine equivalent to around €2,400. Al-Bokari was found guilty of writing a social media post in which he defended LGBTQ rights in Saudi Arabia.

Members of the Shia Muslim minority in Saudi Arabia are also regularly targeted by Saudi authorities for expressing critical opinions. Numerous prison terms, as well as death sentences, have been imposed on members of the community. Saudi Arabia is a Sunni Muslim majority country.

Human rights activist Israa al-Ghomgham was arrested in 2015 after documenting anti-government protests in Saudi Arabia's eastern Qatif region, a majority-Shia area. Prosecutors sought the death penalty for al-Ghomgham, who would have been the first female Saudi human rights defender to be executed.

According to the Gulf Center for Human Rights, al-Ghomgham was denied access to a lawyer and was also mistreated in custody. Her death sentence was dropped in 2019 and, in 2021, commuted to an eight-year prison term.

Adapted from the German by Jennifer Holleis

Plans for Neom, the futuristic ecocity in Saudi Arabia's desert, are taking shape. In the form of a straight line, for nine million inhabitants. Merely a pipe-dream? Commentary by ... END_OF_DOCUMENT_TOKEN_TO_BE_REPLACED

Internet giant Google is creating a "cloud region" in Saudi Arabia. It says it will protect users there. But digital rights activists say the firm will be putting the lives of ... END_OF_DOCUMENT_TOKEN_TO_BE_REPLACED

With his fist bump greeting for a man he previously called a pariah, US President Biden has paved the way for Saudi Crown Prince Mohammed bin Salman's return to the international ... END_OF_DOCUMENT_TOKEN_TO_BE_REPLACED

Foresight is needed to turn the tide of German policy. Being independent of Russia must not lead to dependence on authoritarian regimes in the Middle East. By Kristin Helberg END_OF_DOCUMENT_TOKEN_TO_BE_REPLACED 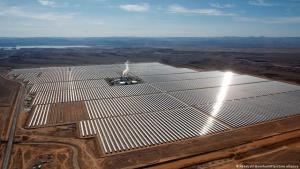 The war in Ukraine is likely to change the energy market in the Middle East and North Africa – in favour of solar energy. While the region is still punching way below its ... END_OF_DOCUMENT_TOKEN_TO_BE_REPLACED
Author:
Kerstin Knipp
Date:
Mail:
Send via mail

END_OF_DOCUMENT_TOKEN_TO_BE_REPLACED
Social media
and networks
Subscribe to our
newsletter