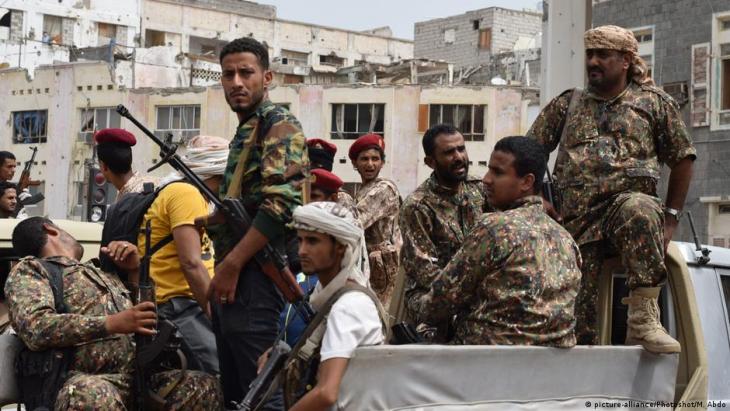 After three days of heavy combat, UAE-backed Giants Brigades and Shabwa Defence forces secured control over the city of Ataq, formerly held by Islah-affiliated forces, which the United Arab Emirates has long viewed as an offshoot of the Muslim Brotherhood, the Islamist group opposed by Abu Dhabi across the region.

The latest tensions are a crucial test for the ruling Presidential Leadership Council (PLC), established in April by Saudi Arabia and the UAE, in an attempt to unite the anti-Houthi forces and prevent in-fighting between the different factions. The council assumed its powers from the internationally recognised, yet highly unpopular, president-in-exile Hadi, greatly influenced by Saudi Arabia. Many observers claim that the conflicting agendas of PLC members pose a major obstacle to the council’s operational powers.

The last nail in the coffin?

For Alexandra Stark, senior researcher at New America think tank, the latest round of fighting is indicative of one of the anti-Houthi coalition’s inherent and long-standing problems: disunity among its military factions, who are "only nominally united by the common goal of defeating the Houthis, but beyond that, have different interests and goals", as she told Qantara.de.

Many are therefore wondering whether the latest flare-up will turn out to be the last nail in the coffin for a united Yemen. The seizure of Ataq, for example, was celebrated by southerners, especially when the victors symbolically lowered the flag of united Yemen and replaced it with the pre-unity flag of South Yemen. 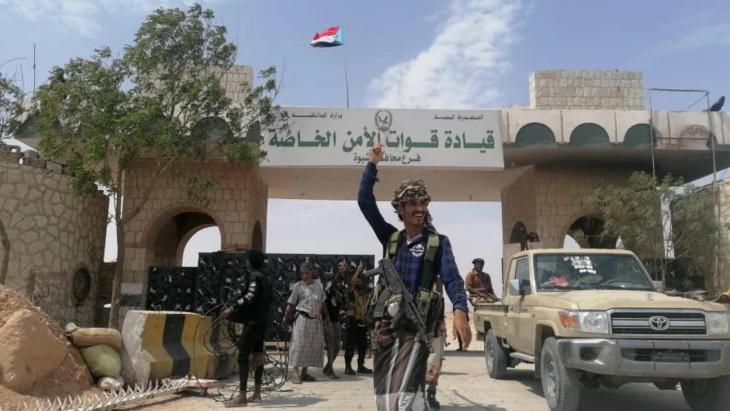 Crucial test for the ruling Presidential Leadership Council (PLC): after three days of heavy combat, UAE-backed Giants Brigades and Shabwa Defence forces secured control over the city of Ataq, formerly held by Islah-affiliated forces, long viewed as an offshoot of the Muslim Brotherhood, the Islamist group opposed by the UAE across the region. The PLC was established in April 2022 by Saudi Arabia and the UAE, in an attempt to unite the anti-Houthi forces and prevent in-fighting between the different factions

In Stark’s opinion, this latest event is not necessarily the death knell of the PLC's efforts, though it does pose a serious challenge. It does, however, illustrate a broader issue: "Even if the PLC and the Houthis are able to maintain the truce and work out some sort of peace agreement, that will not solve other, long-standing issues that stretch back to the 1994 civil war and before that, to when Yemen was two separate states."

In similar vein, Asher Orkaby, a research associate at Harvard University’s Davis Center and a lecturer at the Harvard Extension School observes that fractures were evident in the aftermath of the 2019 Riyadh Agreement and the ultimate failure of the latter to fix the tenuous alliance between the Riyadh-based ROY and the UAE backed STC (Southern Transitional Council). "Tensions continue even under the PLC, because the council does not have legitimacy or a strong physical presence in the country's south," he told Qantara.de.

The Shabwa events, however, do "indicate a new alliance emerging inside the PLC," says Susanne Dahlgren, a scholar at the Middle East Institute and lecturer at Finland-based Tampere University. This 'anti-Islah alliance' appears to have won the support of PLC Chairman Rashad Muhammad al-Alimi since the battle of Shabwa. She has also noticed an emergence of a new narrative that links "the attempts of Islah to gain control in the south with Houthi advancements in the north."

While some observers fear that bloody rivalry may threaten the unity of the Yemeni state, Abdulghani al-Iryani, senior researcher at Sana'a Center for Strategic Studies said that this is not necessarily true. According to al-Iryani, what it does threaten is "the possibility of restoring Yemeni unity in the context of a simple centralised state dominated by the northern elites, as envisaged by several Yemeni factions, including Islah." He continued: "Miscalculations by regional actors, specifically UAE, in considering the option of declaring a southern state, while leaving Saudi Arabia with an ally of Iran – the Houthis – controlling the north, will perpetuate instability in Yemen."

Fragility of the PLC

While the latest infighting exposes deep cracks within the country’s new leadership, Dahlgren said that one cannot expect the process of merging different militia to succeed in just a few months. She also confirmed that the PLC established a committee just a few days ago to monitor the unification of various militias. While Yemenis harbour no great expectations, future political events will determine how this process ultimately plays out. 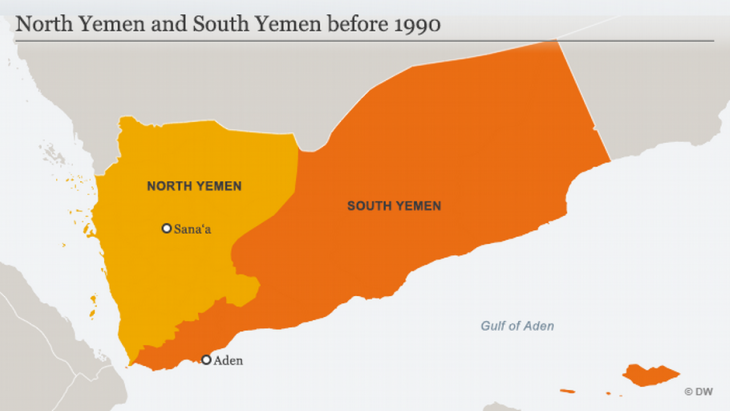 Acute governance deficits: the Southern Transitional Council and Al-Ansar – the party of the Houthi rebels – may well enjoy regional grassroots support, but whether they can govern is doubtful. According to Abdulghani Al-Iryani, senior researcher at Sana’a Center for Strategic Studies, both display worrisome internal dynamics. He argues that once they "finally realise that the option of having their own separate states is not viable, they will turn their attention to reaching a power-sharing deal that restores a unified, balanced and decentralised Yemeni state"

She does, however, think that opportunities for collaboration within the anti-Houthi front have a greater chance of success "if the Islah is isolated and prevented from fighting against southern militias on southern soil."

According to Dahlgren, the recent campaign in Abyan ('Eastern Arrows') "is an indication of the unified front of al-Alimi and the STC in clearing the governorate of jihadist elements, which the STC has repeatedly claimed are part of Islah tactics [for Islah, read former vice president Ali Muhsin] for gaining control in the south." Whether such steps will avert the crisis remains to be seen: the legitimacy of Yemeni government headquartered in Aden is eroding and its popularity waning.

After all, as Asher Orkaby points out: "A government that authorises a strike on its own population does not endear itself to the citizenry." Moreover, the poor performance of the PLC in showing leadership has only served to enhance the image of both the STC and Ansar Allah (the Houthis). On the other hand, the internal dynamics within both of these parties are rather worrisome. According to Al-Iryani, both demonstrate acute governance deficits. He argues that once they "finally realise that the option of having their own separate states is not viable, they will turn their attention to reaching a power-sharing deal that restores a unified, balanced and decentralised Yemeni state."

Regardless of future political developments in the country, the key question for any future Yemeni government is how to end the war and deliver enough food to its citizens. To this end, Dahlgren recently presented a peace plan to the UN proposing that "rebuilding should start in different zones that are currently controlled by various parties". In other words, "social problems should be tackled first; a political solution will follow."

While the ongoing legal dispute between Qatar Airways and European aircraft manufacturer Airbus has sent shockwaves across the entire global aviation sector, it may also threaten ... END_OF_DOCUMENT_TOKEN_TO_BE_REPLACED

Like Christianity, Europe's history is one of migration. Both have strong roots in the Orient and in cultures thousands of years old. Cultural historian Bernhard Braun invites us ... END_OF_DOCUMENT_TOKEN_TO_BE_REPLACED

The ruling is part of an ongoing clampdown on dissent and minorities in the kingdom. But so far, it's unlikely to have an effect on the kingdom's newly polished image as a global ... END_OF_DOCUMENT_TOKEN_TO_BE_REPLACED

On 14 August 2022, Pakistan marked the 75th year of its founding. One day later, neighbouring India celebrated its own independence with much pomp. Despite the historical and ... END_OF_DOCUMENT_TOKEN_TO_BE_REPLACED

Plans for Neom, the futuristic ecocity in Saudi Arabia's desert, are taking shape. In the form of a straight line, for nine million inhabitants. Merely a pipe-dream? Commentary by ... END_OF_DOCUMENT_TOKEN_TO_BE_REPLACED
Author:
Stasa Salacanin
Date:
Mail:
Send via mail

END_OF_DOCUMENT_TOKEN_TO_BE_REPLACED
Social media
and networks
Subscribe to our
newsletter