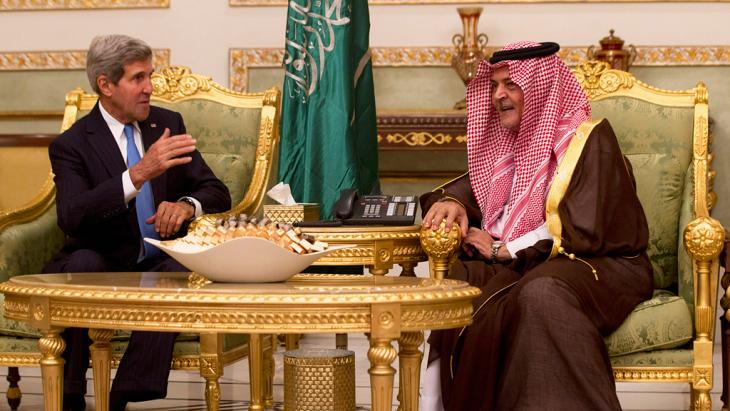 The political changes wrought by the Arab Spring in the region, the prospect of increased oil supplies from deposits outside Saudi Arabia and the possibility of an historical rapprochement between the Saudis' long-term ally (US) and their arch enemy (Iran) have been a game-changer for Saudi Arabia in recent years. Mai Yamani takes a closer look at how the kingdom is reacting to these developments

During the three years of political upheaval in the Middle East since the "Arab Spring" began, the Kingdom of Saudi Arabia has attempted to maintain its dominant status in the region by any means necessary. In 2013, the Saudi royal family searched for regional allies, and sought – as in Egypt – to restore old allies to power. The kingdom also used its vast oil wealth to bring about the type of regional stability with which it has been familiar for decades.

To the relief of the Saudi royals, the Arab Spring did not lead to the creation of functioning democracies in Tunisia, Egypt, Yemen, Bahrain, Libya or Syria. Better still, from their perspective, the Islamist regimes that emerged proved to be either fundamentally incompetent, and thus easily overthrown (as with President Mohammed Morsi's government in Egypt), or merely dysfunctional (as in Tunisia), and thus possessing no appeal as a model for other countries.

Still, the Arab Spring revolutions did fundamentally undermine the pillars of the old regional system with which the kingdom was so comfortable. It ousted reliable old allies like Egypt's Hosni Mubarak and Tunisia's Zine El Abidine Ben Ali (now hiding out in Riyadh), and turned once-tolerable regimes like Bashar al-Assad's in Syria into murderous opponents.

Petrodollars to shore up allies

Saudi Arabia's initial response to the fracturing of a system that it had underwritten with petrodollars was to increase support for those of its allies that were still standing – Jordan, Lebanon and Bahrain. Its next move was to underwrite the Egyptian army's removal of Morsi's Muslim Brotherhood government in Egypt, thumbing its nose at the United States in the process. 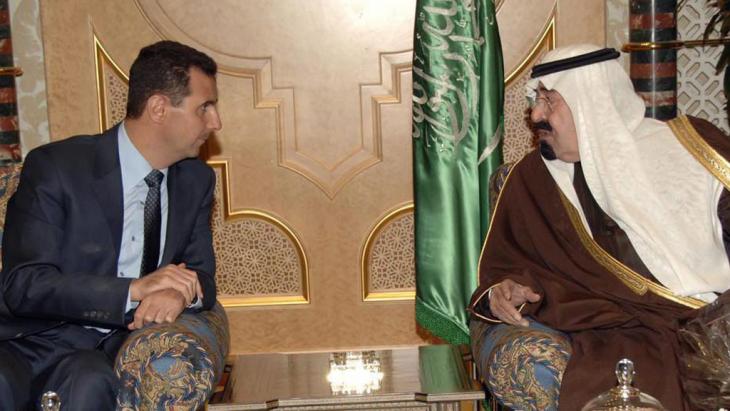 How times have changed: although the Saudis used to tolerate the Syrian regime (this picture dates from 2010), developments in Syria since the start of the Arab spring have changed everything. In its proxy war against Iran (a staunch ally of Syria), Saudi Arabia is now supplying Sunni Syrian rebel forces fighting Assad with money and weapons

As became clear in 2013, Syria is now the main focus of Saudi Arabia's attention in the region for existential reasons. The Saudis consider the struggle between Assad and his opponents a proxy war against their own main adversary, Iran. The kingdom has been the primary source of financing and weaponry for Sunni Syrian rebel forces fighting Assad's army, which is backed heavily by Shia Iran and Hezbollah, the Lebanon-based Shia militia.

Of course, in their struggle against an Iranian regime that is backed by Russia, the Saudi royals would like continued protection from their main ally, the US. But they no longer feel constrained to wait for US approval of their actions or even to refrain from acting against American preferences. Saudi Arabia is experiencing a fear of abandonment by the US, and it is acting accordingly.

Changing relations with the US

Since World War II, the kingdom has been nurtured by the US and has relied on it for military and political support since the first oil concession in 1938. Following US President Barack Obama's refusal to enforce his "red line" concerning the Assad regime's use of chemical weapons, the kingdom's rulers concluded that they were facing a different America from the one that 22 years ago sent a half-million troops to expel Saddam Hussein's forces from neighbouring Kuwait.

The question for the Saudi royals now is this: will the US merely be indifferent to their deepest fears, or will American policy in the region actually aggravate these fears? Iran will be the litmus test for Saudi–US relations in 2014 and beyond.

Iran, a US rival in the region ever since the 1979 Islamic Revolution, may be in the early stages of normalising its relations with America. In fact, this may not prove as difficult as three decades of animus might suggest.

As Henry Kissinger has often argued, the US and Iran have strategic interests that are fundamentally in harmony; what is abnormal is the post-1979 estrangement. Indeed, before the Islamic Revolution, Iran formed the bedrock of US policy in the Middle East and South Asia. The kingdom's rulers, like all royals, think in the past, remember this history well, and fear its repetition. 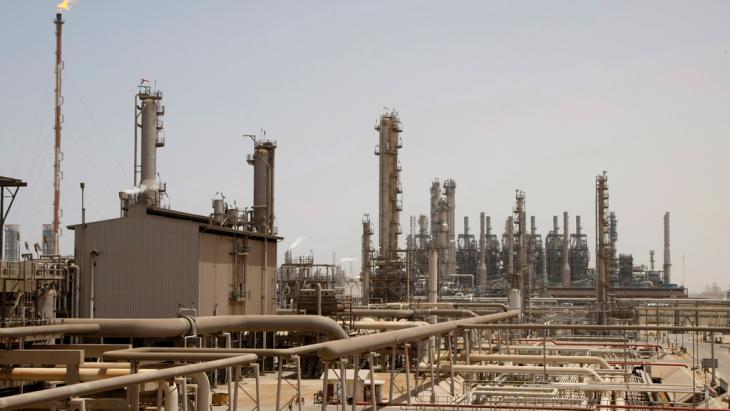 According to Mai Yamani, Saudi Arabia has been using petrodollars to increase support for its remaining allies in the region (Jordan, Lebanon and Bahrain), to underwrite the overthrow of Morsi's government in Egypt and to wage a proxy war against Iran in Syria

Of course, the Saudi royals recognise why America wants to reach a deal with Iran. There is no easy military response to Iran's nuclear programme, and no bombing campaign can eliminate the country's nuclear knowledge. But, though sanctions alone will not stop Iran's nuclear ambitions, their progressive tightening has severely damaged the regime. Now, instead of applying another turn of the screw – and possibly causing the regime to buckle – Obama is easing the pressure.

The issue for the Saudis is not merely Iran's putative nuclear capability. A deal on Iran's nuclear programme would legitimise the regime's regional influence in a way that has not occurred in decades, thereby serving its hegemonic objectives. The deeper threat or fear is that Iran's ultimate target is leadership of Mecca, the cradle of Islam.

That is why the Saudi royals prefer to keep Iran chained with international sanctions. True, even under economic sanctions, Iran has intruded ever more deeply into Arab politics, but it was the US that opened the door by overthrowing Saddam's Sunni-minority regime in Iraq, which ultimately brought an Iranian-backed Shia government to power.

The Saudi regime is particularly wary of Iran's decade-long efforts to persuade the small Gulf sheikhdoms to create security and economic arrangements that exclude the US. This is one reason why the kingdom moved troops into Bahrain when Arab Spring protests by the country's Shia majority erupted – and why America, having learned its lesson in Iraq, gave its tacit consent.

Making matters more bewildering is the declining potency of Saudi Arabia's trump card – oil. New energy supplies – particularly shale oil in the US and Australia – have diminished America's need for the kingdom. The potential return of Iran as a major oil exporter if a nuclear agreement is reached in 2014 would further loosen the Saudi grip on oil prices as "Shia" oil from Iran and Iraq flood the market. In that case, even the Saudi king's adopted title "Custodian of the Two Holy Mosques" would not guarantee leadership of the Muslim world.

From the Kingdom of Elam to Alexander the Great, to the Shah dynasties and the Islamic Republic, Iran's cultural sites reflect its long history. ... END_OF_DOCUMENT_TOKEN_TO_BE_REPLACED

The assassination of the Iranian general Qassem Soleimani in a surprise U.S. drone strike is being used by the Islamic Republic of Iran to political ends, says Iranian journalist ... END_OF_DOCUMENT_TOKEN_TO_BE_REPLACED

In recent years, Tehran had pushed a clever public-relations campaign to depict Soleimani as a Napoleon- or Caesar-like warrior-poet. He was even mooted as a likely presidential ... END_OF_DOCUMENT_TOKEN_TO_BE_REPLACED

Trump’s sweet revenge could swiftly turn bitter, after all the U.S. attack is a direct declaration of war against the Iranian Revolutionary Guard and its elite Quds troops ... END_OF_DOCUMENT_TOKEN_TO_BE_REPLACED

With "Assad or We Burn the Country", Sam Dagher has furnished the world with some genuine ammunition against the Syrian regime's on-going campaign of disinformation. The only ... END_OF_DOCUMENT_TOKEN_TO_BE_REPLACED
Author:
Mai Yamani
Date:
Mail:
Send via mail