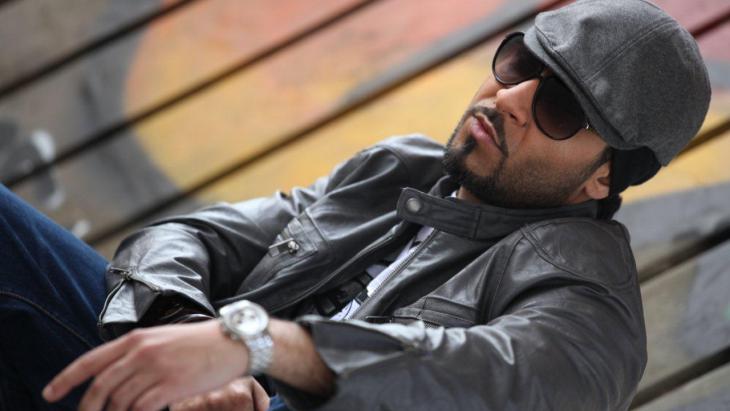 Saudi Arabia′s hip-hop scene is booming. Except that the musicians rarely get to perform live. A visit to Jeddah, the rap capital of the conservative Gulf state. By Jannis Hagmann

Ali Bash has left his baggy pants and baseball cap at home. With his shirt tucked in and sporting a thin tie, he looks the odd one out among his friends. Ali has one hour, perhaps two. After lunch he has to go back to the hospital where he works as a clerk. "It′s hard to make a living from music here," says the rapper, who seems far tamer in real life than in his videos. "Only a handful of musicians manage that in Saudi Arabia."

Outside the studio windows, clouds have settled over the roofs of Jeddah; a sandstorm is blowing desert air into the coastal city. In the air-conditioned interior, Ali′s colleagues from the J-FAM hip-hop crew adjust the cameras for the video shoot. A mobile vibrates to a tinny beat. "My rap shoots one goal after another," goes the hook, "My style′s the same, I′m true to myself."

"Rap Higga" is the name J-FAM have given this song – a play on words made up of "nigga" and "Hijaz", the coastal region on the Red Sea. Hijaz is home to the holy sites of Mecca and Medina and also the port town of Jeddah, Saudi Arabia′s most liberal and fun-loving city. This area, on which pilgrims from all over the world have been converging for centuries, has recently seen the development of a diverse cultural scene. But the relative openness has also drawn MCs from all over the kingdom, making Jeddah the capital of Saudi hip-hop.

Rap Higga? Ali laughs, "We like to boast." There are many differences between Saudi hip-hop and its US forerunner, but that is not one of them. You can forget gangster machismo though. Dissing, cursing, drugs and bitches don′t go down well in Saudi Arabia, says Ali Bash. "That′s not our style."

Live performances but no dancing

Rap is one of the fastest-growing genres in Arabic music – and not just since the "Arab Spring", when the peoples of the region shook off the restraints imposed by their authoritarian rulers. In the tense early nineties, before the civil war in Algeria, hip-hop established itself as a popular form of protest culture.

No other musical genre lent itself so well to subversion as rapping, or expressed resentment towards a corrupt political establishment as perfectly as hip-hop. Somewhat later, crews took to the stage in the occupied Palestinian territories. The Internet and the revolutions from 2011 onwards finally led to the breakthrough of Arabic rap. The Saudis weren′t frontrunners in the scene, but Ali Bash and J-FAM are far from alone in the kingdom. The Saudi MCs do face one major problem, however: "There aren′t enough live gigs," says Ali′s colleague Ayzee, the band′s R&B singer, as the stylist does his make-up. 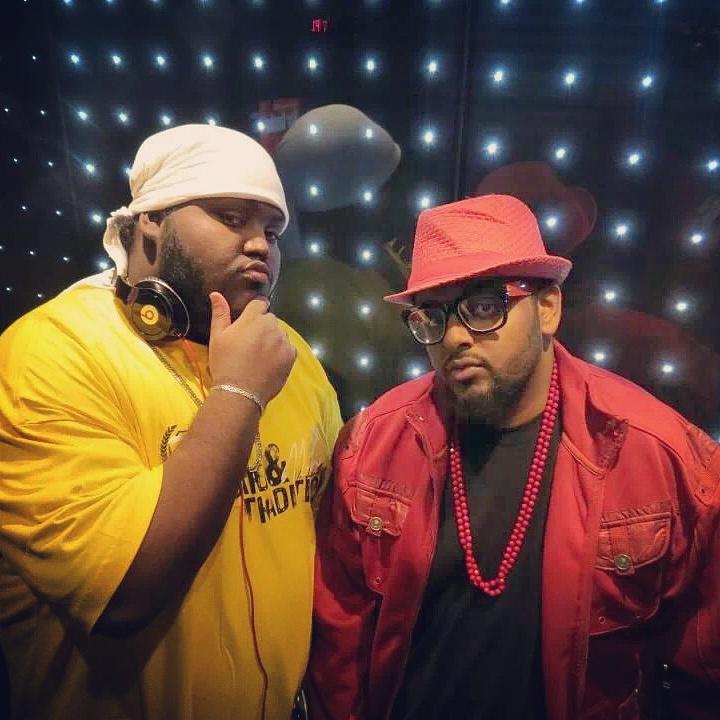 A thorn in the side of Saudi Arabia′s guardians of morality: an album release by hip-hop duo ″Blak-R″ appeared with three fewer songs on it in Saudi Arabia than elsewhere. The information ministry didn′t like the lyrics, says ″Blak-R″ rapper Joe

The country′s conservatives reject live music as un-Islamic. There are no clubs and the religious police often make sure women and men are seated separately at public performances. They can′t even play regularly outside the country either, says Ayzee, as they′re all too busy with their jobs. "Because they have no experience, many rappers here don′t know how to behave on stage," says Ali.

One person who wants to change that is "Big Hass". He pulls up outside his radio station on Jeddah′s vibrant Tahlia Street in a four-seater overflowing with empty cans and Coke bottles. On Saturday evenings, when the city′s wealthy young generation meets for illicit dates in the malls, the presenter invites young artists onto his show Laish Hip-Hop? (Why Hip-Hop?). Radio offers them a platform they otherwise don′t have. "Sadly, there aren′t any live venues here; that′s not allowed."

That′s not strictly true, however. "The Beat" is the name of a concert series organised by Big Hass himself. He has brought together artists from the region on stage several times now – before a live audience, but with no dancing. Many people remember the last show with excitement. "It practically exploded," says Big Hass.

It′s not an uncommon phenomenon in Saudi Arabia for things to exist that officially aren′t permitted. Big Hass uses the word "underground" to describe it. "When I say underground," he explains, "then I mean private events." If an event is private, it is none of the authorities′ business. And as long as the artists don′t go too far, they can work undisturbed. That goes for concerts, videos – and also for lyrics.

Criticising the royal family is just as taboo for rappers as it is for the country′s media. And the powerful religious establishment is also rarely the target of their lyrics. Anyone who doesn′t stick to these rules risks exile. Or jail, as the case of the religion-critical blogger Raif al-Badawi has shown. "Saudi hip-hop is not about revolution and uprisings," says Big Hass. Saudi rappers aren′t interested in that anyway, he′s convinced. "They′re issues that just aren′t on young Saudis′ minds."

Yet it′s not all sweetness and light. An album release by hip-hop duo Blak-R appeared with three fewer songs on it in Saudi Arabia than elsewhere. The information ministry didn′t like the lyrics, says Blak-R rapper Joe in one of Jeddah′s countless malls.

In his hip-hop outfit, he looks like he′s just jumped out of the music video Mamno3 al Shabab (Boys Banned). The song is a protest against boys not being allowed into malls without female companions – for fear they might want to pick up women. Despite the censorship, the track spread quickly on YouTube. Mamno3 al Shabab wasn′t really political, though, says Joe; Blak-R keeps clear of politics. "It′s better to keep your hands off politics, it only gets you into trouble."

Ambassadors from the heart of society

Even Saudi Arabia′s most successful rapper Qusai tends to avoid contentious issues. Although he has titles like "Arab World Unite" and "Change", they′re always about regional and never Saudi Arabian politics. "We don′t have freedom of speech here, but we respect that," Qusai says openly, "because the circumstances are better here than elsewhere." You only have to look at Syria or Libya, he says, to understand that change isn′t always all positive. "It is a blessing that everything is still holding together here."

Qusai embodies Saudi rap like no other. Its main players don′t hail from the multicultural areas of the cities, don′t live under occupation like the Palestinian MCs, and aren′t politicised by social unrest like young Algerians. The Saudi MCs come from the oil-rich Gulf monarchy′s urban middle class.

There′s another thing that distinguishes the Saudis from their Arab peers – it′s almost impossible for them to resist commercialism. Companies like Red Bull sponsor their rare events. For the rappers, these are often the only opportunity to perform; for the corporations they′re a welcome chance to promote their products to a young generation keen on consumption. Nor has the profit logic of the global entertainment industry passed Saudi rap by. If you want to make it big, you have to sign up for one of the pan-Arab TV shows like Arabs Got Talent. Presented by none other than Qusai, the talent show is closely modelled on the global format.

In the studio above the roofs of Jeddah, J-FAM singer Ayzee is also banking on casting show success. He′s quit his job at a bank. He has to get a move on with the video for Rap Higga. The plane to Beirut is waiting. There, Ayzee is set to try his luck as a solo artist on The X-Factor. The show has millions of viewers from Morocco to Syria. If the judges treat him well, he can expect not only fans all over the Arab world, but also lucrative contracts in the TV and music industry. Perhaps that will make it easier for him to go without performing in his home country.

Political analyst Taqadum al-Khatib argues that Egypt can, in co-ordination with its European partners, develop a common vision to solve the complex conflict in Libya. For this to ... END_OF_DOCUMENT_TOKEN_TO_BE_REPLACED

Trump’s sweet revenge could swiftly turn bitter, after all the U.S. attack is a direct declaration of war against the Iranian Revolutionary Guard and its elite Quds troops ... END_OF_DOCUMENT_TOKEN_TO_BE_REPLACED

Key Saudi figures in the Jamal Khashoggi murder investigation have so far escaped trial for his death. But while UN efforts to deliver justice have stalled, difficult questions ... END_OF_DOCUMENT_TOKEN_TO_BE_REPLACED

An expert on Saudi Arabia and the Middle East, Guido Steinberg explains that the drone attacks on Saudi oil facilities last week were partly a manifestation of complex religious ... END_OF_DOCUMENT_TOKEN_TO_BE_REPLACED

The collapse of traditional multilateralism in the Arab world has been accompanied by a significant shift in American Middle East policy under President Donald Trump, writes ... END_OF_DOCUMENT_TOKEN_TO_BE_REPLACED

Abu Dhabi and Riyadh see a natural partnership with Modi’s government, a co-operation that could change the dynamics of the South Asian-Gulf nexus. By Jean-Loup Samaan END_OF_DOCUMENT_TOKEN_TO_BE_REPLACED
Author:
Jannis Hagmann
Date:
Mail:
Send via mail