Primarily new jobs are to be created in the private sector. The reason is that low oil prices have compelled the government to cut public spending. But as private companies have shown little interest in employing Saudis and Saudis themselves prefer working in the public sector, the government is intervening in the labour market to push native workers into the private sector.

Quotas define a target number of Saudi personnel. The ratio is determined by an allocation formula that takes account of industry and company size. There are incentives for employing Saudi labour and sanctions for not doing so. The lower the share of native workers, the more difficult it becomes for companies to obtain work visas for foreign employees. The fees that companies pay for such visas were also raised significantly. On the other hand, Saudis are being guided into the work force in a more targeted way. Newly-created employment agencies offer educational opportunities. They also find positions for unemployed people at private firms. Innovative job fairs, moreover, put job seekers in touch with potential employers.

So far the Saudification aspirations have had only limited impact. While the number of Saudis employed in the private sector rose from around 486,000 in 2004 to 1.5 million in 2014, the number of foreign workers grew from 4.1 to 8.5 million in those 10 years. Foreigners still make up 89 % of the staff of private companies. 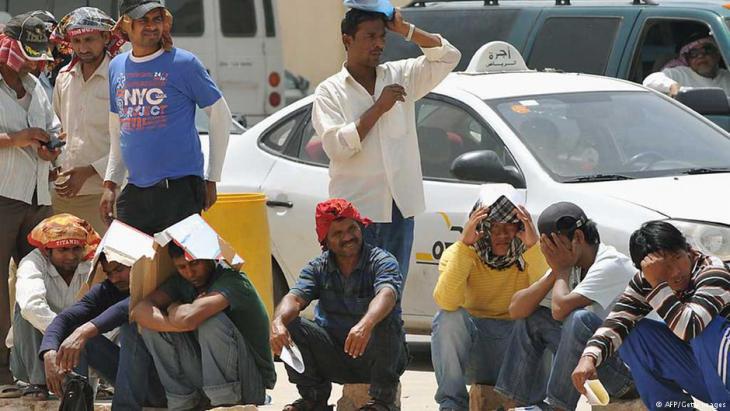 Success of the "Saudification programme" limited: while the number of Saudis employed in the private sector rose from around 486,000 in 2004 to 1.5 million in 2014, the number of foreign workers grew from 4.1 to 8.5 million over the same ten years, points out economist Nassir Djafari

Moreover, the government’s requirements are constantly being sidestepped by companies that pay Saudis to register as employees without actually hiring them. This practice allows companies to fill their quotas while still being able to do as they please.

Female employment in a man’s world

As part of the Saudification programme, companies receive bonus payments for employing women. Women are being actively encouraged to seek jobs in industry and also to work from home. Women make up just 16 % of the total number of employees, one of the lowest shares worldwide – even in the Arab region. Female employees primarily work in the public sector, usually as teachers at girls’ schools.

International relations are shifting across the Middle East as regional powers adapt to America's retrenchment and China's growing influence. Although the region could become the ... END_OF_DOCUMENT_TOKEN_TO_BE_REPLACED

"The people aren’t ready for democracy" has been the constitutional basis for Arab tyranny, its favourite slogan and its sacred narrative for more than a century. Yet, asks Khaled ... END_OF_DOCUMENT_TOKEN_TO_BE_REPLACED

Caught up in discussions on the future of local Afghan forces and new Islamist threats, people are failing to grasp the historic scale of the debacle, argues Stefan Buchen in his ... END_OF_DOCUMENT_TOKEN_TO_BE_REPLACED

The coronavirus pandemic has turned lives upside down all over the world. In the Middle Ages, however, people lived with epidemics all the time. The best and most famous ... END_OF_DOCUMENT_TOKEN_TO_BE_REPLACED

The Saudi national team is set to play the German Olympic squad at the Olympics in Tokyo later this month – a chance for the outsiders to make their mark. At the same time, and ... END_OF_DOCUMENT_TOKEN_TO_BE_REPLACED
Author:
Nassir Djafari
Date:
Mail:
Send via mail

END_OF_DOCUMENT_TOKEN_TO_BE_REPLACED
Social media
and networks
Subscribe to our
newsletter