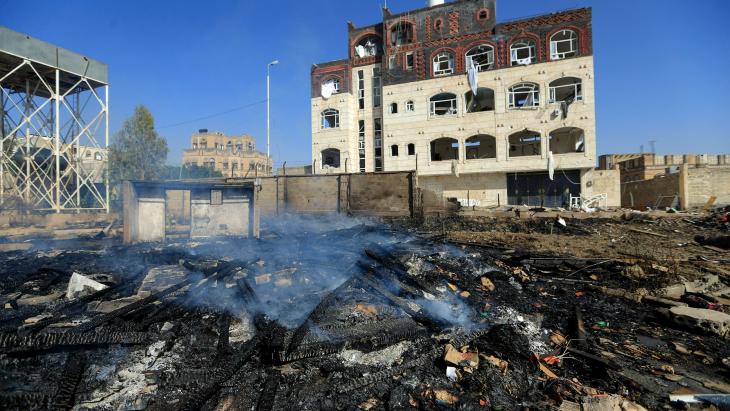 The Saudi-led coalition launched air strikes on Sunday on Yemen hours after Houthi rebels announced a three-day truce, with the UN chief condemning a surge in violence as the war enters its eighth year.

The raids targeted Sanaa, the rebel-held capital, according to Saudi Arabia's Al Ekhbariya TV, which tweeted "the start of air strikes on Houthi camps and strongholds in Sanaa" around midnight.

The attacks began shortly after the Iran-backed Houthis announced a three-day truce and offered peace talks on condition that the Saudis stop their air strikes and blockade of Yemen and remove "foreign forces".

Just a day earlier, the rebels had fired drones and missiles at 16 targets in Saudi Arabia, turning an oil plant near Jeddah's Formula One track into a raging inferno as aghast drivers looked on.

The flurry of attacks and diplomacy came as Yemen, the Arab world's poorest country, on Saturday marked seven years since the Saudi-led intervention against the Houthis, who seized Sanaa in 2014.

The conflict has killed hundreds of thousands of people directly or indirectly and displaced millions, creating what the United Nations calls the world's worst humanitarian crisis.

He said that eight civilians, including five children and two women, were reportedly killed in retaliatory strikes on Sanaa following Friday's rebel attacks.

The UN staff compound in the city was also damaged, his spokesman Stephane Dujarric said in a statement.

"The Secretary-General strongly condemns the recent escalation of the conflict in Yemen," the statement said, adding that Guterres is "deeply concerned" about reports of coalition attacks on the lifeline port of Hodeida.

He urged the warring parties to "immediately de-escalate" and reach a "negotiated settlement" with the help of Hans Grundberg, the UN's special envoy to Yemen.

Thousands of people demonstrated in Sanaa on Saturday, holding placards and chanting, to denounce the Saudi-led intervention which included nine countries when it was launched on 26 March 2015.

Today, it is largely just Saudi Arabia and, to a lesser extent, the United Arab Emirates, which says it has withdrawn troops from Yemen but remains an active player, training militias on the ground.

The coalition's intervention has stopped the Houthis' advances in the south and east of the country but has been unable to push them out of the north, including Sanaa.

"Militarily, the war is now at stalemate," Elisabeth Kendall, a researcher at Oxford University, told journalists this week.

Saudi Arabia "may at this point be keen to extract itself" from Yemen, she said.    (AFP)

More on this topic
Qantara photo essay: Yemen: Aid organisations running out of moneyYemen, Ukraine, the world: Fighting fake news and disinformationYemen and the Biden administration: "After the war, Yemen will no longer be a sovereign state"
Home
Print
Newsletter
MoreAll Topics

END_OF_DOCUMENT_TOKEN_TO_BE_REPLACED
Social media
and networks
Subscribe to our
newsletter