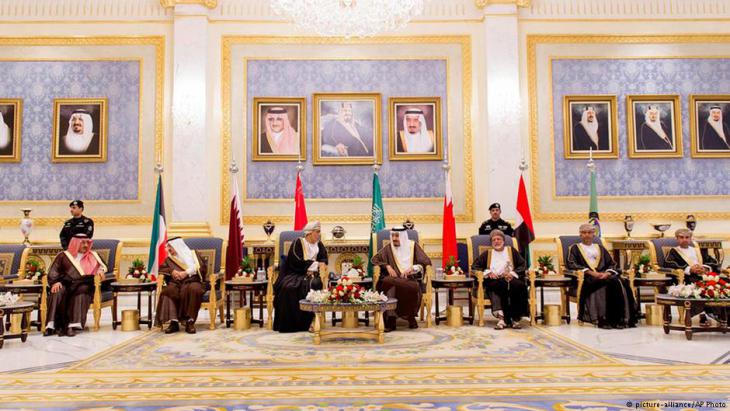 Saudi ultimatum for Qatar
Turning up the heat?

The list of thirteen demands given to Qatar on Friday by Saudi Arabia and the UAE does not represent a serious attempt to settle the conflict. Even so, a split in the Gulf Cooperation Council seems unlikely. By Anna Sunik

Almost three weeks after Saudi Arabia, the United Arab Emirates (UAE), Bahrain and Egypt declared a blockade on Qatar, the Gulf emirate has been served with an ultimatum. The states that signed the document, now bolstered by additional Arab and African support, presented Qatar with a list of 13 demands on Friday.

Among other things, Qatar’s neighbours are calling for an end to its diplomatic and military relationship with Iran, the removal of the Turkish military base currently being built there, an end to its support for "terrorist, sectarian and ideological groups" (mentioning the Muslim Brotherhood, Hezbollah, IS, al-Qaida and the former Nusra Front) and the closure of al-Jazeera and other media apparently financed by Qatar, such as Middle East Eye.

They also demand a closer alignment with the policies of the other Gulf States, especially with regard to mutual support in the fight against internal political opposition. The list ends with demands for reparations and a system of external checks to ensure that the demands are met. Qatar has ten days to comply before the list becomes invalid.

Mechanisms for sanctions are not mentioned, but a confrontation is likely once this deadline has passed. The UAE’s foreign minister, Anwar Gargash, has however spoken in terms of a "divorce" rather than an escalation, should this occur. Qatar has so far refused to enter into negotiations until the blockade is lifted.

Neither "reasonable" nor "actionable"

The hope of the parties involved, as the U.S. Secretary of State Rex Tillerson also put it, was that the demands would be "reasonable and actionable". This hope seems to have been dashed. Some of the demands remain vague; many require a huge change of course from Qatar in terms of both its foreign and domestic policy. This, combined with the implementation of reparation demands and external checks, would elevate Saudi Arabia and the UAE to become de facto sovereigns over Qatar and are therefore unrealistic.

On the other hand, symbolic concessions on Qatar’s part, similar to those during the last crisis in 2014, when Saudi Arabia, the UAE and Bahrain pulled their ambassadors out of Doha, would be almost impossible to justify internally in the states that have issued the ultimatum. The demands and the rhetoric to date, have been too confrontational for that. Both sides therefore risk losing face if the compromises they make are too great. 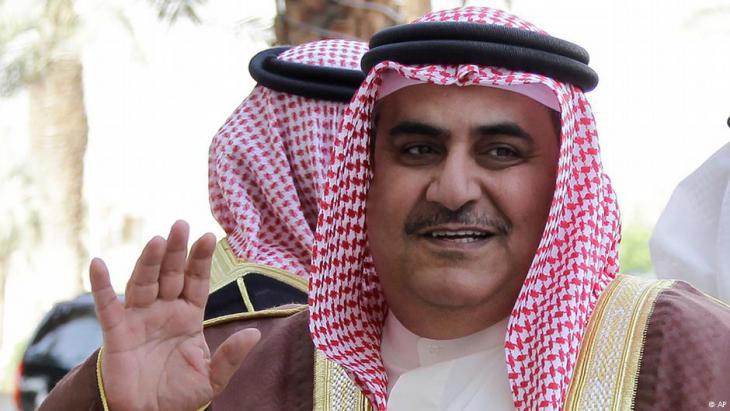 Picking a fight: Bahrain′s foreign minister has accused Qatar of contributing to a military escalation of the political conflict. "The foundation of the dispute with Qatar is diplomatic and security-oriented, never military," Sheikh Khalid bin Ahmed Al Khalifa said on Twitter. "Bringing in foreign armies and their armoured vehicles is the military escalation that Qatar has created." Bahrain, along with Saudi Arabia, the UAE and Egypt, declared a boycott against Qatar three weeks ago, making a lifting of the embargo conditional upon the emirate meeting the terms of the ultimatum

In view of this, further aggravation of the situation seems unavoidable. Indeed, judging by both its form and content, the list was either produced in a great hurry or was never intended as a realistic attempt at compromise in the first place.

The list is more understandable either as a maximum demand, intended to be negotiated down, or – like the Austro-Hungarian ultimatum to Serbia in 1914 (which made do with three fewer points) – as a conscious strategy of escalation.

The end of the Gulf Cooperation Council?

The crisis, then, is serious and difficult to resolve. But it does not necessarily call into question the existence of the Gulf Cooperation Council (GCC), as an historical perspective shows. The GCC – and before it was founded, the individual member states – the Arab monarchies of Bahrain, Qatar, Kuwait, Oman, Saudi-Arabia and the UAE – have never been a unified, harmonious block. In fact, Qatar has also been regarded as a troublemaker in times gone by, especially when Hamad bin Khalifa Al Thani, the father of the current emir, displaced his own father in a palace coup.

In the 1980s and 90s, territorial conflicts with Bahrain and Saudi-Arabia even led to three brief militarised confrontations. In a crisis of comparable severity between Qatar and Bahrain in the late 90s, each emirate made attempts to subvert the other and topple its regime. Emir Hamad accused the other Gulf States of supporting a counter-coup by his father. At the start of the new millennium, outstanding territorial disputes were gradually settled. Qatar and Bahrain took up official diplomatic relations for the first time. 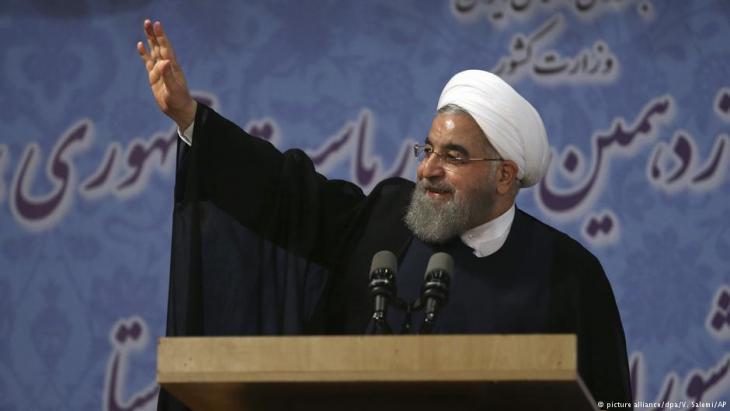 Backing from Tehran: Iran′s President Hassan Rouhani has assured Qatar of his support and refused to accept a blockade. Iran′s airspace as well as all transit routes via land and sea are to remain open to Qatar. Saudi Arabia and the other three states have blocked their airspace for flights to and from Qatar. The Turkish President Recep Tayyip Erdogan condemned last Sunday′s ultimatum as illegal interference in the affairs of Qatar

Conflicts broke out again after Qatar began to support targeted uprising movements in Arab countries in 2011, while its neighbours were trying to shore up the status quo. Even after Saudi Arabia jumped on the bandwagon, each state supported different opposition groups. This finally culminated in the confrontation of 2014. But by this time Qatar was ruled by Emir Tamim and there had been a noticeable drop-off in the emirate’s foreign policy activity.

Although the current crisis is more serious than that of 2014, the UAE’s threat of a "divorce" in the form of an exclusion from the GCC may be difficult to achieve, since the members are by no means united. Saudi Arabia and the UAE are leading the confrontation, with Bahrain at their side. By contrast, the remaining member states – Kuwait and Oman – are trying to take a neutral, intermediary role, with Kuwait acting as the chief mediator.

Neither Kuwait nor Oman supports a split in the GCC and both have successfully opposed Saudi initiatives in the past. This means there is no immediate majority to be had in favour of excluding Qatar, in an organisation oriented towards consensus.

The lack of cohesion between the allies in each camp could also have a cushioning effect, since no one "block" can dominate. Qatar is supported by Iran and Turkey and the blockade has made it increasingly reliant on the two non-Arab states. That being said, the sometimes diametrically opposed aims of these countries make for more of an ad-hoc coalition than a unified block. 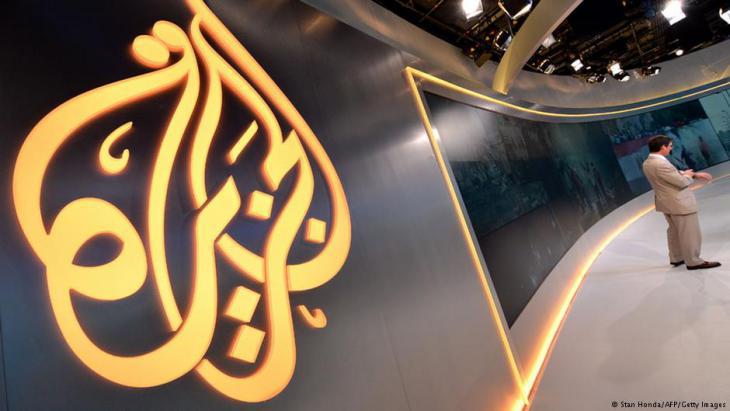 A thorn in the side of the authoritarian Arab leaders: for years al-Jazeera has been a source of irritation for Saudi Arabia and its allies Bahrain, the United Arab Emirates (UAE) and Egypt. The four leaders have therefore sent a clear demand to the Emir of Qatar: switch off al-Jazeera. Forever. Their main concern is that al-Jazeera affords the Muslim Brotherhood and other Islamists a generous media platform

Things only look slightly better on the other side: although Saudi Arabia and the UAE are also supported by a series of other states, most of them (such as the Maldives, Mauritania or the internationally unrecognised government in Eastern Libya) play a more marginal role in the politics of the region.

Apart from Egypt, no other significant Arab nation has joined the "anti-Qatar block" and some allies are still rather half-hearted in their support: Jordan, which is politically and economically dependent on the Gulf States, has stepped back its relations with Qatar, but has not broken them off. Sudan supports the Kuwaiti efforts at mediation and Morocco is not only ignoring the blockade, but has even flown food supplies to Qatar.

The most important ally, however, would be the USA. Despite the erratic policies of the Trump administration, it is unlikely that the USA would support a full escalation. Secretary of State Tillerson has so far acted as a mediator and called for unity.  Sean Spicer, the White House spokesman, described the dispute as "a family issue":  outsiders might help find a solution, but there was no desire to intervene.

An internal solution which limits the conflict is also being emphasised by the parties involved in it. Kuwait has underlined the hope that a solution will be reached within a "united Gulf house". At the start of the crisis, Kuwait also pointed out that Qatar needs to understand the "fears and reservations of its brothers".  Despite his own confrontational politics, Gargash also says that escalation is not an alternative.

The crisis is a serious challenge for the GCC, but probably not an existential threat. In the end, al-Jazeera will probably survive and the banished Qatari camels will be allowed to return to their Saudi pastures.

In Doha, Arabs from Morocco, Tunisia, Egypt and Algeria are gathering to celebrate the first ever FIFA World Cup to be held on Arab soil. The criticism from Europe? Over the top, ... END_OF_DOCUMENT_TOKEN_TO_BE_REPLACED

After a two-year hiatus, the Arab League re-convened at the beginning of November in Algiers against a backdrop of uncertainty and discord. By Pierre Boussel END_OF_DOCUMENT_TOKEN_TO_BE_REPLACED

Anger in the Middle East is spreading over comments made by an official of India's ruling BJP about the Prophet Muhammad, with various countries summoning New Delhi's envoy and a ... END_OF_DOCUMENT_TOKEN_TO_BE_REPLACED

Women's empowerment in the Gulf has become a tool of deflection, rather than a genuine effort to promote women’s full and equal participation in society. By Mira Al-Hussain END_OF_DOCUMENT_TOKEN_TO_BE_REPLACED

A straightforward message emerged from last week’s meeting in the Negev desert of the foreign ministers of four Arab countries, Israel and the United States: Israel is key to the ... END_OF_DOCUMENT_TOKEN_TO_BE_REPLACED

Hamburg lawyer Eugen Balin is a member of the World Jewish Congress' Jewish Diplomatic Corps. At the end of 2021, a delegation of the Corps visited the United Arab Emirates, which ... END_OF_DOCUMENT_TOKEN_TO_BE_REPLACED
Author:
Anna Sunik
Date:
Mail:
Send via mail

END_OF_DOCUMENT_TOKEN_TO_BE_REPLACED
Social media
and networks
Subscribe to our
newsletter