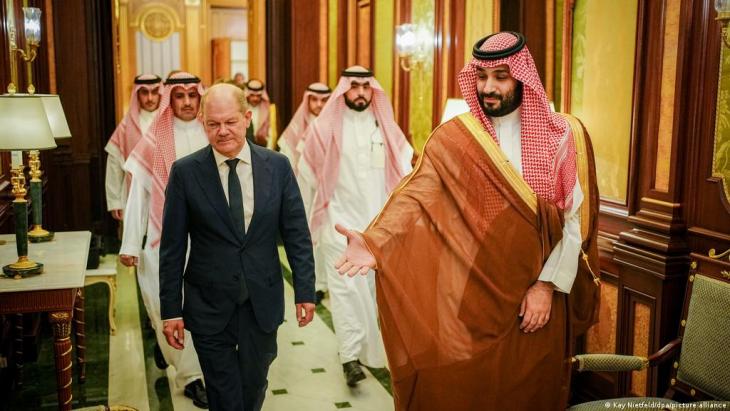 "We discussed all questions concerning civil and human rights," the German chancellor said following the talks in Saudi Arabia's port city of Jeddah on day one of his first official visit to the Arabian Peninsula.

Answering a journalist's question, Scholz said: "That's the way it should be. And you can assume that nothing has been left unsaid that needs to be said."

Scholz also said that he had raised the issue of freedom of expression, but gave no further details.

MbS has been blamed by U.S. intelligence for ordering the murder of Khashoggi. The crown prince denies having authorised the crime.

The murder led to the crown prince being largely isolated internationally, including by Germany.

A meeting with U.S. President Joe Biden in Jeddah, as well as a trip to the European Union in July, during which he met French President Emmanuel Macron in Paris, have initiated a normalisation of his relations with Western leaders.

Biden also asked the crown prince about the murder of Khashoggi, adding that the Saudi leader had once again rejected responsibility for the crime.

Scholz's visit has been seen by observers to be part of the wider rapprochement.

Government spokesperson Steffen Hebestreit said when the trip was announced that the crime would "certainly play a role" in Scholz's talks with the Saudi leader.

Scholz is also set to travel to the United Arab Emirates and Qatar, where the World Cup will be held later this year.

Government sources asserted that while Scholz's tour of the Arabian Peninsula will be mainly about discussing ways out of Germany's energy crisis, he will also address the human rights situation and security issues.

It remained unclear whether agreements on the import of gas or, in the longer term, hydrogen from the region to Germany will be reached during the visit.

Scholz's government has not approved any arms exports to Saudi Arabia since it came to power in December, according to information provided by the Economy Ministry.

Before the change of government, 30 export licences worth € 2.52 million had been issued in 2021 despite a far-reaching export ban for the kingdom.

The former conservative-led government had largely stopped arms exports to Saudi Arabia because of the kingdom's involvement in the Yemen war, but also because of the Khashoggi murder.

On Saturday evening, Scholz is scheduled to travel on to the UAE, before heading to Qatar, with whom Berlin has been trying to secure a gas deal, on Sunday. Qatar will host the FIFA World Cup starting in November.    (dpa)

END_OF_DOCUMENT_TOKEN_TO_BE_REPLACED
Social media
and networks
Subscribe to our
newsletter