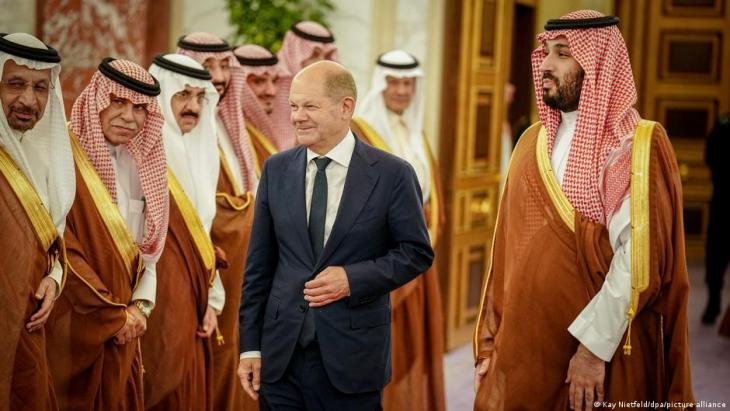 Scholz in Saudi Arabia and the Emirates
The autocrats' finest hour

Well before Olaf Scholz embarked on his first visit to the Gulf region, the German government was careful to play down expectations. The German chancellor's tour of Saudi Arabia, the United Arab Emirates and Qatar – in other words, of the new epicentre of global energy policy – was not to become "simply an energy shopping trip", government circles in Berlin were quick to assert.

Yet such justified caution was unable to conceal the fact that the German government is under immense pressure to succeed. Germany's economy urgently needs reliable and cheap alternatives to gas and oil imports from Russia, which have ceased since the Russian invasion of Ukraine. The Gulf states have these resources at their disposal, their young emirs and princes are highly cognisant of their dramatic increase in importance – and as a result they are acting with increasing self-confidence.

Saudi Crown Prince Mohammad bin Salman, MbS for short, embodies this new awareness like no other statesman in the Middle East at present. The de facto absolute ruler in Riyadh doubtless feels gratified by his rehabilitation following years of international isolation in the wake of the heinous murder of Saudi journalist Jamal Khashoggi, for which he was held responsible by the U.S. and Turkish intelligence services.

Given the new geopolitical realities arising from the Ukraine war, however, the power-conscious and authoritarian MbS is probably not only interested in personal recognition, but also in Saudi Arabia being taken seriously as a leading power under his auspices in a new, pluralistic world order.

Numerous visits by Western politicians to Riyadh prove that Saudi Arabia's crown prince has undoubtedly become a sought-after statesman on the global stage. U.S. President Joe Biden and former British Prime Minister Boris Johnson have both visited the homeland of Islam this year, while French President Emmanuel Macron received MbS at the Elysee Palace in Paris in July. 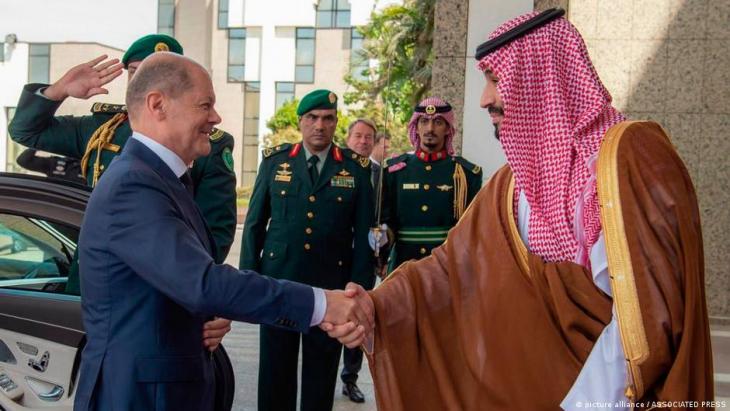 End of the ice age: the handshake between German Chancellor Olaf Scholz and Saudi Arabia's de facto ruler Mohammad bin Salman marked the end of the ice age between Germany and Saudi Arabia. "The Federal Republic is crucially dependent on a solid and functioning working relationship with Riyadh," writes Loay Mudhoon in his commentary. "Alluding to difficult partners in the Gulf is not very convincing, because autocracies are never easy partners." U.S. President Joe Biden and former British Prime Minister Boris Johnson have already paid visits to Riyadh this year

It is therefore important that the handshake between Scholz and Muhammad bin Salman marks the end of the ice age between Germany and Saudi Arabia. At the moment, the Federal Republic is crucially dependent on a solid and functioning working relationship with Riyadh. Alluding to difficult partners in the Gulf is not very convincing, because in truth autocracies are never easy partners.

Clearly, the German government wants to develop energy partnerships with Riyadh, Abu Dhabi and Doha – the sooner, the better. The aim is straightforward: to further diversify Germany's energy supply and prevent dependence on a single partner. This is a painful, yet necessary lesson from its failed Russia policy of the last 20 years.

Simply recognising this necessity is not, however, enough to provide convincing and, above all, sustainable answers to the energy policy challenges of the near future. What is needed is a new German policy with regard to the Gulf region. The magic formula is clear: diversification. After all, it is not only Germany, but the entire Gulf – in particular, heavyweight Saudi Arabia – that is looking for partners!

This should be the starting point for a new German policy towards the Gulf monarchies: all the Gulf states need German expertise, not only for the diversification of their own economic systems, but also for the realisation of gigantic modernisation projects. A clear admission of Germany's own economic interests would likely prove very effective.

This approach need not conflict with the inevitable search for common ground and Germany's "commitment to a rules-based international order". It is simply more credible than the usual pious utterances about human rights one hears bandied about in the capitals of Europe.

Nouara may be 65, but she is ready to join thousands of others who burn their ID and pay traffickers for the chance of a new life in Europe. Zineb Bettayeb reports END_OF_DOCUMENT_TOKEN_TO_BE_REPLACED

Education for girls and women is still possible in Afghanistan, says Reinhard Eroes of the Kinderhilfe Afghanistan initiative. In interview with Elisa Rheinheimer, he talks about ... END_OF_DOCUMENT_TOKEN_TO_BE_REPLACED

Locals in the Middle East have said European critics are showing bias and hypocrisy when they condemn Qatar. Observers agree that Qatar has had to deal with more criticism than ... END_OF_DOCUMENT_TOKEN_TO_BE_REPLACED

In Doha, Arabs from Morocco, Tunisia, Egypt and Algeria are gathering to celebrate the first ever FIFA World Cup to be held on Arab soil. The criticism from Europe? Over the top, ... END_OF_DOCUMENT_TOKEN_TO_BE_REPLACED

Canan Topcu came from Turkey to Germany as a child. In her essay, she describes how bothered she was by the racism she encountered in her country of origin when she travelled ... END_OF_DOCUMENT_TOKEN_TO_BE_REPLACED
Author:
Loay Mudhoon
Date:
Mail:
Send via mail

END_OF_DOCUMENT_TOKEN_TO_BE_REPLACED
Social media
and networks
Subscribe to our
newsletter