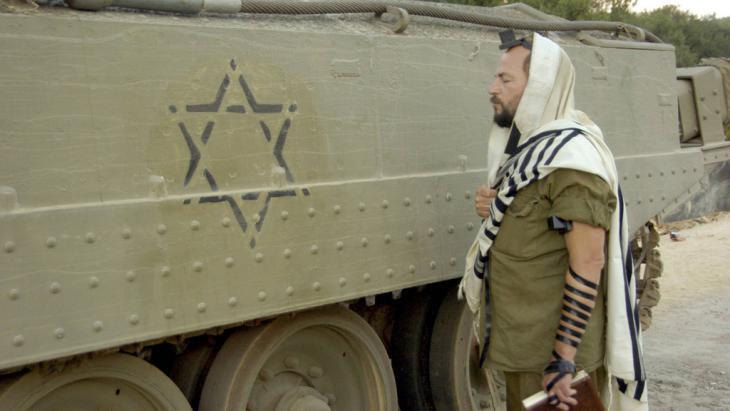 The Israeli military rabbinate has never had clearly defined competencies. Recently, there has been a growing number of protests against its increasing attempts to "sacralise" the army. By Joseph Croitoru

The growing tensions between secular and national religious Israelis have not passed the country's army by. National religious forces have been aiming to increase their influence within the IDF for several years – a consequence of their greater numbers in the combat units and officer corps and ultimately also a reflection of their growing power in the country's political sphere.

This conflict has now taken the form of a clash between the secular and the religious, manifested particularly in the armed encounters of recent years, including the most recent military operation in the Gaza Strip. The conjunction of religion and war is a cause of great concern to the country's secular sector, which now sees a threat to its dominant position in the army.

The military rabbinate is at the centre of the conflict. For decades, this unit was responsible mainly for caring for religious soldiers and monitoring the observation of basic religious regulations, which apply to all members of the military, whether strictly Jewish or non-religious – issues such as kosher food, restrictions on working on the Sabbath or Jewish holidays.

The first chief military rabbi, Schlomo Goren (in office from 1948 to 1971), also ensured that all soldiers took part in what are known as revival events. Since his time, members of the military rabbinate have in the period before and during the Jewish New Year holiday "informed" military personnel about religious Judaism and Jewish celebrations.

These events have repeatedly been criticised by the secular as an opportunity to exert ideological influence. However, this criticism was to no avail; Goren's legacy has remained untouched. Unlike him and his three successors in office – all of whom were immigrants – Avichai Rontzki, who was appointed chief military rabbi in 2006, was not only born in Israel but was originally not religious. His return to the faith (teshuva) was also strongly politically motivated, with Rontzki joining the militant settlers' movement and co-founding the settlement of Itamar south of Nablus in 1984, where he has been the local rabbi ever since. 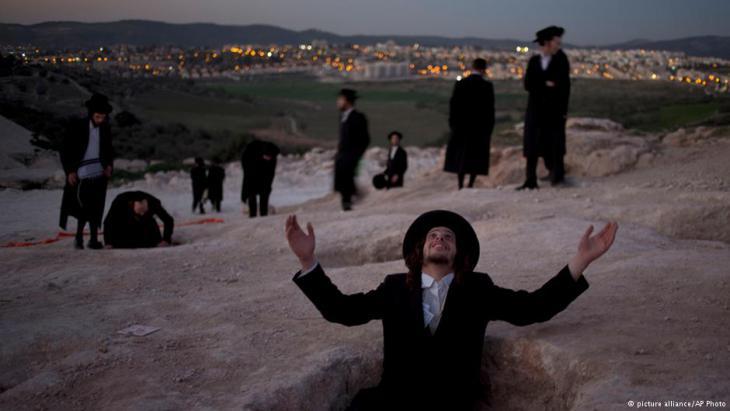 An ultra-Orthodox Jewish man raises his hands during a protest against construction of a new housing project at a site that protesters claim contains ancient graves. "The conjunction of religion and war is a cause of great concern to the country's secular sector, which now sees a threat to its dominant position in the army," writes Joseph Croitoru

Rontzki's appointment as chief military rabbi was apparently intended to help bridge the gap that was opening up at the time between the national religious settlers and the military.

Yet instead of working towards reconciliation, Rontzki caused polarisation by sending his fast-growing team of helpers to the front lines to instil a religiously tinged fighting spirit in the soldiers.

In the 2009 Gaza War, they not only distributed prayer shawls and brochures with indoctrinating religious content to secular combat soldiers, but also boasted about doing so on camera. A film showing such scenes and translating the military operation in Gaza into a kind of Jewish holy war caused a nationwide scandal. Rontzki was vehemently criticised for his "missionary campaigns" and was forced to resign in 2010.

Warnings of a "sacralisation" of the army

Under his successor Rafi Peretz, who was also expected to encourage constructive dialogue, the conflict appeared to die down. Peretz, regarded as moderate despite close relations to settlers' circles and the first clean-shaven chief military rabbi, helped the military rabbinate to disappear from the headlines again. Its absence was, however, only temporary.

Only a year into his office, in 2011, the rabbinate decided that religious soldiers were allowed to refuse to take part in concerts by military bands at which female singers performed (strictly religious Jews regard public appearances by women as indecent). This decision caused uproar on the secular side, as did the compulsory military rabbinate excursions for all soldiers, which included visits to the graves of famous rabbis.

When the military rabbis issued a brochure in 2012, stating that religious law was above that of the secular state, secular critics decided that things had gone too far and began to warn of a threat of the army being "sacralised". Although the chief military rabbi stood by the authors, his staff had the publication removed from the military rabbinate's website in response to the criticism. Again, this was only a temporary development; the brochure is now back online. 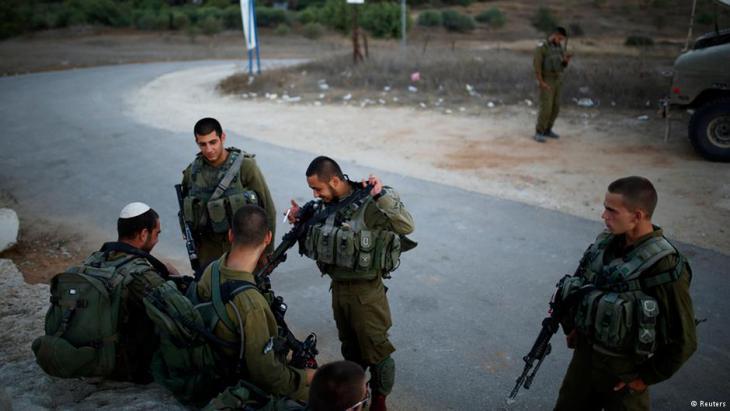 According to Joseph Croitoru, during the recent military operation in Gaza, all combat soldiers received a brochure "comparing their deployment with the Jewish people's struggle to survive in biblical times – and not failing to remind the reader of the Shoah in the same context"

On another problematic issue, Peretz once again followed in his contentious predecessor's footsteps. He continued to abide by Rontzki's wish that the military rabbinate be granted the additional responsibility of maintaining a "Jewish consciousness" in all soldiers.

Following a long internal struggle over competencies, the army leadership agreed to this demand at the end of 2013 – to the annoyance of the secular-dominated army education department, which has since been responsible only for the general issue of "Jewish identity".

The military rabbinate interprets its new mandate as it sees fit, starting another controversial campaign, for example, during the recent military operation in Gaza. All combat soldiers received a brochure comparing their deployment with the Jewish people's struggle to survive in biblical times – and not failing to remind the reader of the Shoah in the same context.

In addition to mentioning King David as a great military commander, the brochure focused in particular on the biblical hero Samson. His "combat mission" against the Philistines in Gaza and his self-sacrifice glorified in the utterance "Let me die with the Philistines!" were presented as a shining example to the combat soldiers. "In these very days, we are writing a new chapter of the Bible," claimed the authors, praising Samson's legendary heroic deed of carrying the Gates of Gaza all the way to Hebron – a fusion of combative religious ideology with one of the most important symbolic sites of the militant settlers' movement.

Other than in the liberal left-wing newspaper "Haaretz", there was barely any criticism in Israel of the military rabbinate's latest venture, unlike during Avichai Rontzki's time in office. On the contrary, the right-wing pro-government newspaper "Israel Hayom" even welcomed the mass distribution of Jewish ritual objects and prayer books to secular combat soldiers during the most recent ground offensive. The action could not be referred to as a missionary campaign by national religious forces, the newspaper claimed, because thousands of soldiers allegedly asked for them.

Home
Print
Newsletter
More on this topic
Israel's crisis politics: On hope and despair in the Middle EastInterview with Daniel Barenboim: "The world is suffering from a lack of leadership"Essay by Tony Klug: Two states – by design or disasterInterview with Yehuda Shaul: "The treatment of the Palestinians is the biggest threat to Israel"
Related Topics
Gaza War, Israeli-Palestinian conflict, Middle East peace process
All Topics

Apparently it is possible to write about the Holocaust and the crimes of colonial powers without downplaying anything. In her latest book, Charlotte Wiedemann focuses on the ... END_OF_DOCUMENT_TOKEN_TO_BE_REPLACED

The Palestinian militant organisation Hamas, with Hezbollah's help, is building up a military presence in Lebanon, the ultimate consequences of which could be devastating, writes ... END_OF_DOCUMENT_TOKEN_TO_BE_REPLACED

With his fist bump greeting for a man he previously called a pariah, US President Biden has paved the way for Saudi Crown Prince Mohammed bin Salman's return to the international ... END_OF_DOCUMENT_TOKEN_TO_BE_REPLACED

Asked about the Shoah, Palestinians often bring up the Nakba, the displacement of Palestinians associated with the founding of the state of Israel. An Israeli Holocaust researcher ... END_OF_DOCUMENT_TOKEN_TO_BE_REPLACED

Foresight is needed to turn the tide of German policy. Being independent of Russia must not lead to dependence on authoritarian regimes in the Middle East. By Kristin Helberg END_OF_DOCUMENT_TOKEN_TO_BE_REPLACED

For many years, world-famous conductor Zubin Mehta has worked tirelessly to strengthen relations between Arabs and Jews, sponsoring projects such as "Road to Recovery", which is ... END_OF_DOCUMENT_TOKEN_TO_BE_REPLACED
Author:
Joseph Croitoru
Date:
Mail:
Send via mail

END_OF_DOCUMENT_TOKEN_TO_BE_REPLACED
Social media
and networks
Subscribe to our
newsletter