The stunning coastal city of Saint-Louis is at greater risk from rising sea levels than any other in Africa. A rich architectural heritage and traditional coastal livelihoods are vanishing under the growing tide. By Joost Bastmeijer 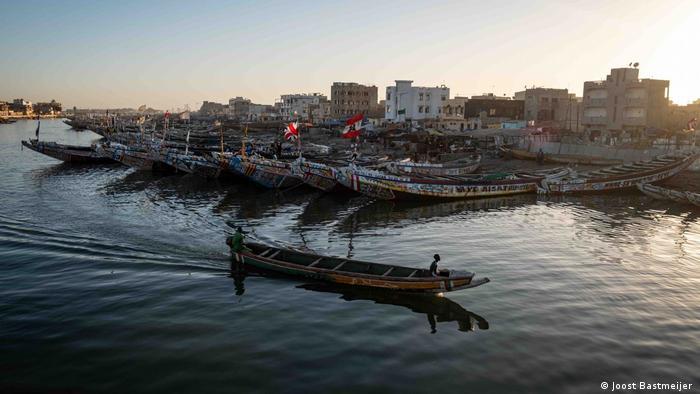 At the water's edge in Senegal: this is the port of Saint-Louis in Senegal. The city was built in the 17th century for its strategic coastal position at the mouth of the Senegal River and was the capital of French West Africa until 1902. But these days, its proximity to the ocean is a threat. The UN has warned that the city is at greater risk from rising sea levels than any other in Africa 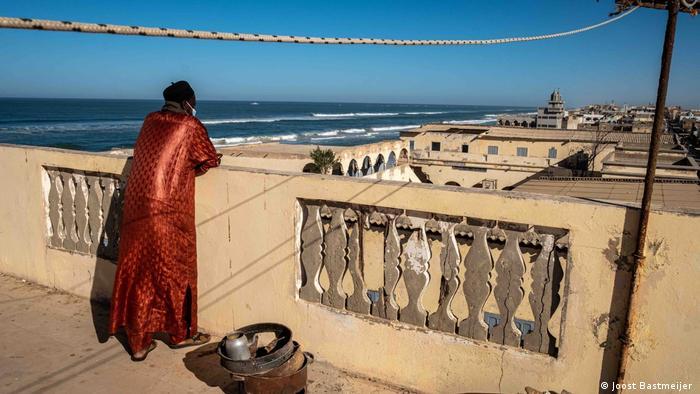 World Heritage washed away: Mouhamadou Moussa Gaye, a schoolteacher, looks out over Guet Ndar, a district of Saint-Louis and a UNESCO World Heritage site. Guet Ndar occupies a long peninsula called the Langue de Barbarie that separates the estuary of the Senegal River from the open ocean. The school where Gaye used to teach, as well as mosques and homes on the peninsula, have already been lost to coastal erosion 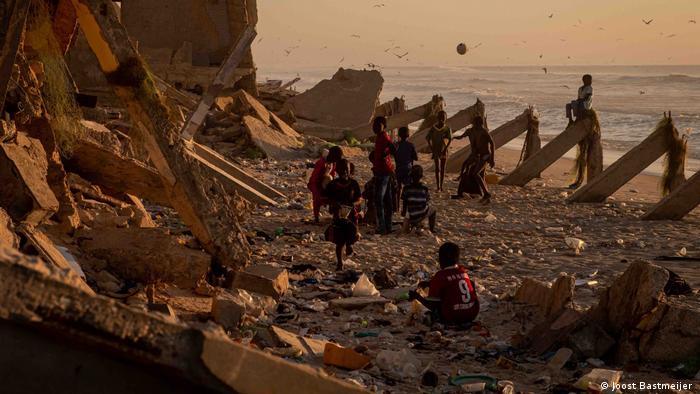 A school in ruins: being designated a UNESCO World Heritage site doesn't mean much to Mother Nature. Here even the most basic public facilities can fall prey to the ocean's water. The pupils who used to attend the destroyed school have been transferred to three other schools in the city. Yet when lessons are over, they still come to play among the ruins of their old classrooms 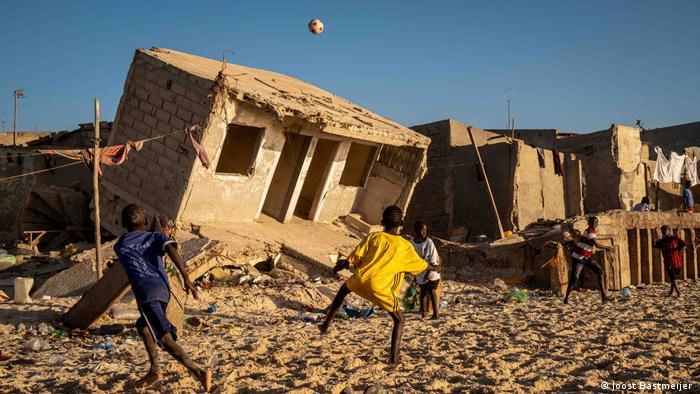 Erosion takes homes: in 2003, the authorities dug a channel through the Langue de Barbarie so water could flow out of the estuary and away from Saint-Louis when the Senegal River threatened to flood. But their bid to protect the city backfired. Water flowed both ways, eroding the banks of the channel until it opened into a huge gulf, taking 800 metres of the Guet Ndar beach, as well as neighbouring villages, with it 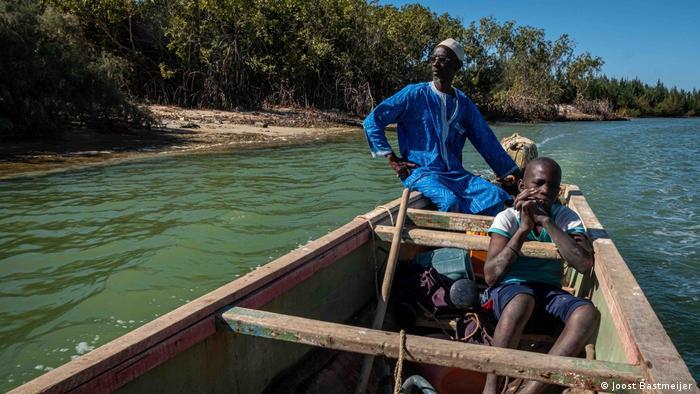 A vanished village: Ahmet Sene Diagne used to live in one such village. Now, as he navigates the water along the coast from Saint-Louis in a "pirogue" with his son, he recalls how he went to the town hall to warn against excavating the channel, but officials didn't listen. "They didn't believe me," Diagne says. "They asked me to show my diplomas, but I don't have any. I live in the bush" 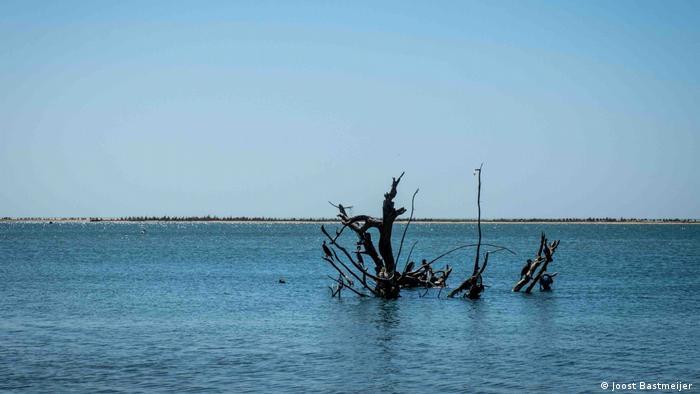 No future in fishing: now, all that can be seen of Diagne's village is the stump of a tree that once stood in the central square — the tree that Diagne got married under. His family is of the Lebu ethnic group, who have fished for generations. Now their coastal communities have been destroyed and Diagne says there's no future in fishing. He hopes a good education will give his sons other options 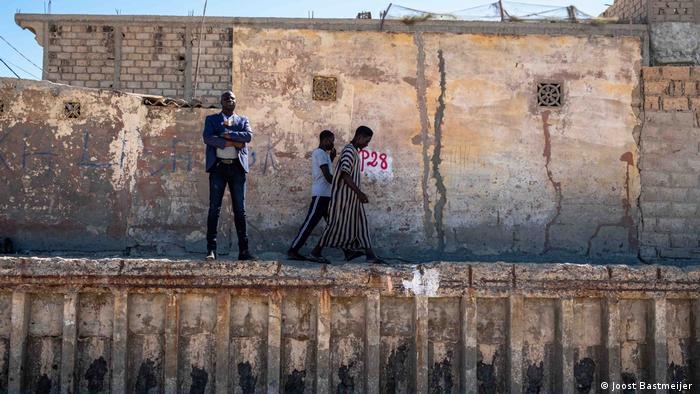 The old colonial seawall: Latyr Fall, deputy mayor of Saint-Louis, stands on the old seawall that once protected his city. "It dates back to 1930 and was built by the French colonists," he says. But he is unequivocal that the threat to Saint-Louis is from climate change – and the sea level rise since colonial times calls for new measures to protect the coast. "The wall no longer protects us" 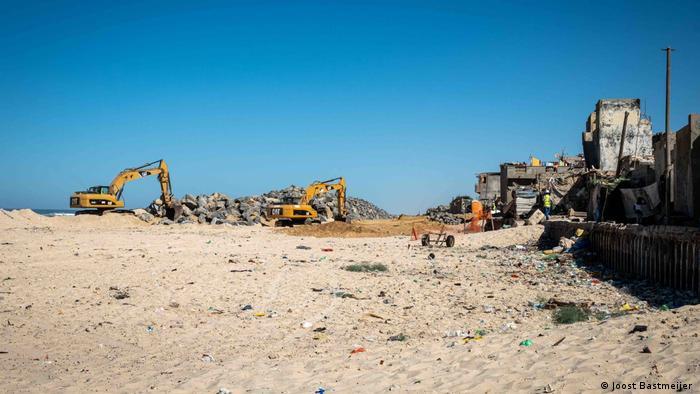 Building a new protective dyke: the Senegalese government is building a new dyke that will be 3 kilometres long and 20 metres wide to protect Guet Ndar from further coastal destruction. But to accommodate this massive structure, many of the remaining houses on the endangered coastline will have to be demolished to make room for the new construction project 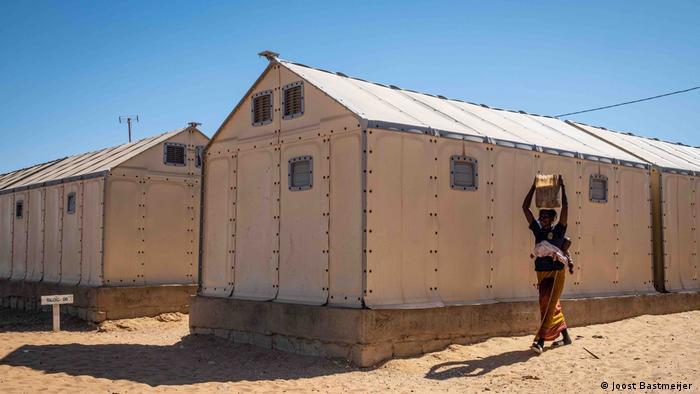 Lives displaced far from the sea: with funding from the World Bank and France, shelters have been built to house those whose homes have already been lost to the rising tide and those displaced to make way for the dyke. Some 10 kilometres inland at Diougop, the displaced residents complain the shelters are sweltering during the day, cold at night, and there aren't enough toilets 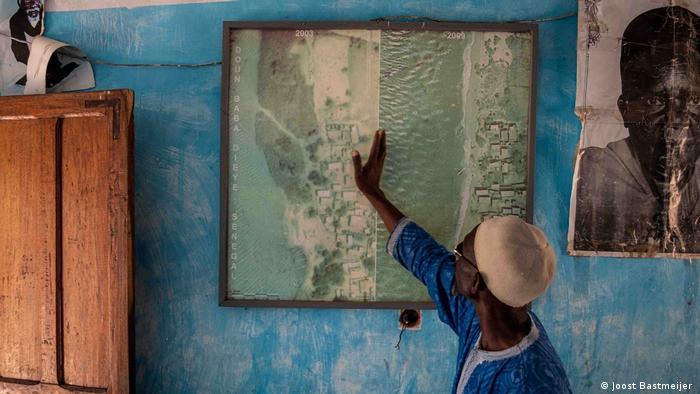 Born from the water: Ahmet Sene Diagne now lives in a settlement called Jel Mbaam, where he grows and sells his own produce. On the wall of his home, hangs a map showing where his village used to be before it was submerged. He still doesn't trust the authorities to protect the coast. "They should involve the people from here in their plans because we are the ones who live here, and were born from this water," he says

END_OF_DOCUMENT_TOKEN_TO_BE_REPLACED
Social media
and networks
Subscribe to our
newsletter